That was so three months ago, wasn’t it? Today, the Japanese 5-year interest rate is 0.02% barely above zero. Imagine putting your money for 5 years in a Japanese Government bond and getting virtually zero interest for those five years. Awful, right?

Wrong. Because the German 5-year interest rate is now negative, yes – 0.005%. So if you put your money for 5 years in the German Government bond, you will get less money back at the end than you put in. This is true of the entire German maturity structure from 1 year to 5 years. When on earth does a fixed income instrument give you less money back at maturity than what you put in? When the economy is falling off a cliff and investors are extremely afraid.

The New Year has brought in a violent resurgence of deflation fears to Europe and this Tuesday featured literally a panic among investors. The German 30-year rate actually fell below the Japanese 30-year rate, something no one would have imagined earlier. Japan was moribund and Germany was the resurgent economy, remember? 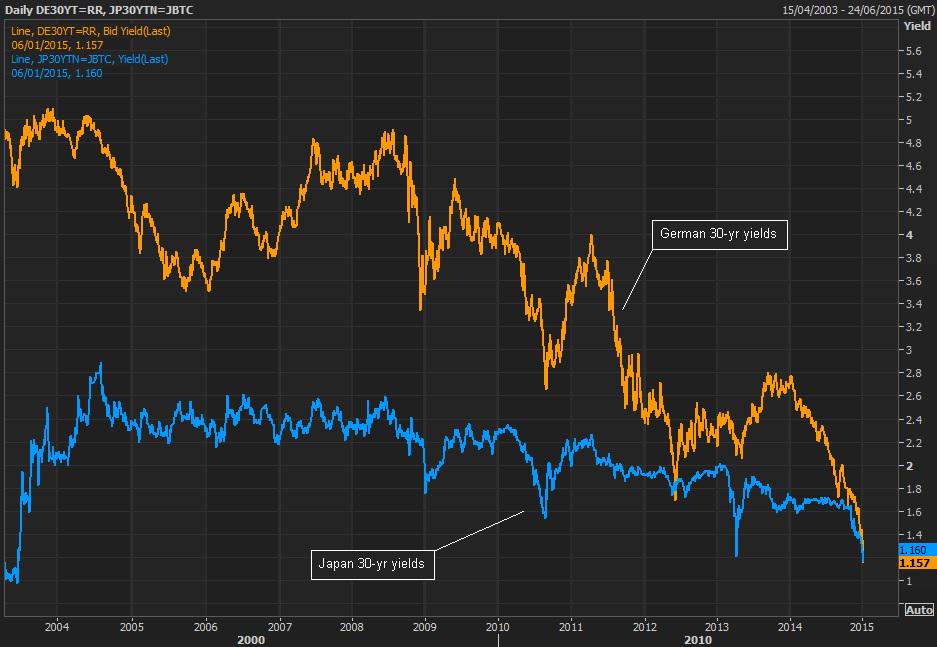 Europe seems to be falling fast into a deflationary trap. What brought this on? First & foremost, Europe’s complete inability to come together and address its problems quickly & effectively. They are different nations bound together under an artificial & utterly stupid common currency structure that they are determined to preserve. They have applied bandaids for the past 5 years that alleviated the superficial burns without quelling the fire within.

And this week, the first European country to exhibit problems became a problem again. The actions of the European Union in Greece have made Greece a sicker & weaker economy. The debt load of Greece has actually increased over the past 5 years while their growth has slowed materially and unemployment has spiked. Read what Carl Weinberg of High Frequency Economics said on Bloomberg Surveillance this past Monday:

Interest rates fell off a cliff the next day with German rates falling more than others. Rates in America fell sharply as well with the US 30-year rate falling to all-time lows. 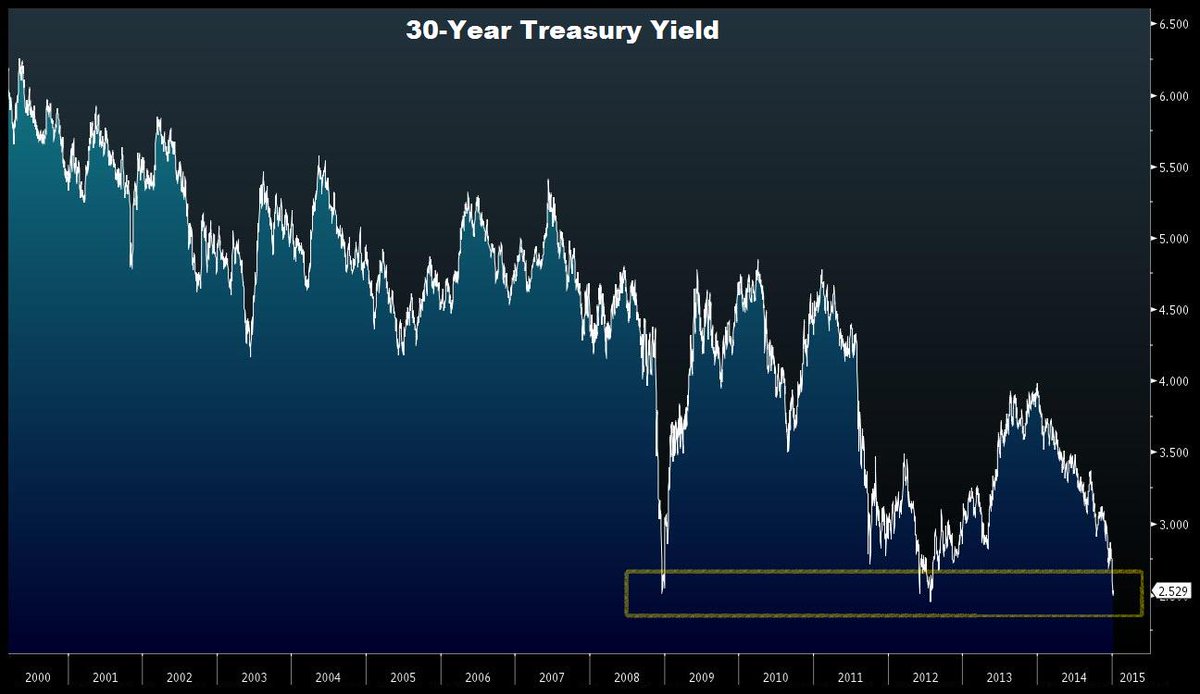 But why American rates? After all, America is felling awesome, right? The US economy posted growth of 5% in the third quarter of 2014, a rate that rivals growth in China & India. That’s why they call it contagion. In today’s highly integrated financial system, contagion spreads through financial firms. And how are Europe’s banks doing? 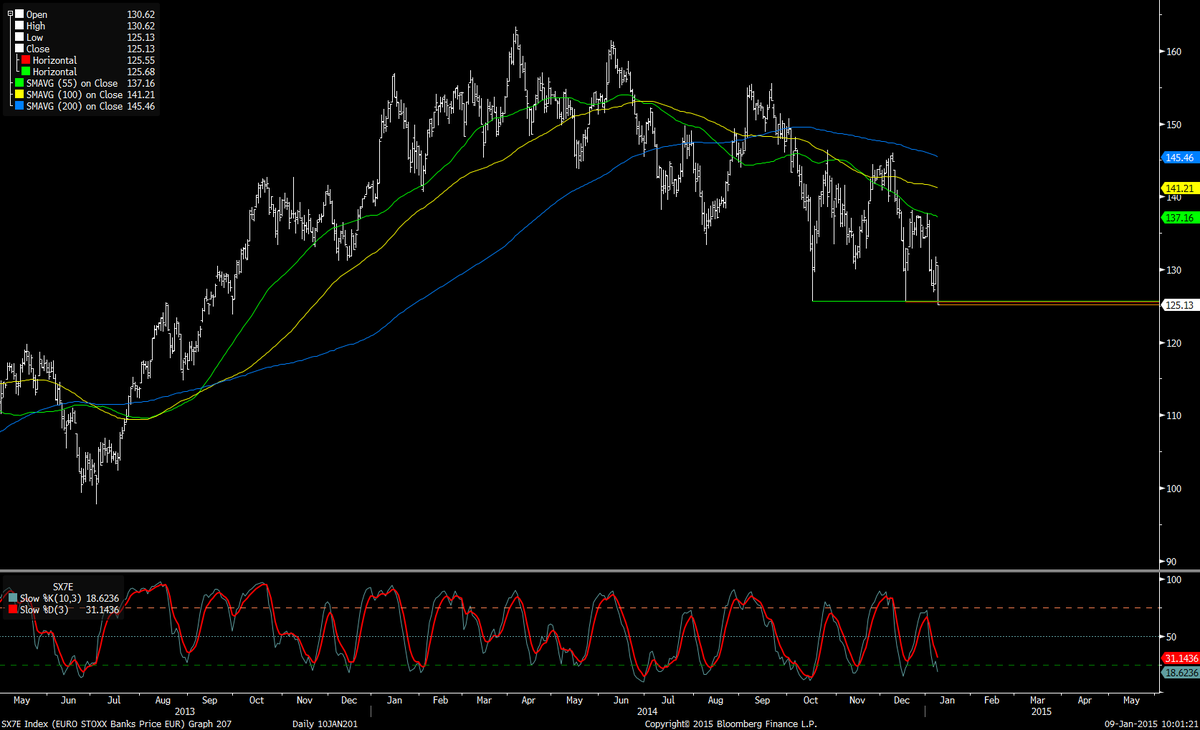 True, Europe’s banks never took the medicine in 2009 the way American banks did. But that is not what drove them down this week, in our opinion. Read what Carl Weinberg said on Monday on Bloomberg Surveillance:

Remember Lehman Brothers? That bankruptcy wiped out 140 billion dollars of bonds, corporate bonds. Action by Greece could cause a default of 180 billion Euro or 212 billion dollars of Sovereign bonds. That’s mega-Lehman if not Lehman-Squared as some have begun calling it. Greece will elect its new government on January 25 and the Syriza party, the party that wants debt forgiveness, is leading. Merkel’s Germany has publicly taken a rigid no-deal position. The markets still believe that a face-saving solution will be found and they are optimistic that ECB Chairman Draghi will launch a US-style Quantitative Easing on January 22 that will include buying Greece government debt. If that happens, the problem will be shelved for now.

Until now, the U.S. Economy has been a fortress in the face of European contagion. But something seems to be going awry. Goldman’s global economic surprise index has fallen to its lowest since Oct. 1, 2014.

And the U.S. Stock market, that robust beacon of American recovery, has been hit hard this week. The decline is not serious in itself. What is much more serious is the violence of the movements. That is suggestive of fear, not just of fear but, in a FDR fashion, fear of fear itself. This is not just word-play.

His chart shows that the previous four occasions were crisis periods as well. The only real solution can come from what FDR said in the depression of the 1930s – that we need to address the fear of fear.  To do that, we need to address what created the surge in fear in Europe. That surge began when Europe and US imposed financial sanctions on Russia and its oil sector. Russia is a large trading partner of Germany & Europe. Imposing sanctions on your massive trading partner is the same as imposing sanctions on yourself. Just look at the charts above to understand what has happened to Germany since the sanctions. What is worse is that German people & Europeans in general have become fearful of potential conflict with Russia, a condition once again reflected in German bond yields. That is why financial bandaids like QE will do nothing to help the underlying crisis.

Europe gets it as France’s Hollande demonstrated in his recent meeting with Putin. But the ball in not in his court. It is with Angela Merkel and Germany. And that’s scary. Germans are highly intelligent but their history shows they are not smart, not smart enough to avoid wars. Merkel is fighting on two fronts right now, Greece and Russia. She could handle Greece but she will not be able to handle Russia. Why?

Europe and America have won the first battle against Russia. The Russian ruble has almost crashed and the Russian economy will contract this year. But Russians are masters of protracted wars. The first battle has been won via America’s nuclear weapon of finance. But Putin has another weapon with him, a weapon that could spread havoc in Europe and via contagion to America.

Look at what fear of Greece default has done to global markets? What if Russia stops paying interest on its foreign currency bonds, not on Russian sovereign bonds but on Russian corporate bonds? European, American and global investors hold over $600 billion of Russian corporate bonds. Even a technical default on these bonds would be catastrophic to the global financial system. This may be why the U.S. stock market is literally begging for oil to stabilize, not go up but simply stop falling.

Well, the contagion has continued and gotten worse in the past three months. How much worse will it get? We will find out together.

But what about China, some of you might ask. A recent report by Bank of America warns of “Deflation, Devaluation, and Default” looming in China in 2015. That is a story for another time. Suffice it to say here that deflation in Europe will not cured by anything from China.

Why is deflation so scary? As we wrote back in October, 2014:

That is the warning global bond markets are flashing this week.