What tells us that the dovish markets-supporting Yellen is back? This week’s 7 bps bull steepener in the 30-5 year curve & the outperformance of leveraged closed end funds over unleveraged funds of that same class. Look at the 1-week chart of leveraged high yield UTG over unleveraged HYG:

Look at the opening gap on Wednesday, Thursday & Friday morning as well as the big outperformance over the week. QED, we think. We saw a similar outperformance in closed end Muni funds over MUB this week.

What should happen when the Fed surprisingly goes dovish? 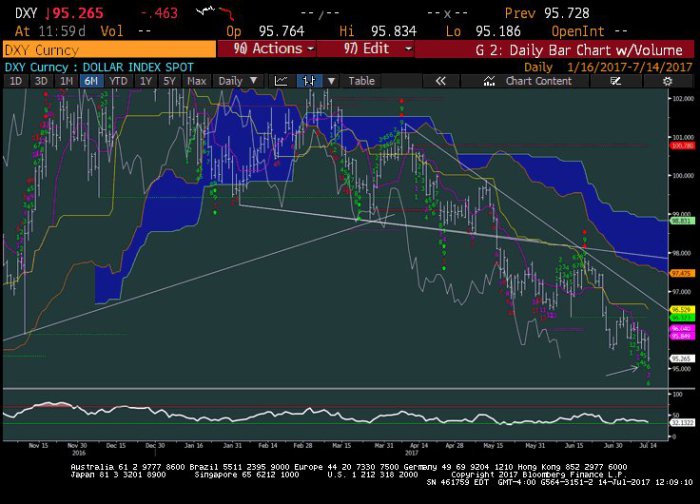 What should happen when Treasury rates fall & the Dollar weakens? Emerging Market Equities should explode and Gold & Commodity stocks should rise. Actually, everything should rise except the VIX, right?

Thus ended the 3-week consolidation launched by Draghi & amplified by Dudley on Monday, June 19. Once again, assets know how they spell relief – “Yellen”. Actually Yellen had no other sensible choice:

There is a lot of room between 2.4% & zero for Q2 GDP; so the lower progression in the above tweet is not going anywhere real bad. Not yet, at least. And not until credit starts underperforming.

Kudos to Carter Worth of CNBC Options Action for calling a decline in interest rates last Friday. But his second call Buy XLU Short SPY hasn’t worked out yet. That may because of last week’s terrific call by J. C. Parets that Momentum stocks would breakout relative to S&P.  FANGs did devour the S&P in performance this week. Kudos to @allstarcharts J C Parets. 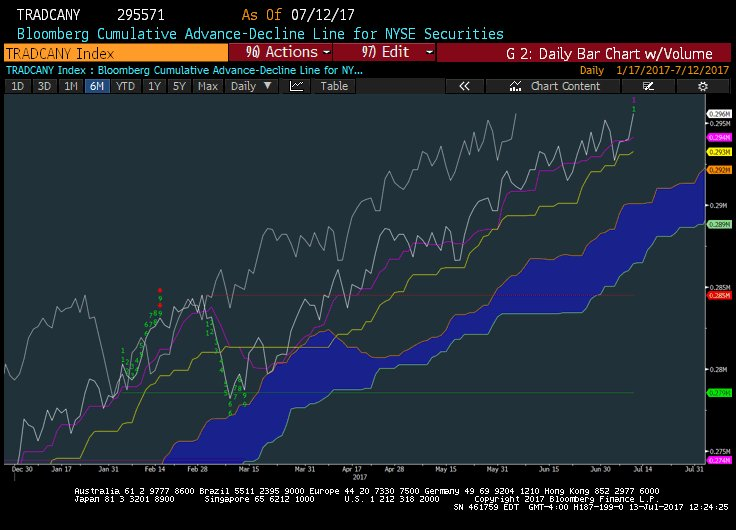 But the breadth picture is not as rosy as the above sounds:

We have not known Tony Dwyer of Canaccord to be a piker in terms of S&P price targets. He kinda proved to be one this week with 2510 as his target for year-end. Heck we could there next week. But to be fair to him, his real target is 2,800 for 2018. His clip below is kinda funny because on Monday July 10, his entire discussion was focused on rates going up and the 10 yr – 6 month curve going from 1% to inversion. But his case for 2800 is based on earnings and that case is only strengthened by a bull-steepening curve & lower Dollar.

Next week brings Options Expiration and that, with the Fed behind the market, could mean another up week.

What about the big move in Nasdaq this week? 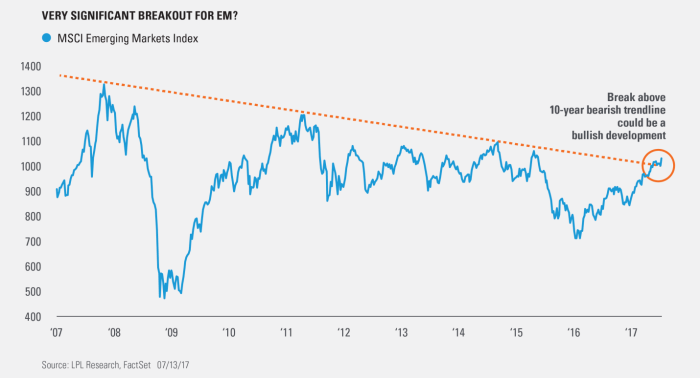 This week Oil was up 5%; last week Oil was down 4% and the week before that Oil was up 7%. This type of volatility is usually common to tops & bottoms. It is hard to imagine Oil is near a top after its harsh decline this year. It is not at a bottom either. But a technician who has been steadfast in his “don’t care” attitude to oil & oil stocks turned bullish on Friday & suggested buying XLE for a 10% rally.  One reason is a bullish divergence he saw in last week’s decline when S&P Energy made a new absolute low but not a relative low to the S&P 500.

Last week J C Parets was so negative on GDXJ that he thought the worst was yet to come. But look what he tweeted on Monday.

Kudos to him for being open minded & smart. GDX went on to close the week up 3% and NEM was up 4%. It is interesting that the candle in GDX was on Monday, the day before Brainard spoke and a day & half before the text of Yellen’s speech was released.

What now? If the curve keeps bull-steepening & Dollar remains weak, then Gold should have a tail wind. Where does GDX go? We have no idea but one very bullish opinion says: 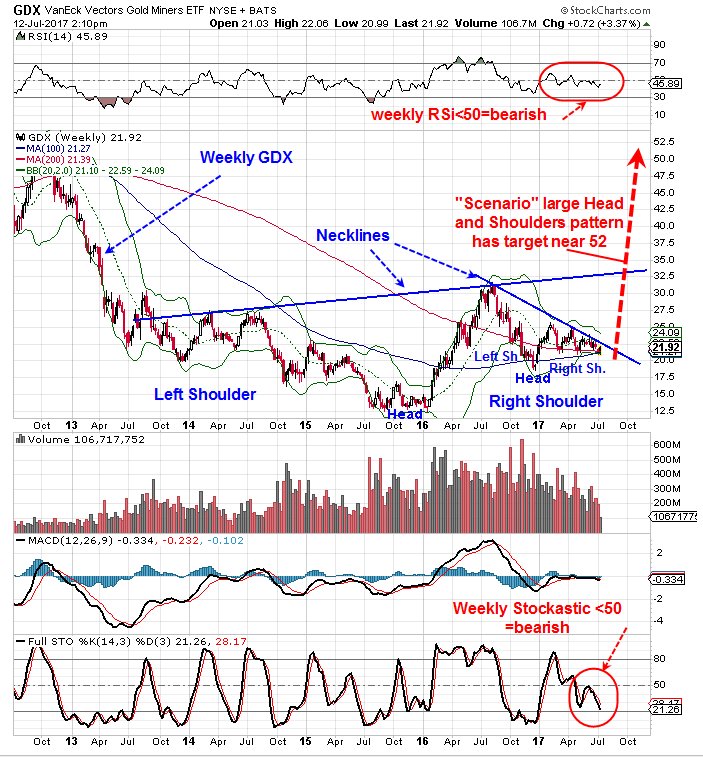 On Father’s Day we had featured a terrific film about a father’s dreams for his two daughters, a dream that took them from a rural village in ultra-male oriented Northern state of Haryana to gold medals in International Wrestling. The film is a true story about how the dream was realized. This film called “Dangal”(name of rural wrestling tournaments in Haryana) became a huge success in India. That was not surprising.

What was stunning was the reception Dangal got in China. When it finally ended its run in China last week, it had accomplished something no one could have ever believed let alone predicted. Dangal proved be a greater success in China; it was screened in more theaters AND Dangal got 70% higher ticket sales in China than in India.

For readers in America, Dangal is now on Netflix, perhaps an appropriate lead for Netflix earnings on Monday. Netflix is the ONLY way Americans can now watch Dangal. Is that in itself a reason to buy Netflix? Jokes aside folks, if you care about young girls participating in sports or if you care about true breakout of rural low income women, watch Dangal on Netflix.