The biggest statement of the week might have been Larry Kudlow saying that a White House meeting “ruled out any currency intervention“. The Dollar immediately rallied. An hour or so later, Treasury Secretary Mnuchin said he is “not going to advocate a week Dollar policy as Treasury Secretary“.

But in the evening after market, President Trump sounded two-handed about the Dollar. On one hand, he said he was happy & proud about the strong Dollar and how that reflected the robust strength of the US Economy relative to others. But he also sounded unhappy at how the strong Dollar was making America uncompetitive.

The unqualified & almost stern statements from Kudlow & Mnuchin & the contrast with President Trump’s “yeah but” statement made us wonder whether a deal had been struck by Kudlow/Mnuchin with Fed Chairman Powell & FOMC. After all, the Fed has already come towards an easing mode with almost 50 bps built in for the next two FOMC meetings. So adding a currency intervention on top of their imminent easing might have been too tall an obstacle for them. Is that why Kudlow & Mnuchin made such unwavering & unqualified statements about ruling out currency intervention? Who else could they have been speaking to? Not the President & not to the stock market because the US stock market would love a weaker Dollar.

The Dollar was already enjoying a 1% up week when Kudlow spoke & that strength impressed Carter Worth of CNBC Options Action to put a buy on UUP, the Dollar ETF.  He said UUP has already broken above the trendline, then checked back to the trendline and is now pivoting above. He also saw a wedge breakout & an inverse head & shoulders formation in the UUP chart. All very impressive sounding as you can see & hear below:

On the other hand, The Market Ear noted: 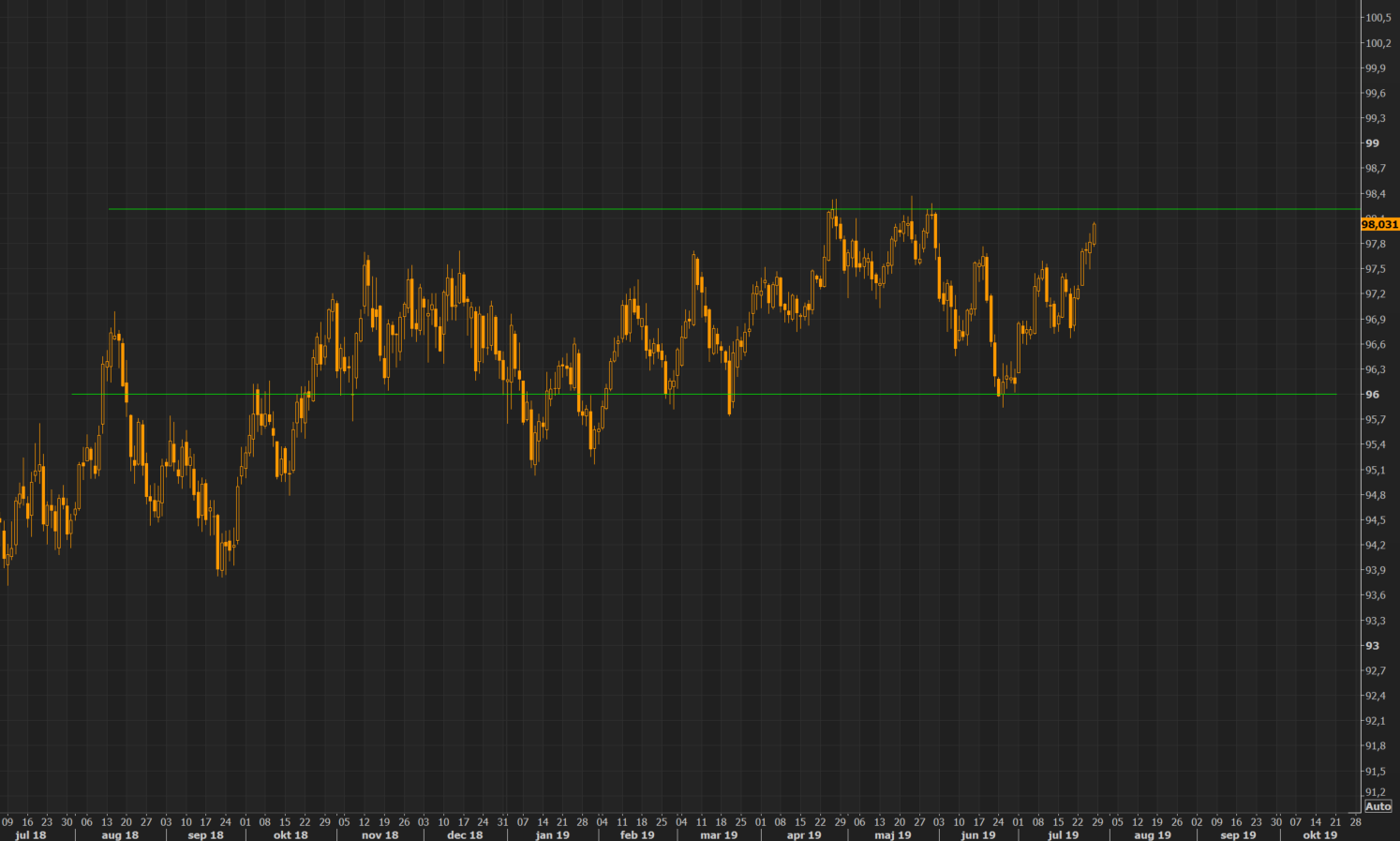 Next week may decide whether the Dollar maintains its range by falling back or breaks out of this range with an up move. And that will be determined by what Fed Chairman Powell does & says on Wednesday.

While everyone is focused on whether the Fed cuts by 25 bps or shocks the markets by cutting 50 bps, we think it is much more important to focus on how the Dollar reacts to the FOMC action & Powell’s presser. Why? Read the succinct discussion by Larry McDonald in his interview:

We sincerely hope that Chairman Powell gets it. We think statements of Clarida & Williams suggest that they get it. And, of course, President Trump gets it. But we realize that, at least this time, the Fed & Chairman Powell need to get the credit for lowering rates & weakening the Dollar (without saying so, of course). The Fed does not wish to be goaded publicly to weaken the Dollar by lowering rates & that, we hope, was the impetus for that uncharacteristically clear & unwavering statement by Larry Kudlow.

Will the Fed cut by 25 bps or by 50 bps next week? Rick Rieder of BlackRock told CNBC Closing Bell that he would bet that the Fed cuts 25 bps next week and 25 bps in September but sees a 40% chance that they cut by 50 bps next week. He pointed out that ” … when you cut … , you are supposed to shock the system & be faster & more aggressive … “.

Remember Bob Michele, JPM Asset Management Head of Fixed Income, who said last week that the 10-year yield could go to ZERO! What did he say on Friday on BTV Real Yield about what the Fed will do?

What did JPM’s Bob Michele say about Friday’s strong data & its impact on the FOMC decision next week?

But was Friday’s Q2 2.1% number as solid as universally described on Fin TV? You know who would say no.

Savings rate drawdown is not so bad as long as real incomes are going up, right?

So what about the cash buying we used to hear about? 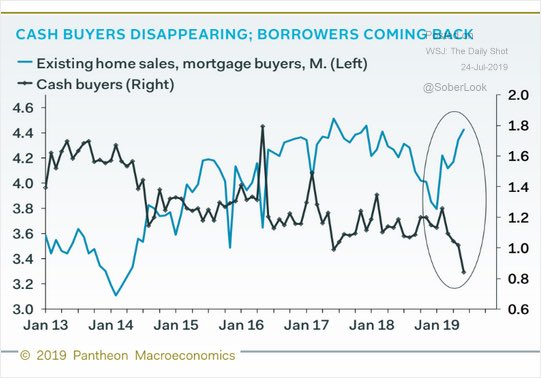 On the other hand, as Rosie pointed out: 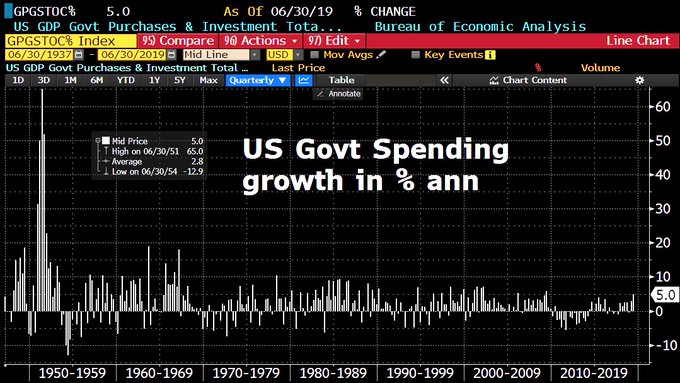 That brings us to this week’s really really big news.

The above Holger chart shows how critical US Government spending was to getting a 2-handle Q2 GDP number. Now you get how big this week’s big news was?

The news that the Trump Administration & the Democrat House shook hands on a two-year resolution about the debt ceiling & higher levels of Government spending & deficits. First & foremost, this confirms our oft-repeated statement that President Trump is, both at heart & in his head, a FDR type of guy & in sync with blue collar Democrats. Who hates this bill? The conservative Republican Debt vigilantes & the Fiscal caucus. They just don’t get it.

Well, the US economy does not need to “find” such a sovereign! We elected one in 2016. Thanks to the debt ceiling & spending bill, we might see a sustained jump in Government spending all the way into the 2020 election. And if Pelosi needs another constructive House victory, she & Schumer might work with President & McConnell to deliver an infrastructure bill in early 2020.

Look what PM Modi did in India about a year before his election – increased government spending to benefit the poor & the lower middle class. We expect to see a similar push in middle America. You combine that with a rate-cutting campaign by the Fed, perhaps a somewhat weakened Dollar & we could see a strong stock market in 2020.

4. Draghi’s message to the Fed

German yields fell hard after the text of Draghi’s statement was released. The German 10-year yield fell to a minus 41 bps handle. Then Draghi began speaking & yields backed up in Germany & in the US.

Bob Michele used that back up to get into the German bond market, he said on BTV Real Yield on Friday. Then he added:

5. Treasury Rates – “… nothing but downside to yields”? 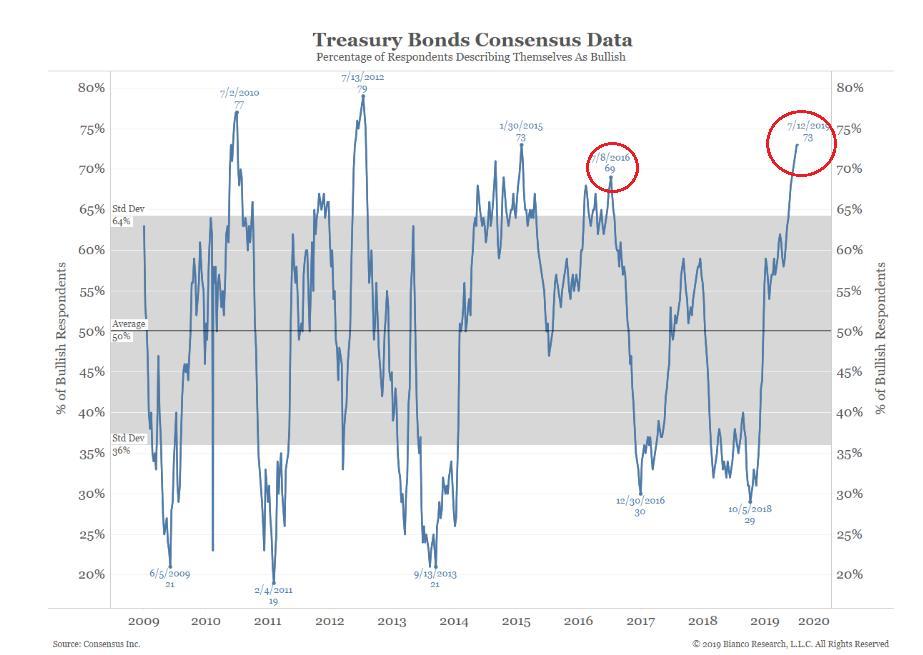 So what is a short term bearish target? 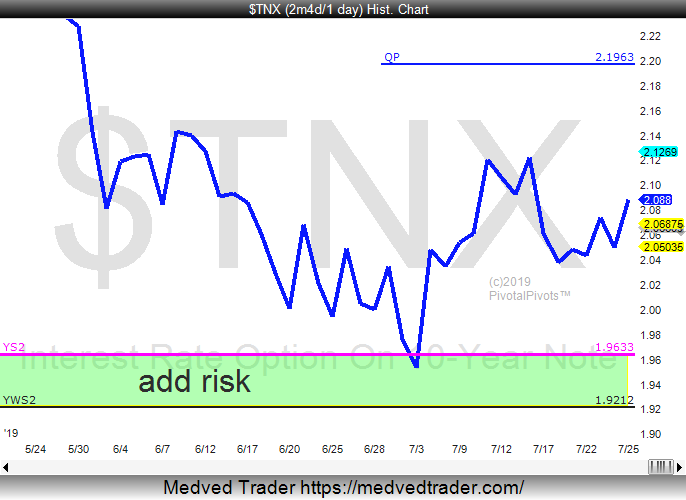 Now understand who Bob Michele is. He is not a strategist or even the head of strategy. No, he is the Head of JPMorgan Fixed Income Asset Management. That means he plays with big money, money that probably prevents him from adding to performance by small tactical plays. His real performance has to, we think, come from big bets.

His earlier big bet was, as we recall, in June 2019. That is when he turned from buying dips in credit to selling rallies in credit. Then last week he said he expects the 10-year yield to go to Zero, a stunningly bold statement for the Head of Fixed Income Asset Management.

Are 1-2 rate cuts of 25 bps enough to generate that amount of stimulus? Or will next week be a start of another ride down the slide in rates?

First the basic & sensible from Lawrence McMillan of Option Strategist:

What is the pain trade? Market Ear says, 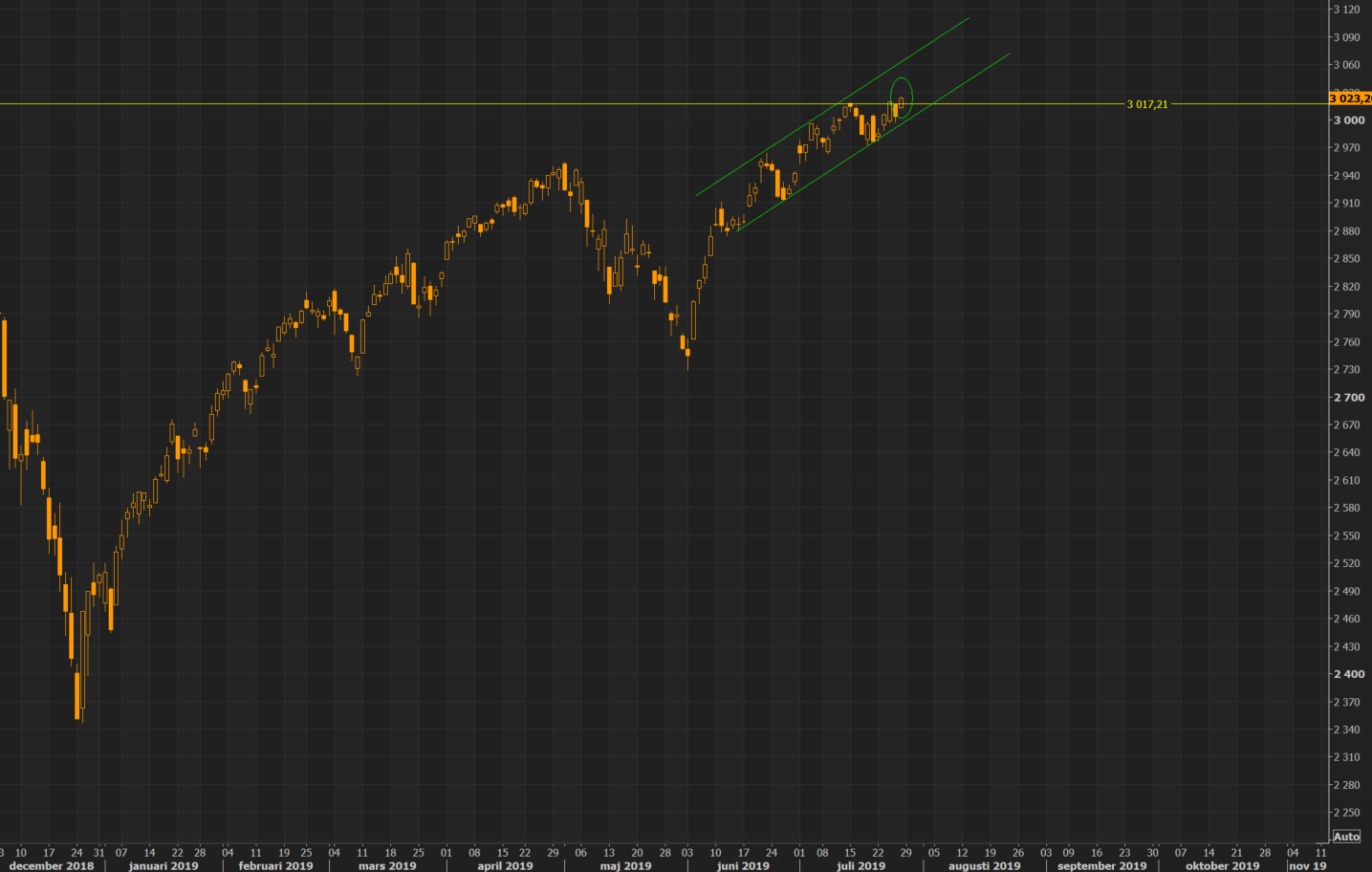 On the other hand, positioning at such extremes (courtesy of macro-ops.com) has led to turmoil: 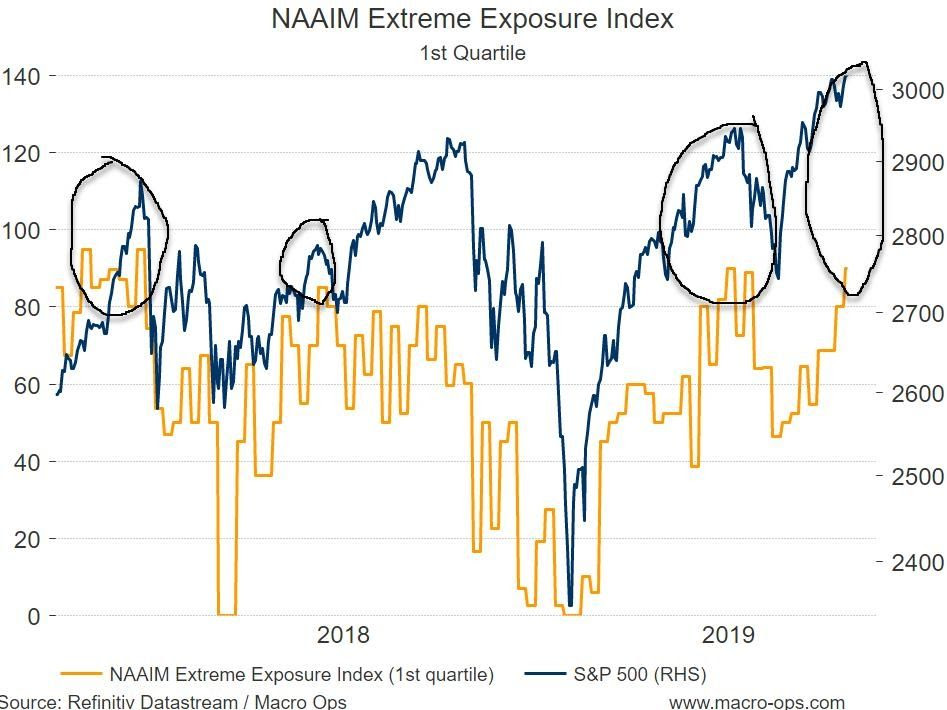 Of course the real question is what should one do after a 5% turmoil hits? Buy says Tony Dwyer provided credit has not shut down and assuming they are “NOT ALREADY TOO LATE”:

And what if the Fed does manage to weaken the Dollar? Again from The Market Ear: 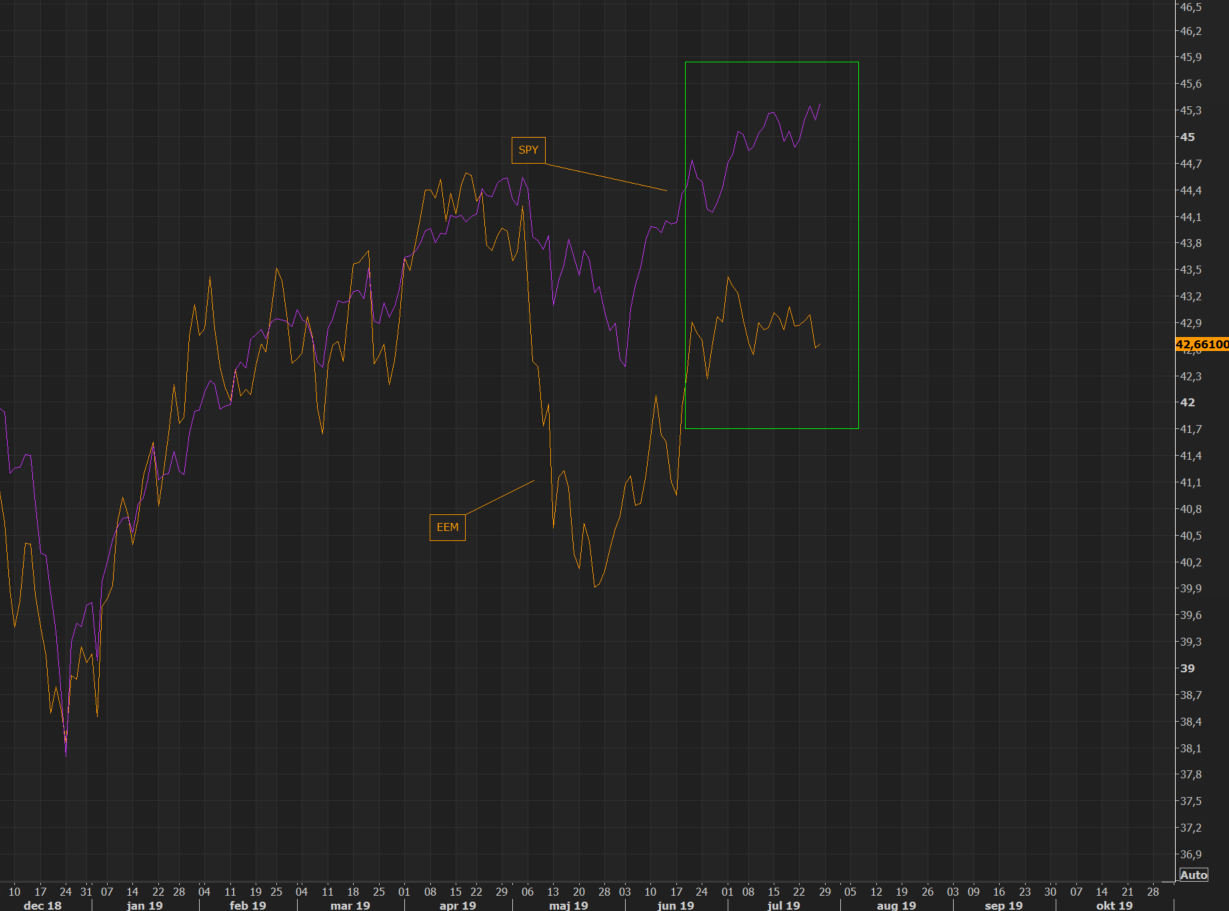 The strength in the Dollar didn’t just hurt EM but it also hurt Gold which fell by 70 bps on the week. The miners, GDX & GDXJ, fell by 2.4% on the week. But Silver rallied about 1% on the week which brings us to views of Larry McDonald: