No. We are not referring to Trump Supporters vs. Trump Detractors or Democrats vs. Republicans or Liberals vs. Conservatives. We are referring to an unprecedented divide that could actually get smaller in less than six months. 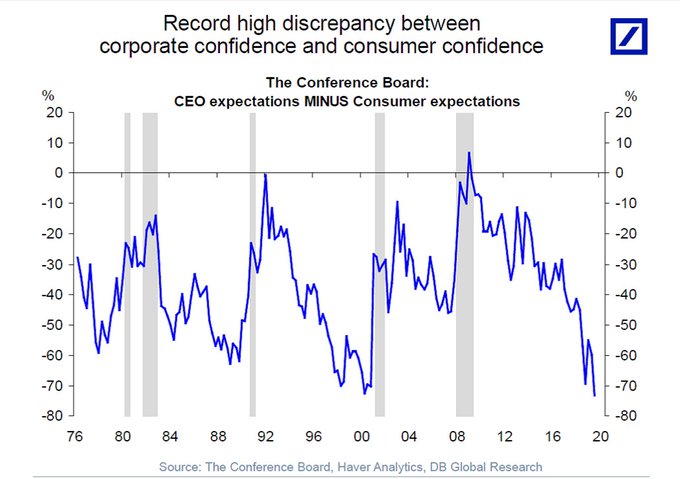 The big story in the above chart is not the consumer. Instead, the chart dramatically shows how frightened corporate CEOs are of the near term future. Yes, it is a story of disappearing margins & increased labor costs given the tightness of the labor market. But that the CEOs know how to handle. That stuff can distress them but it doesn’t frighten them, especially when interest rates are so low & when the Fed is adding liquidity.

Being simple-minded, we think CEOs are scared about what they see happening in global trade & especially about what happens to US-China trade fight. The uncertainty about tariffs is a big deal for them because it can be disruptive to their entire business. Then you have the Warren apparition.

Allow us to look forward 4-5 months to late March or April 2020. The impeachment circus would have ended by then, in a fiasco we think. That is really the message of both Mayor Bloomberg filing to enter the Alabama primary & ex-AG Erik Holder publicly contemplating entering the Democrat nomination race.  And on Friday, Congressman Devin Nunes, Ranking Member on the House Intelligence Committee formally requested that Re. Adam Schiff, Chairman of the panel, testify in a closed-door setting. And Rep. Jim Jordan has now been added the House Intelligence Committee. So Republicans might actually consider going on the offensive. Yes, we know the odds are against that. But you never know.

So ask yourselves, wouldn’t March-April be an excellent time for President Trump to announce that he was suspending the tariffs on China because of progress made & because the next disputes are more long-term in nature. Both countries could signal that the rapprochement would be, say, till the middle or end of 2021 to give both sides enough time to negotiate in good faith. This, we think, would be enough for CEOs to gain a measure of confidence.

Why would China go along, you ask? Because we think China is petrified about getting a Democrat President from the current motley group of Democrat candidates. They now understand President Trump after having invested 2 years in trying to get a measure of him. And they know he can deliver. In contrast, they have be scared out of their minds about Warren or any of the other group of candidates. They also know that the Democrat party is now even more anti-China than President Trump.

The above is why we think the collapse of CEO confidence is a more transient phenomenon while the strength in consumer confidence is likely to be more durable, especially now that the Fed is committed to letting rates stay here or go lower. Also around March-April we expect the Trump Administration to announce a reduction in the payroll tax deduction from paychecks. This would put more money in the pockets of  middle class & lower middle class workers.

The biggest potential impediment to our thesis was a big & obstinate mistake by the Fed. That risk is now minuscule, we believe. The Powell Fed has zero or lower interest in getting blamed for “deliberately” weakening the US economy in as emotionally turbulent an election year as 2020 is likely to be.

2.Speaking of the Fed

Frankly, we did not like Chairman Powell describing his monetary policy as being in an appropriate place. That self-satisfied self-congratulation bothered us. Mainly because whenever Chairman Powell has been publicly & complacently confident, he has had to eat it.

Unfortunately, he may have to do so again & not in too distant a future: 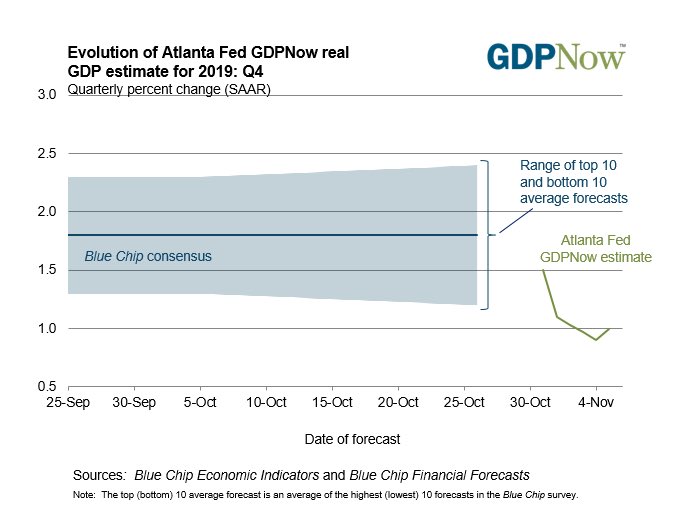 Yeah but Atlanta Fed GDPNow is fickle, right? Who else would say something like that? 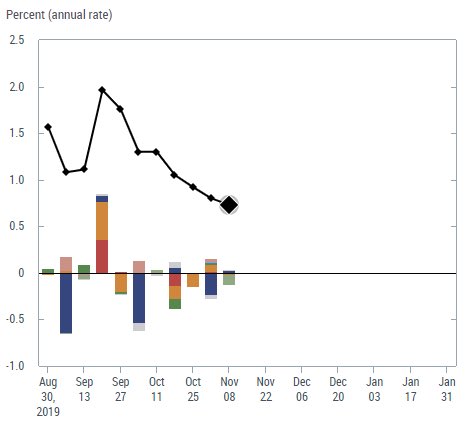 What if this weakness in GDP spreads to other data & presents Chairman Powell with another decision by December 19, the next FOMC day? And how would the stock market react if he remains obstinate at the December 19 meeting?

On the other hand & especially if the stock market remains strong, would Senator Warren/Sanders claim that the Fed is again helping preserve the wealth of ultra-millionaires & billionaires by doing QE instead of helping the American people by lowering rates? Ms. Warren has never been a fan of the Fed. How long will she wait to accuse Chairman Powell of kowtowing to President Trump & trying to preserve the economy of & for the 1%? By then, she herself would be under heavy attack by VP Biden, Hillary Clinton & even perhaps by Mayor Bloomberg. So what would she have to lose by going at the Fed? Those who don’t remember her animus should go back & look at how she treated Chairman Bernanke during his Congressional testimony.

That is why we don’t understand why Chairman Powell was so self-congratulatory in his nouveau Mission Accomplished statement. We sincerely hope that self-satisfied complacency was not because of the huge rally in risk assets in the past 4-6 weeks.

The chart shows that the rate of change can accelerate more. But the chart also shows how quickly & how much it reverses. 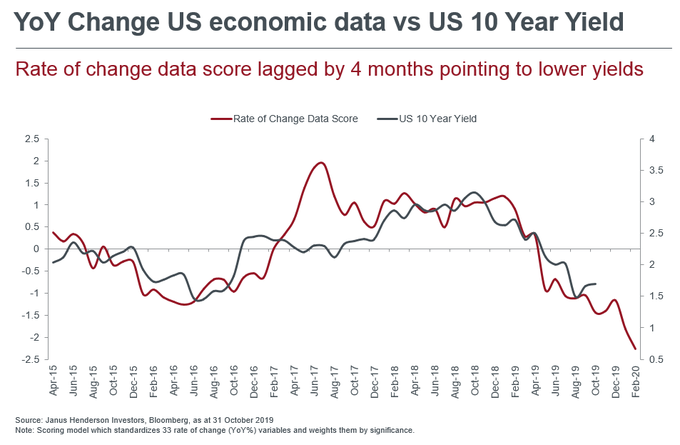 All this is fine, but is there a technician who would stand up & say fade this explosion in 10-year Treasury yield? Carter Worth, the resident technician at CNBC Options Action, did precisely that & said the 10-year yield could fall to 1.7%.

He was not alone. Hedgeye also put out a Macro Buy signal on TLT on Friday afternoon.

What media signal did we see that got us thinking along similar lines? Our old conviction about CNBC Anchors & their mission against US Treasuries. The link will take you to our detailed article with a similar title dated August 23, 2008, just 3-4 weeks before the waterfall decline in Treasury yields in the fall of 2008.

This week we heard CNBC Anchors express their glee about the rise in Treasury yields. And yes like in  2008, their joy at yields exploding higher was even greater than their joy about stocks rallying higher. We didn’t get this CNBC-Anchor  animosity towards Treasuries in 2008 and we don’t get it now. But we do hope to benefit from it as so many did in 2008.

There is one change though. This time only women anchors, mainly newer women anchors, at CNBC expressed their anti-Treasury joy & not male anchors. Is this another sign of increasing gender equality, unfortunately in the negative direction, at CNBC or is it simply a part of new anchor orientation at CNBC?

Yes we do understand that we are in another QE cycle and Demarkian signals against risk trades don’t work well under QE conditions. But we can’t resist featuring a Demarkian view that matches the above technical, fundamental & media-based views: 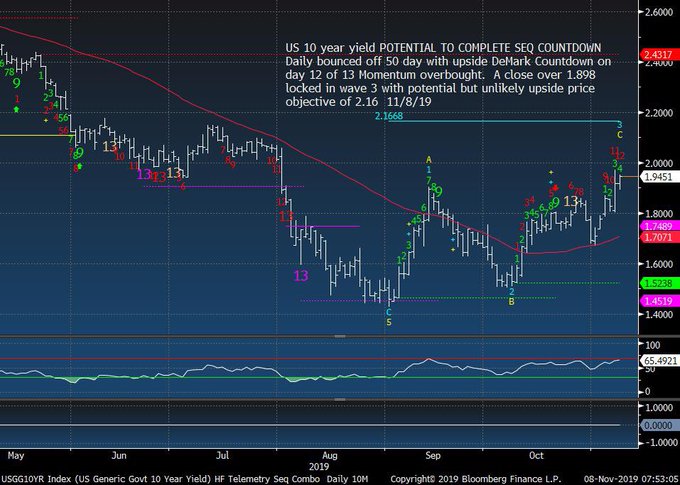 That brings us to stocks. But before we go there, we should remember Newton & the difficulty about predicting when exactly strong momentum reverses.

Remember what Fed’s QE does to volatility? It kills it. Lo & behold, $VIX closed just a few pennies above 12 on Friday.  Some say this decline is forced & not natural leading to the obvious question: 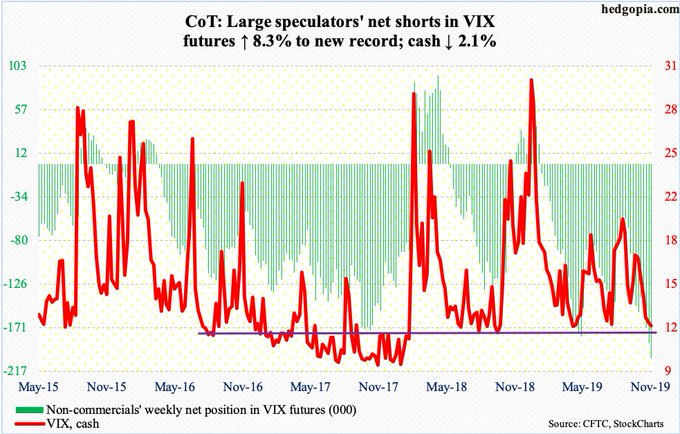 What is the Options Market suggesting? 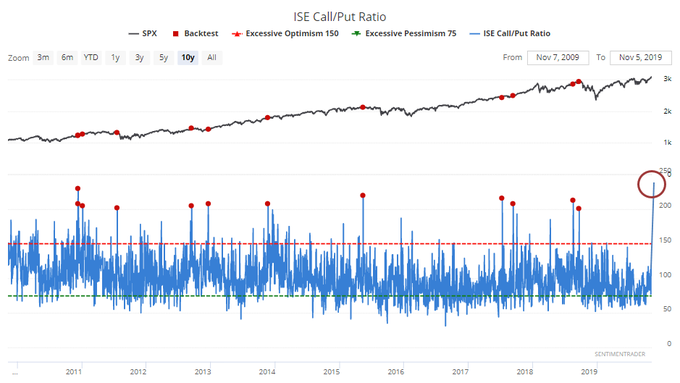 It is important to add that we have featured tweets from @sentimentrader that show, at least statistically, the S&P has farther to go on the upside in 6-12 months. So the above tweets are very short term in nature.

That is also the case with Tony Dwyer of Cannacord who expects a 2-5% correction soon but wants it to be used to add to stock positions to benefit from a move to 3250 on the S&P 500 in 2020. Listen to him yourselves:

On the other hand, Lawrence McMillan of Option Strategist wrote in his Friday summary:

Think back to October 21, 2019. At that time the SPX was just above 3,000 and short contracts on the VIX were about 155,000. At that time, a technician said the market could get to 3060-3090 & then correct. Well, the first part of the prediction has come true. What was the second part of the prediction? That the S&P would drop to 2540-2560. That technician was Carley Garner, a colleague of Jim Cramer. Listen to Cramer explaining Ms. Garner’s prediction but hope the second part of Ms. Garner’s prediction is proven wrong.

Gold & Silver were literally shot this week and thrown to the wayside by two big firms. Gold was down 4.7% on the week & Silver was down 7.3%. Gold miners were down 6-7% as well.

But one view says this is a short term pull back within a bullish intermediate term trend: 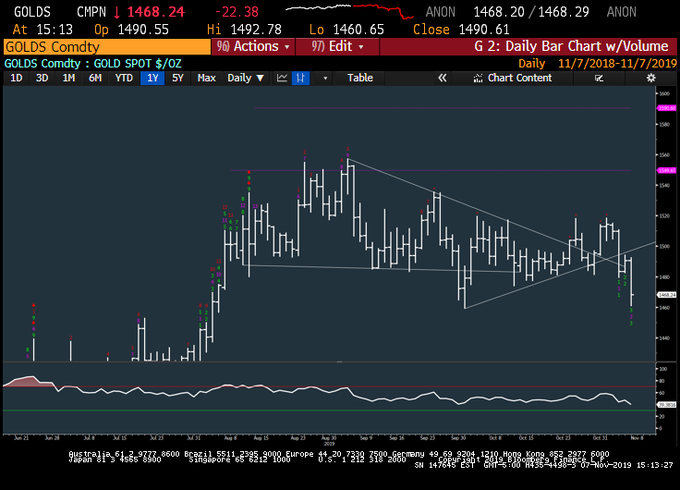