Needless to say we don’t mean what used to be normal. No, we mean what has been normal since 3rd week of March, 2020.

After a hiatus, the Fed’s balanced sheet grew again this week to go past the $7 trillion mark. And long-duration Treasury yields began correcting their previous week’s rapid rise by falling on 4 of 5 days this week. So what happened is what has been happening since late March 2020 – QQQ blew away the S&P & Dow while Russell 2000 actually fell. Cloud stocks once again claimed leadership with Amazon up 4.2%.

Once again, the fundamentals of their growth outshone the potential of the earnings turnaround at “value” stocks: 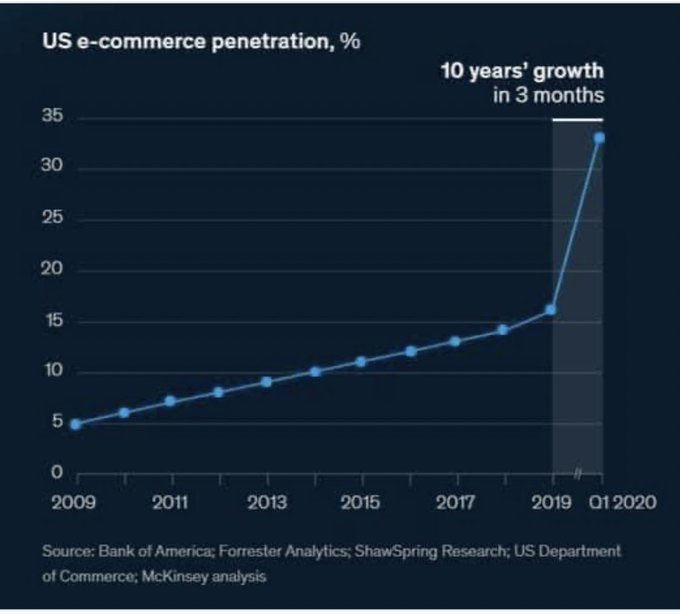 Contrast this with the utter indifference among Democrats to getting much needed financial stimulus to the lower-income or unemployed Americans. Their spending power is being reduced on a weekly basis. So why one earth would people crowd into stocks that depend on this non-cloud, non-internet spending? No wonder long duration rates have found a new vigor in going down especially given what the Fed minutes said.

This continued on Friday and actually got stronger in one sense:

It got so bad that CNBC’s Scott Wapner actually got angry on his show & began berating his “investment committee” about the death of the “rotation to value/cyclicals” they had been pushing for a couple of weeks. Wapner should have gone back & watched old clips of David Tepper say again & again “don’t overthink it“.

All these “investment advisors” talk about the stock market not being the economy. They don’t get that the Fed remains the ONLY force behind this stock market. And what does the Fed control or at least seek to control? Money Supply & NOT the GDP.  Since a picture is worth lots of words, they should see the following chart from Nordea (via Market Ear): 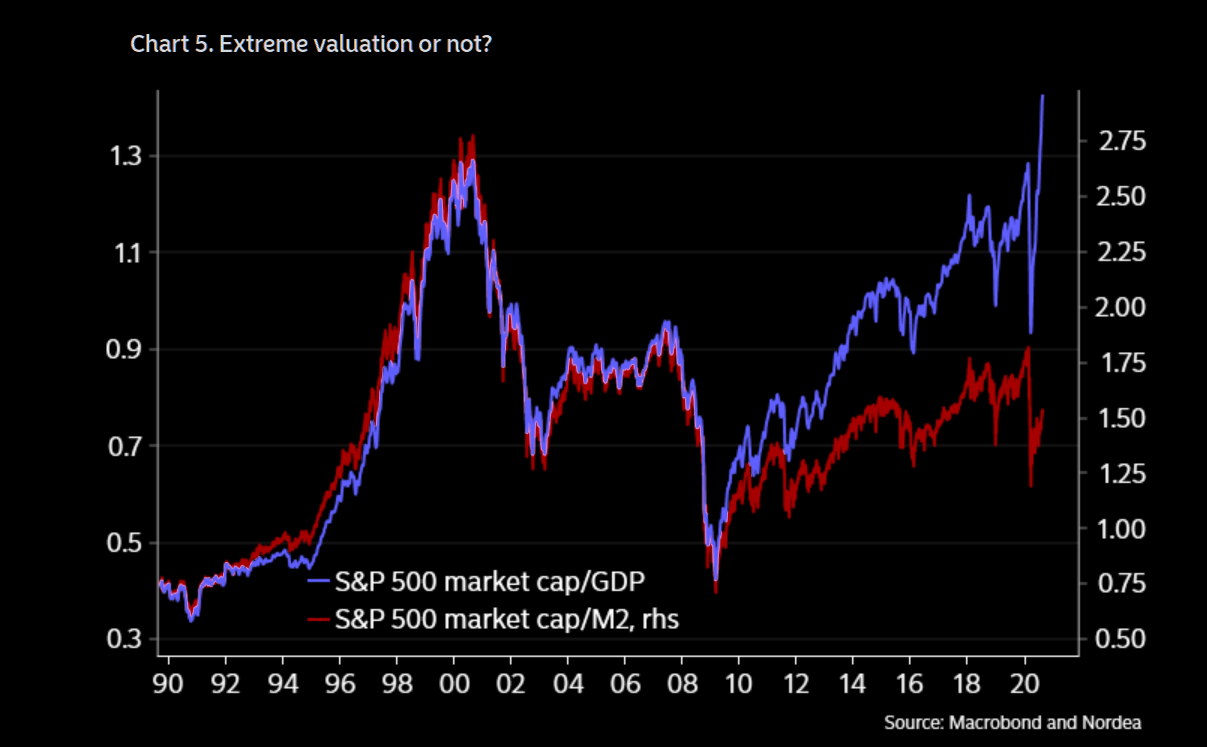 Now re-read David Rosenberg’s tweet above and ask what can the Fed do except increase its balance sheet. If they do, the same cloud-type stocks in the NDX will go up & the rest will meander. If they do nothing, then they will reduce liquidity or simply maintain and the “rest” of the stocks will get killed while the cloud-type stocks merely fall. This is why Chairman Powell was begging for fiscal stimulus at the last FOMC meeting.

But Pelosi & company don’t care & perhaps rightly so. If they surrender & get cash into the hands of the vast majority, then the benefit might actually accrue to President Trump. So they may have made a calculated decision to inflict economic pain on the income-poor, small business groups hoping they will blame President Trump.

Now Chairman Powell is on deck at Jackson Hole next Thursday.

2. Calling for a big change

The U.S. dollar rallied by 80 bps after the Fed minutes were released this past Wednesday. Tom McClellan doesn’t think the Feds like that & so he thinks they are going to get upset soon & it will give them “additional justification for keeping short term interest rates lower“. We have news for Mr. McClellan – they don’t need any justification whatsoever. 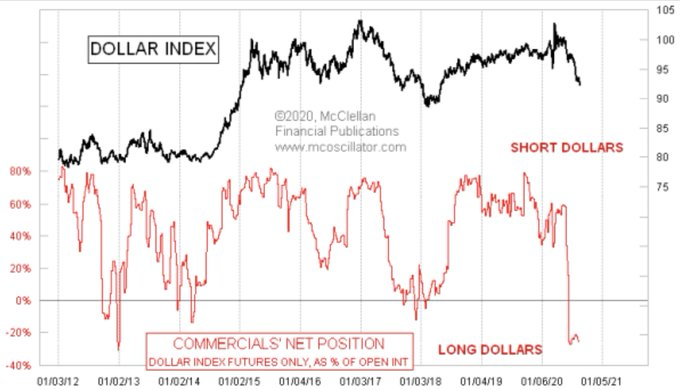 This week Larry Williams, a legendary trader, told Jim Cramer that the Dollar is headed higher. 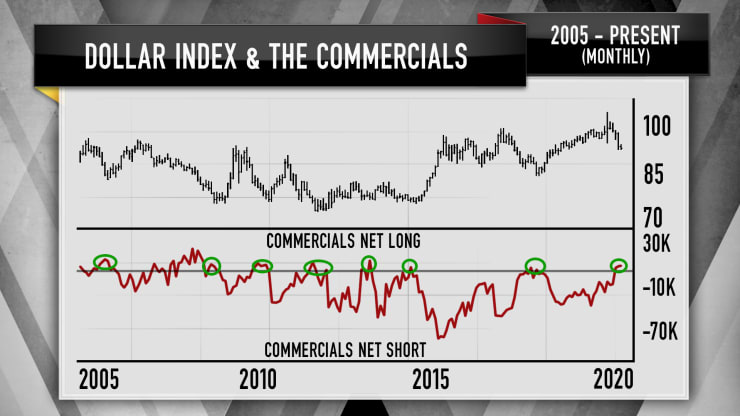 “Whenever these commercial hedgers build a big net long position, above the black horizontal line, Williams points out that the dollar index actually tends to rally pretty consistently, … We’ve just gotten to a point where the commercial hedgers are net long, [which is] an unusually bullish position that says buy the greenback.”

A rise in the Dollar is usually indicative of decreased liquidity. So would the calls above, if realized, create a downward pressure on Treasury yields? And that too after a fall in yields this week that reversed about 45% of the big rise in yields the week before? 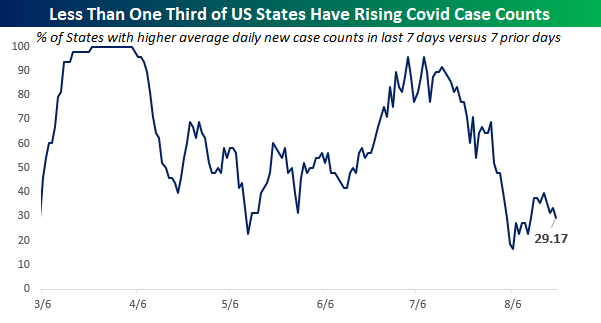 So why did rates fall this week? Are they smelling what is coming next? Jobless Claims rose this week after falling for several consecutive weeks. Is that a sign that the next Non Farm Payroll report will disappoint?  Or was the steep 21 bps rise from August 7 to August 14 just a correction of a big overbought condition in Treasury bonds?

But before the next NFP comes Jackson Hole next Thursday. What Chairman Powell says or doesn’t say might have some impact, won’t it?

We all know that Nasdaq is on fire but we also recollect that charts that glorify cross-asset moves like the one below are sometimes subject to a tactical reversal.

So many tell us that now is just like Feb 2020 and their points seem to make sense. But one guru points out a difference in the volatility charts then & now.

Lawrence McMillan on volatility in his Friday summary: 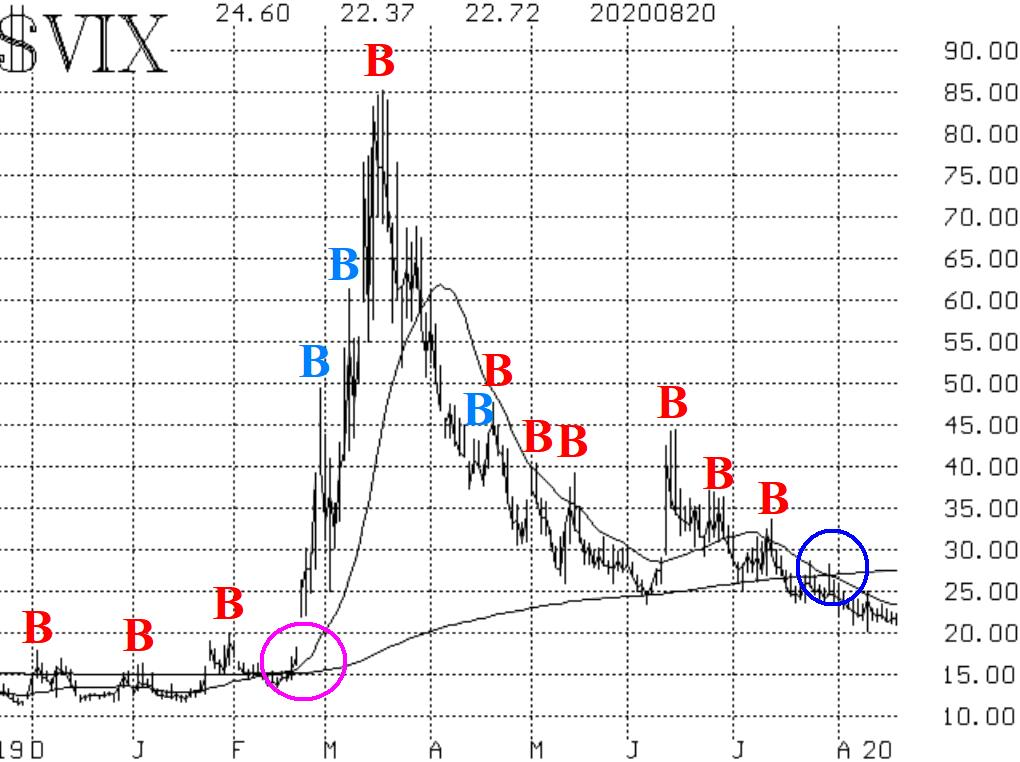 The S&P made a new all-time closing high on Tuesday at 3389.78. The next day came the sharp fall after the release of the Fed minutes. That raises the specter of a double top.  That makes the following tweet relevant:

Then Friday’s rally & close at 3397 put the S&P above both previous closing high and the intra-day high. Does that negate the double-top possibility? We don’t know but we would feel a lot better if the S&P rallies to a decisive new high.
Despite the rally on Friday,

And as you must have guessed, 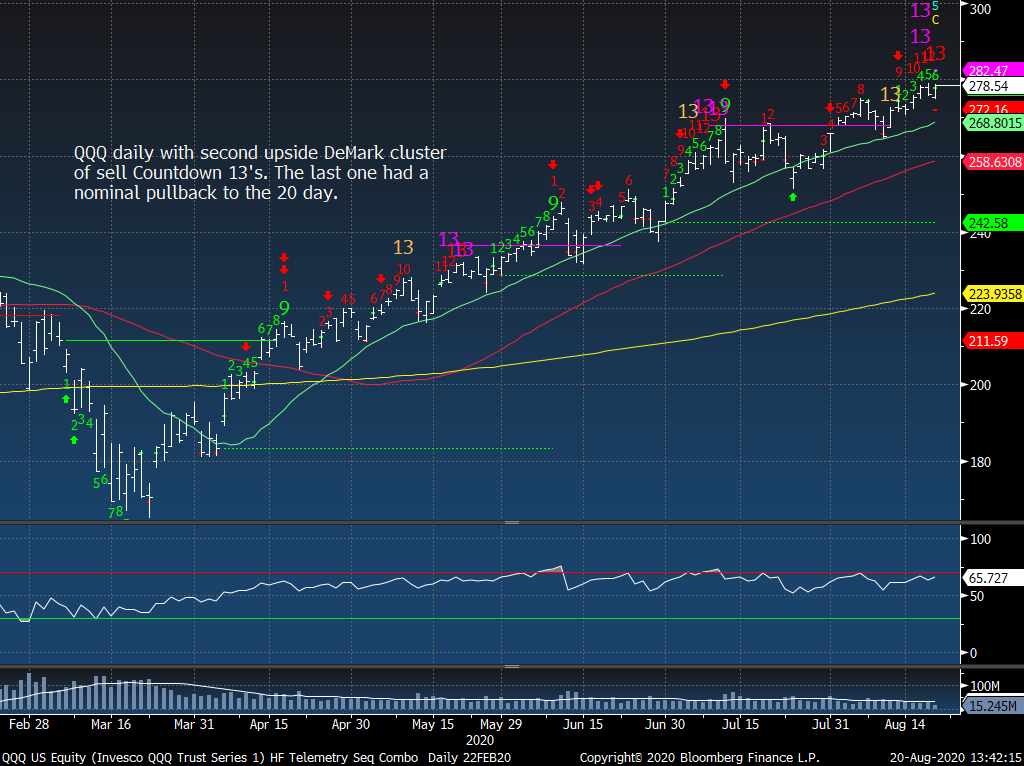 5. China getting restless or the entire world?

This week Jim Cramer alluded twice to the “Xi is in trouble” sentiment.  In this context, read how Phillip Orchard of Geopolitical Futures opened in his article on Friday titled “China’s War on Taiwan Won’t Start in Taiwan“:

What might be Washington’s main issue? Whether Trump or Biden wins the election. Whether Mike Pompeo or Susan Rice will lead the effort to manage China.

This may be the most momentous election of recent decades in America. The World gets it & the World will pivot as needed. For a more detailed discussion about the restless world, see our adjacent article A Restless World – – Middle East, China & Kublai Khan & Far East.

Another sign of a restless world & their deep apprehension about Biden is the report below about the Biden & the Democratic Convention by India’s Palki Sharma & WION .