Sometimes an avalanche of bad news arising from an impetuous blunder is a good thing. Panic at collapsing support is sometimes a trigger to break out in a new positive direction. We don’t know if that is behind this week’s elementally sensible decision to formally launch Aukus, the new trilateral partnership between USA, UK & Australia. Whatever the trigger, the result has real promise.

Watch President Biden’s announcement in the first 5:20 minutes of the clip below:

We use the term “elementally” with deliberation for its core meaning – “in a way that is very basic, simple, and powerful“. Below we demonstrate why this Aukus partnership is simple, very basic & exceedingly powerful.

The biggest factor of the first 1/5th of this century has been the stunning rise of China, both economically & militarily. While most view China as an unstoppable power on its way to hegemony, China has existential  risks in both economic & military spheres.

Look at any map of China and notice that China does not have large rich trading partners that it can reach by land. China tried to build that capability via its One Belt One Road initiative but that has been “all hat & no cattle” to use a Texas description. So access to sea routes is an existential necessity for China.

So, as Dr. Friedman points out:

You can’t get more basic than that. So what are these choke points you ask? Just look at the map below from the Geopolitical Futures article: 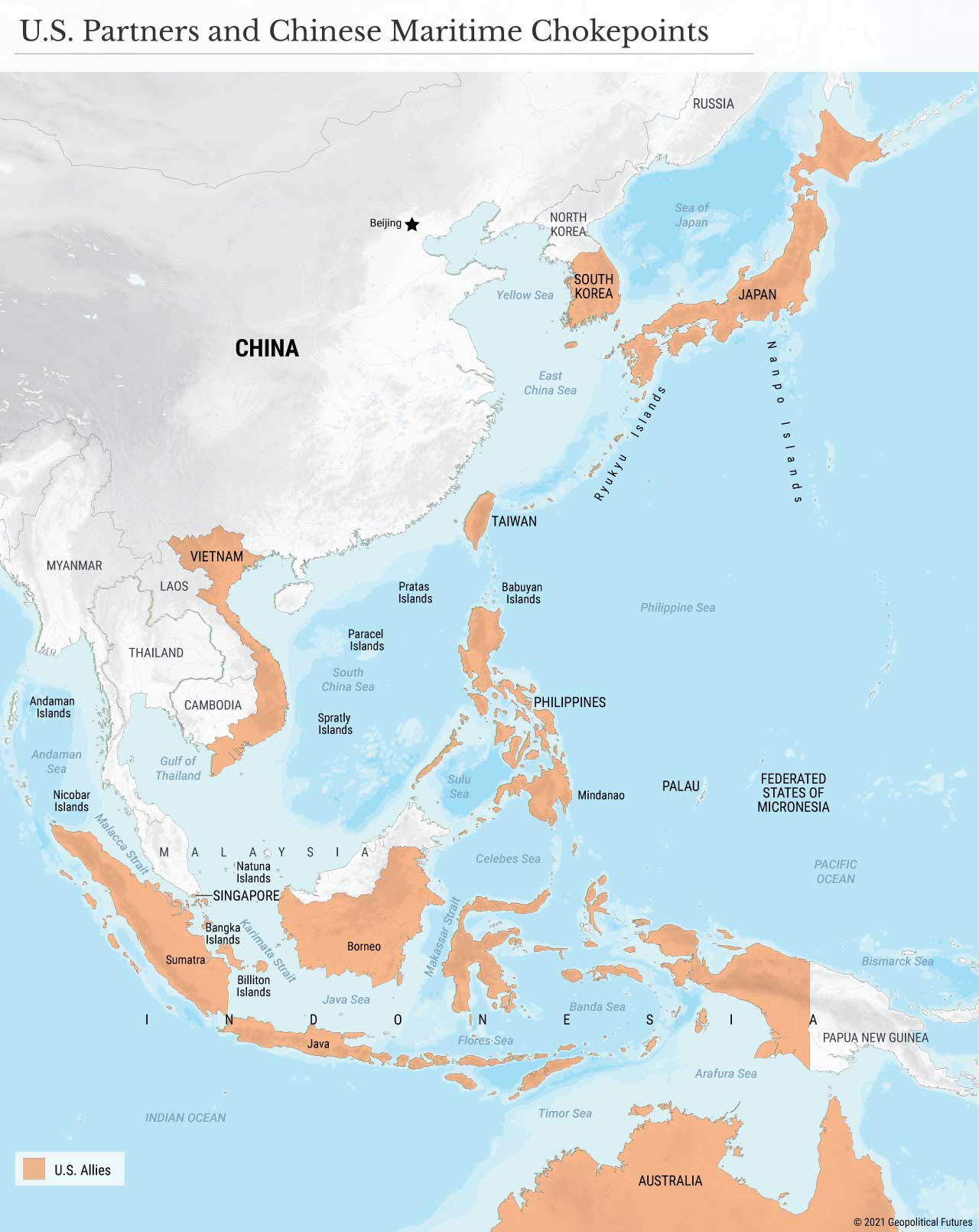 Focus now on the Philippines, Malaysia & Indonesia. These small & weak maritime neighbors are the key to China breaking the choke holds. So a sensible strategy for China would have been to emulate America and make these small neighbors economic partners by sharing China’s exports.

But China has been as anti-sensible as you can get. Like the old “tremblingly obey” dictates of the Chinese emperors, China has tried to dominate these neighbors by staking claims on the island chains that lie between Chinese coastline & these neighbors.

But China could forget about these island chains if it could get Taiwan, the big prize in the South China Sea. China has built a decent capacity to fight the US Navy in its own backyard. Now China has begun a campaign of military intimidation of Taiwan by routinely sending its fighters into Taiwanese airspace and warning Taiwan that Taiwanese defenses could be overrun very quickly. They have also warned that America could desert Taiwan just as quickly & surprisingly as America deserted Afghanistan.

Doesn’t this remind you of the tactics of Imperial Japan in the 1930s? They were as concerned about a US naval choke hold as Chinese are now. And that Japan finally struck out by first knocking the US Navy out of Pearl Harbor & then conquering both Philippines, Malaysia and the huge British base at Singapore. 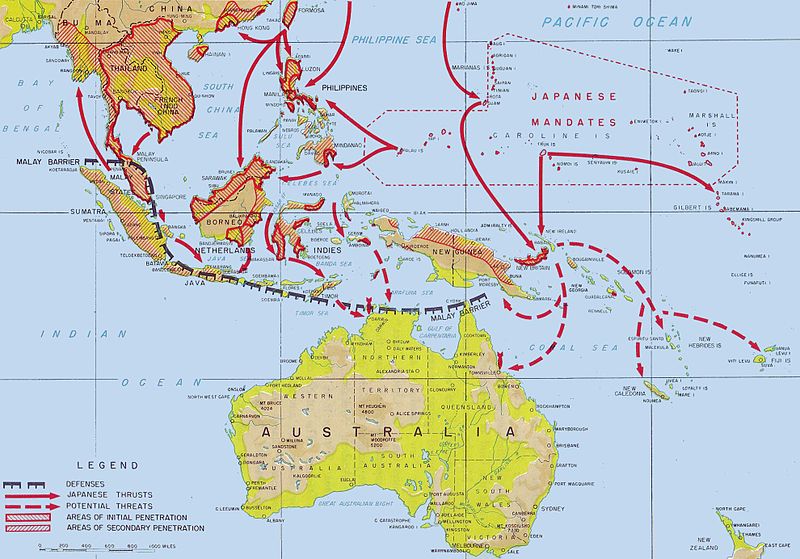 Where was that Japanese Naval advance stopped? In the naval battle (May 4-8, 1942) for the Coral Sea & Port Moresby of New Guinea just north of Australia. That proved to be the first strategic victory for US-UK in that naval war. A month later came the destruction of the offensive capability of the Japanese Navy in the Battle of Midway (June 4-7, 1942).

Now look again at today’s China choke points map above from Geopolitical Futures. Assume all the small islands between China & Philippines/Malaysia are seized by China and China has attacked Taiwan. From where will the US Navy & Air Force counterattack?

So simple that even simple minds like us suggested a “merger” between America & Australia back on September 3, 2011. That was triggered by China’s declaration of its own “Monroe Doctrine” that included Australia in the then declared Chinese zone of hegemony.

More on our “merger” idea later but suffice it for now to quote the naval angle from our September 3, 2011 article (which did reach Australian press corps & US State Dept, as we believe):

Two months later President Obama visited Australia in November 2011 and said “The United States Has No Stronger Ally than Australia“. And, if memory serves us, the US Navy did begin a small presence in Darwin, the capital city of Australia’s Northern Territory.

Fast forward to now and see why Australia is even more important today for naval trades originating in China: 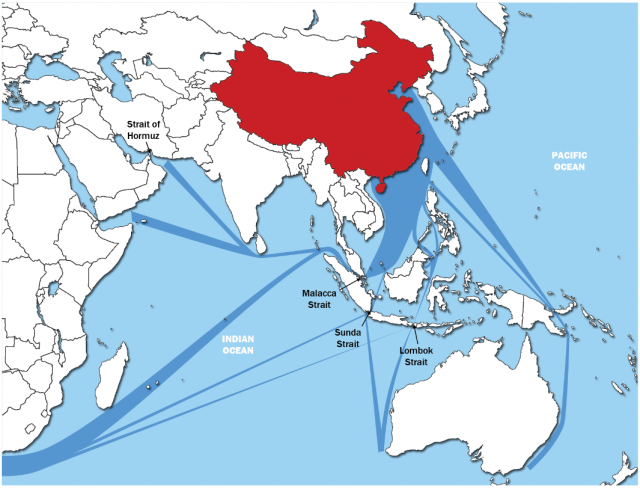 Of course, the easiest & most used naval route is via the Malacca Strait that begins in Singapore and ends just below the Indian Naval base at Andaman-Nicobar islands in the Indian Ocean. Remember the centuries old Portuguese saying was “whoever controls the Malacca strait controls Venice“?

The Indian Navy is strengthening its naval strength in the Indian Ocean to affect Chinese naval trade through the Malacca Strait via long range bombers, submarines & land-based anti-naval missiles. The US Navy is supporting such capabilities with regular naval exercises with the Indian Navy. For its part, China has virtually declared war on India on land in the northwestern region of Ladakh bordering Afghanistan & NaPakistan. And India has warned that it will extend any land war initiated by China to a naval war in the Indian Ocean.

What are the alternate naval routes open to China? Via Indonesian straits named Sunda & Lombok. Look again at the above map to see how close these straits are to Australia & the northern port of Darwin.

While the announced deal is for building a few conventionally armed nuclear submarines by Australia, the real aim is bigger. Read what Australian Defense Minister Peter Dutton said:

And read what U.S. Secretary of State Blinken said at the same press conference:

What if U.S. places long-range bombers at Darwin? Is there a direct route to Chinese coastline? 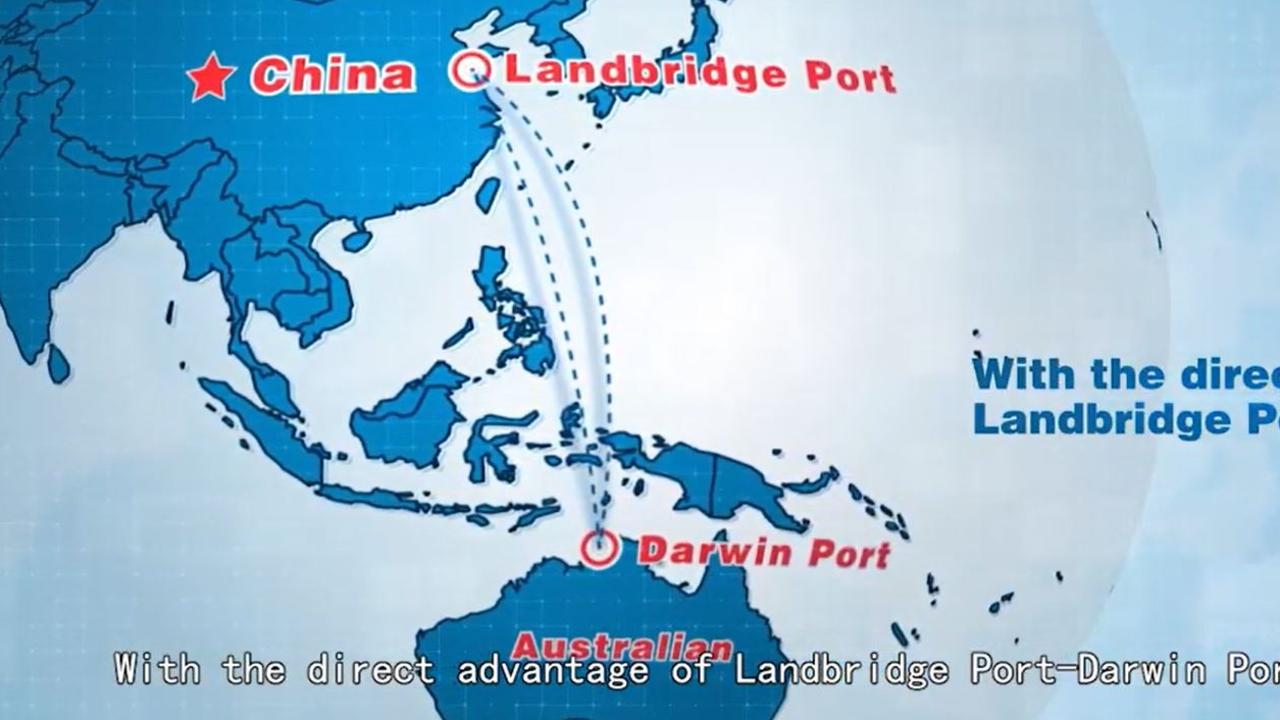 Now ask yourselves, will China launch an all-out attack on Taiwan without taking into account long range bombers & missiles the U.S. places in Darwin or deeper in Australia?

If you are disposed to answer No, then you yourselves have demonstrated why Aukus is “very basic, simple & powerful“!

Simply put, Australia is to America today what Britain was to America in WWII, as we wrote in our November 19, 2011 article titled “The United States Has No Stronger Ally than Australia“:

There is a strategic reason for Britain to join Aukus and take on the responsibility that entails. To paraphrase Vishnu-Gupt Chanakya, the author of the legendary book on StateCraft,  अर्थ मूलम् हि राष्ट्र धर्म कार्यम् (economics is alone at root of statecraft). How does that apply to Britain’s entry into Aukus?

Read what Geopolitical Futures wrote the day before the Aukus announcement this week in their article sub-titled London is once again embarking on a redefinition of its global role:

Have you forgotten that British foreign trade used to go along with British Naval power? You may have but Prime Minister Boris Johnson has not:

Remember that Britain is a part of NATO and the closest military ally of the United States. So if the British Navy is attacked by the Chinese Navy in “international waters”, then the US Navy might be forced to intervene. To put it bluntly, the presence of the British Navy in the South China Sea could be the tip of the American spear. Look at the YouTube clip published by the Military of USA:

Read the last two sentences of our November 2011 article titled “The United States Has No Stronger Ally than Australia“:

Yeah, right! The reality is President Obama forgot about ally Australia & about adversary China after he got home from Australia. That is our fear about this big Aukus announcement.

On the other hand, the UK is now involved and Australia will get the nuclear-powered submarines. So, at the very least, Aukus will be additive to the partnership to make China less combative and un-hegemonic.