Editor’s Note: This is not an investment article but an article of celebration and an article about differences between science and technology. It is NOT intended to provide any investment advice of any type whatsoever. No one should base any investing decisions or conclusions based on anything written in or inferred from this article. Investing is a serious matter and all investment decisions should only be taken after a detailed discussion with your investment advisor and should be subject to your objectives, suitability requirements and risk tolerances.

As if right on cue for Deepavali, the Indian Stock Market rallied to an all-time high this Friday. In fact, three successive highs were recorded by the Sensex this week to close at 21,196. This is a joyous occasion for all traders in India and all holders of Indian stocks around the world.

What a rally it has been from the horrible days in summer? The Sensex closed at 17,996 on August 27, 2013, the day before it bounced from the summer doldrums. The 18% rally from August 28 to the Diwali close is to be celebrated during this Diwali.

We understand that the economy in India is still plagued by high inflation and slow growth. The middle class and the poor are both hurting at this time. Sales in many stores in Mumbai are down double digits with some stores reporting 50% decrease over last year. These are troubled times indeed.

Look at the other BRICs. The Chinese economy has to undergo a long, hard, and painful restructuring from a fixed asset investment economy to a consumer spending economy. The imbalances in the Chinese economy have reached a level that has never been seen before in economic history. The world hopes Chinese leaders will succeed in this mammoth restructuring but no one knows for sure. Brazil is facing a secular challenge from the end of the commodities supercycle. And Russia is almost totally dependent on high oil prices to keep their economy growing. Most of other emerging markets have grown off of Chinese demand and may have to restructure their own economies.

India stands virtually alone among emerging markets as a potential beneficiary of global trends. Because Indian economy has the sound basis of domestic growth, secular demand and an entrepreneurial class. This is why we have always been and remain bullish on the micro story in India. And a drop in oil prices is nothing but great news for India.

Obviously the macro story in India is pathetic, mainly due to an utterly incompetent government and a political class that seems focused on getting personally wealthy by plundering the Indian economy via corruption. The Indian people, especially the middle class, know this very well. That is why everyone we know is praying for a change in government in the 2014 election.

Technology vs Science – Finance vs. Economics

As Robert Shiller of Yale, this year’s Nobel Prize winner, wrote in his book:

This basic understanding seems completely lacking in today’s India. That is why Indian economists seem mesmerized by science of economics rather than technology of financial markets. They seem obsessed by “why” rather than “how” without understanding that “how” leads to success while “why” can be very expensive. Let us give you a simple example.

Arvind Subramanian is a well known economist at Peterson Institute for International Economics. Recently he wrote an article in the Business Standard titled What saved the rupee? It is a good article in which Subramanian discusses four factors. His fourth factor is what, he argues, saved the rupee.

And the “how” process deals with non-academic but extremely important questions like “is this the day to buy?’, “will rupee or stocks continue to fall after I buy?”, “am I catching a falling knife”, or basically “how do I know today is the time to buy?” These “how” questions are extremely important and actually far exceed the importance of “why” questions at least to the professional investors.

Financial technology studies the above “how” questions and develops statistical technologies to understand “how” and “when” trends exhaust themselves. Remember, the frightening fall in the Indian rupee in the summer? Remember how you woke up every day to find that rupee had fallen again in Singapore & London? That fall was a classic intense fast trend. And like all forces of nature, financial trends exhaust themselves. That is the rationale behind statistical techniques of trend exhaustion.

And what do professional investors do when they see such a signal? They put on trades to take advantage. We discussed this on August 31, 2013 in our article Indian Rupee, an Existential Battle & Echo of Soros vs. BoE?

Others must have stepped in to buy as well on that day. But “how” is this reason the Rupee turned? 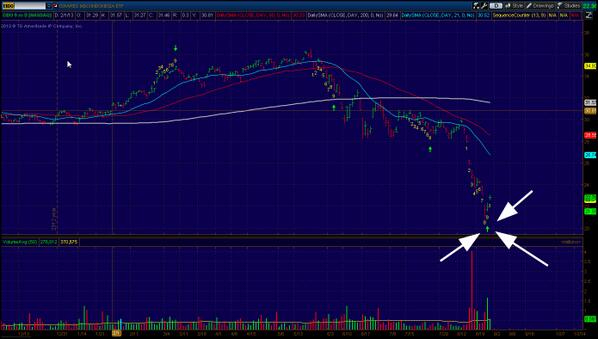 An Indian exchange traded fund (ETF) is a portfolio of Indian stocks that is traded as a unit. So when you buy an ETF, it electronically results in buying of proportional amount of Indian stocks. And that is done by transferring money into Indian rupees in India, because Indian stocks trade on Indian markets. If you are buying from another country, you may want to search for ‘business money transfer international‘ to find a safe and secure way of sending this money.

This is a classic case of “how” markets turn and “how” technology of markets, of statistical finance is employed in finding solutions. This is the difference between the technology of financial markets and the science of economics. This is something you will not find in the “why” articles of economists like Arvind Subramanian.

This is why Raghuram Rajan is trying to build deep capital markets in India. India needs such markets and their sophisticated technology to deliver steady credit to Indian economy and to protect it from rapid convulsions in capital flows.

So if you have made money in the rally in the Sensex, thank Devi Lakshmi and support Rajan’s drive to build financial markets in India. Then the blessings of Lakshmi will be bestowed on all Indians and not just on the Sensex investors.