Editor’s Note:  In this series of articles, we include important or interesting videoclips with our comments. This is an article that expresses our personal opinions about comments made on Television and in Print. It is NOT intended to provide any investment advice of any type whatsoever.  No one should base any investing decisions or conclusions based on anything written in or inferred from this article. Macro Viewpoints & its affiliates expressly disclaim all liability in respect to actions taken based on any or all of the information in this article. Investing is a serious matter and all investment decisions should only be taken after a detailed discussion with your investment advisor and should be subject to your objectives, suitability requirements and risk tolerance.

So said Rick Santelli on Thursday morning. He is absolutely correct. And bad things happen to markets when the yield curve flattens.

Virtually the entire world expected the yield curve to steepen this year, to steepen with 30-year yield rising faster than 5-year yield. Just the opposite has happened. And this week it looked as if the entire yield curve will “scale down” in the words of Rick Santelli.

Even if the economy slows down and yield curve scales down, the yield curve may continue to flatten thanks to Chair Yellen’s comments. After all, she told the markets that her Taper will continue and rates may rise in 6 months after taper completes. So the short yields will have a natural tendency to rise and long rates seem disinclined to go up.

This is awful for the stock market which went up all last year on steepening yield curve and its message that the economy is growing. Is the flattening sending us another message this year? We knows short yields shot up courtesy of Chair Yellen but what about the long end?

Is McDonald right?  We may know better next Friday after the payroll number.

The past week & half has featured vicious rotation, rotation that causes severe damage to large positions that can’t be closed quickly. Rick Santelli said on Friday:

Just look at EM equities and EWZ in particular. The Brazilian ETF is up 10% since the Fed meeting while tech darlings have been sold hard. Not just recent IPOs, FaceBook, NetFlix, but even Google the stock with the best fundamentals in the world as Stan Druckenmiller told us last year. This week “it may be the single worst acting stock in the entire stock market” in the words of Jim Cramer on Thursday.

It seems that investors are taking down positions because of fear, uncertainty or as Cramer said on Thursday:

This is the stuff a flattening yield curve creates. Thank you Dr. Yellen.

Cramer also said what has puzzled us:

Despite the damage done to momentum stocks and the vicious rotation, the S&P remains close to its all time high. So where do we go from here? Jeffrey Saut of Raymond James sort of answered in email alert on Friday:

Lawrence McMillan essentially said the same in his weekly outlook:

Michael Pento was a bearish as they come on CNBC Closing Bell on Friday. No wonder they deleted his comments from the videoclip of his segment on CNBC.com. Pento said, as we recall:

Below are some bearish & bullish tweets we found interesting: 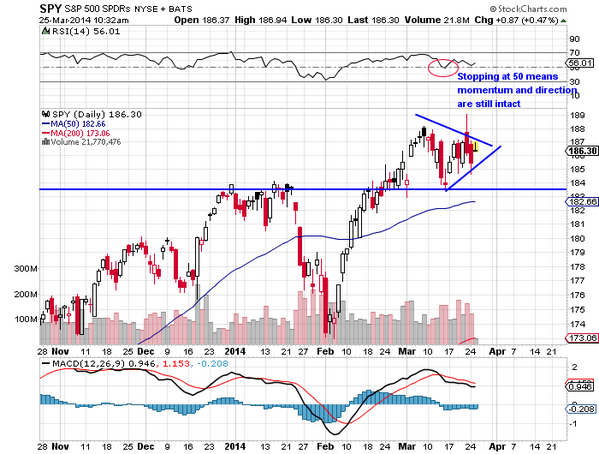 Guy Adami of CNBC Fast Money usually says that gold rallies like an escalator but falls like an elevator, or something very similar. That seems as good a description as any for Gold’s action post-Yellen.

The tweet below gave a measure of this elevator fall:

The comments below are from an Gold death cross & post-FOMC sell-off on CityIndex:

Then you have the following tweet about the two crosses:

And finally a tweet from one who said “buy buy” in December 2013 and tweeted “lighten up” on Friday, March 14: