This week the hate campaign in the US-British media against Mr. Modi reached feverish proportions. We were struck by the consistency of hate across the media spectrum from the NYT-WashPost echelon to the lower more rabid level of Vox & Foreign Policy magazine. This heightened rage is probably due to this past week’s polling in India. The “Modi wave” seems to be rising higher instead of peaking based on Thursday’s tweets below:

The second tweet, from someone who has been viscerally anti-Modi, is revealing. He seems upset that his  “friends” are now making a u-turn towards Mr. Modi, a sign of capitulation. Rahul Kanwal is an anchor on Indian TV and his tweet, like those of his TV colleagues, shows that they are making a turn to towards Mr. Modi as well.

But not the “western” media. We wondered why. In this article, we lay out our thoughts and conjectures.

For the past 10 years, India has been ruled, actually owned, by a “white” European Christian. How reassuring must that have been to the “western” media & establishment! This was not the starving, beggar India of old; it was the an India that could be legitimately valued as a potential counterweight to China, an India on track to become one of the top three  economies in the world in the decades ahead.

China can never be controlled; it is too independent, strong, and determined to be an empire. India is the only country that was both controllable and a match for China in size, population, geographical position.  How reassuring must it have been to have this huge potentially mighty country under complete control of one of their own kind – a White European Christian. An India under White European Christian control would never stray too far from what the path “western” countries want India to follow.

Go back and look at the major US & British newspapers for the past 10 years. You cannot find many  negative articles about Sonia, the White European Christian ruler of India. Imagine a foreign
immigrant from a tiny religious minority (2.5%) of India ruling with
quasi-colonial power over the Hindu majority (80%). Yet no one in the vast Western media spectrum found anything wrong in it. Rather than writing about how unsustainable this quasi-colonial set up was, they wrote effusively about Sonia and enthusiastically supported her mediocre unaccomplished unqualified son.

The ultimate in effusive praise came from, of course, the New York Times in the first article of NYT-India Ink. It was titled Welcome Madamji, with the sycophantic double honorific Madam-Ji, and showed the following photo. 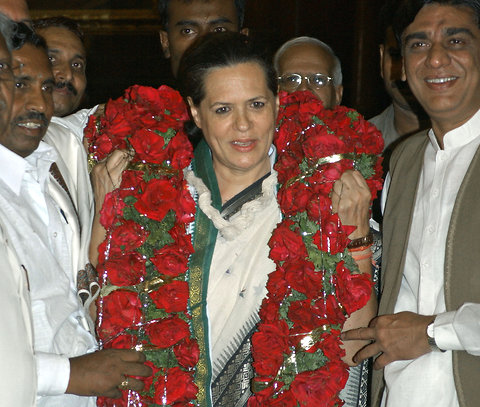 Imagine the angst, the anger that grips NYT, Washington Post, the entire “western” media cohort and the “western” establishment when they see the end of this reassuring comfortable control of one of their own, a White European Christian, on this land called India, a land that they thought they were molding to become the way they want it to be. Not only has their control & their comfort evaporated, but, horror of horrors, it has been replaced by agonizing worry, deep anguish, and unsettling fear.

Because India is about to be run for the first time by a true Indian, a core Indian who has absolutely nothing in common with the White European Christian “west”, a confident Indian who wants to lead India to a truly independent powerful position in the world as a reinvigorated Bharat and not as a “western” vassal.

This possibility was unthinkable two years ago and it was nervously dismissed just 6 months ago. Now it stares them in the face. No wonder they are so panicky and snarling.

But there is something more. It is the loss of a dream, a cherished dream that they had. The dream that Tom Friedman, Anne Applebaum and other “liberal” western analysts had written about.

2. Waking up from their Dream?

The American “liberal” cohort is as close to Britain as you can get in America. They have inherited the so-called “white man’s burden” from the colonial British. They actually believe, fervently believe, that British rule was good for India. Like British “scholars” of yore, Macaulay-Mills-Kipling, they believe that Indians need to be rescued from that horrible yoke of “Hindu” stuff and brought into White European Christian thought if not religion.

They didn’t stop at believing. They put large resources to work to this end via their NGOs, Universities, think-tanks and publishers. They have given literary awards to writers who write the way they want and arranged financing for academic centers & professors who write & teach to educate Indians away from “Hindu” stuff. Their conviction was the same as that of the colonial British – that as Indians get more educated & prosperous, they will become more White European Christian in their views.

Read the NYT & Washington Post for the past few years and you will see steadily increasing anguish among their writers – anguish at their realization that as Indians are getting more prosperous they are turning to their own culture & thought. You will see their anguish translated into feverish action of using American, British & European power to coerce Indian lawmakers into making & passing increasingly anti-Hindu laws that penalize Hindus, the 80% majority in democratic India. Their ally in this endeavor has been the current White European Christian ruler of India.

And if Narendra Modi proves successful in transforming India, in making India economically and militarily powerful while following the path of Indian philosophy, thought, & culture, then the rest of Asia could follow. Buddhism is the largest religion in the rest of Asia. The holiest places of Buddhism are in India and virtually all of Buddha’s work was in India. And and the symbol of Emperor Ashok, who transformed Buddhism from a local religion into a global religion, is displayed proudly at the center of India’s flag.

The success of Narendra Modi could spark a greater adherence to Buddhist thought all over Asia and diminish the role of White European Christian thought from Sri Lanka, via Myanmar to Southeast Asia & Japan. It could even influence China and the Chinese people into focusing on Buddhist teachings rather than on “western” ones.

This is a look into the future and much of it could prove theoretical and incorrect. But there is no doubt that the success of Narendra Modi would end forever the dominance of White European Christian thought in India. Just as 1947 ended the British physical occupation of India, the election of 2014 could signal the end of Anglo mental occupation of India.

That would not merely be the end of their dream. It would be a waking nightmare for the “liberal” White European Christian establishment. Hence the angst, and fear of  Modi’s success. And so the intense hatred of Narendra Modi and the violence of attacks on him.

Look up the last time so many “western” or White European Christian writers-journalists appeared so worried for the well being of India’s Muslims. That was just after World War II and in visceral fear of India throwing off the shackles of physical occupation by the British. In today’s articles from NYT, WashPost and their trashier counterparts, you hear the echo of similar articles from 1945-1947. They did not matter then and they will not matter now.

If this week’s polls turn out to be accurate, then India will begin its journey towards mental independence just as India began its journey of physical independence in 1947. Is that a positive for the colonial US-British-European Press? We think not.