Last Friday morning we stopped worrying about Iraq and so did the stock market. We were dumb to wonder last week whether the stock market would follow its current pattern and rally to a new highs. Of course it did. In fact, the Dow and the S&P rallied every day this week.

Chair Yellen will get the credit but we would rather give the credit to the lead horse – Mario Draghi. The way we see it, the tone of all financial markets changed when Draghi served notice on May 8. Chair Yellen backed it up this Wednesday by merely moving “from extremely bullish to just bullish” in the words of Larry Fink. She proved to be a worthy wing woman to Draghi by suppressing VIX to 10.60 with her press conference on Wednesday, a 10% drop from just last Friday. How did the volatility ETF close on Wednesday? 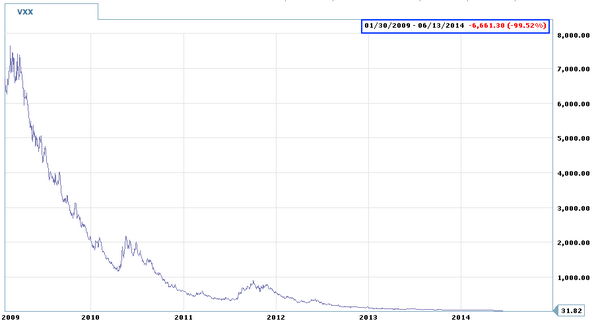 Conversely, how bullish were investors? 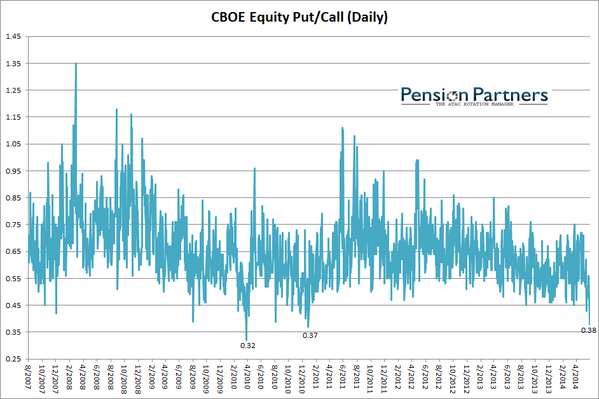 BlackRock had predicted rise in volatility this year and asked clients to buy cheap protection in December 2013. Why didn’t CNBC Squawk Box anchor squad ask Larry Fink about that prediction in their hour long conversation on Friday morning?

Shouldn’t EM currencies be doing well when both the US Dollar and the Euro are being debased by their central banks? They are not according to: 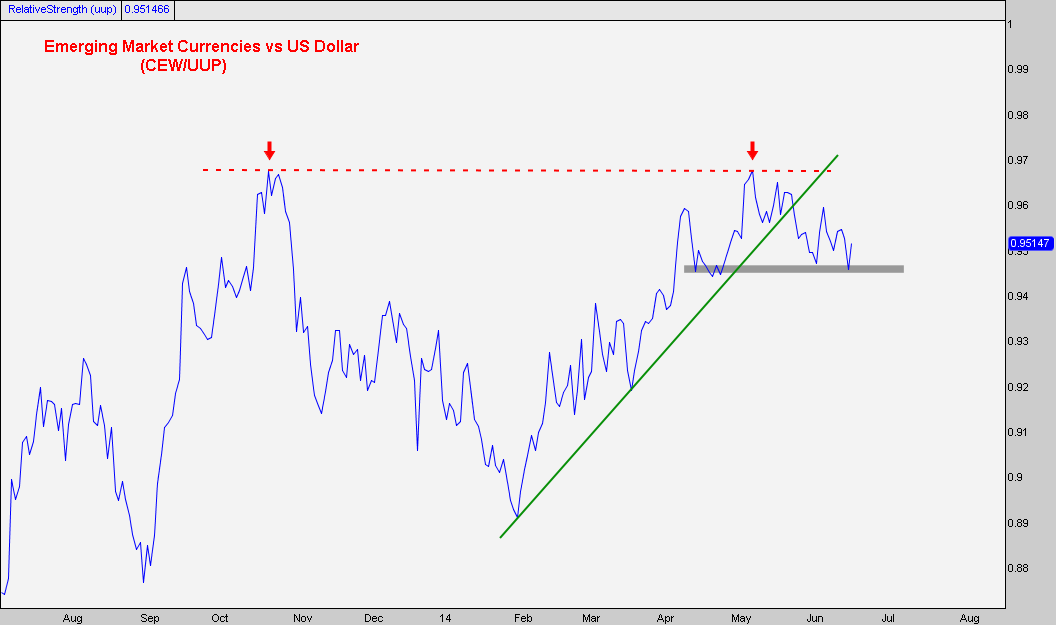 Since Chair Yellen is a labor economist and deeply concerned about the job market, we thought we would insert an interesting tweet & story that we found this week. And yes, it merges the concept of asset rich millionaires & the paucity of jobs:

This is an interesting interview with the Ph.D. stripper especially the excerpt below:

Last week we called Gold & Silver the stars of that week. They acted like meteorites this Thursday. Gold rallied by over $40 on Thursday alone to close up 3% on the week. Silver, perhaps for the first time this year, is outperforming Gold with a rally of 5%+ on the week. The miners were up 9% (GDXJ) and 8% (GDX) by Thursday. But GDXJ gave up half its gains on Friday.

Clearly what Dr. Yellen said in her press conference lit a fuse of short covering. Perhaps the man who said Buy GDX for a short term trade on June 2, 2014 turned with the huge rally on Thursday & tweeted:

He followed up on Friday morning with a formal recommendation in his Bear Traps newsletter. This is more of a risk management move and he still likes GDX vs. S&P.

On the other hand,  George Gero of RBC called it a “repricing” of gold on CNBC Street Signs on Friday and said the repricing gets to $1350 area. His reason – most portfolios are “woefully underweight” Gold.

Keith McCullough of HedgEye has been bullish on gold all year. He said in his What’s the next stop for Gold videoclip on Friday:

Market Anthropolgoy wrote on Friday in their Beware Fury of Patient Position:

Oil has been a strong performer with Brent outperforming WTI as everyone would expect given Iraq & Ukraine. The tweet below is indicative of what we heard from many.

Crude Oil Abnormally Quiet article on Thursday. His article is based on his indicator in the chart below:

But Gasoline is different from oil. So is there any one who can tell us where gasoline will go and when? Thanks to CNBC Closing Bell, we found one, a guru so bold & so certain that he put aside the old wisdom of never predicting both price target & time frame at the same time.

That guru is Kent Moors, Money Map Press global energy strategist. And he told his old friend Bill Griffeth that Gasoline will go to $4 in most of USA by Friday of next week:

Why is ISIS so focused on the Baiji refinery when they already have $2.3 billion*? Moors explained:

And what does Moors think about the current government in Baghdad?

So there is no one to take any decisions in Baghdad? Talk about a confluence of “uncertainty perception factors” to use a term of Kent Moors! By the way what did the Baiji refinery look like last night NY time?

* the $2.3 billion figure comes from Martin Chulov of the Guardian – His article is a must read in our opinion. .

The emotional action in the Long bond post-Fed on Wednesday afternoon was reflected in the tweets below:

The long end continued the rally on Thursday morning until the stronger than expected Philly Fed number hit the tape. The rally reversed with that number and turned into a sell off after a mediocre TIPS auction at 1 pm. The 30-year yield rose by 5bps by Thursday’s close giving up more than what it had gained on Wednesday.

After all this, the Treasury curve closed flattish on the week except for the 30-year yield which fell by 2.4 bps. The channel that had been in place for TL
T between March & June has been broken to the downside. On the other hand, TLT did regain its 50-day moving average on Friday. Does this spell data dependency or inflation fears?

What Dr. Yellen decidedly did is to drive yields down in the short end of the Treasury curve. The 5-year & 3-year yields fell by 5 bps from Tuesday’s close to Friday’s close.

What can you expect but calls for a secular multi-year bull market after a go-ahead from Chair Yellen? We got two such calls on Friday from two smart gurus:

A similar note came from Lawrence McMillan in his weekly summary on Friday:

The only lukewarm note we heard was from Larry Fink on Friday morning when he said, as we recall,

We could not find any one tweeting or talking about a top in the market. Is that a contrary indicator for next week?

View all posts by →