No we don’t mean TD Combo analytics of Tom DeMark. We mean the Tepper-Draghi combo of the two most powerful movers of the stock market. Draghi did everything that most expected of him and more. But it wasn’t enough. And how could it be? As Peter Boockvar said on CNBC Closing Bell “the Fed will have removed $600 billion of QE by next month and the market is focused on ECB?“

The Euro had gone down hard in the immediate aftermath of the Draghi decision. But it turned and closed up on the day. As Rick Santelli explained on CNBC Street Signs, the Euro went higher because  “because they did things that look a bit shock and awey, but basically they’re not“.

Even the stock market was meandering and slowly giving up its gains when the clouds parted and the market heard a voice from the proverbial sky – that “his concerns had been alleviated“.  That he is, of course, David Tepper, the man totally identified as the Voice of the bullish impact of QE on the US stock market.

The stock market heard this message and lifted in a glorious celebration. The Russell 2000 ETF, IWM, rallied by 2 full points in about an hour & half from while the S&P lifted by about a point. The other risk classes hardly moved. This unique behavior of the U.S. stock market on Thursday was captured by GaveKal in their article titled Stocks the Only Economically Sensitive Asset Trading Higher Today.

Why were stocks the only risk asset to go up on Thursday? Because stocks have a champion named David Tepper, the man markets follow when it comes to being bullish due to QE. Yes, CNBC’s Kate Kelly kept stating repeatedly that Tepper was “being very very cautious in what he says” and that he was
“just a little less nervous“. The bull market didn’t care about these caveats and stampeded to where it wanted to go. This mood continued after a non-negative jobs number on Friday. In this 2-day period, the IWM rallied from $112.5 to $116 on Friday afternoon to close at $115.88 while the S&P 500 moved by 2 points.

The shock and awe did not come from Draghi; it was delivered by Tepper. That is why we put the “T” before the “D” in our combo.

Kudos to Paul Richards of UBS who called this on Wednesday noon on CNBC FM-1/2:

Richards went on to predict a move to 2,000 for the S&P and said he preferred Asia, Europe and US stocks in that order.And the Euro? Richards said:

Take the VIX symbol off of your screen, said Carter Worth of CNBC Options Action on Friday post-market. This so-called measure of risk or fear could well be on the verge of being extinct as Tepper extinguished risk from the U.S. stock market for now and the only fear left is:

The $VIX traded with a 10-handle on Friday afternoon after a decline of almost 8% on the day prompting:

One simple reason for the fall in $VIX has been the most simple – Large speculators have been shorting the $VIX without any fear of a spike or even a rise, according to a Bloomberg.com article Hedge Funds Betting on Calm as Volatility Shorts Increase.

We did not find anyone who was prepared to call the fall in the $VIX as capitulation. The only bullish call on $VIX we found on Friday was:

If $VIX does go to the upper bound of its band, what would it do to the short $VIX positions?

David Tepper was the not only guru whose concerns were alleviated this week. Ralph Acampora  acknowledged so on CNBC Closing Bell on Friday afternoon in the least enthusiastic bullish opinion we have heard from him:

As we noted in Section 1 above, Paul Richards is confident of getting to S&P 2000. J
ack Bouroudjian was as bullish as ever on Wednesday on CNBC Closing Bell calling this the most disrespected, most unfanfared rally which has been up 150 points since the April low.

Lawrence McMillan was also bullish in his Friday summary:

But the man, who was bullish on May 10, the man who wrote about 1975 target of his reverse head & shoulders formation, wrote about an inflection point in small caps on Friday:

Keith McCullough seemed ready to issue a sell signal on IWM on Friday morning. But we have no idea whether he actually issued one to his clients. Hear him directly in his video linked in his tweet on Friday:

Emerging market equities outperformed S&P 500 on both Thursday and Friday. After all, the injection of liquidity into the European banking system is positive for emerging market equities. As Tim Seymour of CNBC FM pointed out on Friday, the sell off in EM assets was largely due to fears of liquidity withdrawals from EM by European Banks. He likes Korea, Chile & Peru as laggards that could benefit as money rotates from winners like India & Brazil. His colleague Pete Najarian remains bullish on India as he has been during the post-election rally. Giddy-up Pete! And what a rally it has been, up 5% just this week and 20% for the year.

But interest in EM equities pales in comparison to the flood of inflows into EM Debt funds in the past few weeks. Central Bank liquidity has to go someplace and high yields in EM are so much more attractive than those in the DM space.

As Rick Santelli said this week, there are two basic reasons for the refusal of treasury yields to climb up:

A quietly positive Non Farm payroll number of 217,000 (soothing as Pimco’s Paul McCulley called it) did nothing to shake Rick’s first point. And long rates fell on Friday morning. Then they started slowly rising from about 10:30 am and closed near the highs on Friday. But the 10-year yield did close just below 2.60% and TLT closed just above its 50-day moving average. The 30-year & 10-year yields closed at the same levels as Tuesday’s close with Friday essentially giving up the small rally on Wednesday & Thursday.

How do we interpret this?

We will let the bond market tell us next week. Some of the bears point to the uptick in inflation.

We recall that an uptick in inflation has been a concern of David Rosenberg for 2014. As we noted before, QE is never a positive for long duration Treasuries and the action in Treasuries did change on May 8, the day Draghi served his verbal notice.

But Rick’s second point may come into play for Treasuries. The action in European bonds has been nuts. As ForexLive.com pointed out on Friday:

GaveKal gave a more detailed analysis of why European bond money will move into US. In their well titled article The ECB And Kicking The Dog, they wrote:

So do they first sell off European bonds and move the money into US Treasuries or do US Treasuries sell off on inflation fears and that leads to an ugly sell off in European bonds? The answer depends on whether the 2003 Mission Accomplished analogy of Market Anthropology (see section 1 above) is valid or whether Draghi has once again convinced the markets that the analogy below is incorrect: 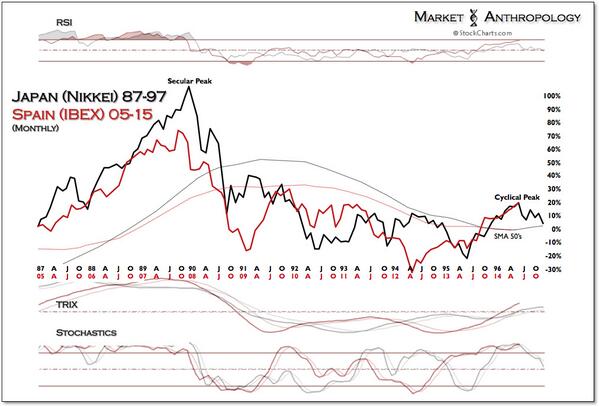 A very negative tone was sounded by Louise Yamada on Tuesday on CNBC Futures Now:

A bullish view came from the same Mission Accomplished article from Market Anthropology on Friday: 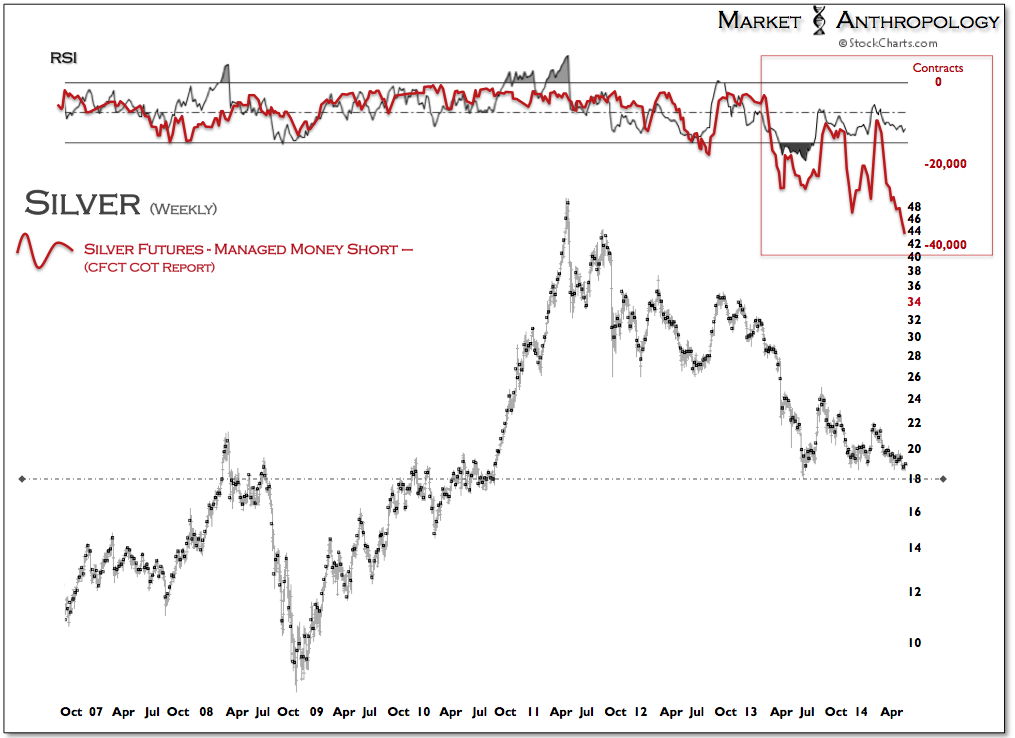