Editor’s Note: In this series of articles, we include important or interesting tweets, articles, videoclips with our comments. This is an article that expresses our personal opinions about comments made on Television, Tweeter, and in Print. It is NOT intended to provide any investment advice of any type whatsoever. No one should base any investing decisions or conclusions based on anything written in or inferred from this article. Macro Viewpoints & its affiliates expressly disclaim all liability in respect to actions taken based on any or all of the information in this article. Investing is a serious matter and all investment decisions should only be taken after a detailed discussion with your investment advisor and should be subject to your objectives, suitability requirements and risk tolerance

How else could we describe these financial markets? This week threw just about everything it could at the markets, a slightly more hawkish Yellen, big technology partnership between old & new Tech, major media buyout offer, shooting down an airliner & a Russia-US/EU crisis, an Israeli ground incursion into Gaza – yet, by the end of the week, the markets were mostly unchanged.  The major trends of the year continued softly – large cap indices up a bit, small caps down a bit; yield curves flattened a bit more, VIX flat for the week. The market’s sangfroid state was shared by Lawrence McMillan in his Friday summary:

But one major streak was broken this week, with S&P moving more than 1% on both Thursday & Friday. Is that important?

The SPY made broke the 50-day moving average & closed at $181.51 on April 11 and then began the rally that continues. So will the S&P go again on a 9% rally to say $215? Detrick did not say but we noticed the following on Friday afternoon: 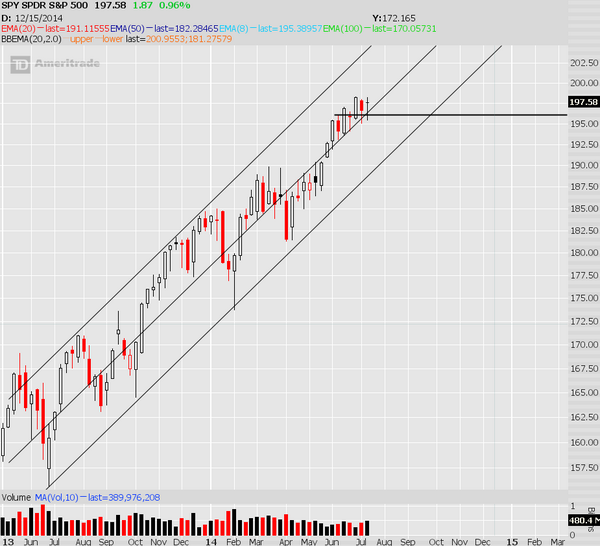 And Kunkle did prove correct in his tweet on Thursday:

Long duration Treasuries had a better week than stock indices this week with the 30-year yield falling to new 2014 of 3.26%, slightly below the 3.29% close on May 28, 2014. The action on Friday did not detract from the big move of this week. Last week, J.C. Parets had written “I have to stick with the bulls. At least for now“. That worked very well. What did he say this week?

The real story in bonds is the drop to 1.16% in the German Bund 10-year yield leading Rick Santelli to say on Thursday:

With both Treasuries & Bunds falling in yield, surely emerging market debt should be doing well. What does this say about EM equities?

The Fed ventured into a rarely trodden area this week with comments on valuation & relative valuation of bonds and stocks:

GaveKal Capital took exception to this analysis in their article Cognitive Dissonance?. They wrote: 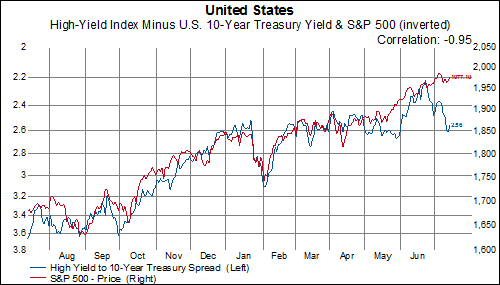 Stan Druckenmiller compared today’s credit markets to 2007 in his conversation with CNBC’s Joe Kernen in their Delivering Alpha conference on Wednesday:

But Druckenmiller doesn’t think today’s bubble is a systemic problem, because it “has not infiltrated the banking system” yet.

The above discusses the specifics of this year’s Humphrey-Hawkins testimony by the Fed. But is this testimony itself important as an inflexion point for markets? That is what Todd Harrison suggested via the chart below in his article on Minyanville.com:

By 4:30 pm, Chair Yellen’s congressional testimony was forgotten because of an amazing partnership announced by Apple & IBM, a wow-type visionary merging of old Tech & new Tech, the much-awaited breakthrough for Apple in the enterprise world & an outlet for IBM’s Big Data capability. Both stocks soared in the after market and opened higher on Wednesday morning, a morning made doubly euphoric by Fox’s bid for Time Warner. But,

The reason IBM stayed up was because of optimism about next day’s IBM’s earnings which fell flat and $IBM fell.

Time Warner ($TWX) shot up on Wednesday morning and actually moved higher, a testimony to Mr. Murdoch’s famous determination and possibility of others stepping in. A more interesting action developed that morning regarding a chart about offers by Mr. Murdoch and the subsequent action of the stock market. The chart was first, to our knowledge, tweeted pre-open by 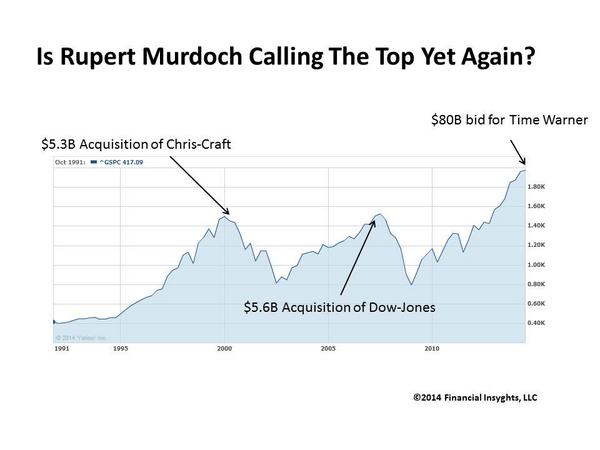 This chart went viral and led to:

A detailed discussion of the above chart can be found in Peter Atwater: The Serious Thinking Behind the ‘Dumbest Chart Ever‘ on Minyanville.

A best place to hear many such is the annual Delivering Alpha conference of Institutional Investor & CNBC. Since we are deemed “untouchable” in the ultimate caste-system sense by CNBC, we prefer to watch & listen on TV. Below is a quick summary of what CNBC broadcast & posted on their website:

Leon Cooperman think that S&P will hit 2,000 this year but:

Gold & Silver opened the week with a huge thud on Monday and fell hard again on Tuesday after the Yellen testimony – recovered some of the losses on Wednesday and exploded up on Thursday to give up some of the gains on Friday. On the week, Gold & Silver fell by 2% & 2.7% resp. The miners dropped even more.

So what does the #1 Gold Timer so far of 2014 (according to Times Digest) say? In his article Fishing Around For a Gold Cycle Bottom, Tom McClellan writes: