Editor’s Note: In this series of articles, we include important or interesting tweets, articles, videoclips with our comments. This is an article that expresses our personal opinions about comments made on Television, Tweeter, and in Print. It is NOT intended to provide any investment advice of any type whatsoever. No one should base any investing decisions or conclusions based on anything written in or inferred from this article. Macro Viewpoints & its affiliates expressly disclaim all liability in respect to actions taken based on any or all of the information in this article. Investing is a serious matter and all investment decisions should only be taken after a detailed discussion with your investment advisor and should be subject to your objectives, suitability requirements and risk tolerance

1. Calls that worked this week

Calls that work quickly are generally rare. We were struck by two that worked this week. One that worked very quickly is 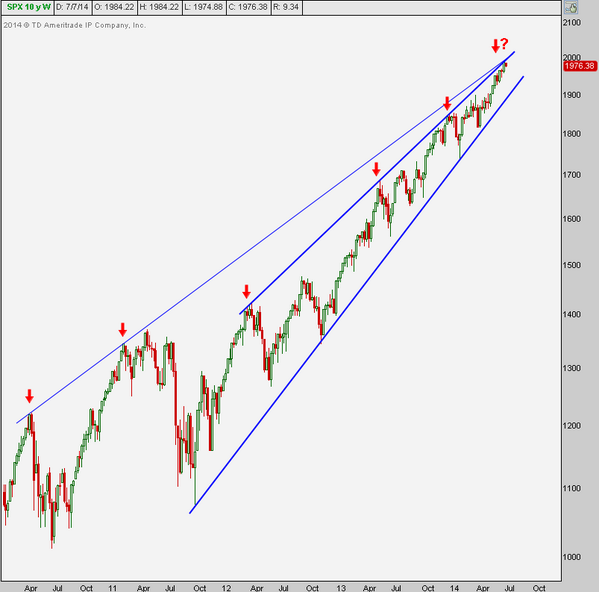 That certainly made money. Perhaps one reason fading S&P this week made money is the warning given two weeks ago proved prescient. We refer to the tweet below:

It became the issue du jour this Thursday with the downgrade of Portugal’s Bano Espirito Santo. Mr. Bilello took a victory lap on Thursday: 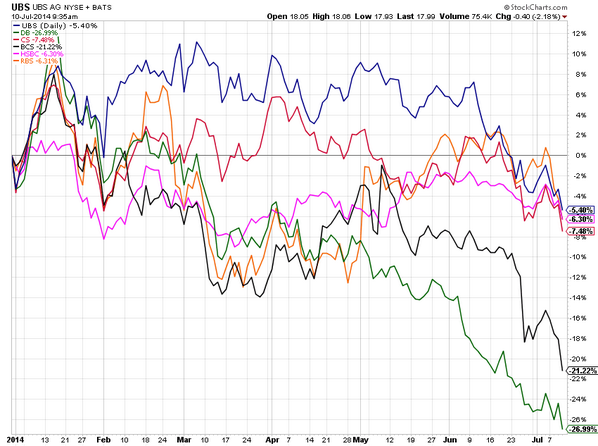 We have seen similar calls fail to work this year. But this week seemed different. Seasonality? 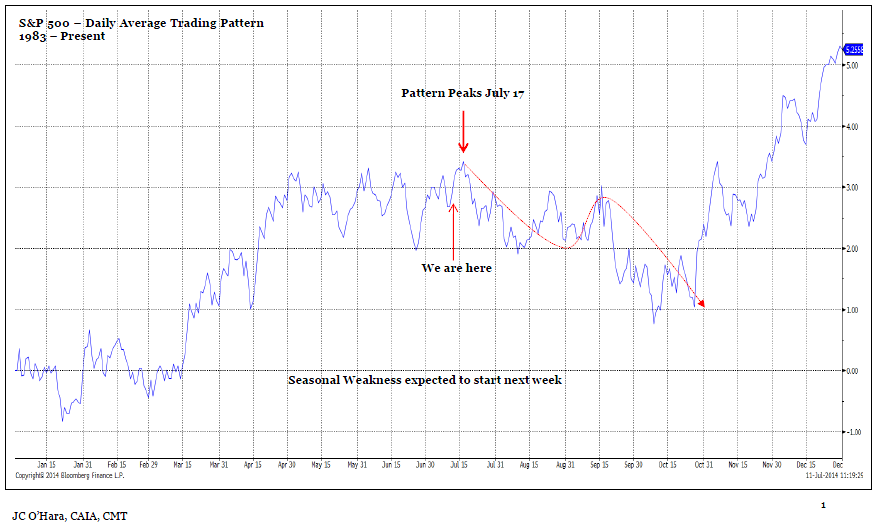 The one big up day this week was on Wednesday, the day Fed minutes were released. The minutes told us that the Fed plans to complete their taper in October but rates will remain where they are. Predictably, stocks, treasuries & gold-silver rallied. But the big winners were gold miner ETFs – GDX & GDXJ closed up 2.61% & 5.52% on Wednesday.

But Larry McDonald was not happy. Read what he said on CNBC Closing Bell on Wednesday afternoon:

Veteran hedge fund manager David Gerstenhaber was not worried about a credit problem. His main worry is loss of Fed’s credibility as he told CNBC Squawk Box on Friday:

But is the Fed deliberately “risking credibility” as Gerstenhaber put it? David Rosenberg of Gluskin Sheff put it differently on Monday on CNBC SOTS:

Well, if inflation is on its way, shouldn’t you be thinking about TIPS? That is what Pimco is suggesting and that is what was suggested in the tweet below:

These are all smart folks. In contrast, we are quite simple. From what we have seen, the moment the Fed hints about bringing forward its timetable for raising rates, the 30-5 year yield curve flattens. That is what happened after Dr. Yellen’s comments on March 19 and after the 288,000 jobs number last Thursday. This is weird because the 30-year bond is the security most vulnerable to inflation and as David Rosenberg argued on Monday:

But what if the long end of treasury curve is suggesting the reverse – that rate hikes by the Fed will actually end up slowing the U.S. economy & that inflation Rosenberg sees might actually be a short term spike? We think Dr. Yellen is thoroughly aware of the message of a flattish or inverted yield curve and she will not, in our opinion, raise rates as long as the long duration yields remain dormant. But if David Rosenberg is correct and if the bond vigilantes force short maturity yields to rise to flatten the curve, then Dr. Yellen may get what she dreads most whether she raises rates or not.

Or the long end of the curve may be smelling what Tom McClellan argued on Friday in his Inflation Arriving For A Short Stay article:

Does Dr. Yellen see a similar risk? Is she concerned that if she raises rates in early 2015 then she might be tightening into a period of declining inflation and thereby actually create a slowdown in the economy? That is what the Fed did in early-mid 2008 creating a problem that led to the rant of Jim Cramer in July 2008. Dr. Yellen lived through that period and, we think, she is aware how bad a wrong tightening could be for the economy and credit markets. As we recall, the long end of the Treasury curve began sending its message in July 2007. Bernanke did not get that message and so Cramer ended up screaming in July 2008 that “… he has no idea how bad it is out there… “

We may be fanciful, wrong, and/or dumb here. But the yield curve spread touching its 2009 low with long yields moving lower is not to be taken lightly.

David Gerstenhaber was clear in his conversation on CNBC Squawk Box on Friday:

On the other hand, ElliottWave-Forecast,com wrote:

We remind readers that 2.44% – 2.66% is Rick Santelli’s range and his stand is that break in either direction would be important.

A two-sided argument came from J.C. Parets in What Do You Think About Bonds?

The above comments refers to his chart below. The U.S. equity market had a so-so week. Despite the sharp rise in volatility, the S&P did not even decline by 1%. The Russell 2000 however fell by 4% on the week. Can S&P advance while Russell 2000 declines? One said No: 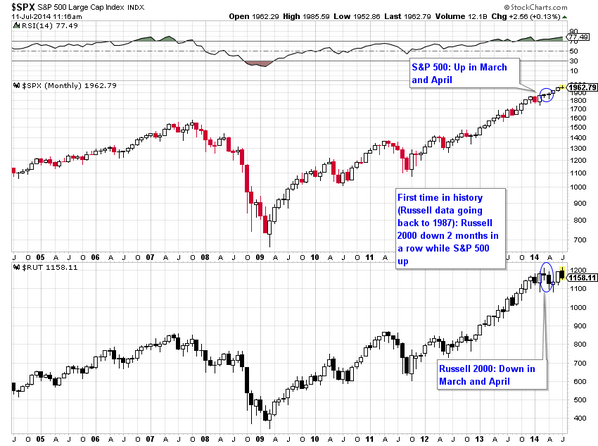 David Gerstenhaber is bullish for this year with year-end S&P target of 2,000 and bullish for 2015 as well as he told CNBC Squawk Box on Friday:

Laszlo Birinyi is still bullish with year-end S&P target of  2,100 but suggested trimming fat on CNBC FM – 1/2 on Monday, July 7:

Lawrence McMillan was succinct in his Friday commetary:

And now we come to Marc Faber who is calling for a 30% decline in the S&P:

Brazil’s collapse against Germany in the world cup will be remembered for ever by every one who watched it. Brazil’s team may have lost but the Bovespa might be a winner. Why?

Later on Wednesday on CNBC Closing Bell, McDonald put a buy on Brazil:

He got company the next day:

Parets made his case for this trade and for the S&P seasonality (see section 1 above) on FBN Closing Bell on Friday. He also picked Argentina over Germany in the World Cup final.

Remember what Jeff Gundlach said to his investors on Tuesday, June 10:

A break of $1,330 was important to Gundlach, as we recall. A week later, Jeff Kilburg said on CNBC Futures Now:

Well, Gold broke through $1,330 decisively and closed at $1,339 or $1,340 depending on which quote service you follow. Will we see $1,390 as Kilburg predicted so expansively? Will Jackie DeAngelis, host of CNBC Futures Now, ask Kilburg next week?

Gold has rallied for six straight weeks and the charts look good. But what’s next?

But what about Oil, the loser since Iraq worries subsided? 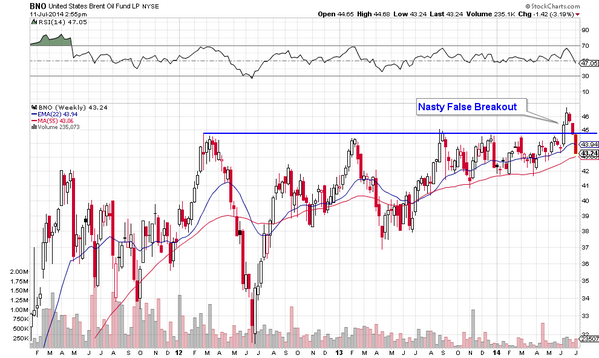 The other view from Market Anthropology in their Sweet Spot article: