This week, Secretary of State John Kerry visited India to attend the Fifth India-US Strategic Dialogue. The impetus behind the visit was clearly stated in the Joint Statement – “The two sides recognized that the decisive mandate provided by the Indian people to their new Government provided a unique opportunity to re-energize this relationship.” The goal was stated unambiguously by Secretary Kerry “US & India can and will be indispensable partners of the 21st century“. 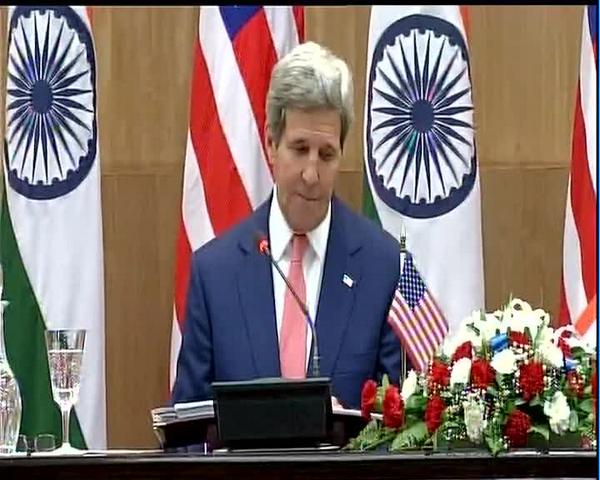 The timing of the visit was clearly driven by the recent Indian election. As Evan Feigenbaum wrote this week:

India was not on top of the agenda of President Clinton, writes Rudra Chaudhuri in his book, “Forged In Crisis“. In fact, as we recall, President Clinton had remarked that India’s democracy created problems for America while Pakistan was much easier to deal with. Then came India’s nuclear tests in May 1998 and President Clinton was outraged. As Chaudhuri writes,

.But, according to Joseph Ralston, then Vice Chairman of the US Joint Chiefs of Staff, the nuclear tests “did more to bring our two nations together than anything else“. As Chaudhuri adds,

This backchannel paid handsome dividends in the 1999 military infiltration by NPakistan into India’s Kashmir.  As Chaudhuri writes, “… for the first time in history a US president unequivocally took India’s side in an India-Pakistan conflict“. President Clinton’s unambiguous and uncomplicated position on the war had led, as Chaudhuri quotes Walter Anderson, “to an immediate change of perception in India“.

Less than a year later, President Clinton visited India, the first US president to do so since Jimmy Carter in the late 1970s. Prime Minister Vajpayee stated that the visit “marks the beginning of a new voyage in the new century by two countries which have all the potential to become natural allies“.

The Bush presidency took US-India relationship to a new level that was beyond what the Indian establishment could have imagined in 2000. The difference between Bush and Clinton is best explained by Chaudhuri,

And it was the Bush White House, especially Condoleezza Rice, who drove this transformation, not the State Department:

The efforts that began in 2000 took six years to deliver results. And the result was the United States and India: Strategic Partnership in 2006. President Bush declared then: This led to the final ratification of the U.S.-India Civil Nuclear Agreement in the fall of 2008, a concrete realization of the US-India Strategic Partnership envisioned and implemented by President Bush.

President Obama came to power with a completely different mindset. And his cherished goals were in direct and fundamental conflict with India’s strategic imperatives. This simple and straightforward reality was discussed in our April 2010 article titled Obama’s India Problem or India’s Obama Problem?  Predictably, the US-India relationship lost steam and got sidelined.

This malaise in US-India relations reminds us of the 1992-1997 period of the Clinton Administration, a period in which India was viewed as an irritant while NPakistan was viewed as potentially helpful & worthy of fair treatment. The presence of Secretary Hillary Clinton and her efforts for a US pivot to Asia kept India on Obama’s radar. Yet, India was perceived as a problem or even an enemy by the NeoLibs who were the backbone of the Obama presidency.

Then the Obama Administration got a shock, a shock that rivaled the impact of the 1998 nuclear tests on the Clinton Administration. Narendra Modi, the man vilified by the NeoLibs, won a sweeping mandate from the Indian people in May 2014. Being against a regional Chief Minister was one thing but being vitriolically against the Indian Prime Minister elected with a thumping majority was unthinkable. And Shri Modi is a proven administrator capable of making India both economically and militarily strong.

And so, just like the Clinton Administration did in 1998, the Obama Administration began the process of recalibrating its posture and reached out to the Modi Administration. Secretary Kerry’s visit to India was an important step in the process. The pivotal step would be the visit to US of Prime Minister Modi and his meeting with President Obama.

In a sense, the US-India relationship has nowhere to go but up from its current level. We trust the Obama-Modi meeting does indeed take it to the next level. And if it does, then perhaps we can see a triumphant visit of President Obama to India, a visit that exceeds the “Clinton mania” that engulfed India in 2000.