1. Did anything happen this week?

Look at the results of the week and you tell us – Dow, S&P up more than 1%, TLT up 1%, Treasury curve flattened, U.S. Dollar up 1/2%, Euro hardly moved, Oil yawned, Volatility dropped by over 8% – par for this year’s course, right? After all the commentary about the Fed statement & the mid-week action in the Treasury curve, the end of week doesn’t reflect any real change. Even the Scottish vote turned to be a yawner for the GBP which fell slightly post-verdict.

Contrast this with the commentary:

Notice the above comments were voiced on Thursday and sounded perfect. Then came Friday with a 2% rally in the 30-year zero coupon strip. The 30-year yield fell 7 bps & the 10-year yield fell 5 bps on Friday.  Friday changed the week’s banner from a bear-steepening of the curve engineered by Chair Yellen to a bull-flattening on the week from 153 bps to 147 bps on the 30-5 year curve. This amazing action went unnoticed in the euphoria of the biggest IPO in the history of the USA.

What triggered this fall in yields, we don’t know? But it must have spelled “rolaids” to Bill Gross who bravely recommended buying the belly of the curve on post-Fed Wednesday. It must have also comforted tweeters like:

The debate here is not just about rates but also about the direction of the U.S. economy:

Marc Faber made a similar point about the U.S. Dollar on CNBC Squawk Box on Friday:

Scott Minerd of Guggenheim partners argued for the doves on Thursday via his chart of the week titled Labor Market Index Suggests No Rate Hike until Late 2015 or 2016:

Despite all the above, we still don’t get why long treasury yields fell so hard on Friday. Perhaps it was simply the inability of the 10-yr yield to break through 2.65%, its 200-day moving average despite all the fundamental reasons to do so this week.

First and foremost, a short term cautionary note from Ryan Detrick in his article –Why Next Week Is The Worst Week Of The Year For Stocks:

To his credit, Detrick told all of us this on September 18. At the other end of the time spectrum is Louise Yamada who said the following on CNBC Futures Now on Thursday:

Referring to the chart below, Yamada said on CNBC Futures Now:

The Dow and S&P rallied 1.7% and 1.2% resp. last week but the Russell 2000 fell by 1.2%. Does this divergence matter? Bespoke didn’t say but provided the following not-so-warm data on Friday:

The October period was pretty brutal in those years as we recall. Scott Minerd used October to make a timing call this week:

If Russell 2000 is one warning signal, margin debt is another. It was used to make a Sell All Equities call this week per: 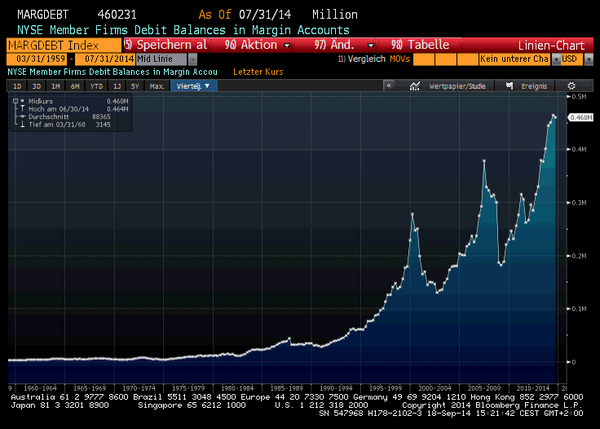 Marc Faber used the margin debt levels to discuss a difference between 2007 & now:

According to Across the Curve , IMF has come out with “a new paper which chronicles a broad based slowdown in Emerging Market economies”:

Gold & Silver had a horrible week again with Silver down 4.2% on the week. Is this what Tom McClellan would describe as “the business of putting in a bottom“? Is it a case of a hated asset class getting to a really hated state? Or is this simply a free fall?

We have heard different terms for ISIS but we had not heard the term Tom McClellan used this week:

He goes on to suggest that Gasoline in due for a rebound in his article: