How fast does contagion travel & how fast do the world’s central banks panic? We saw it in the past three weeks. We wrote about the deflation contagion sweeping the world on October 11, 2014. Four days later,  literally 4 days later on Wednesday, October 15, yields on Treasuries utterly collapsed. Just look at the photo below: 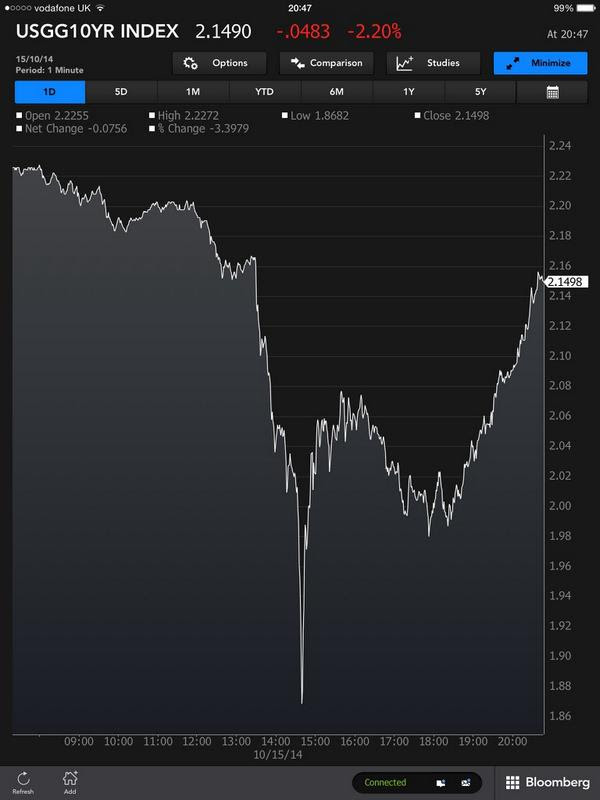 The 10-year U.S. Treasury fell to 1.86% in a fast waterfall decline & prices of the Treasury bonds exploded. It lasted just a few minutes but enormous amounts of monies were lost & made in these few minutes. We have never seen anything like this in a market as massive as the U.S. Treasury market. This was a screaming explosion of investor panic about deflation in Germany & Europe – a panic to buy U.S. Treasury bonds.

Nothing scares the U.S. Federal Reserve as Treasury yields collapsing in panic over deflation. As we wrote three weeks ago, their first mission is to create higher inflation & protect the USA from ravages of deflation scouring Europe, Japan, & now China. So they panicked and, the very next day, they sent James Bullard, a regional Fed President, to soothe the stock market with talk of additional QE (Quantitative Easing) or pouring money into markets.

There you have it, Ladies & Gentlemen, the new economic order. What matters to the American economy, what only matters to the American economy, is the health of the U.S. stock market. When loan growth is moribund in the real economy, when debt load of the U.S. government is 17 trillion dollars, when companies are not investing anywhere near they should, when interest rates are already at zero%, what else does a Central Bank have? The only realistic channel left to the Fed is the U.S. stock market, the measure of asset prices in America. Now if that goes, then you have a real problem. Hence the main prerogative of the Fed has become to maintain the level of the U.S. stock market.

This is anathema to traditional economists. But it has worked, so far. This week, the GDP growth of the U.S. economy came in at 3.5%, a figure Europe & Japan would kill for.

Look at interest rates in the USA vs. those in Germany & Japan. The 10-year yield in the US is now at 2.33% vs. 0.84% in Germany and 0.46% in Japan. The 5-year yield in US is 1.61% vs. 0.12% in Germany & 0.12% in Japan. These abysmal yields in Germany and Japan show the ravages of deflation – prices coming down, leading to lower sales as people wait for even lower prices, the weakening of consumer demand, leading to rising debt levels & attendant bank stress. When demand falls in an economy, interest rates fall & stay low.

This has been the story in Japan for decades. That is why the debt load in Japan is now more than 240% of Japanese GDP. And the picture is getting worse, not better. So the Central Bank of Japan acted on Friday.

The word “acted” is so insipid. What Governor Kuroda did was launch a bomb. The world saw the resultant explosion in global stock markets. All stock markets, developed & emerging, US, European, Asian markets, rallied. What did Japan do?

First they increased their QE or purchases of Japanese government bonds by 25%. How big is this? Now the central bank of Japan would be buying nearly every Japanese bond issued by the Japanese government. Not from the Japanese Government but from investors who buy these bonds from the Japanese Government. Meaning Japan issues bonds, investors buy them on the issue and then the Bank of Japan buys these bonds back from investors. This is called free money or, in central bank lingo, adding liquidity to financial markets.

But this is not the big story. The U.S. began this under Bernanke & Japan began this in November 2012. No wonder the Japanese stock market was up 40% in 2013. But this is not Friday’s stunning surprise from Japan.

The surprise was the announcement that the huge Japanese Pension fund has increased its allocation of both Japanese & overseas stocks from 12% to 25%. This giant entity will now spend 26% of its assets to buy Japanese & international stocks. Now you understand why the world’ stock markets rallied so explosively on Friday.

Why is Japan doing this? They need to get the nominal GDP up to 5% to lessen the crushing load of Japan’s debt burden of 240% of GDP? And the only vehicle left to them is to lift the Japanese stock market and lower the value of their currency, the Japanese Yen.

Yes, that is the side effect. The Japanese Yen fell by 2.6% on Friday, a huge one-day drop for a major currency in the largest financial market in the world. This is great for Japanese exporters and destructive to other Asian countries, especially China & Korea. Japanese companies like Panasonic are already moving or seriously planning to move their operations from China back to Japan. Because, a weak Yen makes it cheaper to manufacture in Japan. Korean companies, like Samsung, LG, Hyundai, will face less expensive Japanese products due to a weaker Yen.

Japan is ok but the real crisis is in Europe. So markets are expecting Draghi, the chairman of the European Central Bank, to launch QE in Europe or at least promise to do so in the December ECB meeting. He could surprise markets and announce something next week. If he does, the stock markets will roar.

4. Is this stock-market juicing helping the real economies?

The Fed believes so and argues so. Look at the US GDP, they would say. A growth of 3.5% is just great when compared to Europe & Japan. The unemployment rate is falling and the slack in the economy is being tightened slowly.

Then why is the actual GDP falling below their forecasts? Look at the graph below from Vox via Washington Post: This shows a US economy that does not seem to recover on its own, meaning without continuous pouring of money into financial markets. And what is this stock market pumping doing to income equality?  The chart below is from Saez and Zuckman via Washington Post: . Middle class is poorer today than it was in 1987

The drop in the relative wealth of the Bottom 90% began during the financial crisis of 2007. Why? Because they don’t own stocks, or as much as the rich own. The average American household income since 2008 has fallen from $57,000 to $51,000 while the S&P 500 stock index has gone up 300% since the lows of March 2009. This is the principal reason for wealth disparity in America and it is directly due to the policies of the U.S. Federal Reserve. By the way, the wealth disparity in Europe & in emerging markets is much worse.

5. The Great World War of Today

The Fed knows this but won’t admit it because they can’t admit it. The only way to answer this charge is to present the alternative – that everyone can get poor simultaneously. That is really the only way to reduce wealth & income disparity today.

There is nothing else the Central Banks can do. They have already taken interest rates to virtually zero. Their governments are so laden with debt that fiscal stimulus is virtually impossible. So the old fashioned solution of handing free money to every citizen is impossible, at least in the developed world.

Therefore, the only way, the central banks argue, is to raise & keep raised the value of the stock markets in the hope that the wealth created by stocks will eventually trickle down into real economies and create consumer demand & some inflation.

Folks, this is the great war of today – a war against encroaching deflation, against weakening demand; a war that is being fought by the only weapon the central banks have – pouring monies into financial markets to raise the prices of stocks & financial assets.

What if they win this war? What if they can light the fire of inflation? If they do, it will be in America first. That might cause a fire, a fire in which US interest rates rise, bond prices fall & stock prices fall as money comes out of financial assets to enter the real economy with wages rising and commodity prices rising.

What if they don’t win this war? Then the world enters a slowdown, an ice age of slowing demand leading to slowing prices leading to businesses winding down leading to bank crisis & debt crisis and deepening unemployment. Europe may already be on this path according to the chart below from Maddison Project, Eurostat via Washington Post:. Remember what the global central banks are doing has NEVER been attempted in the history of the world. So no one knows how this massive unprecedented experiment of pouring money will end. This is not just us saying. Alan Greenspan, the man who created the first bubble in 1999, the man whose policies created the housing & credit bubbles in 2004-2005 is now saying the same thing – that no one can tell how this massive stimulus will be unbound.

Look at how we are beginning to handle the Ebola contagion. That is because medical science knows how to manage such contagion. But no one really understands how financial contagion spreads and how to prevent it from spreading. Read what Wharton professor Franklin Allen said about their research on “Financial Connections and Systemic Risk”:

Remember this when Financial TV tells you to forget about the impact of Europe because trade only accounts for 2% of US economy. The world’s Central Banks know that they don’t know (as Greenspan is telling us now) and that is why they are pushing panic buttons and pouring in vast monies into their stock markets.

But what about the currency effects of their success? What Kuroda did this week shot the Yen down creating serious problems for China, Korea & other Asian exporting countries. What Draghi may do will trash the Euro creating problems for American economy & its exporters. Contagion from currencies is what the world understands as professor Allen points out:

Every one understands military war but that hasn’t stop the world from creating new ones. While “we” may understand currency wars, that may not stop us from waging the next round of currency wars. Ironically, the next currency war might start because of what the central banks are doing to maintain their stock market levels & lowering the value of their currency.

As we said, no one knows how today’s unprecedented experiment of money pouring will end. All we know is that it will be fun to watch if you remain financially safe and gut-wrenchingly volatile if you are financially extended.

Watch the 30-year Treasury bond yield and the spread or difference between the 30-year yield & the 10-year & 5-year yields. These two spreads will tell you whether the Fed’s policies to create inflationary expectations are working or not. The 30-10 year spread was 0.94% on December 31, 2013 and the 30-5 year spread was 2.23%. Today, these spreads are 0.73% and 1.45%. This severe drop tells us that the Treasury market is voicing its skepticism about the Fed’s chances of creating a self-standing recovery in the US.

The best indicator of forward inflation is the 30-year Treasury yield. And what is this indicator saying according to John Lekas of Lekas Capital:

Actually, the bond markets are disagreeing with the global central banks. That is why the German & Japanese 30-year yields are 1.76% & 1.59%, much lower than the US 30-year yield of 3.06%. So if we are to see inflation before we see Godot, it will be in the US.

* For those who want to understand what deflation or steadily dropping prices do an economy, we suggest a simple short article Why Deflation Matters Is Such A Big Worry for Europe from NPR.