The word melt-up seems so mellow & slow, doesn’t it. That may be why the renowned day-trader tweeted:

And some called it for us just before the market crashed up:

Then the tweet on Tuesday afternoon that drew attention to an earlier article from QuantifiableEdges titled A Fed Day Setup That Has Seen SPX Higher 3 Days Later Every Time Since 1982:

But what about on Wednesday afternoon as the Dow was in a 300+ point rally? That signal & this week’s spike in VIX told you that the year-end rally was coming. The sell-off on Tuesday afternoon was a perfect set up to buy if you followed the smart folks above. Kudos & thanks to these traders.

Kudos also to Larry McDonald who, in his proprietary Bear Traps newsletter, recommended buying XLE on Monday and selling it on Friday.  His thesis as he explained on CNBC Closing Bell on Friday is that these are bear market rallies in Oil.

We have to give a shout out to Jack Bouroudjian who has been right, passionate, and simple for the benefit of simple minds like ours. He summarized it simply on CNBC Closing Bell on Friday:

2. Where does this rally go?

Tim Seymour of CNBC FM seems to concur because he said on Friday afternoon “I would be selling this market from Monday“. Lest people accuse him of being a Grinch, he hastily added that he was really bullish, more bullish than his colleagues. Paul Richards of UBS was not so two-handed and said succinctly on CNBC FM 1/2 on Friday:

What about the intermediate term?

Bespoke used the following chart in their article A Typical December:

Chad Gassaway made a similar case in his article Monster Gains Lead To Further Increases In Price:

How about a level? 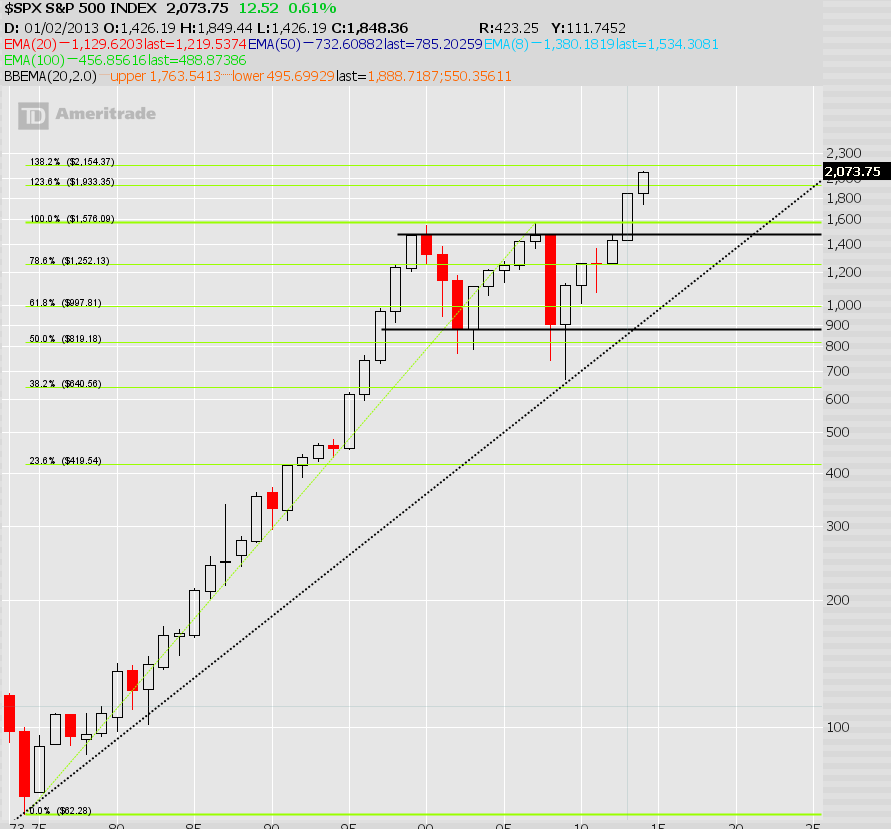 Josh Brown of CNBC FM 1/2 referred to the talk on Friday about a breakout in the Russell 2000:

Getting back to a two-handed analyst, read An Unprecedented Rally Part 2 by Dana Lyons: He gives us three points to ponder:

The Dow rallied by over 700 points on Wednesday-Thursday. When were other rallies of this magnitude?

It seems Chair Yellen was fed up with this talk. That is why she seemed edgy in her presser. At one point she became almost nasty when she said according to the dictionary a couple means two. She was more hawkish in her comments than what was reflected in the Fed statement:

So why was Dr. Yellen so hawkish to the point of sounding fed up? Perhaps because, as Richard Clarida of PIMCO said on BTV Street Smart on Thursday:
David Rosenberg shares this inflation view as he wrote in his Friday’s musings:
Clarida’s “fed up” view of the Fed was what Jeffrey Gundlach said two weeks ago on CNBC:

Because Gundlach thinks that Fed will raise rates when they should not, his biggest surprise for 2015 was:

But is Chair Yellen that irresponsible? We doubt it and so we fall in with Rosenberg & Rickards. The bond market is also with us because both the 30-5 yield spread & 30-10 year spread flattened hard this week by 11 bps & 7 bps resp.

If you think Jim Rickards was nuts to call for QE4 in 2016, read what Larry McDonald tweeted on Friday:

As he tweeted pre-Fed on Wednesday: 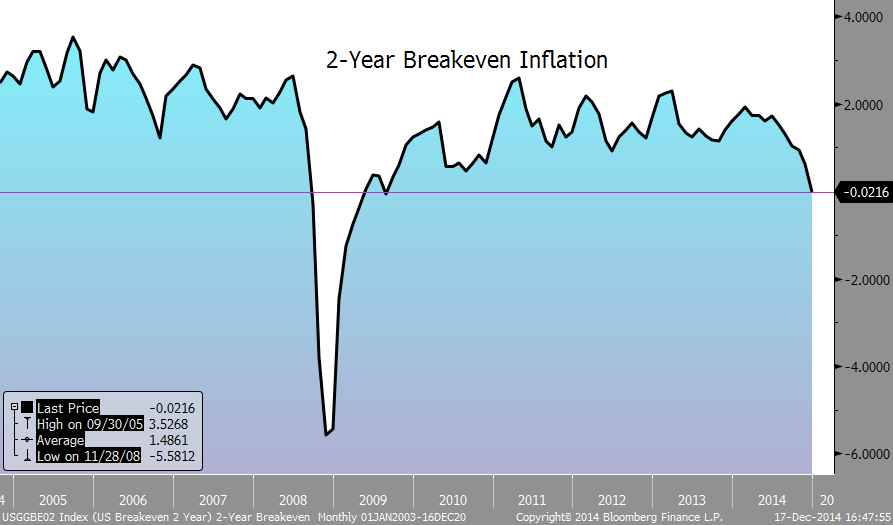 And this is before headline inflation comes in negative in March-April as Richard Clarida expects. 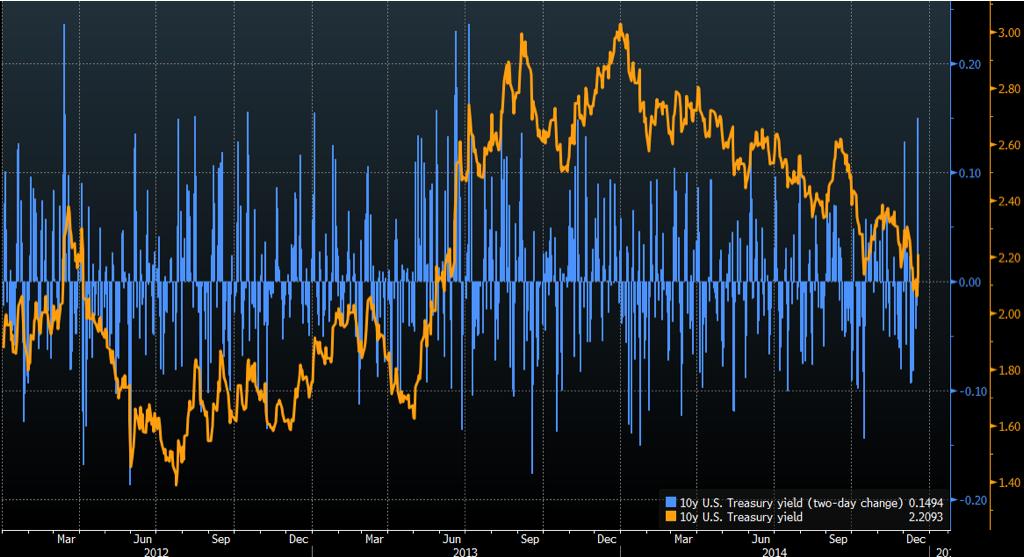 Then came Friday and with it the usual Friday rally in Treasuries. Naturally the best performing duration of 2014 was also the best performer of this week with a mere 2 bps rise in the 30-year yield. The 5-yr & 3-yr jumped up by 14 & 12 bps resp. Thus the 30-5 curve flattened from 122 bps to 111 bps and the 30-10 yr curve flattened by 7 bps from 66 to 59. In other words, the more things change in 2014, the more they stay the same. That includes short positions in Treasuries per Deutsche Bank:

Since a picture is worth many words, 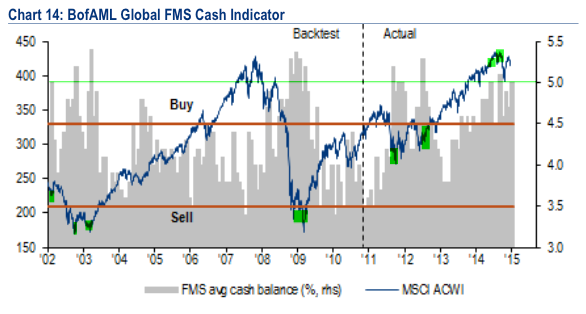 Is this why Charles Biderman made the following prediction to Rick Santelli on Tuesday?

Treasuries are fine but what about High Yield, the sector that drove much of the decline in risk assets last week? Dr. Yellen waved her magic wand and all became ok in the high yield world. In the words of Bespoke, junk bonds had their best day since August 2011 on Fed-Wednesday:

Oil did rally somewhat but oil stocks had a great week. USO & BNO were up by 37 bps & 45 bps while OIH & XLE rallied by 11% & 8% resp. on the week. When conditions change, smart investors change their minds as Dennis Gartman said on Friday on CNBC Closing Bell:

As their promo portion said: Larry McDonald called this rally in oil a bear market rally on Friday on CNBC Closing Bell and said “oil goes to $45 in the next six months and base“. David Rosenberg came to a similar price range on Wednesday but from a positioning perspective:

If oil stabilizes around current levels, it would mean. according to David Rosenberg: