1.Long-Short Trade of the past two weeks

Long TLT-Short SPY is that trade. A higher beta version would be Long Zero Coupon Strips vs. Short Russell 2000 or Short Transports. The long treasuries part of the trade seems to have fundamental support in the weakening trend in economic data and the increasing chatter about a recession. The short stocks component has pure price momentum driving it besides weakening data as well as support from damage to correlated asset classes like Oil, High yield & China.

Why this divergence? Shouldn’t Treasury yields have dropped much faster with money running into Treasuries from the waterfall decline in oil, the fast decline in stocks and the daily liquidation of high yield bonds? Is the Treasury market less impressed with the recession in US talk or is it simply the constant selling of Treasuries by China to repatriate reserves?

If Treasuries don’t have the momentum they should, are they at risk of a selloff? And will a rebound in stocks be a catalyst of such a sell off? Interestingly Tom McClellan discussed the reversal in both legs of this trade on two different occasions. His article Groundhog Day in T-Bonds discusses the possibility of such a sell off based on his observation that “T-Bond prices are repeating the pattern of a year ago “.  His article points out:

McClellan said the following regarding stocks on CNBC Closing Bell on Thursday:

In other words, the month of February should see a uptrend in stocks and an ugly sell off in T-Bonds. We stress that he did not link his two forecasts and may not even be aware of how symmetric his words were. So if our logical extension fails, the fault is ours & not his.

Raoul Pal is also waiting to short S&P until after a bounce in stocks he expects in February. His long term target for the 10-year yield is now 1/2%, not in 2016 but in 2017. The rest of the world shows 10-year yields at 1/2% and so why not the US? So many indicators are suggesting a recession he says & there will be a gap of 6-9-12 months for the transition of the Fed from tightening to neutral to easing. Besides, the economy is structurally weak and inflation is structurally low.

Jeff Gundlach thinks the 10-year treasury yield is coiled for a big move. He places 55% odds on the yield breaking to the upside. But he does see some downward momentum in the 30-year yield for the next few days or weeks ahead.

So what US factors might cause a short term top in T-bonds in the next couple of weeks? The Fed could sound dovish yet confident on FOMC Wednesday, January 28 and then a decent jobs number could erase some recession fears on Friday, February 6.

Scott Minerd of Guggenheim Partners was not sanguine about a stock rebound in his appearance on CNBC:

But he dismisses the recession possibility and recommends Bank loans and even high yield:

Speaking of high yield closed end funds, Bill Gross had recommended three such in his earlier conversation with CNBC’s Brian Sullivan. What are their distribution rates now & what are their discounts to their NAVs?

This week, Jeff Gundlach emailed Scott Wapner of CNBC FM 1/2 saying junk bonds should not be bought until they stop going down every day. But, as we recall, Gundlach had recommended a long closed end high yield funds vs short S&P trade at that time. More on this in the next section.

Michael Contopoulos of BofA is still bearish on High Yield bonds. He told CNBC FM that “we are at a fork“:

His call is convergence:

The sharp sell off on Friday in US stocks was led by financials with Citibank down almost 7% despite decent numbers. Credit quality of high yield portfolios of banks is now a matter of concern. 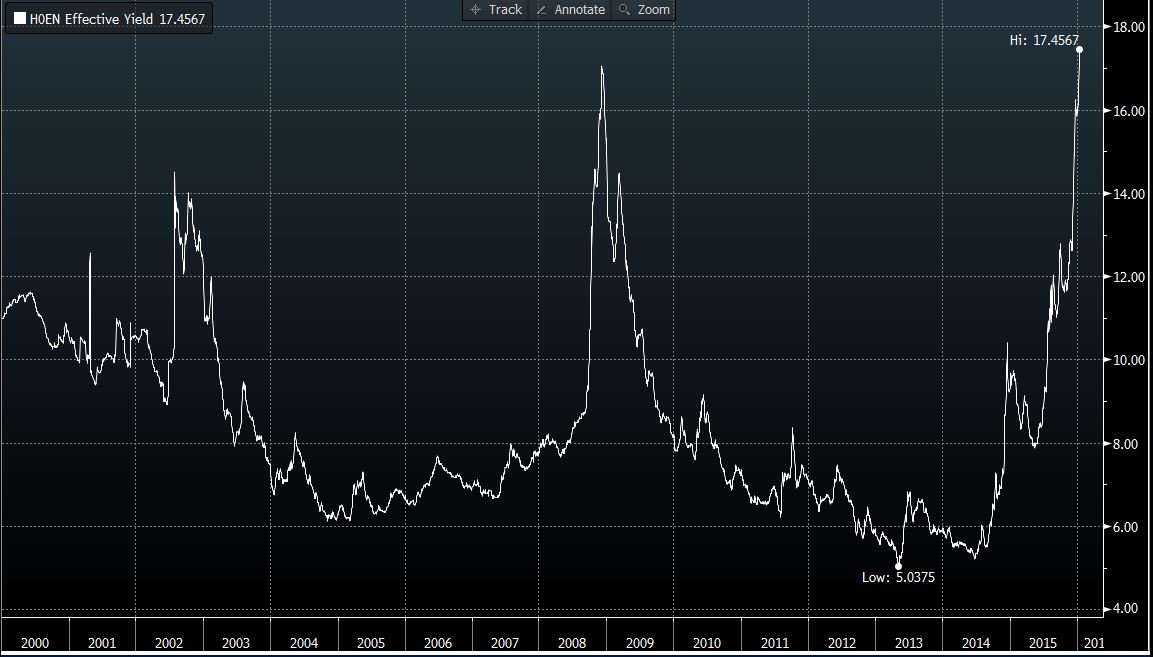 Since high yield is correlated to Oil, shouldn’t another version of the Gundlach trade be Long Oil vs. Short S&P? That is precisely what Quant guru Marko Kolanovic of JPMorgan recommended on CNBC FM this week:

Calling a bottom is notoriously difficult. Jeff Gundlach said mid week that a short term bottom was reached on Wednesday. Thursday seemed to suggest he was right. Then came the sick decline of nearly 5% on Friday. Why did Oil collapse so badly? Did it have anything to do with the conclusion of the Iran deal this weekend and the eventual release of Iranian oil into world markets?

Jeff Currie of Goldman Sachs was interestingly less bearish on oil on Friday. He said he was “starting to see makings of a capitulation” and stated that “material declines are behind us“. He added “a drop from $30 to $20 is significant from trading perspective but not from an economic perspective“.

After a horribly ugly action on Friday, speaking intelligently about a short term bottom seems useless. But that is not the most important point in protecting capital:

But sentiment is reaching levels that have created a bounce in the past: 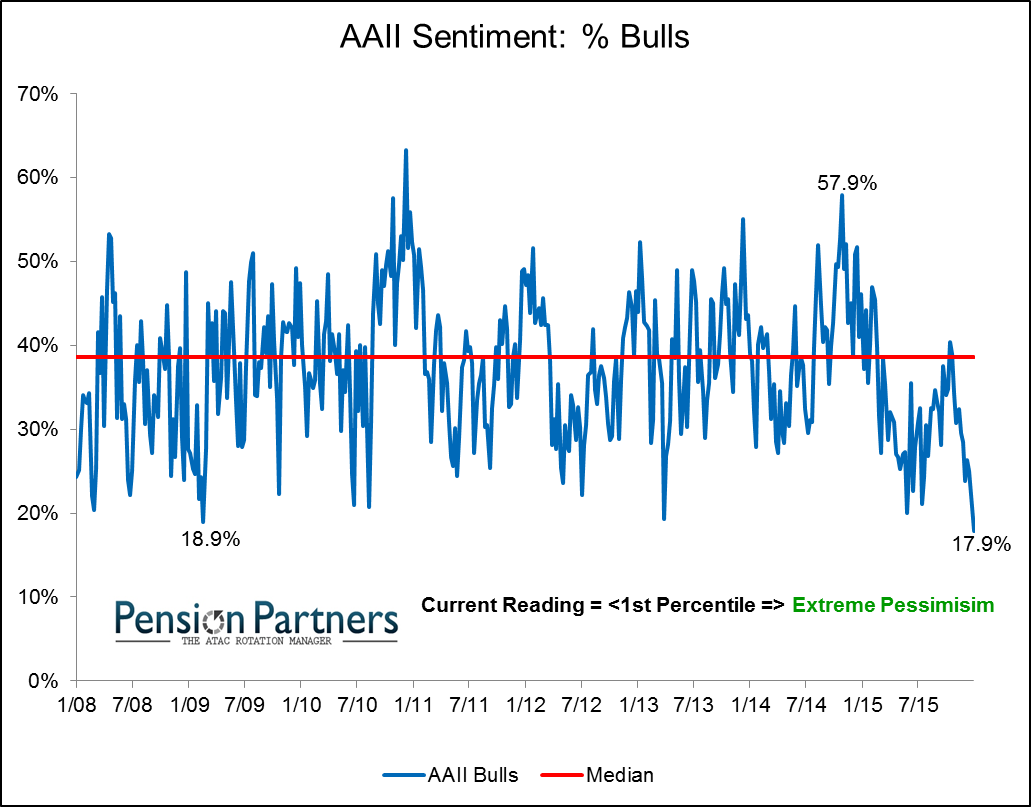 At least, 1867-August 24 intra-day low held. Now we wait for Sunday’s data about China. If past events can have any predictive effect, then it should be ok. CNBC has announced special coverage of markets on Monday from 6 am to noon despite a market holiday in the US. And the timing of their specials driven by investor fear are a good contra indicator against fear.

Chinese stock market is looking sickly indeed, to use a Gundlach phrase. It is almost acting as if the growth in China is likely to be closer to zero% instead of the proclaimed 7%. If it is actually comes in that weak, then global growth is likely to be 1.9%, he said.

By now, everybody knows that the Yuan is going to be devalued. Why would anyone wait around to convert to US Dollars at a lower price? This is why, according to RBS, the Yuan needs to be devalued by 20% quickly to stem the outflows.

So their advice is Sell everything before China devalues. Why? Because, in the words of Albert Edwards of SocGen, we will see a “full blown trade war in the offing not unlike that in the 1930s“. And what would that do to the S&P 500?

On that cheerful note, we will turn our focus to the divisional games this weekend.