This was some week. Not in the US indices but in previously beaten down stocks, sectors & markets. If a three-hour questioning during a police detention can produce a 22% rally in a week like Brazil delivered this week, could our police please find someone to detail or question? We would volunteer either President Bush, President Clinton or both if that would make S&P rally by 22% next week. At the stock level, what about Freeport McMoran? That stock was up 41% this week on Friday morning but closed only up 31%. The action was so relentless that it felt as if some fund was being stampeded out of existence.

And last but not the least , the sector. The one that demonstrated that journalism remains the best contrary indicator ever: 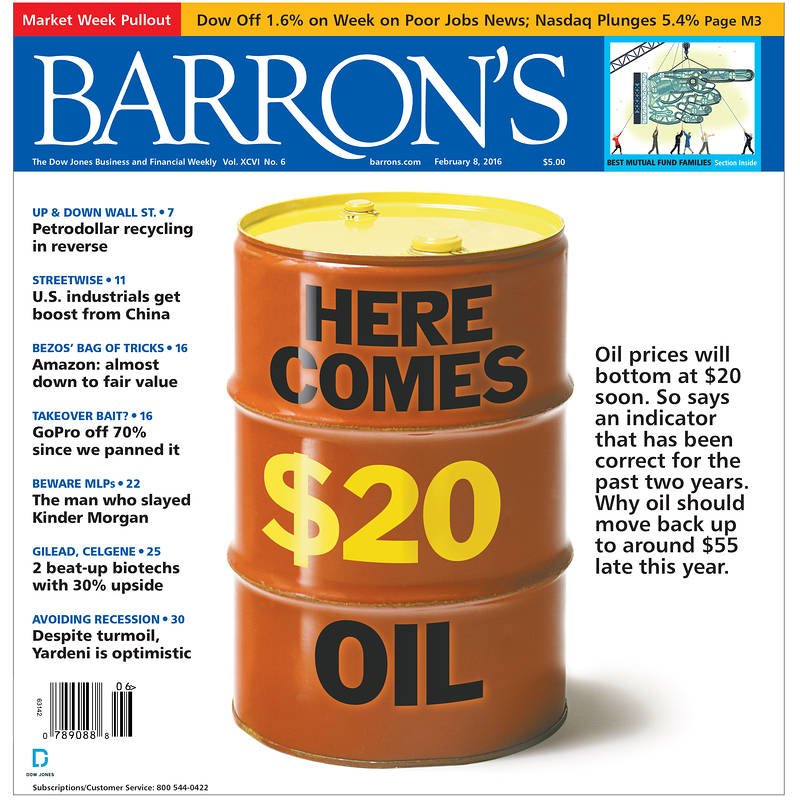 USO & BNO both closed up 10% this week with OIH, the Oil Services ETF, up 13%. The Broad indices didn’t do so badly either.

If you were long the Russell 2000, you would call the chart below as beautiful: 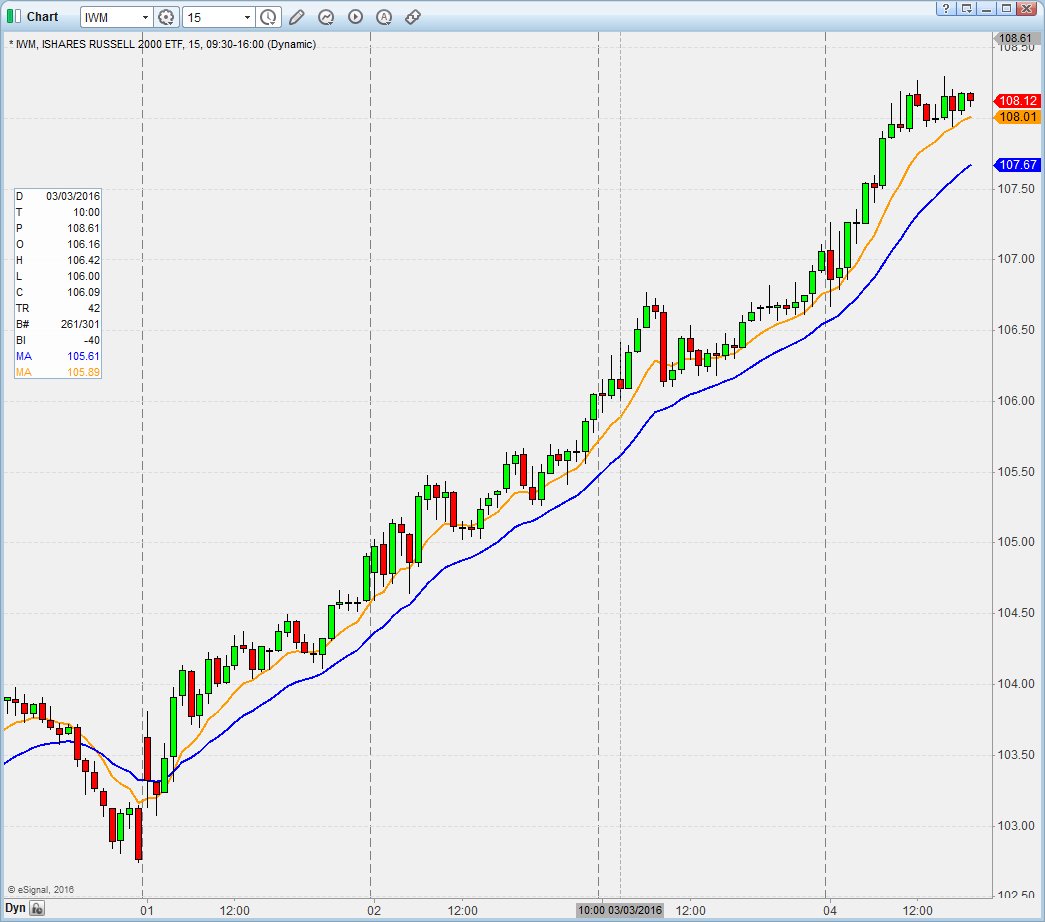 So what now? We will get to that in via detours.

You have to feel for Chair Yellen. Three weeks ago, the next Fed hike was going to be in 2018. Last week it was priced in for December 2016. Now in September 2016? And look at the speed of the change in the graph below. How can a deliberate body like the FOMC keep up with this? 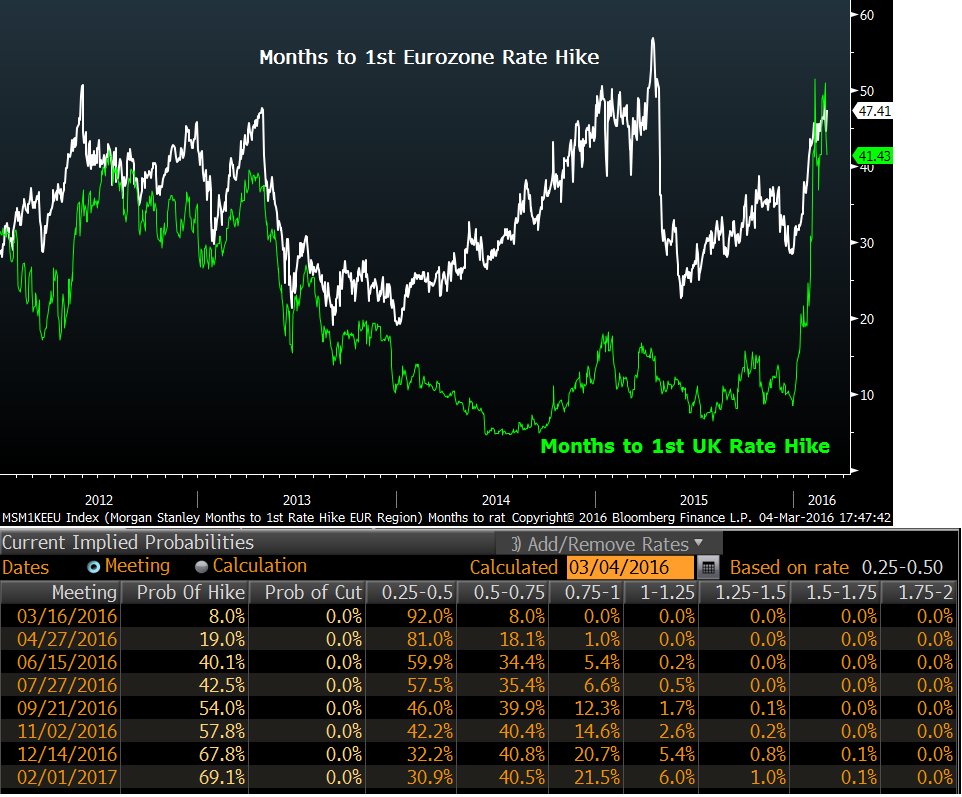 On the other hand, are they deft enough to take advantage of this opportunity and raise by another 25 bps in March? What would you call it if they did so?

This fear may have led to the sharp reversal in Gold & resource stocks on Friday afternoon. If a March hike fear is enough to cause a reversal, what would the forecast of 3.61% Federal Funds rate do? 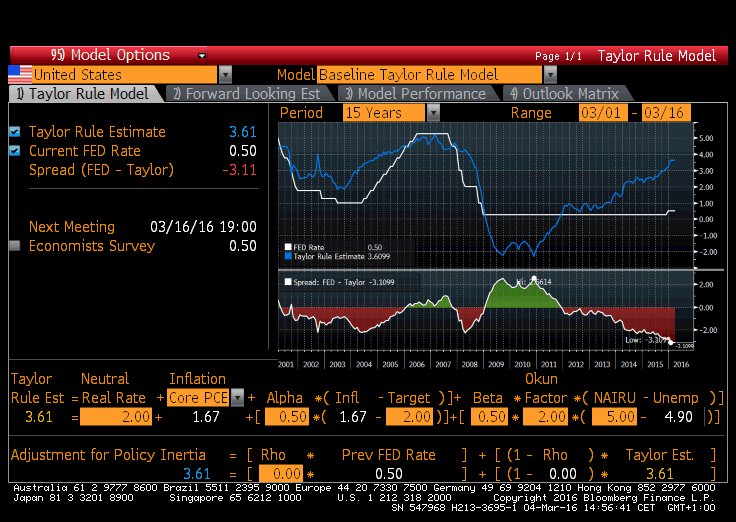 The 3.61% estimate, if realized. would not only invert the 10-FF yr curve but the 30-FF curve as well. And it would guarantee that the 100% recession prediction of Jim Rogers comes true.

On the other hand, David Rosenberg sees inflation right around the corner: 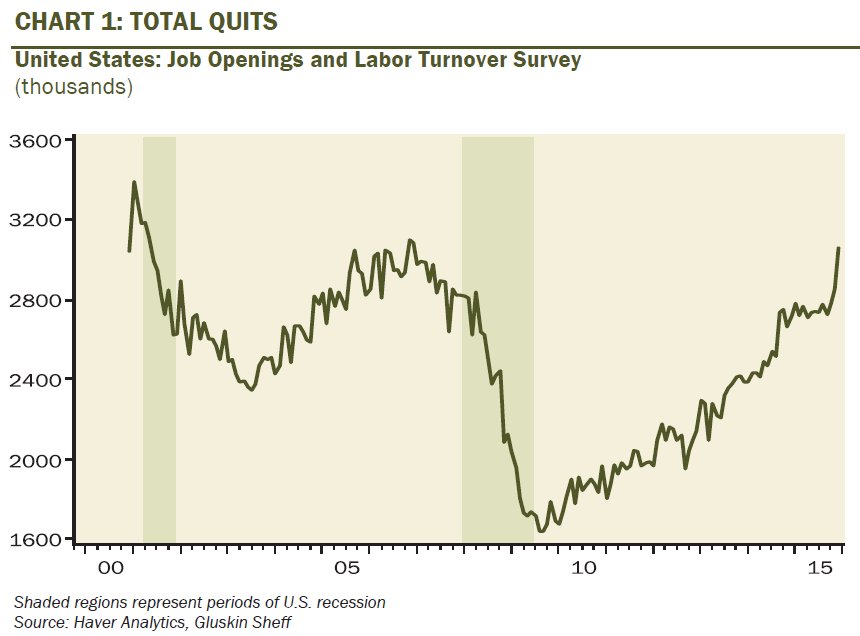 This fits in with the sharp rise in yields along the belly of the curve & the bear steepening of this week with 5-year yield up 14 bps. And it fits in the huge inflows in High Yield bond funds this week. Parets wrote “not only do we not want to be short high yield anymore, but we want to be aggressive buyers as long as we’re above the February lows“.

A more negative message comes from a different & interesting angle – the link between margin debt and C&I loans:

But what does this have to do with C&I loans?

A week like this one is not necessarily a sell signal at least not based on history:

What is a near term target? 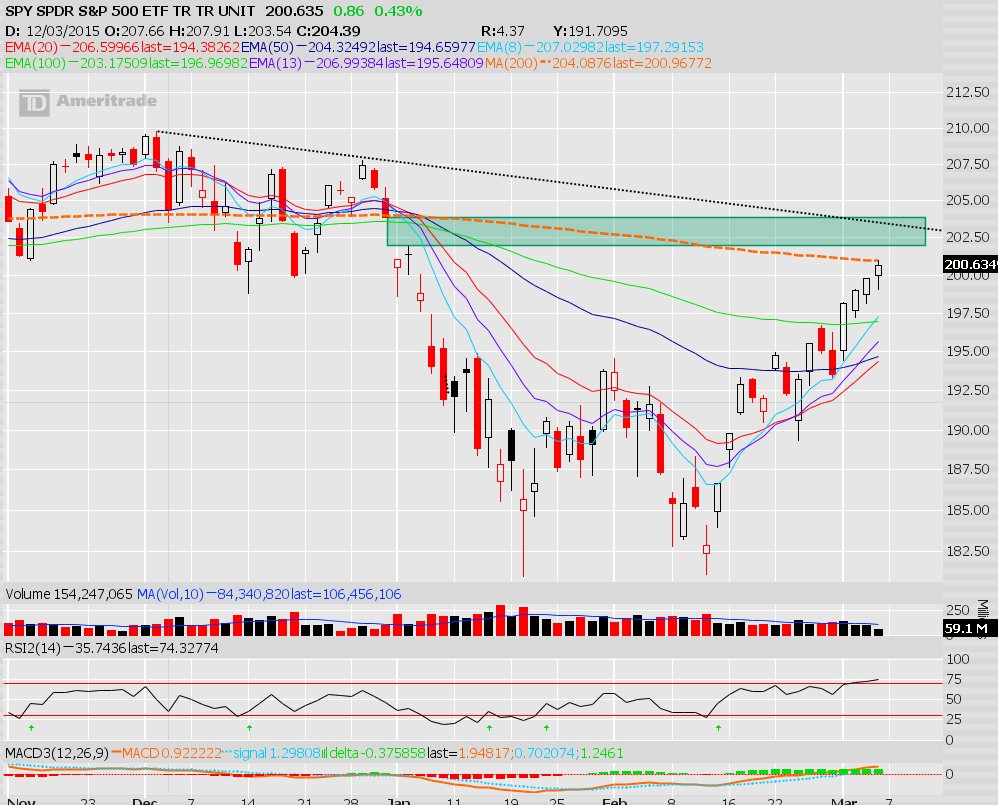 A similar target from:

But there is no question that the S&P  looks way overbought. And how could it not be after a 200-handle rally in 15 trading days or so? But a chart always is better than words:

The High-Low indicator seems to be giving the same message:

This weight of evidence seems to have brought two warring traders of CNBC – Grasso & Siebert – into agreement on Friday with the usually bullish Siebert as direct as we have heard him – “fade this rally beginning Tuesday-Wednesday; walk away from equities right now“.

But what about looking at the market from different angles? On the other hand, a couple of gurus came on FinTV with S&P targets of 2300 by year-end. But we are not sure any of them called the downturn in January & February. One who did warn of the downside and now says a rally to new highs is possible is Carolyn Boroden, a colleague of Jim Cramer at RealMoney.com. Her reasoning is explained in detail by Jim Cramer in his article S&P could be headed for new highs.

Larry McDonald thinks the big rally in copper is a bear market rally:

This brings us to the best asset class of 2016

The action on Friday was something. As soon as the NFP number hit, GLD sold off very fast. Then it recovered, went to highs of the day and fell hard. The action in NEM was more intense. It rallied 7% from Thursday’s close just before 10:00 and then began falling. By the close it was down 6.6% from the morning high and down 2.7% from Thursday’s close.

Gold has been on a near vertical rise for the past 3-4 weeks with matching inflows:

That could be a sign of a top wrote Tom McClellan in his article Gold Preps For New Trending Move. 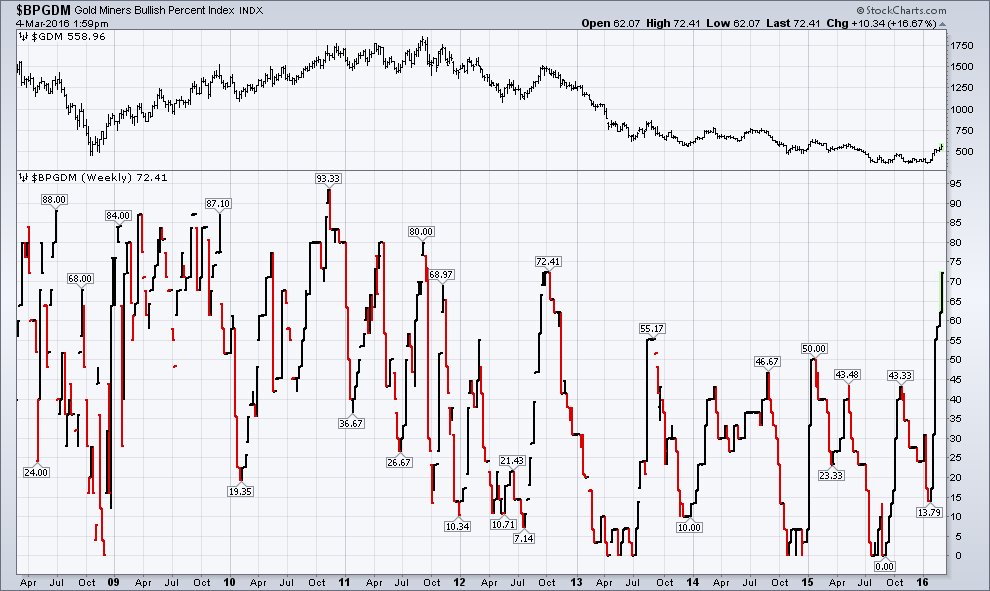 State Street might keep issuing more shares to keep the price of GLD close to its NAV. But BlackRock announced on Friday that they would stop issuing more shares of IAU, their ETF. This apparently is due an exhaustion of IAU shares currently registered. This is not a big deal in itself because registration of new shares is a documentary procedure. But this does goes to show how extended the demand of Gold has been. And that, as Tom McClellan says, could be a sign of a looming top.

All the above sounds highly reasonable and might well prove so. On the other hand, Draghi could surprise next Thursday and Gold could find a new stage of explosion.

Tom DeMark had talked about a 40% rally in his call in mid-February. Oil has already rallied by 38% from $26 to $36. So is Oil about to turn down like Gold? Wouldn’t it be interesting if it does just as the fundamentals have improved? 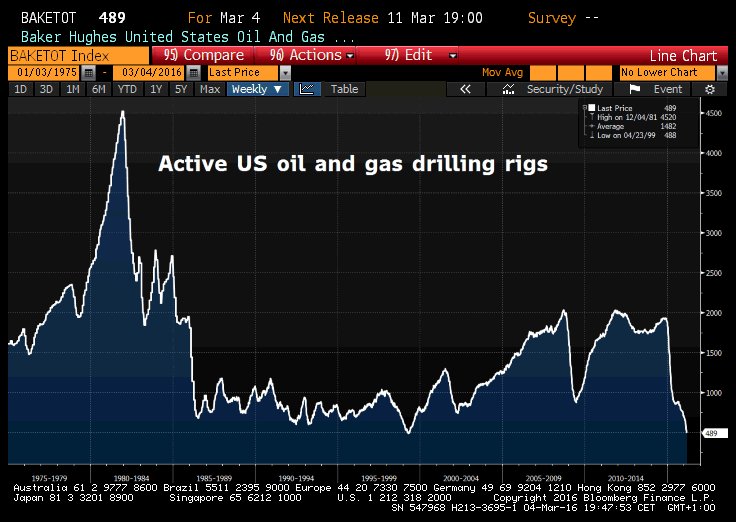 What we do know is that the positioning in every asset class is plain nuts and it represents, as Larry McDonald called it, a dynamite shed. And you have the world’s central banks going along blithely in their pursuit of whatever it is that they are pursuing. If they accidentally set off one little piece of dynamite? Frankly, we wish they would and create a glorious explosion that would cleanse us all.

Actually, dynamite explosions can be fun if you are the one throwing the stick or shooting at it.