We have been travelling for the past few days and missed most of this week’s action except the release of the Fed minutes & Wednesday’s post-minutes reaction in markets. The action in Treasury yields was dramatic as we see from the chart below from Bear Traps Report.

With respect, they picked the wrong maturity. The hardest hit was the 5-year Treasury as you would expect on surprisingly hawkish minutes. We don’t want to revisit our old suspicion about these released Fed minutes being different than what might have transpired during the actual FOMC meeting weeks ago. But there is no doubt that these “hawkish” minutes were designed to create a real expectation of a potential rate hike during the June FOMC meeting.

The hysterical reaction in the markets was captured by CNBC’s Michelle Caruso Cabrera who harshly demanded to know how BlackRock’s Rick Rieder was going to change his investing tactics in response to the minutes. We wondered whether Ms. Caruso-Cabrera had bothered to consult CNBC’s proprietary Kenosha database to check what happens in the few days after an explosion in Fed hike fears like the one on Wednesday afternoon. Had she done so, she might have discovered that such spikes tend to fade, at least in the post 2013 environment.

Our own view is simple – We think the Fed is eager to get their 2nd rate hike on the books and they will tighten when Brexit fears prove groundless, when Chinese growth & currency stabilizes, when European growth trends up, when U.S. Dollar becomes weaker, when the S&P 500 looks stable, when the U.S. economic data becomes demonstrably stronger and when the Fed Funds market prices in the rate hike. When these conditions are met, they will be fast & resolute in their rate hike of 25 bps.

Until then, these rate hike fears are what we have seen ahead of previous FOMC meetings. True to form, Rick Santelli refused to get on the fear bandwagon. Read what Santelli said on Thursday afternoon in response to the “hawkish” comments of NY Fed President Dudley:

A friendly suggestion to Ms. Caruso-Cabrera – speak to Rick Santelli before you get emotional about interest rates. David Rosenberg gave a similar counsel to his readers on Friday:

But what about Rick Rieder who was in the line of fire from Ms. Caruso-Cabrera? Read what Rieder said on BTV on Thursday:

So what about a rate hike in June? Rieder said to BTV – “July is more logical“. But what about forward payroll growth slowing significantly? CNBC’s Steve Liesman reported that, according to Eric Rosengren of the Boston Fed, “normal or “trend” payroll employment growth is now between 80,000 to 100,000 jobs a month“. And even Yellen thinks 100,000 jobs a month is strong enough, per Steve Liesman.

Are they nuts or are they getting desperate? The latter is more consistent with the email comment from Jeffrey Gundlach to BTV:

The only reason Yellen-Dudley may be so desperate is that they are petrified of a slowdown and want to get to 50 bps now so that they can cut by 50 bps later to ease in case a slowdown does happen. This seems so utterly nuts to us. If a cut of 50 bps can prevent a slowdown later, then wouldn’t a hike of 50 bps actually create a slowdown first? But we are simpletons & don’t understand the mindset of central bankers. After all, they still think they have “credibility” & must do what it takes to protect that “credibility”. Shouldn’t they read the parable of the emperor & clothes? What Chair Yellen says next Friday will be interesting, won’t it?

Some like Carter Worth of CNBC Options Action suggest fading this Fedspeak heat & buying bonds or TLT. But that only works if long maturity rates fall. In contrast, closed-end safer-credit funds that are leveraged may provide a double bounce if long rates fall & Fed hike fears fade. Look at the steep fall in muni closed end funds on Wednesday & Thursday:

But where does the S&P go from here? Some like Tom Lee say up 12% from here by year-end. Some like Ari Wald of Oppenheimer wonder whether the action represents the early stages of a bad bear market or the later stages of a cyclical correction. The best way to understand Wald’s bullish thesis is to see his charts & listen to his explanation:

Wald does warn of a possible decline in S&P to 1996 but then sees a rally because of an inverse head & shoulders formation. His case is also based on a rally in High Yield. It is sort of easy to see why a decline, especially a pre-FOMC decline, may reverse viciously if the Fed doesn’t hike in June and if fear of “Brexit” is replaced by the joy of “Brexremain”. Such a vicious rally could even possibly lead to new highs in July. But that might reawaken fears of a 2007-2008 type of a top: Such a fall in High Yield would need a slowdown in the global economy, wouldn’t it?

Is it only copper? 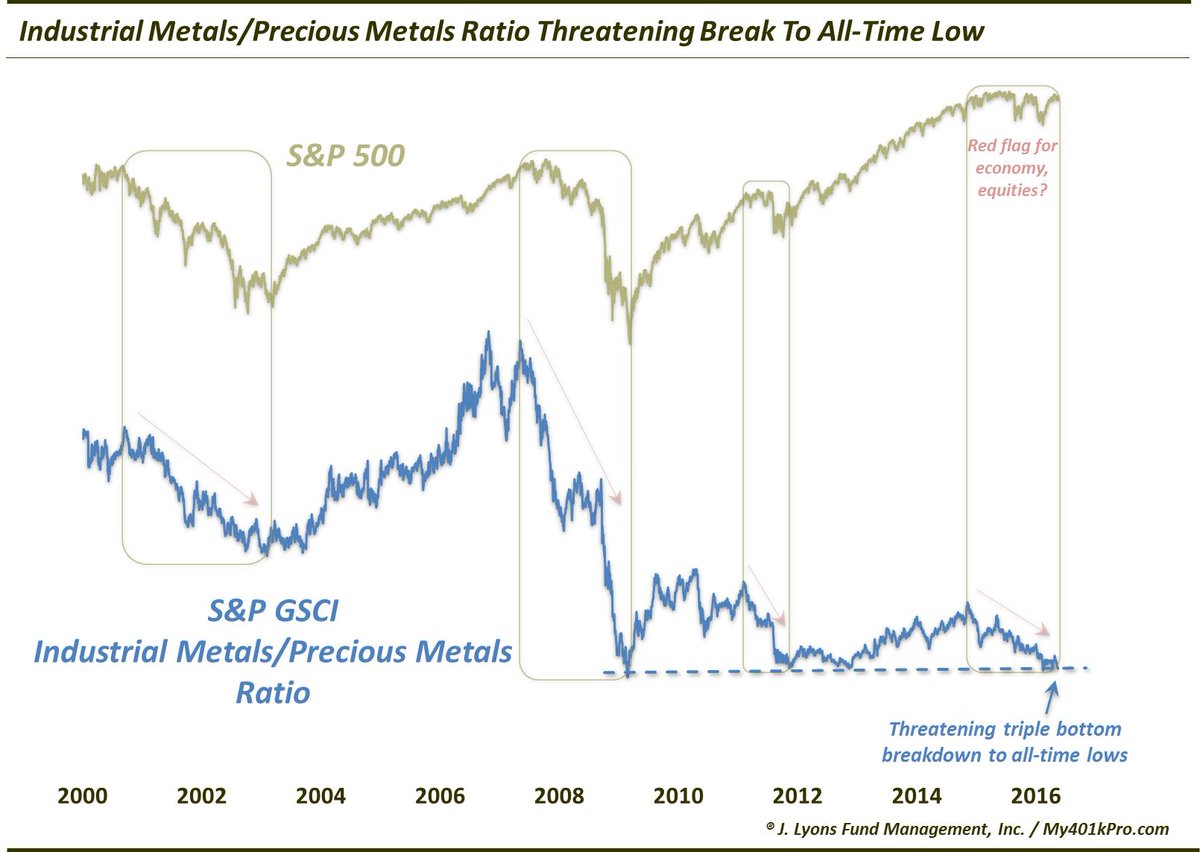 Frankly, Chair Yellen knows & sees all this. So we find it hard to believe that she is gung ho to raise rates on the basis of a “new normal” of 100,000 jobs added per month. Unless she is also drinking the cool-aid of it is ok to slow down the economy by now hiking rates in order to have the ammunition to reverse the slowdown by easing by 50 bps later. Or unless her only thought is to maintain the institutional credibility of the Fed against charges of not having the woman-hood (with total credit to Larry Kudlow for this expression) of raising rates.

But seriously can we have any such massive problem without an accident in China? And hasn’t China stabilized? Those who think so should run to Beware of the Banker article  on The Bear Traps Report Blog. Two quick excerpts:

(chart from Beware of the Banker – Bear Traps Report)

Remember how such a problem was “resolved” in February? By the Fed shooting down the U.S. Dollar & taking the pressure off of China. We already have seen a 4-week rally in the Dollar. Will Chair Yellen catapult the Dollar into a new orbit by tightening in June? Not unless there is some other agenda is involved.

What’s the first thought that comes to mind when words like credibility of the Fed & Chinese devaluation are used? Gold. The recent Dollar rally has already taken out some froth out of Gold & silver and a lot of froth out of Gold miners. As usual, Silver looks much uglier than Gold.

But what about the longer term for Gold? Tom McClellan answers that in his article Major Cycle Low Upcoming in Gold. His bottom line?