The chart below does justice to the dictum that a picture is worth a thousand words. It shows very simply why Bernie Sanders & Donald Trump have received humongous support. 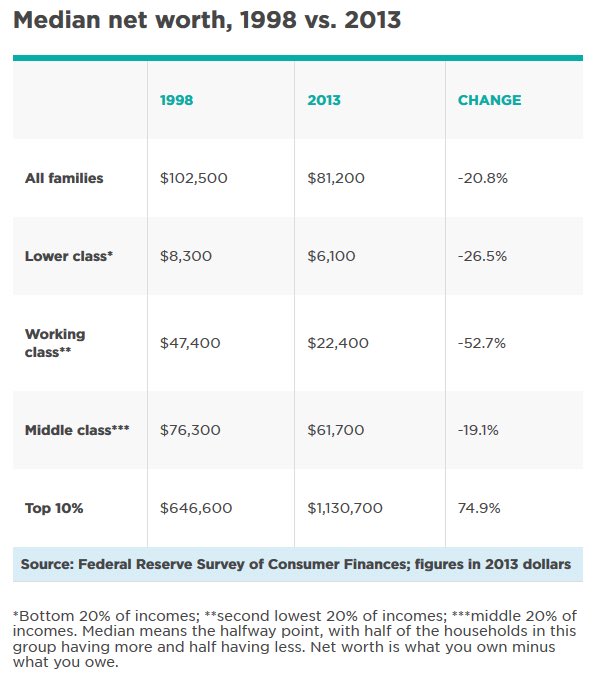 Note this goes back to the last two years of the Bill Clinton presidency. So the bottom 90% of the American people have been economically damaged under three past Presidents, two Democrats & one Republican. These past 18 years have been a story about “crony capitalism, pay-to-play politics, special interests, … policy inertia” in the words of David “Rosie” Rosenberg, a famed economist who was a timely voice against the bubble of 2007-2008.

Rosenberg is the economist who coined the phrase “If Uncle Sam was a stock, you would want to buy it” that we used as title for our article on July 3, 2015. Recently, he spoke about the urgent need for fiscal expansion and the election at the 2016 Strategic Investment Conference of Mauldin Economics:

That was fine. After all, Rosenberg, previously Chief Economist at Merrill Lynch, is no profligate activist. He is as rigorous as they come. That is why his next comments stunned us:

We have written about why we think Trump’s foreign policy views are exactly what America needs. After the utter mess of the past 18 years, we need a smart America first foreign policy. That is not what Hillary Clinton will deliver. She is a throwback to the first term of Bush & Obama-Clinton, a woman who may actually be more Cheney than Dick Cheney himself. So it was surprising to hear what Dr. Phillipa Malmgren, an adviser to President Bush, said at the 2016 Strategic Investment Conference of Mauldin Economics.

Dr. Malmgren is correct both about Hillary being riskier than Trump & about the mischaracterization by the popular media. Trump was treated with kid gloves by CNN & MSNBC during the Republican primaries because he brought ratings and because he was riding a wave of popularity. That is why his strategy of getting free supportive media succeeded brilliantly.

It is completely different now. First ratings are now dependent not on Trump alone but on a Trump vs. Hillary confrontation. So Trump will not get a solitary pass to media coverage. Secondly Trump is not a novelty anymore. More importantly Trump is now swimming upstream against the viewership of CNN. MSNBC, ABC that is mainly democratic. Add to that the ingrained yet obvious bias for Hillary & Democrats among CNN, MSNBC anchors.

To win, Trump has to play smart & act like the salesman he was in winning his real estate deals. Instead, Trump chose to lash out against journalists in that press conference for donations to veterans. That is not Reaganesque but actually anti-Reagan.

Many, including Jim Baker, have seen a parallel between Reagan’s 1980 campaign & Trump’s 2016 campaign. That is Trump’s strength. But his glaring weakness is the ease with which he could be characterized as anti-Reagan. Reagan was a charmer as well as a thunderer against the evil empire & Iran. We have seen Trump the thunderer. But we have not yet seen the charm of Trump that many, including Mort Zuckerman, credit for his real estate success.

That does not mean Trump has to tone down his public campaign speeches but he also has to exude charm & humor in dealing with contentious issues. And especially when attacked brutally by the media in his press conferences. Reagan was treated with greater contempt & scorn than Trump is right now. But Reagan made his attackers look foolish. That balance of toughness, fighting spirit and public humor is what changed people’s perception of Reagan.

And Reagan’s messages were simple as Trump’s have been. That is why Trump should have focused his press conference about Veterans on a simple message – I raised $6 million for Veterans, how much money did Hillary raise for Veterans? And ask the journalists why aren’t you asking this simple question to Hillary? Don’t you know all the money Hillary raises goes to her own benefit? Don’t you care about that? Twitter & Instagram are great venues to show the true colors of journalists, not by calling them names on Evening News.

5. Did Trump miss a golden opportunity?

Look at the golden opportunity Hillary gave the Trump campaign yesterday. Democratic supporters viciously attacked supporters of Trump and burned American flags. And Hillary Clinton blamed the “environment” Trump had created for the rage of her supporters. We heard that and instantly Benghazi came to mind. Remember how Hillary also justified that attack on American consulate as caused by an anti-Muslim video on You Tube. What an opportunity? (the “environment” did this?)

What an opportunity for a video ad with a simple message that whenever Americans are attacked by thugs, Hillary sides with the thugs & justifies their actions – show the video of the woman being pelted by eggs & abused, of the man being beaten by the thugs; show the American flag being burned; then swing to US embassy being burned & attacked, show the 4 Americans that were killed & keep the message through the video – “when Americans are attacked by thugs, Hillary comes out for the thugs“. That makes Benghazi relevant to the ordinary Americans, those who have no idea what Benghazi is. The basic message that Hillary is for those who attack Americans & not for America is true & backed up by her own words. The clip of Hillary asking angrily “what difference does it make?” can be devastating when combined with videos of Americans being attacked by her supporters & by Arab thugs.

And this is a message that can be carried through out the entire Obama-Clinton foreign policy and trade policy. The foreign policy comments of Obama & Clinton are rich in material that can portray them as always against the interests of American people & for the third world.

That links up easily with the donations made by third world countries to the Clinton Foundation. Just link Hillary’s support of Muslims in the world to donations made by Muslim countries to Clintons. Show that countries that have supported jihadi fighters in Syria & Libya have also donated to Clintons. Link that to 1990 allegations that Clintons raised money by renting out the Lincoln Bedroom at the White House during the Clinton presidency. That can be used to insinuate that Clintons have always made money for themselves by selling out the American people & American assets. Link that to Clinton’s trade policy that enriched Mexico & other third world countries at the expense of American people.

Link this to Hillary’s foreign policy speech by focusing on her use of “allies”? Ask who are the allies that Hillary refers to? Does any country that donates to Clintons become an ally of Clinton’s America? Is Algeria an “ally” of America? Since when?

Trump’s problem is that so much of Hillary’s past is known & priced in. That is why crooked Hillary has not worked like “Lyin’ Ted” or “low-energy Jeb”. They were new & real characterizations that stuck. We are not smart enough to come up with such labels but “what does it matter Hillary” or “third world Hillary” can be used effectively to characterize Hillary as for them instead of the American people. These are labels that can be used to show the entire Clinton period from NAFTA for Mexico to Hillary putting coal miners out of business; from Benghazi to San Jose of this week; to show how Clintons went from being nearly bankrupt in 1998 to worth $200 million in 2016 by getting money from third world countries.

And that links the chart used above. It shows the decline of 90% of American people from 1998, the year of Monica Lewinsky, the year Clintons went nearly bankrupt. Since then the rest of the world, especially the third world, began getting richer while Americans began getting poorer. That has been the story of the past 18 years. Isn’t it time to change that? Is that a simple message that will resonate?

Chris Mathews of MSNBC is brazenly partisan. But his main passion is political campaigns. He understands how Democrats think, meaning what may appeal to them. The Trump campaign should listen to him. Months ago  he suggested that Trump make a video ad about the buildings & luxury properties he has built around the world. That, Chris said, is real, a real accomplishment that people can understand & relate to.

This is smart because it tells a positive story about Trump and also demolishes the “temperament” issue. Voters knows that they have to be persuasive & charming when buying their home; they have to work with a lot of people to make that happen. So how persuasive & charming must Trump be to build in all these cities & countries? How good must he be in working with different types of people? How smart must Trump’s temperament be? Charming in nature but a tough aggressive fighter when necessary.

Chris Mathews will not suggest this but the Trump campaign should ask the question how did Clintons amass a fortune of $200 million? They didn’t start a company like Apple, they didn’t run a business. They generated a wealth of $200 million seemingly like magic. Trump’s buildings show how he made money. Shouldn’t the American people be told how Clintons made 200 million? Was it by selling out American people & America’s foreign policy to the third world? How much money did the Clintons make in the four years Hillary was Secretary of State? May be nothing but don’t we need to see year-by-year figures of wealth generation by the Clintons?

The Trump campaign seems like those teams right now, winner in their conference but outclassed against the other conference’s winner. The Hillary campaign is deeper in talent & resources than the Trump campaign. They have a weaker quarterback in Hillary but the rest of the team is tougher. In contrast, the Trump campaign is a one-man show in which Trump has to do everything from laying out his message to attacking Hillary to handling the press to fund raising and so on.

That is not an insurmountable problem. Tom Brady has won four Super Bowls with a non-deep Patriots team. More relevantly, Bill Clinton won in 1992 with scant resources and a weaker organization despite a media storm of scandals. Both Brady & Clinton focused on their game plan & on their strategy.

Trump needs to do precisely that. He has to stay laser focused on his message of fighting for the American people, for American jobs that have been sold out to the rest of the world by Clintons & Obama. He has to stay committed as the champion of American workers against third world enriched Hillary. If he doesn’t, he will get Romnified before the Republican Convention.

And he has to create an attack machine staffed by a new George Stephanopoulos & others who can respond fast & furious while staying on message of Hillary being for them rather than for Americans. Look what Lee Atwater achieved with just one symbolic bad guy in 1988 against Michael Dukakis. How much material would a new Stephanopoulos or a new Atwater have to go at Hillary? They would drool at the possibilities just as Chris Mathews does on his show, despite being partisan for Hillary. Chris just can’t stop imagining the possibilities.

And that is the message. When Chris Mathews starts feeling sorry for a Republican campaign, it is time to wake up, refocus, & attack.