Back in March 2014, Nobel Laureate Robert Shiller introduced his concept of “Tale Risk”, a smart & cute modification of the statistical/investing term “tail risk”. The term was created by Shiller to describe how a powerful tale or narrative, often about a new leader, can change the confidence of a nation & result in great upside. Shiller was speaking about Abe of Japan in his article when he wrote:

A week later on March 29, 2014, we applied this “Tale Risk” term to the Narendra Modi, the candidate for leadership of India. Shri Modi won his election with a massive mandate in June 2014 and look what has happened to India & Indian stock market during the past 31 months.

Tale Risk is the perfect way to describe what the stunning & historic victory of Donald Trump can do to American confidence.  Bill Ackman said he woke up Wednesday morning “bullish about America“. Ackman added “He [Donald Trump] is going to get a lot done & nothing has been done in USA for a very long time.” The day before Stanley Druckenmiller said he had sold all his gold, shorted bonds, gilts, bunds et all and gone long growth. Druckenmiller said “this economy is so over-regulated & people are just drowning in red tape, that the removal of that & … serious corporate tax reform … I am very optimistic on the economy“. Druckenmiller spoke about a 4-handle on GDP growth rate in 2017. Jeffrey Gundlach went a handle higher on Friday and “nominal GDP could be 5%” sometime next year.

All this while the votes in Michigan are still being counted and before any clue about the team of President elect Trump! This, folks, is pure “Tale Risk”. As we have seen in the case of Modi & India, such “Tale Risk” can create a sustainable & powerful change in asset classes & markets. Allow us to speculate about some changes we might see.

We mean the trillions that have been kept away from America by corporations. Donald Trump has virtually promised to get all the parties & players together to bring home these trillions for investment in America. Druckenmiller spoke of “a blended rate of under 10% to repatriate capital“. That would be just great for the US Dollar. Rick Santelli concurred and said “there are no triple tops & if DXY breaks 100, we will see 101, 102 ... US is definitely a magnet now“.

If Donald Trump can get repatriation done & capital rushes to America, what happens to areas of the world that have been living off of capital inflows? EEM fell by 3.8% this week during the best week for US equities in years, a weekly underperformance of 7.6% vs the S&P.  Brazil & Mexico ETFs fell by 8% & 12% resp. It could get a lot worse for EM assets: 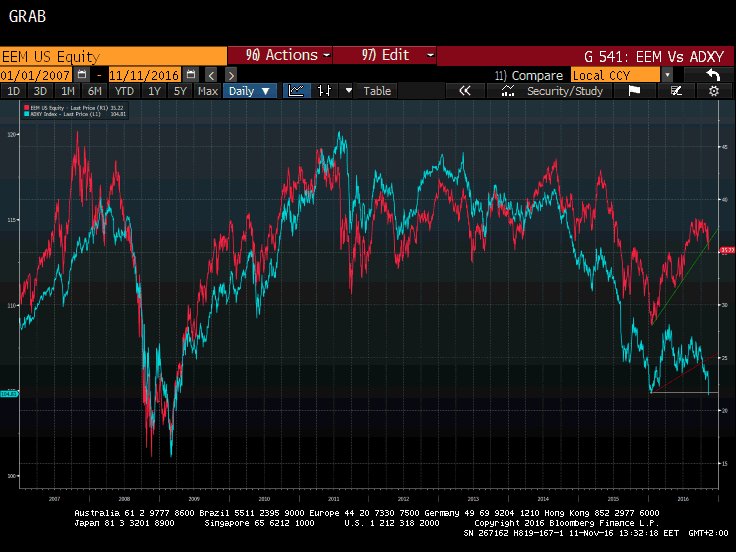 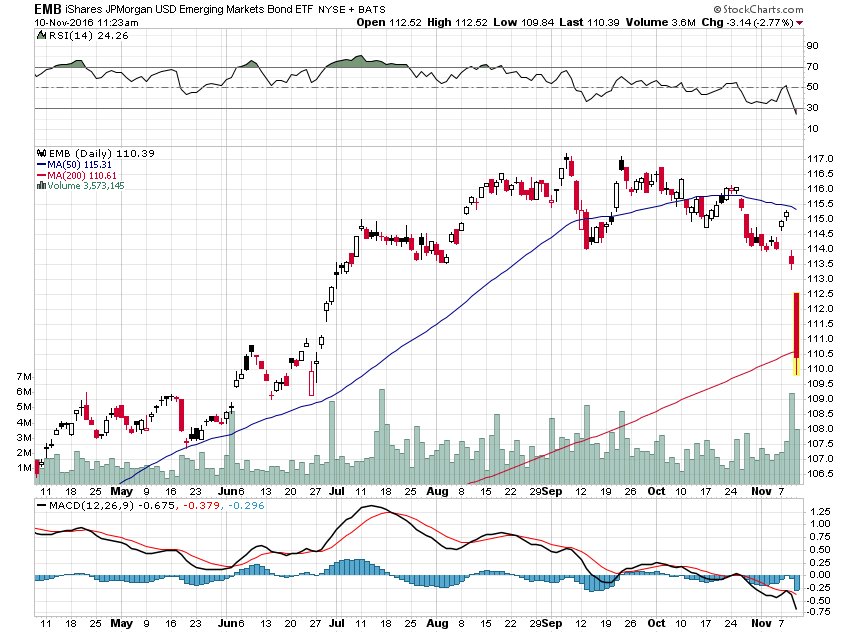 The outperformance is not merely over EM. 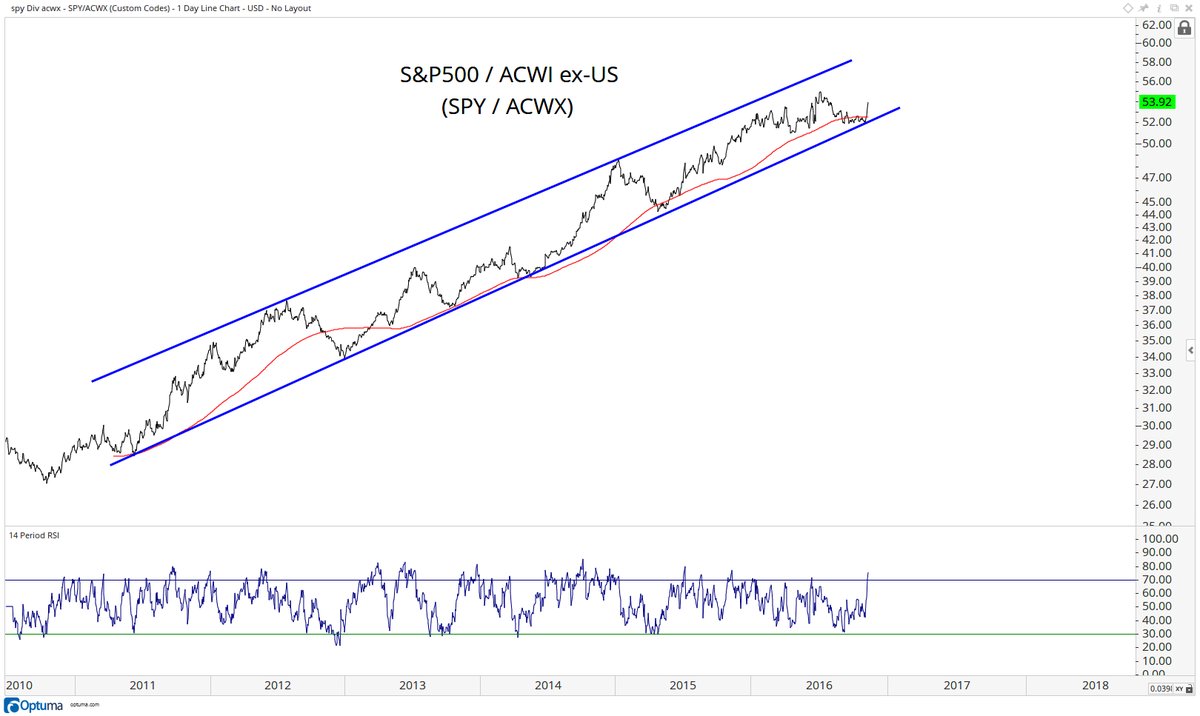 Gundlach said he favors industrials, materials & financials over financial engineering stocks, FANGs etc over the intermediate term. Another way of saying this is from J.C.Parets: 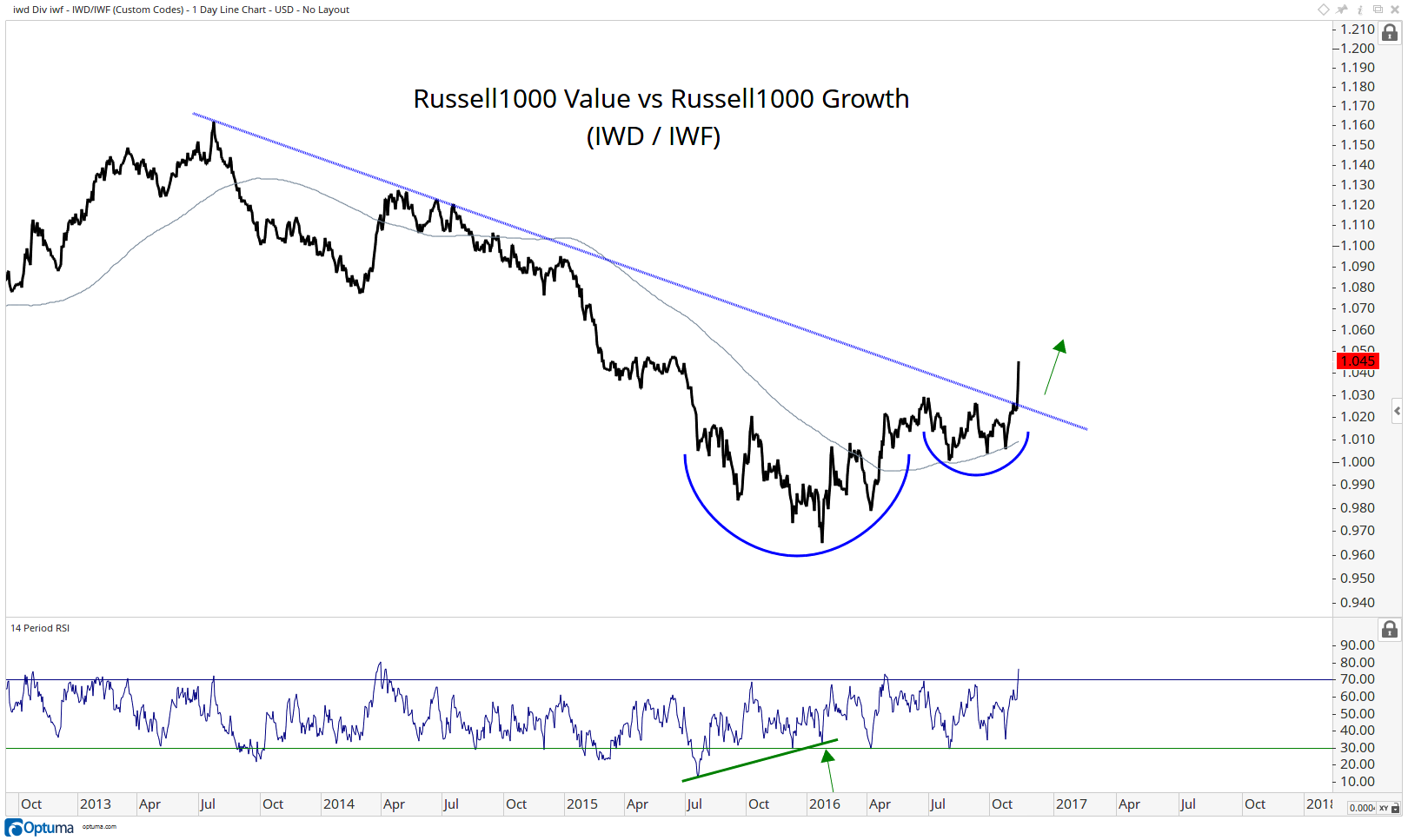 What about Treasuries? The 10-year yield tracks nominal GDP fairly closely. So what happens to the 10-year yield if nominal GDP reaches 5% as Gundlach suggests? Should it surprise anybody that TLT had its worst weekly loss ever, meaning since its inception in 2002? TLT was down 9.3% this week with the 30-year & 10-year yields up 39 & 37 bps on the week.  This folks is called Tale Risk.

But even Brazil & Mexican ETFs didn’t get hit as hard as GDX & GDXJ, Gold Miner ETFs, that were down 17.7% on the week. Gold & Silver were down 6%. In contrast,

3. Respite or a pause that refreshes?

The US economy is still leveraged and a fast up move in rates has been self defeating. That may be why Gundlach thinks 85% of the up move in yields may be behind us. He is looking for a tradable rally in US bonds unless 2.35% is taken out in the 10-year yield (with 1.8% for 5-year & 1.2% for the 2-year).

In that vein, Chris Kimble of Kimble Charting wrote on Thursday about Copper & 10-year yields touching up against falling resistance:

Guess what happened on Friday to copper?

The Treasury market was closed on Friday. So what happens to Copper & Treasuries on Monday? But what about stocks next week?

What does the guru of trend exhaustion say?

By the way what about the FOMC meeting in December? Gundlach said if they don’t raise rates in December they will never raise rates. He is right. Because of Trump’s Tale Risk, we are formally ending our “0 before 50” stance. In fact, we would like to see a preemptive rate rise before the next FOMC meeting, perhaps before Chair Yellen’s testimony on November 17. It would be a thanksgiving gift and it would take away the risk of a weak NFP report in December impacting the Dec FOMC meeting. The election has given the Fed a great gift, a way out of the trap in which they had caught themselves. We hope they have the courage to take it.