Yes, we did describe the meeting at the White House between President Trump & Prime Minister Modi as Better Than Expected and Strategic, but isn’t it hyperbole to compare a nascent America-India relationship with the enduring & deep relationship between America & Israel? Perhaps yes or perhaps No?

Israel is one of America’s deepest relationships and an enormously strategic one. In a critical region that impacts world peace & which sits right in the middle of the Asia-Europe land & sea corridor, Israel is the rock. Allies, even critical allies, have come & gone over the past 70 years, but Israel stands & remains firm for itself & for America. Heck, if Israel didn’t exist, America would have had to build one. The strong US-Israel relationship also rests on shared values; Americans instinctively identify with Israel over every other Middle Eastern country. So how can a budding America-India relationship even hope to compare with the America-Israel relationship?

Yes, India is getting more important to America – fastest growing economy, largest middle class & soon the world’s largest population and all that. But, as Pickering & Trivedi wrote in their Project Syndicate article, these “… have not always proved sufficient to capture the sustained attention of US decision-makers.”

Enter Trump. Nothing matters more in international relations than personal rapport between leaders of nations. As Ian Bremmer, no fan of President Trump, wrote in his Politico article on Friday “A President Hillary Clinton would likely have kept her distance from Narendra Modi and his muscular nationalism, but Trump’s personal chemistry with Modi is evident at every encounter“. And it is not just rapport. As Bremmer added, “Anxiety over China’s continuing rise gives Trump and Modi something very basic in common“.

That is a big deal and Israel-like. Long an Atlantic & Pacific power, America is now seriously focused on the Indian Ocean. The greatest strategic interest of America is control of the world’s oceans to guarantee navigation. That is why the American Navy is the world’s largest & most dominant fleet and will remain so for the intermediate future.

Now that America is virtually self-sufficient in energy and an exporter of natural gas, the Indian ocean is increasingly more critical to America than the Middle East. And the Indian ocean connects the two most important shipping choke points in the world, the Straits of Hormuz that controls maritime traffic from & to the Middle East & and Straits of Malacca that controls the access to the Indian Ocean from Southeast & North Asia. The world’s largest economies China, Japan, & ASEAN (a $3 trillion bloc) depend on these two straits for their economic growth & survival.

A sub-continent size India sits right in the middle of these two straits with the potential to control the entire maritime sphere from the Straits of Hormuz to the Straits of Malacca. This is not theoretical. The British Navy did precisely that from its bases in British-occupied India.

Enter Trump. Read what Pickering (prior US Ambassador to Russia, Israel, India, Jordan, and the United Nations) and Trivedi (stints at the US Commerce Department, State Department, and Senate Foreign Relations Committee) wrote in their article Trump’s Surprisingly Strong Start with India:

We all know the depth of the military engagement between America & Israeli defense forces. What about India & America? Read what Real Admiral Byrne said after the massive Malabar Exercise that just took place in the Indian Ocean between American Navy, Indian Navy & Japanese Navy:

What does a joint US-Indian-Japanese naval task force with 3 aircraft carriers look like? 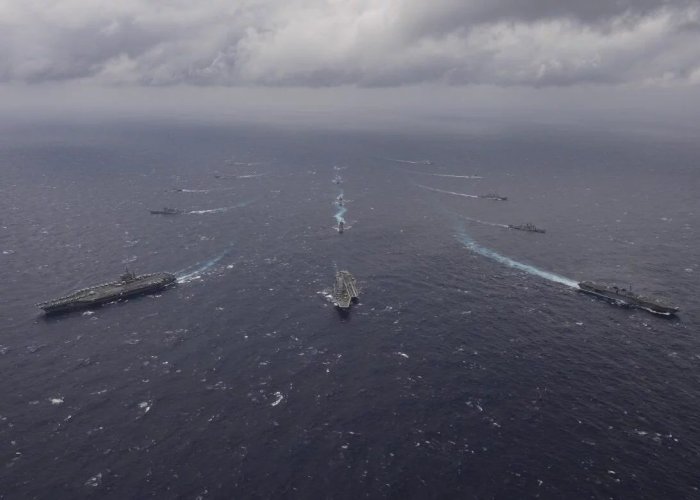 How much of this is Trump-Modi? As Pickering & Trivedi wrote:

How important is President Trump for Prime Minister Modi & India? Ian Bremmer answered it in his politico article:

But there remains a big difference between the treatment of Israelis & Indian, at least from American Think Tanks & American media. While they respect Judaism & Jewish culture (at least in public), these America’s self-proclaimed elite are obvious & public about their contempt for Indian Dharma & Indian Culture. While they welcome the positive synergy coming from Prime Minister Modi, they keep showing their personal contempt by mispronouncing “Modi”. While most of them do it out of ignorance, some TV networks mispronounce “Modi” deliberately & knowingly.

And not just TV networks. Take for example, Alyssa Ayres, Senior Fellow at Council of Foreign Relations for India/Pakistan/SAsia. Ms. Ayers served as Deputy Assistant Secretary for South Asia in the first Obama term. As we recall, Ms. Ayers is fluent in Urdu and so she naturally should be familiar with Hindi. Yet, Ms. Ayres has done nothing to teach her colleagues at CFR how to correctly pronounce Modi ( with a soft d as in Mo-thee). We used to think that is because she doesn’t really care about how names are pronounced. Then we saw her tweet on Friday:

Of course, America-Israel relationship did go thru some of this stuff, like a reference to Jews as “imperfect Christians” from a well known writer. No one does that today, probably because of the massive outrage that created among the Jewish community.

That in itself is a lesson to the Indian community. When they become active in reprimanding American TV anchors & American think tankers about the almost weekly abuses hurled at Indian Dharma & Indian Culture, then India will begin getting respect from America’s “elite”. And the first indicator of that will be when a National US Financial TV network with an Indian managing editor begins using the correct pronunciation of Prime Minister Modi’s last name.

Getting back to Alyssa Ayres, we did ask her in a tweet on Friday:

We are still waiting for a response from Ms. Ayres.