The most watchable foreign trip ever, in our experience. It began with a tongue lashing to Germany & NATO from President Trump, featured a masterly press conference dance between President Trump & Prime Minister May and ended up with England’s native queen Elizabeth getting lost behind President Trump during the honor guard at her palace. We discuss the objectives & ramifications in our adjacent article titled  Thoughts – NATO Visit, EU-UK & Putin on Deck – 1930s & Now.

It suffices to say here that this trip had no impact on US markets at all. What about the status of Brexit? 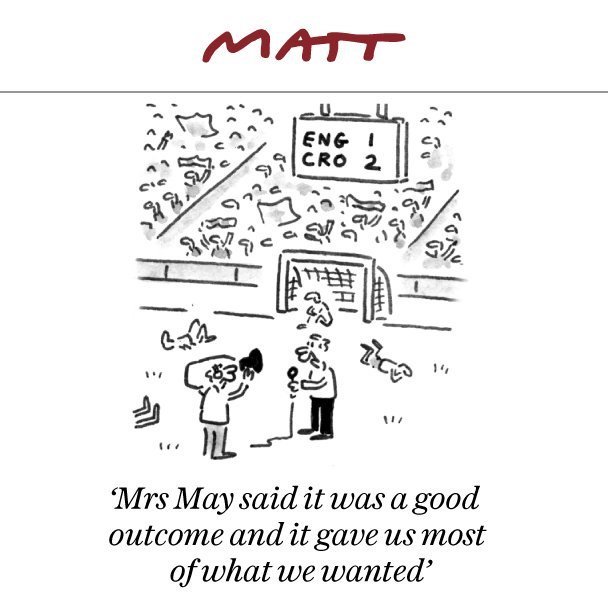 The momentum of last Friday carried into early this week with Dow up 320 points on Monday & up 143 on Tuesday. Then came the news that the Trump Administration had decided to impose 10% tariffs on $200B of Chinese exports. So Wednesday opened hard down & closed down 219 points. Then Thursday opened higher & closed up 224 points wiping out all of Wednesday’s losses. So once again markets fell hard to news of tariffs only to bounce back harder the next day.

Does that mean tariffs are not a real threat to markets? Some think they are and warn about consequences of ignoring the risk of tariffs:

But Lawrence McDonald, via FT, suggests a deeper reason rather than tariffs:

Where does the FT article direct the blame?

Whether it is tariffs or Xi’s China, global growth seems to be showing some slowdown. Will that impact Q3 in US?

Hedgeye seems to concur – “We’re calling for GDP to slow starting in 3Q18“. What about the message of ISM? 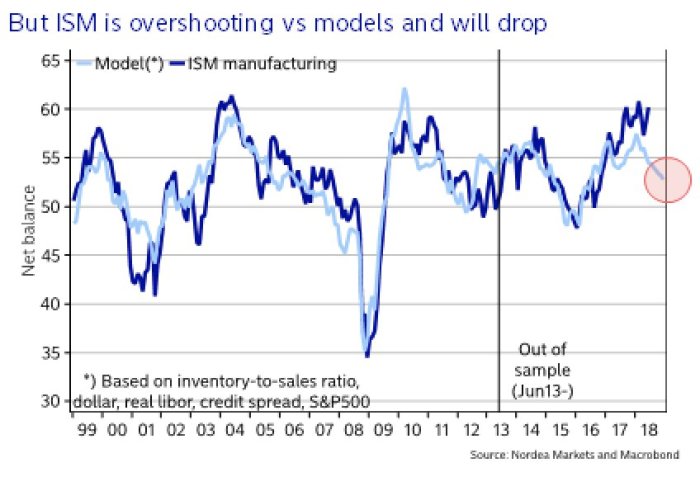 Wouldn’t that impact the Fed’s decisions? Yes, stated Morgan Stanley (courtesy of an old friend, a reader & a financial advisor in Boston) in their report titled  “A Surprisingly Early End to Balance Sheet Normalization“:

Last week, Tim Seymour of CNBC FM predicted the 10-year will get to 2.60%. This week, he made an even more definitive statement:

While we all hear the warnings of eventual curve inversion, no one was brave enough to predict when. Until this week, that is: 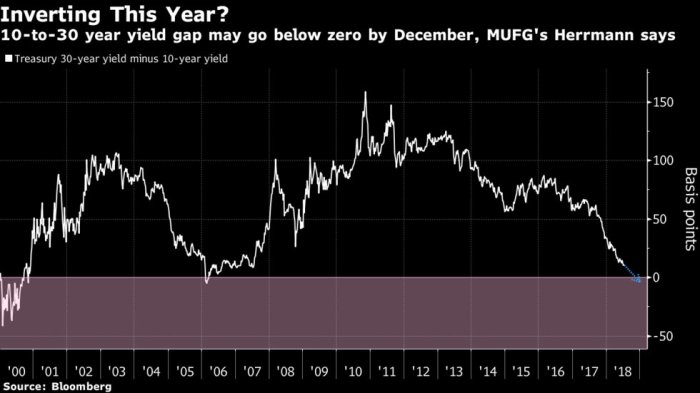 What about the 7-10 year spread, the favorite indicator of Rick Santelli? 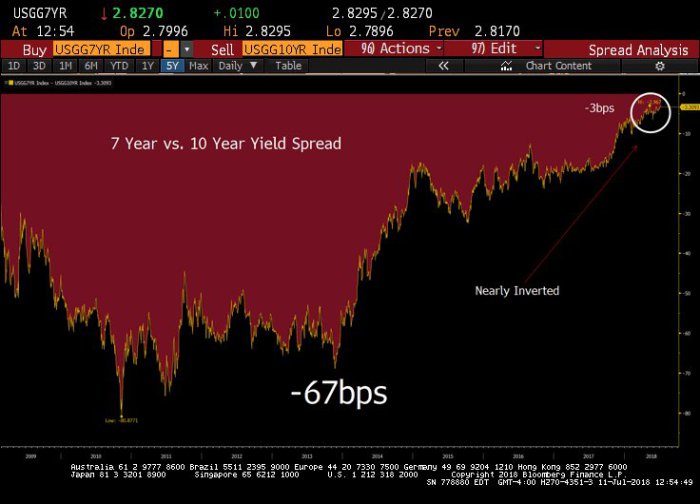 But despite all this bullish talk, the Treasury curve was essentially unchanged this week, except for the 2-year yield which was up 4 bps. Was that because, as Greg Harmon of DragonFly Capital warned last week, TLT was hitting resistance from underneath? So this week’s flat action in Treasuries could be consolidation. Or if the early look of a MACD reversal proves right, we could get a correction in Treasuries. Markets should tell us next week.

“Stocks that are leading are poised to outperform but, on the index level, the expectation of the continuation of the rally is much lower; it is almost 1/2” – said Nancy Davis, CIO of Quadratic Capital , on CNBC FM 1/2.  Her conclusion was clear & succinct:

Look what happened this week – Brazil, China & India outperformed the S&P by 2:1, with EWZ up 2.6%, INDY (India’s Nifty 50) up 2.6% and ASHR (China) up 2.9%. Brazil represents the value, beaten-down play in EM but what might represent the growth part? J.C Parets answered that this week in his article Nifty 50 Makes 5-Month Highs:

But what about the falling Rupee? Guess what the top Rupee forecaster said, per Bloomberg?

What about a contrary opinion?

5. US Indices Breakout – True or False?

The Russell 2000 was the first major index to make a new high. Then look what happened: 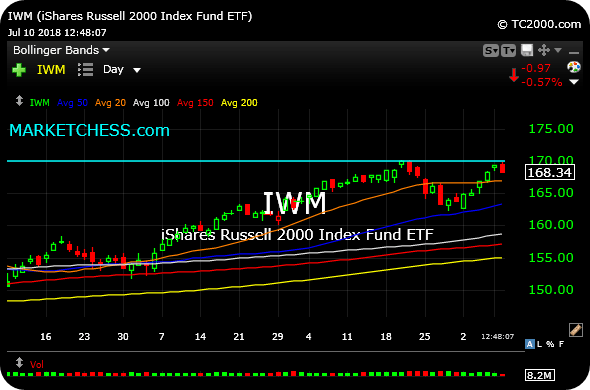 Instead of following through, $IWM actually closed down 1.4% from its Tuesday high & down 40 bps on the week, the only major US index to decline this week.

Then came the high in Nasdaq 100 or NDX. Is that a true breakout or a false one?

Greg Harmon wrote in his article Nasdaq’s Next Move: 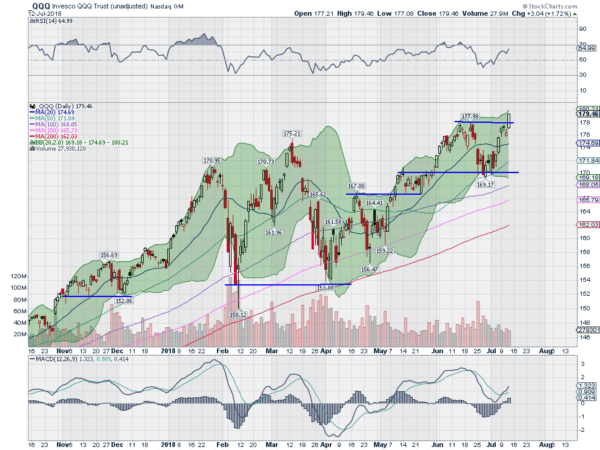 He was not the only one:

What about the other side? 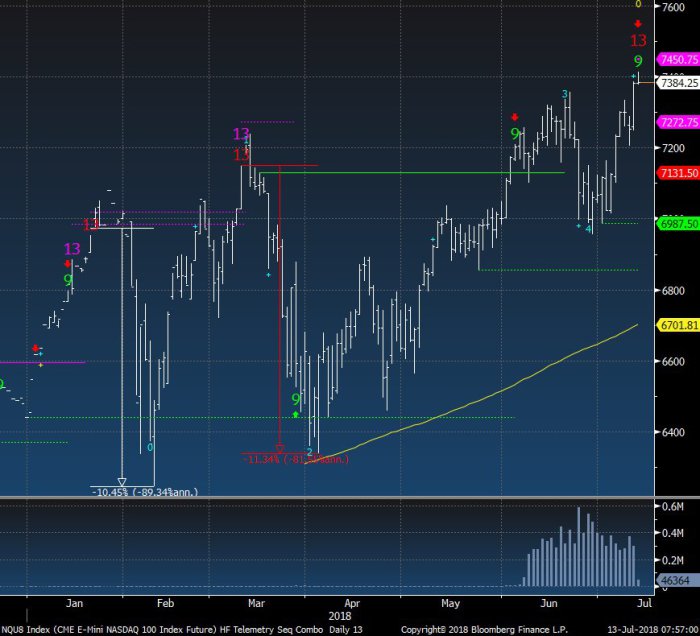 Just words & pictures or some trades as well?

He was not the only one:

Two weeks ago, we highlighted a tweet by Cam Hui pointing out a bullish divergence. Last week, we featured his tweet calling for S&P 2800. We got that on Friday. What does he say now? 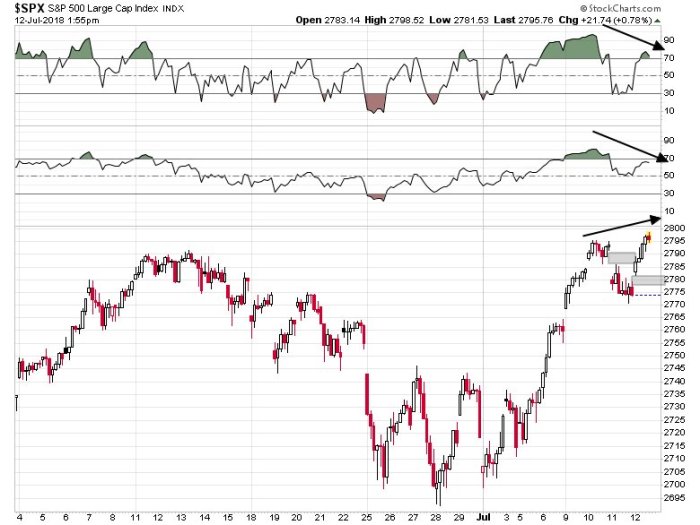 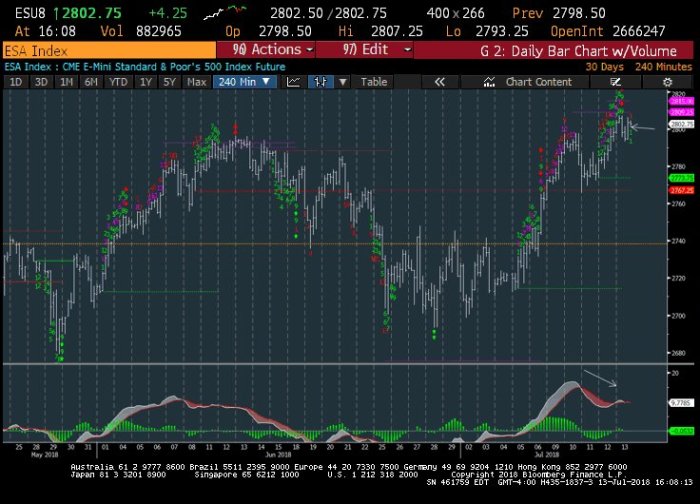 Rick Santelli pointed out that S&P’s weekly close above 2786, June high, represents “breakout country“. And next week is Options Expiration. So we could see some fireworks.

Over the past few weeks, we featured smart gurus recommending Utilities & then Staples as rally candidates from “disliked’, sold-off conditions. Carter Worth of CNBC Options Action was one of them. This Friday, he stepped out & suggested buying Financials, esp XLF. Yes, he had seen major banks sell off in the morning despite good earnings. But he said he was surprised by “how well they recovered intra-day“.

Getting to the fundamentals of Netflix & its drive to build content, @Jo_Livingstone wrote in the New Republic:

This series received a 100% rating on Rotten Tomatoes. We recommend this series to readers. It is totally unlike typical Bollywood productions and more like hard hitting films that appeal to a smaller niche. That makes it ideal for Netflix viewers. The villain is played by Nawauddin Siddiqui whom Ms. Livingstone describes as:

What we liked was the realistic portrayal of the women, the way women are described in novels instead of the plastic images of Bollywood. The dialogues are real and hard.

The series does wander a bit in the middle but as Ms. Livingstone wrote: