What a perfect call at the beginning of last week, especially from some one who is negative on US corporate credit & stocks!

Except for US stocks rising, the other asset classes behaved contrary to current positioning:

Look at the action courtesy of Chairman Powell: 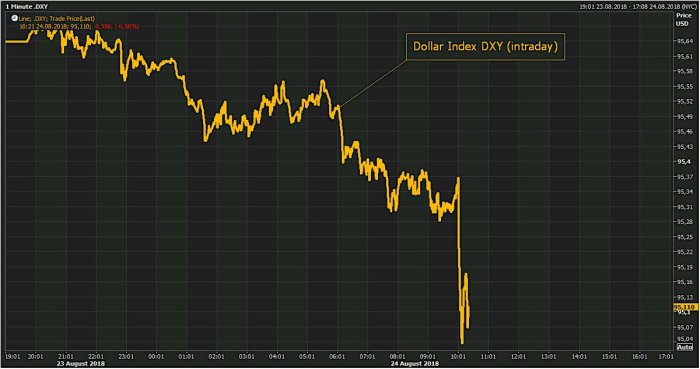 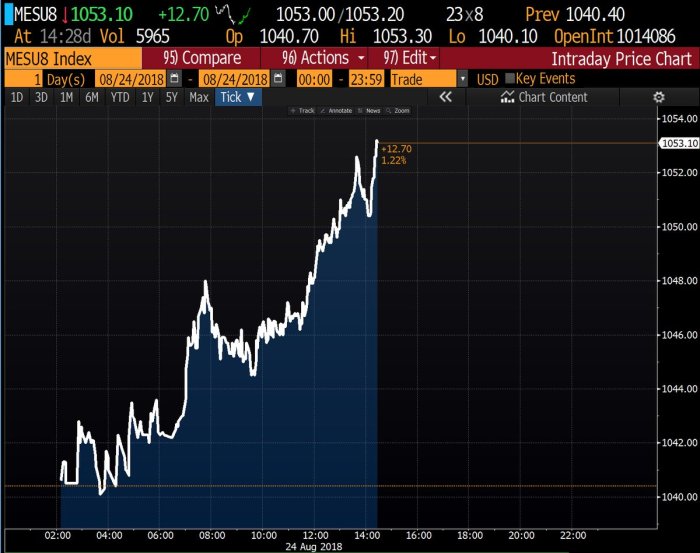 And that is a big positive for global growth, right?

Fedhead Bullard also deserves credit because he said in the morning that he doesn’t see the need to raise rates in 2018 and that inflation is not a worry. If it does rise, then the Fed can act quickly.

So rates will be stable to down, Dollar will be stable to down & inflation is tame – remember Larry Fink who wondered if this year will prove to be 1994 instead of 2000 or 2007? Remember the Orange County, CA bankruptcy, the Mexico crisis, the carnage in Treasury bonds in Q2 & Q3 of 1994? The 1994 stock market meandered through it all without going down. Then the Treasury bonds rallied like crazy in Q4 1994 because inflation had been killed by Greenspan and the stock market took off.

The US economy is also showing a dip in its trajectory leading to the above scenario:

The one fly in the ointment is corporate credit, more precisely what David Rosenberg is warning about investment grade credit. Remember when he warned about corporate rate spreads blowing apart within 6 months, a month ago? He repeated a form of that warnings this past Monday:

If the global slowdown begins to affect the US economy faster than any one expects is one reason. Second is what happened in Q4 1994. Gundlach has already talked about a big short squeeze of the all-time high shorts in 10-year Treasuries. On Friday, a bond trader talked about the 10-year yield possibly dropping to 2.34% before year-end. Her point – in every year for the past 6 years, the 10-year yield has touched 2.34% except this year. So possibly it might get to 2.34% this year as well.

We have seen what nature has done this year and as we write this, Hawaii is experiencing flash floods. Remember Complexity Theory argues financial markets & climate are both complex systems that act similarly. So wonder what might happen if we see a bonfire of the shorts in rates or a flood that wipes out longs in currencies.

But what if corporate credit starts showing cracks before the yield curve inverts or the economy slows? Remember what David Rosenberg said on July 24:

What made Rosenberg say that?

And that may not be far away, at least according to a Bloomberg neural net algorithm: 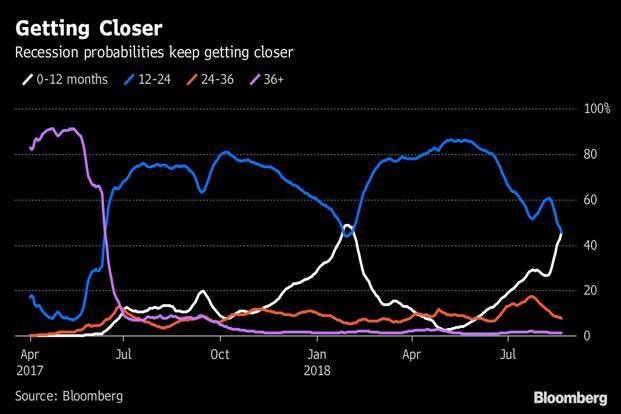 Our bet is that Chairman Powell knows it too. We don’t think he wants to go the way of Greenspan in 2000 or Bernanke in 2007 – meaning he doesn’t want to go down in history as the Fed Chairman who created a 3rd massive recession in the country. And like President Trump & unlike Greenspan-Bernanke, Chairman Powell has been an investor, a private equity investor who knows what happens when liquidity gets too squeezed & bubbles go bust.

What about the storms in the cup of this week? Oh wait –

Four major indices made new all-time highs on Friday including the all important S&P 500. The S&P took more than six months to make a new high. Does that mean anything?

That means no double top at this level. But it doesn’t mean the sailing is smooth in the near term: 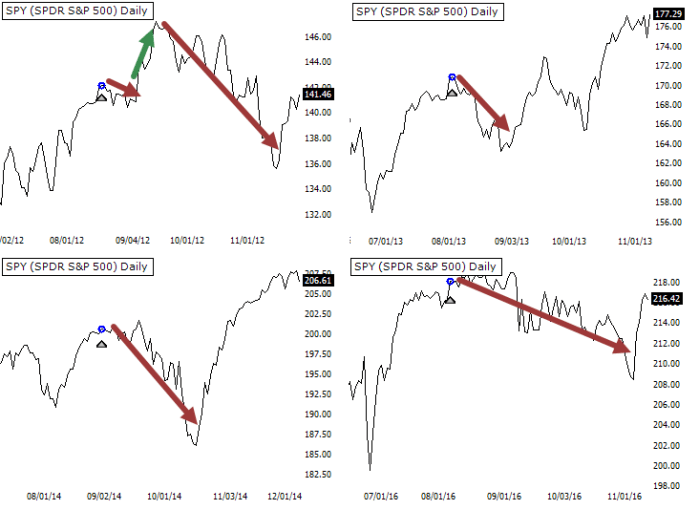 That’s fine. Small ups & downs are a part of every journey. Of course, a deep valley is a very different thing. Lawrence McMillan of Option Strategist has wondered whether the dreaded double top could happen again. To that end, he has discussed the double top of 2000 & the double top of 2007 via charts. 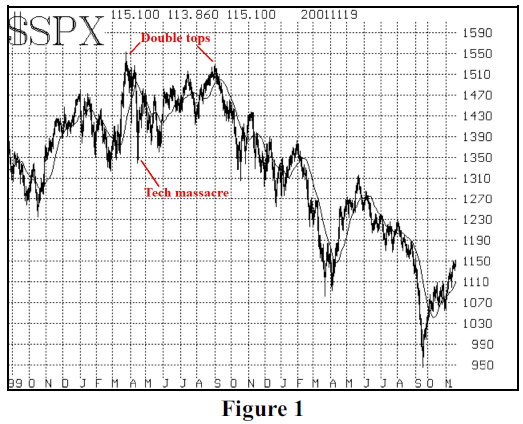 The first top was March 2000 followed by a tech massacre in April 2000. The market recovered & “pushed back toward the all-time highs at 1550, nearly reaching them in August 2000.” Then the deluge.

This week he published the chart of the 2007 double top: 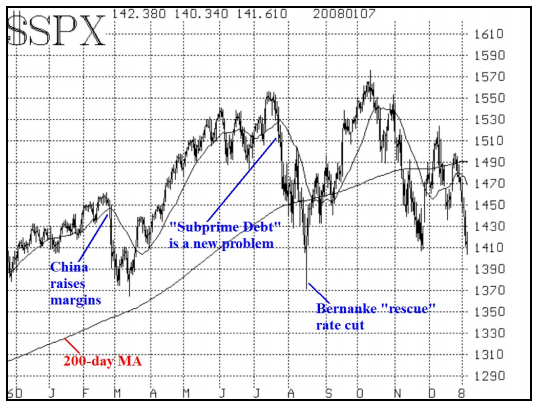 The S&P made a new high in July. “Then, for the first time we heard the words “subprime debt,” and the market took a tumble. Fed Chairman Bernanke stepped in with a “rescue rate cut,” and $SPX merrily traded up to new all-time highs (by a small amount) in October. ” Then, as he writes, “a bear market started although it was slow and methodical at first – disguising the devastation that was to come.”

Let us be clear. The above are not as his forecasts, at least not to our understanding. In fact, his summary on Friday, August 24 is simple:

That is why it is important for the S&P to decisively trade & close above this Friday’s close. And that might need President Trump’s win in November ideally with Chairman Powell’s smart easing of liquidity before the election.

3. The Dollar & Its Adherents

EM stock markets rallied hard on Friday and many outperformed the S&P 500 on the week. That led one chartist to suggest: 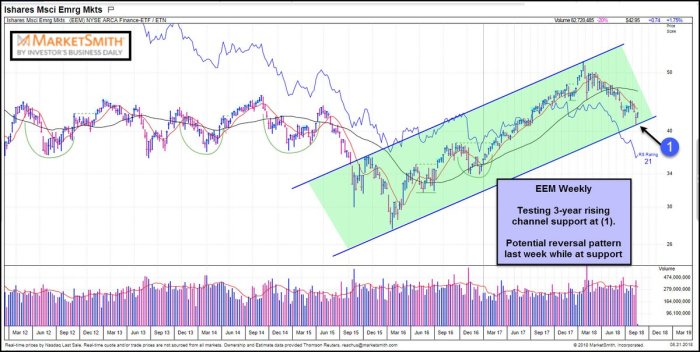 As readers know, we stopped covering Gold & Gold Miners several weeks ago because we couldn’t find any one who was consistently right. We make an exception today, mainly in honor of Chairman Powell’s speech on Friday.

That seems long term. Any one suggesting short term reversal? 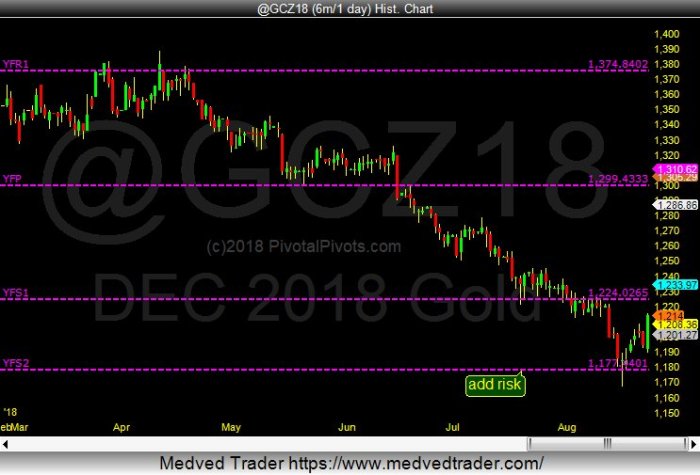 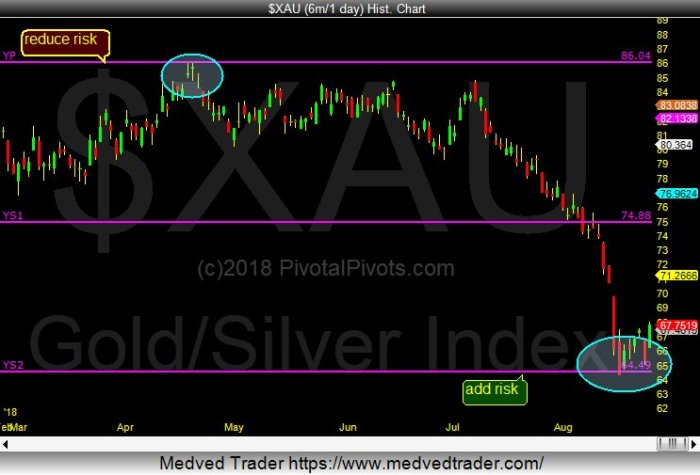 All this assumes that the action in the U.S. Dollar on Friday was not a trap.

Prior to its earnings on July 16, we introduced, in Section 7 of our article on July 14, the premier of Netflix India originals titled Sacred Games. That series received 100% Rotten Tomatoes Rating. It was as the review in the New Republic said “a sophisticated move in Netflix’s quest to net every eyeball on earth“.

On this Friday, SunTrust upgraded Netflix to a Buy to a large extent based on the potential of Netflix India Original series:

Netflix India has huge plans & if their biggest investment succeeds then its market share in India could soar. How huge?

Now Netflix India is launching the prequel Baahubali before the beginning with the same team that made the Baahubali movies. It will probably be a lot more expensive than anything Netflix has done in India or in many places in the world.

Baahubali the beginning began with the Queen Mother Sivagami saving her grandson before dying:

The grandson is saved & brought up as her son by a female leader of a small community. He grows up to challenge his evil uncle, the King, who had arranged for the murder of his father & rightful king. The sequel begins with Queen Mother Sivagami & Baahubali’s father and ends with her grandson killing his evil uncle and restoring the greatness of the Mahishmati Empire:

If the Netflix prequel is even 25% as spectacular as the two Baahubali films, Netflix India could soar in its market share. And this expansion is happening just as 4G is getting introduced in India. And traffic jams are forcing people to watch their favorite entertainment at home & on smart phones.

The Netflix commitment goes to demonstrate what we have been saying for some time – a large presence in India is a must for every global entertainment company. If that is true for today’s India with 600 million people in poverty, how true would that be in 10-20 years?

Readers, both Baahubali the beginning & its sequel Baahubali the conclusion are on Netflix (with excellent subtitles). Watch them. Netflix isn’t dumb to bet so much on the Baahubali franchise.

How simple is it to say “Raajan”? But for some reason, “professor” Steve Liesman keeps butchering it. There are a few Indian Americans in CNBC. Why doesn’t he ask them? Or he could ask Sara Eisen who pronounces it perfectly. We just don’t get it. Steve Liesman is a good guy, we think. We really don’t think there is any racist tinge to him. Then why the adamant refusal to correctly pronounce the name of an Indian monetary theorist whom he obviously respects?

Then there is our jinx about CNBC. Every time we feel positive about a CNBC anchor, that anchor goes out and does something really bad. We have been impressed with the diligently accurate pronunciations of Indian names by Sara Eisen. Then she did something that shocked us.

On Friday afternoon, Sara used the adjective “lame” to suggest an argument was weak & pathetic. And we had assumed using physical disabilities in a pejorative sense to ridicule others was a thing of the past. Sara should look at photos of US veterans with disabled legs because of their service to the nation in Iraq, Afghanistan & other remote parts of the world. And that too at a fraction of the money Sara makes as a CNBC anchor.

Sara’s colleague, Michelle Caruso Cabrera, once termed herself & her anchor colleagues as “narcissist”. That is too self-serving, we think. May be every TV anchor eventually gets infected with a condition we call Anchoritis – a feeling that TV Anchors are above every one else, that they have a unique station in society that no one else has. May be this Anchoritis condition is behind Steve Liesman’s refusal to pronounce “Raajan” and Sara Eisen’s pejorative use of “lame”.

The big question is whether Mark Hoffman & Nik Deogun foster such Anchoritis at CNBC or will they act to cure their network of it.