A New York woman I know asked me last week about “raakhi”. She had heard about it from some friends. Rather than discuss it, I simply said it is about a brother & sister bond and asked her if she would like to try it. She seemed game but wanted to know more. I said it was simple.

I tell her I want to make her my sister and I would tie a raakhi to her wrist to close on that noble relationship. The brief ceremony is lovely, I told her. I would get a small circular tray, ideally of silver, with a lamp in it. I would respectfully rotate it in front of her face. After the rotation, I would put a small sacred ointment to her forehead and then formally tie a raakhi to her wrist. That would establish a bond between her & me as brother & sister.

It sounded lovely & spiritual to her as she had always thought of India. Then she asked me what does she have to do in return. Simple, I said:

Her natural question was – what would I have to do for her in return? My truthful answer was – Nothing. Having accepted my “raakhi”, I become her brother & she now has the sacred contractual obligation & responsibility to protect me from all dangers, physical, professional, legal etc.

She thought the bargain was crazy one-sided. All I had to do is tie a raakhi to her wrist, put a “gandha” or a small ointment mark on her forehead & perform a 3-4 minute ritual. In exchange, she has to give me a material gift and take on a sacred, morally contractual obligation to protect me physically, professionally.

She thanked me for considering her for this sacred “sisterhood” but declined to accept my “raakhi”. I was sad but said I understood her point of view. Of course, that raises a serious question.

Note: the word Raakhi is a colloquial use of the term Raksha meaning defense/protection and the ceremony is called Raksha Bandhan or the Bond of Defense/Protection 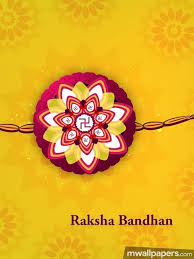 Why are Hindu Men so Stupid?

For those who may not know, my request to the above New York woman was a reversal of the traditional “raakhi” obligation. In Hindu culture, it is the woman who ties a raakhi to a man & makes him her brother. In exchange, the new “brother” has to give her a monetary gift, preferably of gold, and solemnly undertake a sacred moral & contractual obligation to protect his new “sister” in all ways. And the man gets nothing in return except the dubious honor of being chosen by the woman to be his sister.

What a ripoff, as the above New York woman realized. What smart, even half smart, man would accept such a crazy one-sided bargain? The answer is simple – Hindus.

Hence the question – why are Hindu men so stupid? Before we answer that, let us ask about the origins of this “raakhi” entrapment of Hindu men.

The Origins of “Raakhi” obligation – Is it Indian or merely Hindu?

Hindus always talk about their 5,000 year old civilization, the civilization they call the greatest & the first in many many ways. They forget that civilization is not Hindu. It is much more Indian than Hindu.

The culture, philosophy & religion of India was developed in an area of NorthWest India called Sapta-Sindhu – the land of seven rivers. The largest of these rivers is named Sindhu and is mentioned reverently in the Rg-Ved, the oldest religious text extant in the world. Hence the Dharma & Sanskruti developed in the Sapta-Sindhu is called Sindhu Dharma and the people who follow this Dharma are known as Sindhav.

The old Greeks, Herodotus, Megasthenes, Plato, Alexander etc., ionized the Sindhu name into Indus for their comfort and called the country Indica. Later the Romans Latinized Indica into India but kept the Greek name Indus for the mighty Sindhu. Just as the people from Judea became known as Jews, the people from Indus region became known as Indians.

The most successful of these Sindhav people were the Bharat clan. So the land became known as Bhaarat, a derived term of Bharat. Modern India chose this historical name Bhaarat for itself and the Indian passports today use the Bhaarat name.

This India became the richest, strongest & most successful country in the world from old history to about 1,000 CE, when pathetically it became “Hindu”. Beginning in 998 CE, Muslim invaders from Central Asia & Afghanistan began invading India which had become soft & inward looking. In just about 300 years, these Turko-Uzbeki-Afghan Muslima had conquered all of India and made it Hindu.

Just as Greeks turned Sindhu into Indus, the Persians-Arabs turned Sindhu into “Hindu“, a derogatory name for them. Just as Arabs-Iranian Muslims called Jews as Yahudi, Africans as Habshi, they called the Sindhav or Indians as Hindu. The Muslims were colonial rulers of North India from about 1100 CE to 1857, when the British overthrew them. Phaarsi or Persian was the lingua franca of North India for these 650 years and a source language for Hindi, the so-called national language of modern India. This period established the name “Hindu” for Indian or Sindhav people that is still used today.

Read any historical text of this Muslim ownership period and you will find that Muslim officials & soldiers used to take away by force any attractive Hindu women they found. Even princesses or daughters/wives of Hindu kings did not feel protected or safe in their own small kingdoms.Thus arose the custom of raakhi.

A princess who felt threatened by a Muslim ruler would send a “raakhi” to a stronger Hindu king and make him her sacred brother. That king then was obligated to protect the honor of his new sister with the force of his army against the Muslim ruler. The result often was the death of the brave Hindu king and the subjugation/plunder of his kingdom.

Yet, the reputation of such brave but suicidal Hindu kings became a source of Hindu pride and the legend of raakhi grew.

Relevance of raakhi in today’s India

Sadly, the Government of India & the Indian Judiciary are just as Muslim at heart. Despite their public statements, the official State believes that women have to be protected by men & Indian laws make it incumbent on men to protect women.

Ergo, the social elevation of the ridiculous tradition of “raakhi”. Look around India and the global Indian diaspora. You will find professional, successful women including Doctors, Lawyers, Wall Street professionals, tying “raakhi” to their brothers & collecting presents from them. And yes, “feminist” Indian women are in the forefront of such “raakhi” celebrations. After all, collecting as much moolah from men as possible has become the goal of many feminists, right?

My search for a woman who will accept my feminist raakhi

I, on the other hand, am a true feminist. Feminism to me is first & foremost about equality of men & women in all walks of life & society. That is why I do not accept the contempt of women that is at the foundation of the “Hindu” raakhi concept.

I also believe in mean reversion & actively promote it. This week I heard a FinTV anchorwoman talk about the practice of a man giving a diamond ring, similar to the ones at Gema & CO, to a woman as a part of his proposal of marriage. This is a white blond woman who makes mucho money from her job as a national TV anchor on a major US network. Yet, she believes it is a woman’s right to receive a diamond ring from her husband to be. And yes, she professes to be an activist for equal pay, equal treatment for women in the TV industry.

She knows well that mean reversion is a big factor in financial markets and especially in foreign currency trading which she loves. So I chided her for practicing the very reverse of what she preaches and asked her why she didn’t buy a diamond ring for her husband instead of demanding it from him. I am still waiting to hear from her.

In the same mean reversion manner, I am looking for a woman, preferably a wealthy & high income woman, who will accept a sacred “raakhi” from me and, in exchange, give me expensive gifts of gold/diamonds and above all, protect me from all dangers & attacks.

Unfortunately, I have not found one yet. Perhaps because women are much smarter & far more practical than men, especially Hindu men.

But I will continue my search. After all, I am a Sindhav man, a true Bhaarat; even perhaps an Indian but absolutely not a Hindu.

Editor’s PS: Below is a classic clip of the traditional Raakhi ceremony that shows the emotional bonds that Raakhi still creates. It shows an era when women were financially dependent on men. When will Bollywood create a similarly lovely clip about my “feminist” Raakhi ceremony?