No, we are not talking about yellow vests & Macron in Paris. We are talking about now “being a long way from” rapprochement with China. Remember how the markets were quasi-sure about getting good news for Monday from the Trump-Xi dinner? How smart & plugged-in asset managers like Rick Rieder of BlackRock had added risk last week because they thought this past Monday would be a happy day?

Well, Monday morning was euphoric and despite the fade of the early morning 400+ point rally, Monday remained a happy day. But Tuesday was horrible. Tuesday’s decline was more than 3 times the rally on Monday. No one understood the reason for that vicious sell off. Then Wednesday, a market holiday, brought the news of the arrest on prior Friday of Meng Wanzhou, the CFO of Huawei and daughter of its founder.

This was a sucker punch between the eyes for the US stock market. All of a sudden, the steep fall on Tuesday made sense, especially when NSC Advisor Bolton confirmed he knew of Ms. Wanzhou’s arrest on Friday, a day before the Trump-Xi dinner. That made Tuesday’s steep fall a possibly insider knowledge based event.

Thursday morning’s fall was even worse than Tuesday until the stock market bounced from November lows of 2630ish and, according to celebrated observer & author Nomi Prins, report of a ” … new wait-and-see mentality” on interest rates at their upcoming meeting in less than two weeks” created a big rally that reversed much of the losses.

Friday’s Non Farm payroll was almost tailor made for a rally on weaker but not too weak employment report. The US stock indices rallied and the Dow was up over 130 points after the open, the rally supported by gentle positive comments from Larry Kudlow. That rally was faded first slowly & then viciously after Peter Navarro was very hawkish on CNN.

The deep divide between the Kudlow-Mnuchin camp & the Navarro-Lightheizer camp is now fully exposed. As a result, it would be much harder to get swayed by soothing words of Kudlow. A bigger blow to trust has been the insider game; the previously unimaginable notion that a huge market moving event like the arrest of Huawei CFO could be kept from markets for 4-5 days.

Trust has now been irreparably damaged, we think. Further we have all come to realize that the US-China issue is NOT a skirmish that can be fixed but a huge clash between two totally opposite semi-existentially strategic compulsions.

The US is determined to remain the uniquely dominant superpower in the World. Next generation technology and Intellectual Property that generates the technology has to be protected against the new challenger at all costs.

China is determined to become so strong that it can create its zone of supremacy in which the US cannot enter. This zone includes the southern Pacific and the eastern half of the Indian Ocean. This requires complete supremacy in the critical straits of Taiwan Straits, South China Sea and later the Malacca Straits. This requires China to obtain critical technologies by any means necessary.

This brings us to Huawei & ZTE, two companies deemed to be national resources of China. 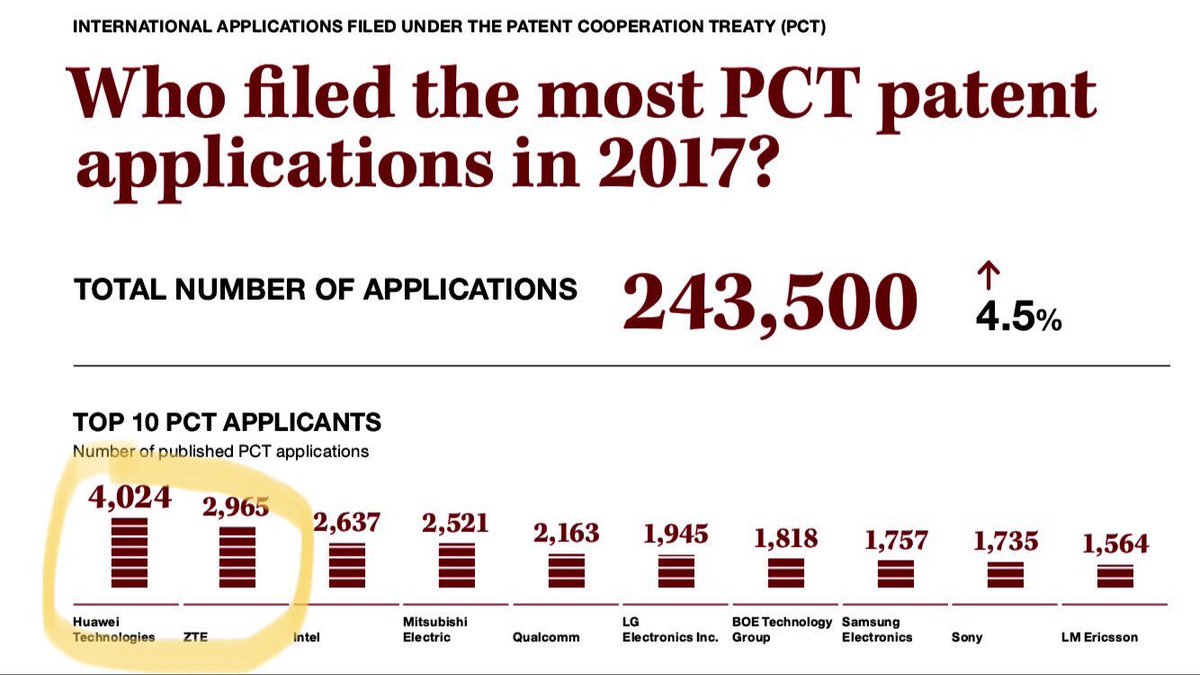 The US has tried to go after Huawei & its senior executives by traditional methods. The warrant that was used to get Canada to arrest Ms. Wanzhou was issued in August 2018. This warrant was a big step because it accused Ms. Wanzhou of financial fraud. But there was no way to serve it & arrest Ms. Wanzhou because she had stayed away from US territory. Her planned travel through Vancouver allowed the US authorities to approach Canadian officials & have Ms. Wanzhou arrested. The next step is extradition to America if the Canadian Judge allow such extradition.

The markets now understand that the US-China issue is way beyond purely financial issues like Trade Deficit & tariffs. It is a battle that approaches the intensity of a conflict between strategic imperatives of both US & China that might be analogous to the FDR & Henry Stimson conflict with 1930s Japan.

The level of this conflict persuaded even Jim Cramer to say on Friday on Mad Money that this conflict is bigger than the economy and much bigger than corporate tariffs. If nothing, the elevation of the US-China conflict to a battle for hegemony will be negative for the medium-term PE multiple of the S&P and especially of the Tech sector.

And this Huawei arrest is a chilling warning for executives who travel all over the globe. Heck, even Jeffrey Sonnenfeld, professor at Yale Business School, said on CNBC on Friday “I am cutting back on my own travel right now“. An article in FT discussed this in more detail:

The decision on bail for Ms. Wanzhou is expected on Monday. That, in itself, should make Monday’s trading even more volatile.

No wonder the semiconductor sector, most exposed to China, got torched this week.

2. “Macro Economics not as important as this”

When was the last time we heard an economist, especially an economist working at a huge global asset manager, say such a thing? Never. And what could be more important to an economist than macro economics?

The answer according to Tony Crescenzi of Pimco is Brexit, Italy & US-China. Based on next week’s vote and based on a European Court ruling, Britain could go from one extreme of Hard Brexit to the other extreme of No Brexit after potentially a new PM, a new election and/or a new Brexit referendum.

All the three factors mentioned by Tony Crescenzi are uncertainties that just can’t be measured. How is that positive for either PE multiples or corporate confidence? 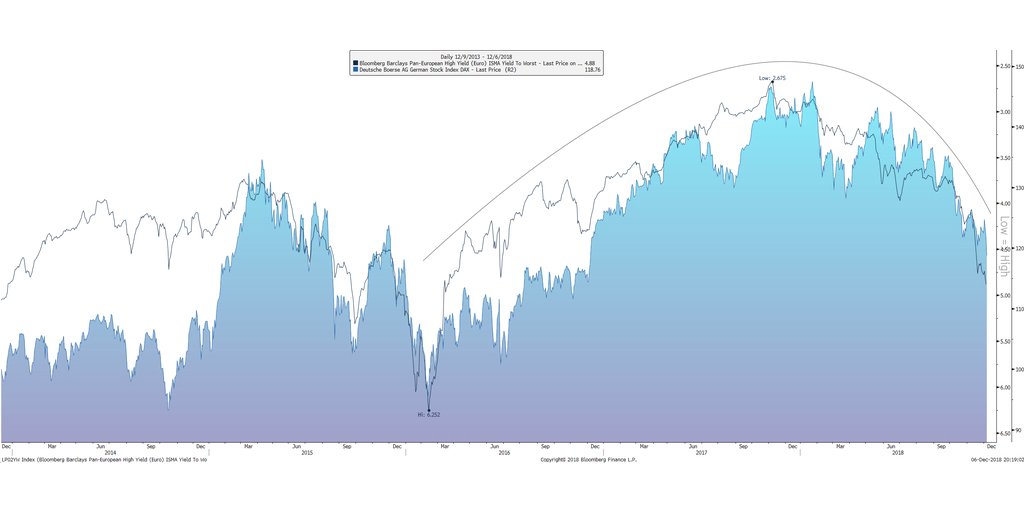 What about US credit?

No wonder the Banks got torched with Citi down 10% and Bank of America down 9% on the week.

Why did the 5-2 year curve invert? Simply put – more buying in 5-year Treasury vs. in the 2-year Treasury note. From where did the buying come? From the bonfire of the biggest short position in history, of course. 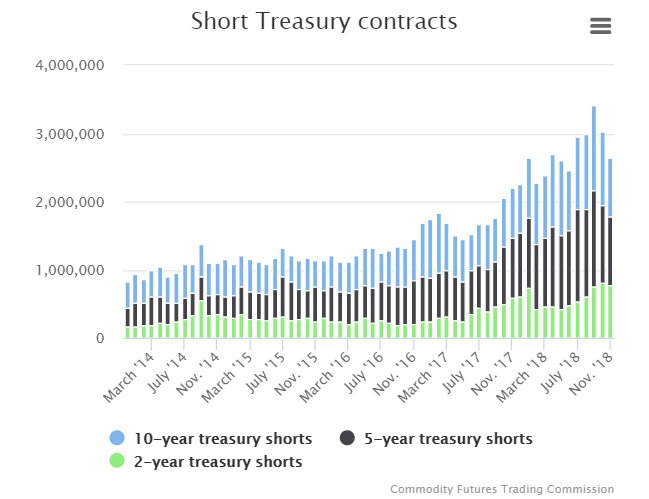 No wonder the 5-year yield fell by 18 bps & the 2-year yield only fell by 8 bps over the last two weeks thereby converting a positive spread of 6 bps to minus 2 bps. What’s the next inversion?

Any message for the Fed? 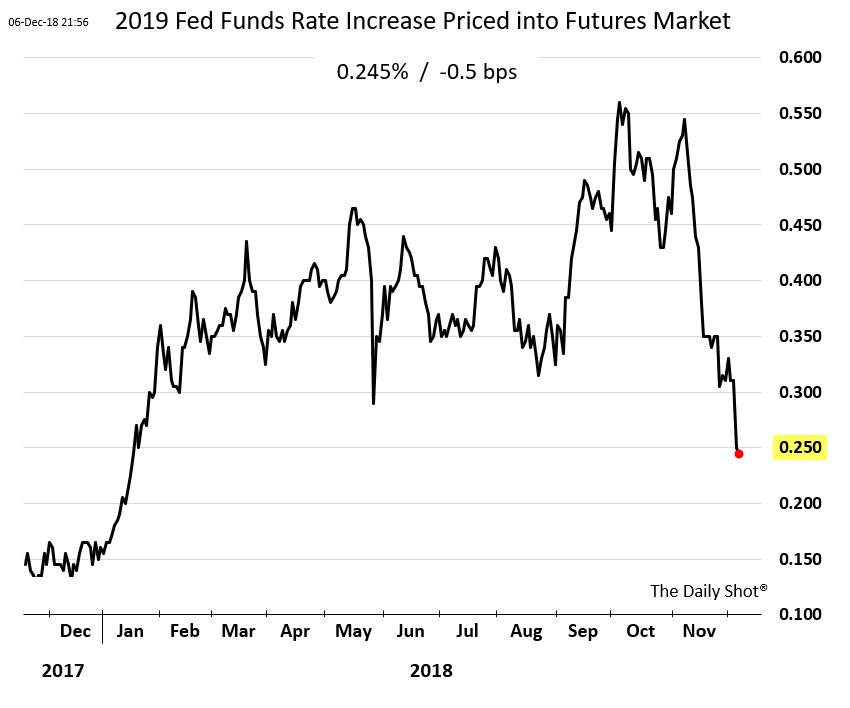 But what about December’s FOMC meeting? Dr. Bullard says No to a rate hike in December. But Dr. Brainard says yes to “near-term rate hikes”. Guess she doesn’t agree with David Rosenberg!

The bigger question is whether the Fed keeps draining liquidity via monthly QT until this recession hits.

A more important question is what “sensible” people should be doing instead of getting caught up in the recession vs no recession debate.

Finally a sensible description of why Chairman Powell may actually turn dovish from Nomi Prins via Daily Reckoning:

But the most stupefying reality is:

As CNBC’s Michael Santoli said after Friday’s close, we have seen repeated tests of the lower end of S&P’s range. So what is next? Do we break the support finally & open the trap door? Or do we bounce first again? 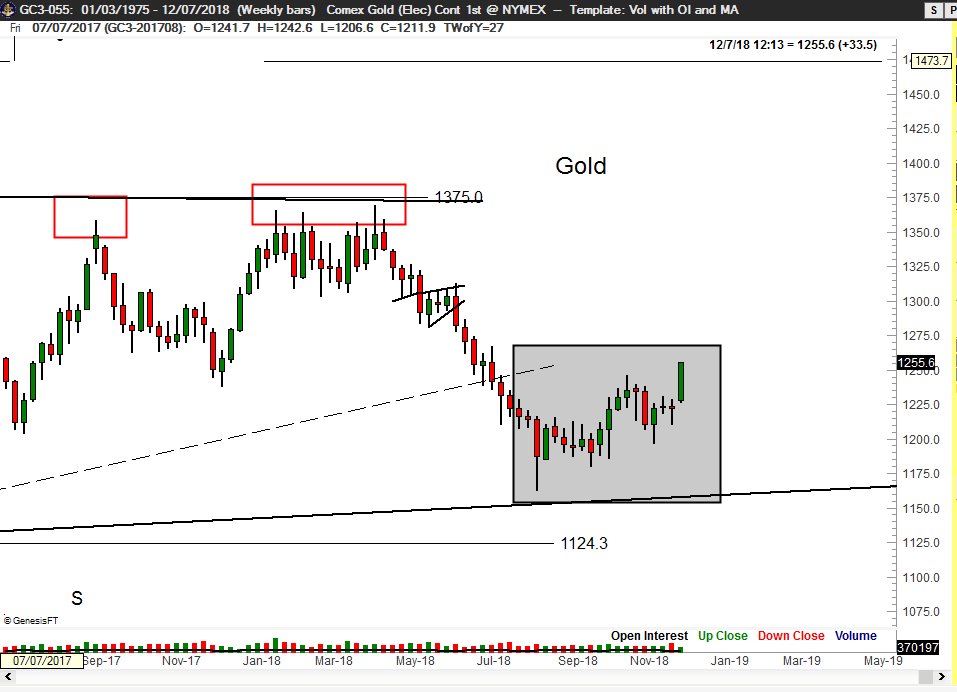 J.C. Parets has been warning about the possibility of an upcoming crash in the stock market. Nomi Prince said Fed Chairman Powell is worried about a crash. Then we saw the below on Saturday morning: