1.Happiness abounds but too early?

Last week we wondered whether the end of the uncertainty trident would prove bearish or bullish for the stock market. They answered clearly with a terrific week in the stock market. Except for a tiny negative close on Wednesday, the indices closed positive every day. In fact, Nasdaq & NDX closed up every day regardless of what interest rates did or what the Dollar did. The Dow closed up 1.1%; S&P up 1.6% & NDX up 2.2% . Russell 2000 also closed yo 2.2% on the week.

The relentless upward move began generating sell signals from several smart folks. Jim Cramer pointed out that the S&P oscillator he uses hit am overbought +5 which suggests selling or at least not buying more. Tony Dwyer began murmuring about a pullback. Some were direct: 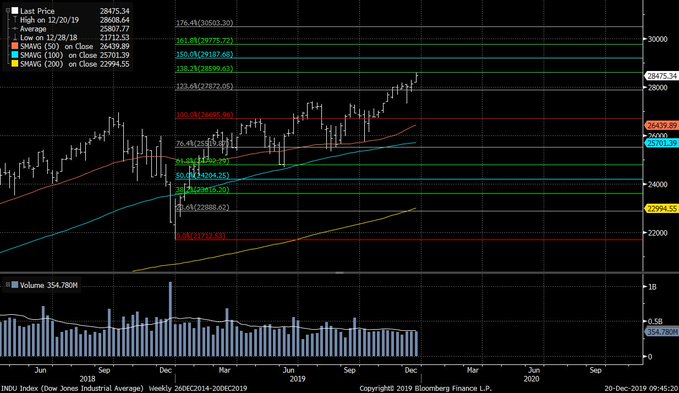 Even the consistent advocates of 2013 parallel chose discretion over valor on  Friday: 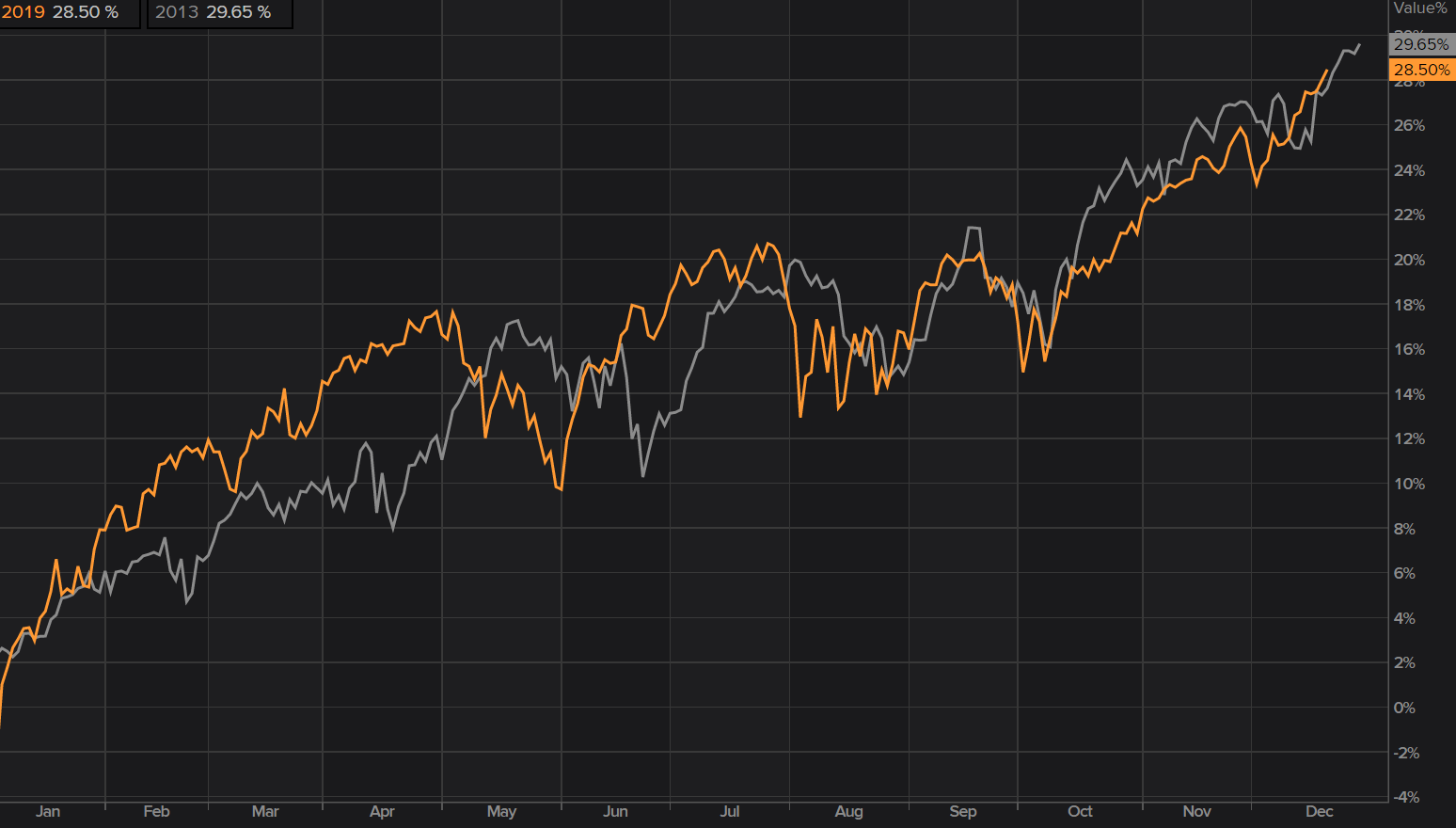 But wait a minute. The Santa Claus rally has not even begun & will not begin till Tuesday. As Jeffrey Hirsch of Stock Trader’s Almanac explained on CNBC Worldwide Exchange on Friday, this rally is a 7-day event with 5 finals days in 2019 & first 2 days in 2020. So if the above sell recommendations prove correct, then we will not have a Santa Claus rally in 2019.

Is it really possible this glorious 2019 would end with such a whimper? And, as Mr. Hirsch reminded viewers, “if the Santa Claus rally should fail to call, then Bears may come to Broad & Wall“.

Of course, we could see a sharp sell off early next week & then see a strong rally post Christmas to satisfy both camps. Frankly, the real problem for many investors is the tussle between an intense desire to not sell until 2020 to avoid taxes and a deep fear of being caught holding the bag as others sell before year-end.

On the other hand, you have the statistical case of December returns getting realized in the latter third of the month: 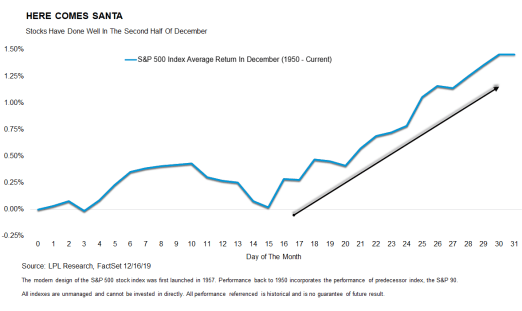 But the overbought signals for the EM rally suggest caution:

So what to do? Perhaps follow the simple wisdom of Lawrence McMillan of Option Strategist:

And the case for a good 2020 for stocks seems a safe bet from statistical history, a nearly perfect environment for risk and an increasing likelihood for reelection of President Trump.

That is fine but where did we get that bit about increasing likelihood of Trump reelection? 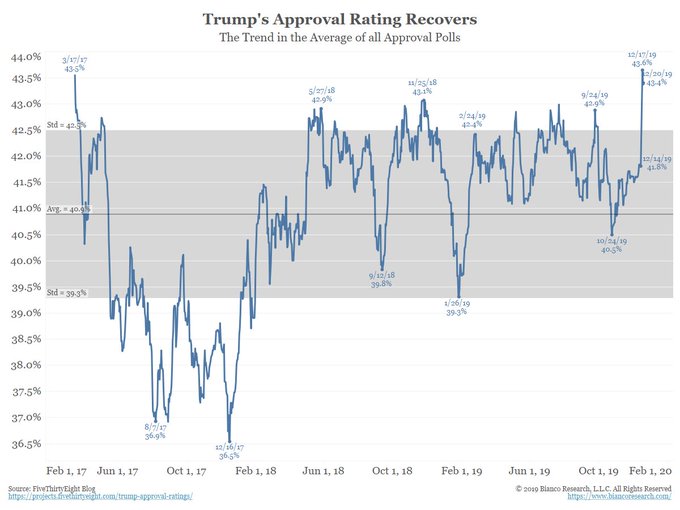 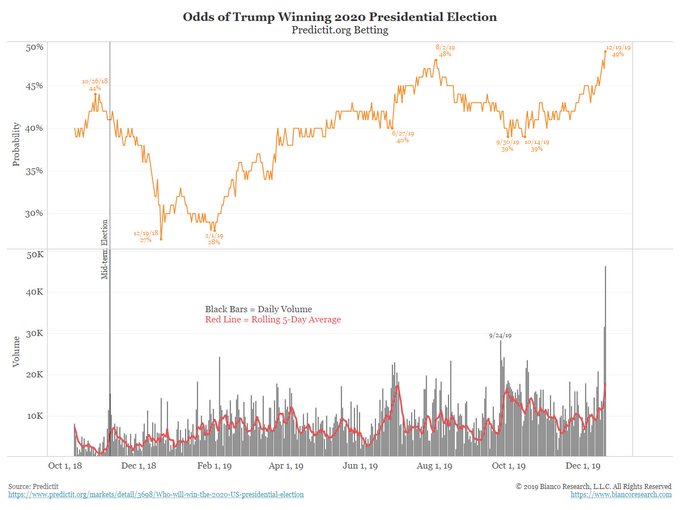 Sorry, we forgot to address a big worry expressed on CNBC Fast Money – that the Fed is trying to shove under the rug the crisis in the Repo market. But none of them see the other side of the Fed supporting the Repo market. What other side, you ask? 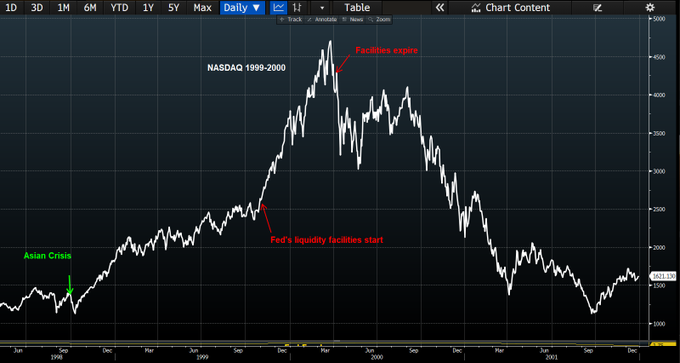 If all of the above is not enough, listen to Stanley Druckenmiller saying “for now, its all systems go” to Erik Schatzker of BTV in the first 3 minutes of their long conversation. Druckenmiller said he is long equities, long commodities (including copper but not oil), long commodity currencies and short fixed income (short the long duration Treasuries):

Later on he said it is easier for the Fed to turn from hawkish to dovish (as they did in January 2019) than turn hawkish from dovish. He doesn’t see anything that disturbs the economy or monetary policy.

That brings us to the Fed.

Druckenmiller also said interest rates are too low for today’s conditions, a comment that may be challenged by some including Jim Bianco who expects the Fed to cut rates in 2020. 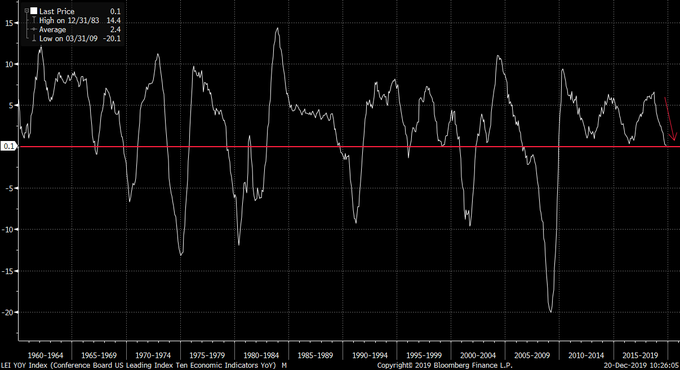 Sure, but isn’t the curve steepening due to rising inflation expectations? 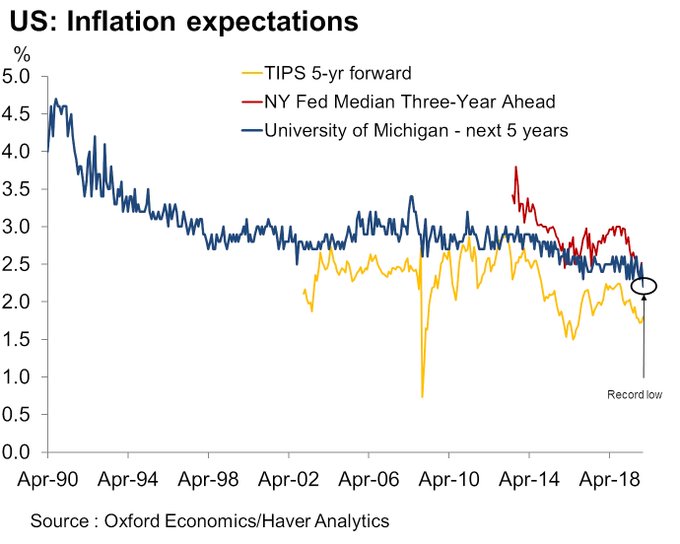 Yeah but, don’t they see “green shoots” in the global data? 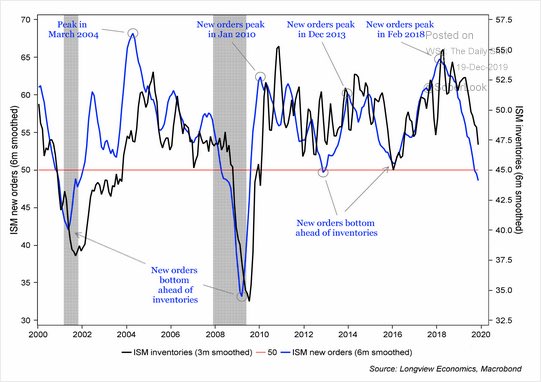 Remember the Fed has a very high bar for raising rates and a really low bar for cutting rates.  If the direction in leading indicators, inflation expectations & ISM et al keeps pointing lower, the Fed may cut rates sooner than many expect.

Add to that the statistical case made by Nomura’s Charlie McElligott on CNBC Squawk Box this week, per a transcript from Market Ear:

By the way, that trade fits the recommendation to buy Utilities sector from Carter Worth, resident technician at CNBC Options Action. Is there any support for McElligott’s short energy trade?

3. Investing for Next Decade from Richard Bernstein

There is no shortage of reports that talk about what to do next year. But not many talk about themes for investing for the next decade. Richard Bernstein did precisely that in his Investing for December 2029 piece. It is a well-written article with interesting charts & we urge all to read it. Below are some excerpts:

Regarding point 2 above, the article says:

About the 3rd Tech becomes Dreck point, the article explains:

We have always thought of J.C. as a smart guy. He just proved it again to us by posting the video below AND writing “Mumbai is one of my favorite cities in the world. There is no question about it.”

There has been nothing but negative coverage about India in the U.S. media and not any mention that, despite the credit crunch, shadow banking problems & other issues, the Indian Sensex went to a new all-time high this week. Speaking of bad loan problems & credit issues, look at the YTD weekly chart of ICICI Bank (IBN) vs. JPM.

HDFC Bank (HDB) is a larger & better bank while ICICI (IBN) trades with a higher beta. Both should be core holdings we think in any diversified global portfolio. We all know the last decade has been an All-American decade of outperformance over EM. But look at the 10-year monthly chart of HDB vs. JPM.

We really liked the video of Parets’ trip to Mumbai. But we would also have liked some charts & recommendations about the Indian stock market for 2020.