1.Financial Conditions and OR vs. Economy?

We always thought financial conditions & financial markets were an intrinsic part of the economic picture. So using this integrated view, the economy seems to be going in the right direction: 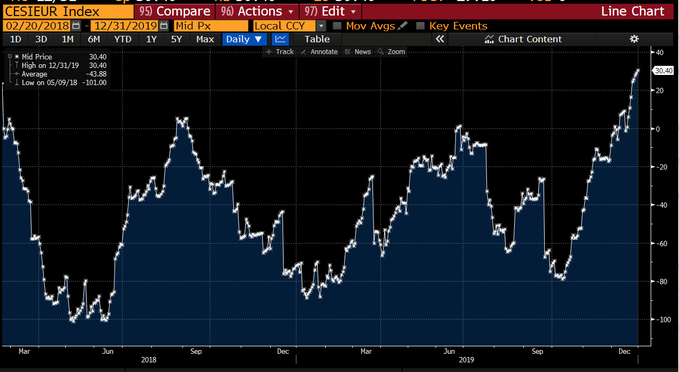 On the other hand, the segregated view looks almost recessionary: 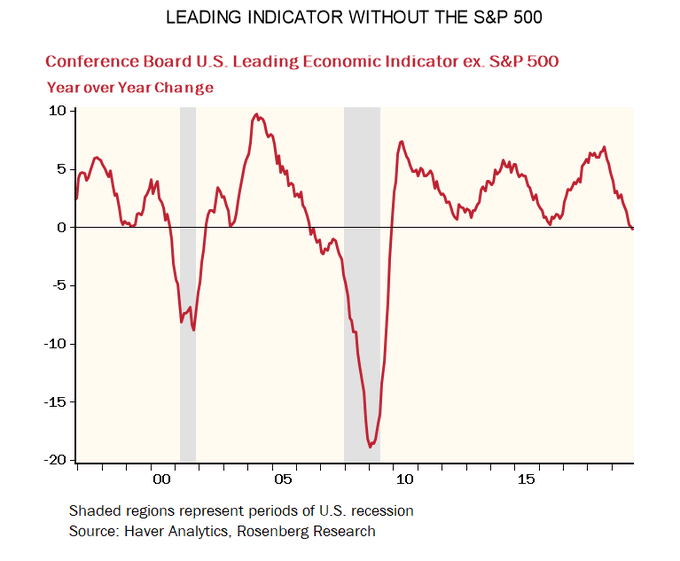 This is a big deal because the Fed’s faith in QE is founded on their conviction that easing financial market conditions leads to economic stability & recovery. But some now point to a disconnect: 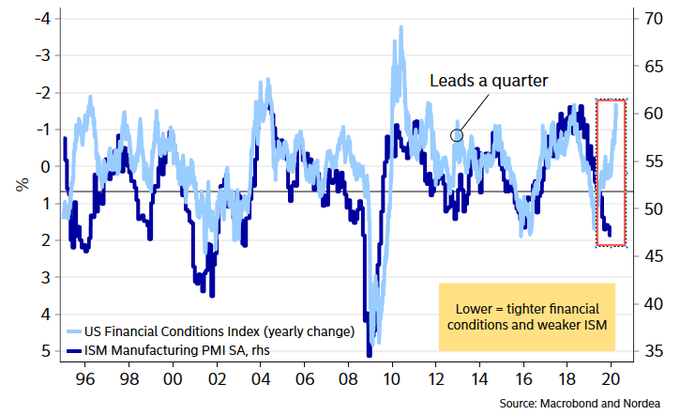 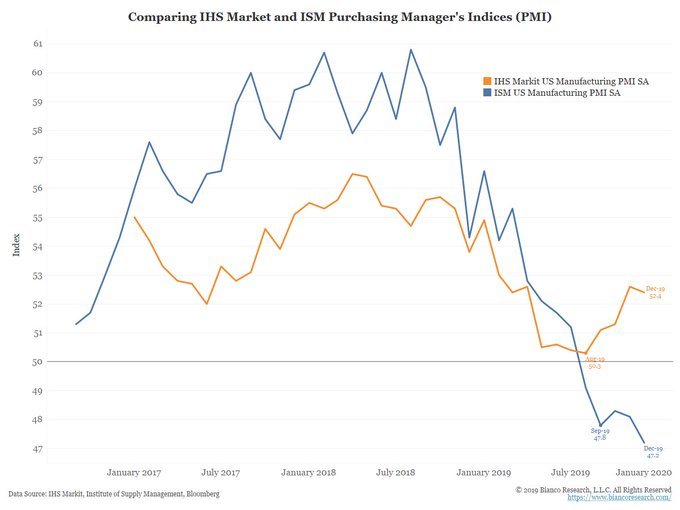 Data about the activities & near term intentions of the nation’s purchasing managers is of vital importance to understanding the U.S. economy & to making decisions about interest rates & stocks. So what exactly is going on between these two indices?

Boeing is certainly big enough to change the picture presented by purchasing managers. That brings up a question – we have CPI & CPI ex-food & ex-energy; we have Durable Goods report & ex-transportation Durable Goods report. So why can’t we have ISM & ex-transportation ISM? In fact, why not create different views of all economic reports by ex-ing out large & volatile sectors?

After all the above esoteric this vs. that discussion, isn’t it relaxing to look at a clean & clear reality? 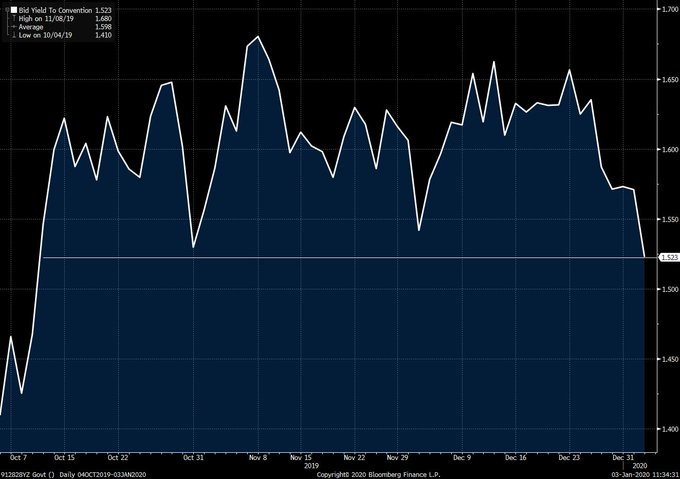 But is this as clean & clear as it looks? Does this fall in 2-year yields have more to do with the huge liquidity poured in to address the year-end Repo problem?

Perhaps, it is easier to simply measure what people are feeling? 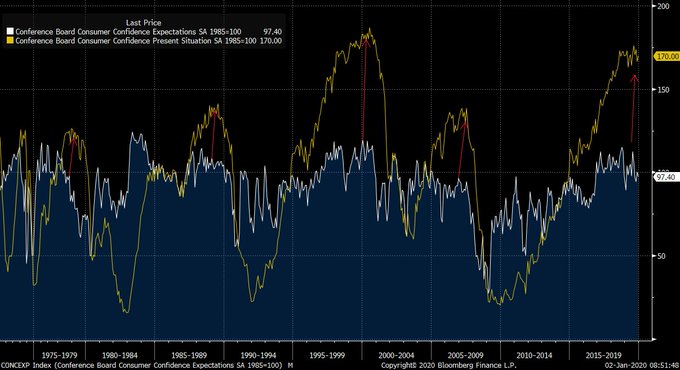 Well, what is a good indicator for an upcoming slowdown in the economy? 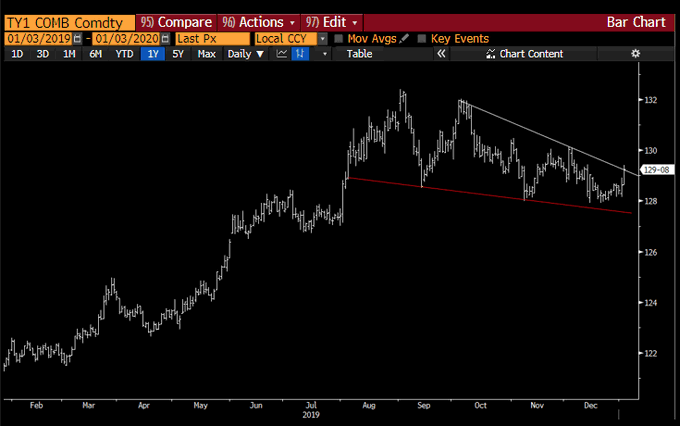 Interest rates certainly closed down on the week with the 10-5 sector down 8.5 bps & the extremities 30-yr & 3-2 yr yields down only 6 bps. But once again we ask whether we should believe these numbers? Because ex-out the safe-haven run on Friday (due to the strike on Soleimani) & rates along the 30-7 yr curve actually rose a bit on the week.

So we can’t wait until the jobs number next Friday.

Two hard down book-end days & one explosive up day mid-week is what this week was. After all that, the Dow & the S&P closed down a few basis points while the Nasdaq & NDX closed up a few more basis points. The Russell 2000 & Transports closed down a bit more. 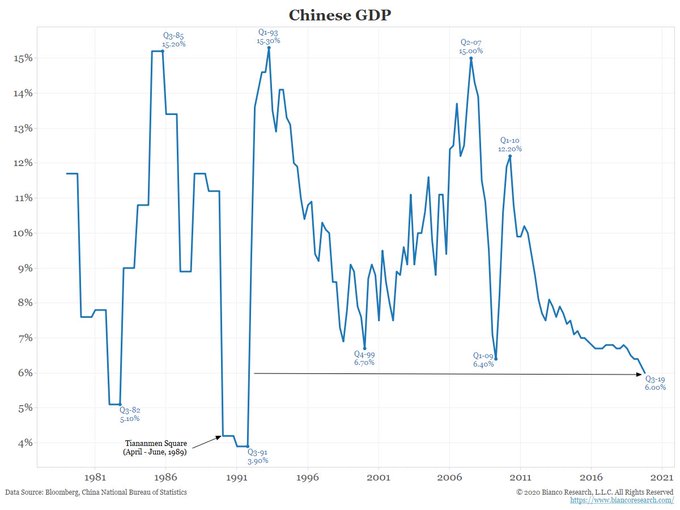 So we do expect China to keep their foot on the accelerator to stabilize their economy & to try to get some more growth. In contrast, we think the effects of Soleimani episode will be more transient & almost irrelevant to the US economy.

The bigger risk in the intermediate term will be withdrawal of the massive liquidity injected into markets by the Fed. A less than robust economy in Q1 might stay their hand in Q2 & then they will face the election.

In the meantime, the Santa Claus rally did materialize in fact:

Frankly, we can’t but feel somewhat impressed with the action in US stocks on Friday. After a very big decline over night, the day action seemed restrained. The sell-off into Friday’s close seemed mainly due to fears of what might happen over the weekend. Then after the close, we heard about another strike on leaders of a different Shia militia in Iraq.

It will be interesting to see how US stocks act on Monday. If we get no retaliation from Iran over the weekend and US stocks rally on Monday morning, then this episode may recede in the background at least until the next such episode. On the other hand, if US stocks continue their decline on Monday without any retaliation from Iran, then it might suggest a back step in the rally.

Given all that, we concur with the steady hand:

On the other hand, you see a different call from Tom McClellan: 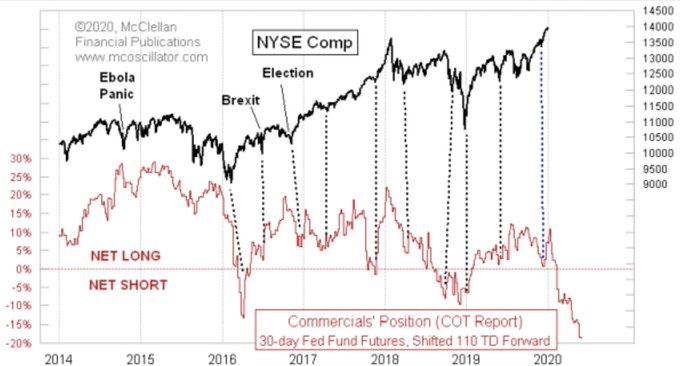 Gold rallied 2.4% this week & reached some old highs. But Gold miners underperformed Gold. Oil rallied 2.2% on the week but, despite that rally, Oil stocks underperformed Oil. We would prefer to wait for next week rather than speculating on why in vain.

4. What follows the “first ever” decade?

Hmmm; what makes the 2010s the first decade ever?