1.Move aside Fed, here is NFP

For weeks we have seen Treasury rates & the Dollar decline relentlessly & Gold go up relentlessly. Two week ago we wondered whether Fed Chairman Powell would say or do something that would at least tentatively reverse these. We were wrong. Powell couldn’t even nudge these movements.

He can rest easy because Friday’s Non-Farm Payroll report did the job for him. Dollar went up 64 bps on Friday; Rates rose across the Treasury Curve; TLT fell by a point and Gold fell by over $25 or by 1.25%. 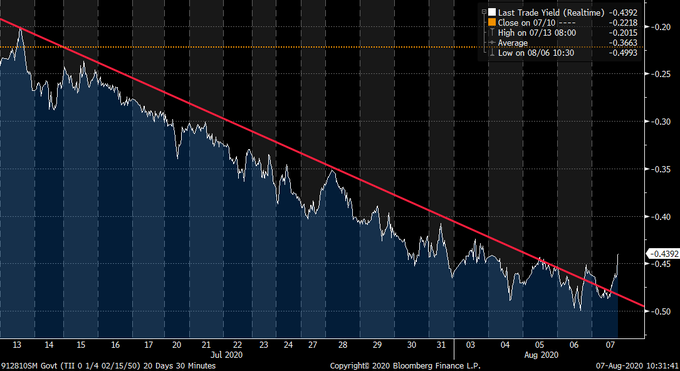 What about a chart of the U.S. Dollar? 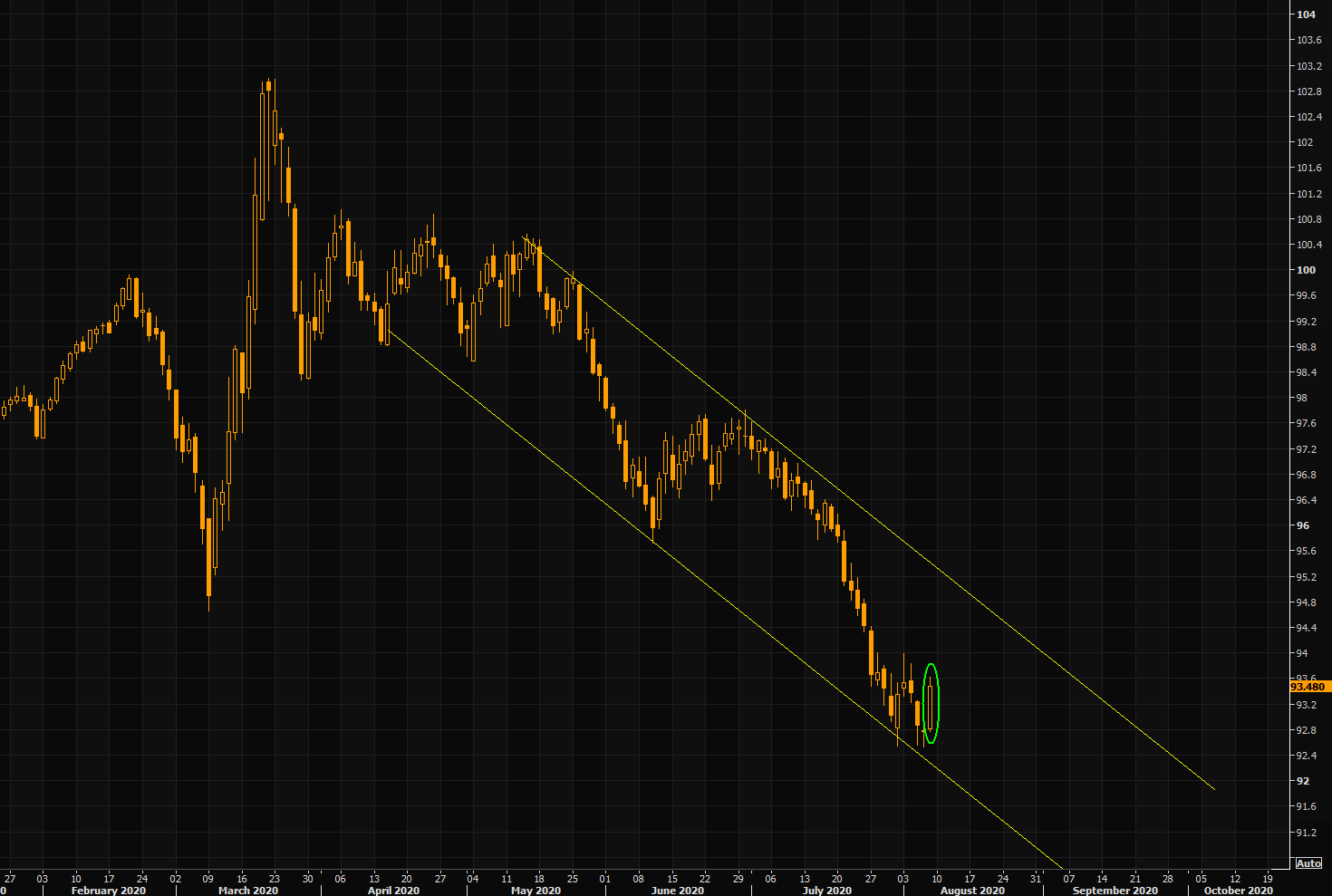 Any one actually close their Dollar shorts?

No wonder Gold fell by $25 on Friday & Copper by 4%. Remember what Carley Garner, colleague of Jim Cramer, said in last week’s clip? That Gold rally would stop if the Dollar rallied! Last week, Carter Worth of CNBC Options Action pronounced that gold “is getting a bit crowded“. And this Friday,

The two main charts in the above article are:

Something else happened on Friday that may suggest at least a tactical regime reversal if not a regime change. The Equal Weighted S&P 500 was up 1% on Friday while the regular, or cap-weighted S&P, was barely up by 6 bps. And QQQ was down 1.1% while Russell 2000 was up 1.6% with IWC, the micro-cap ETF, up 1.8%.

Doesn’t all this suggest a strengthening of the belief in the economic recovery?

What was the reaction from the smart ones?

Another way to put this,

Did Rick Rieder really say “improving manufacturing“? Was he dreaming or did he see the same number than Rich Bernstein saw? 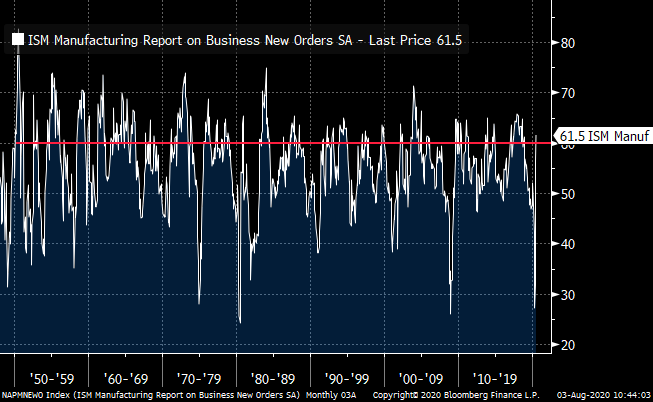 All day on Friday we saw the Congressional circus about the stimulus bill. Markets watched but didn’t care a great deal because they expected President Trump to announce he will do what he needs to do via Executive Orders. The markets were proven right. President Trump signed 4 executive orders on Saturday that cover

We have been proponents of a payroll tax holiday since the beginning of the year. So we are delighted to see the President take the bold step of ordering it & daring the Democrats in Congress to sue him to stop that. We are also happy to see Guggenheim’s Scott Minerd write on Friday Give Trump His Payroll Tax Cut. It’s Good for America. Specifically, he wrote:

We think Mr. Minerd has been wrong on many points this year, especially on his becoming the voice of “the end is near” type prediction for the American economy and markets. But he is totally correct on his stance on the payroll tax holiday. Kudos to him for speaking out so candidly.

We all know that when US Dollar liquidity tightens, it is a bond bullish signal. And how does that happen these days? When Fed’s purchases are lower than the issuance of Treasuries. That is the message of the chart below from Nordea’ Andreas Steno Larsen:

Chart 5: If the Fed is “out-issued” by the US Treasury it empirically leads to lower long bond yields 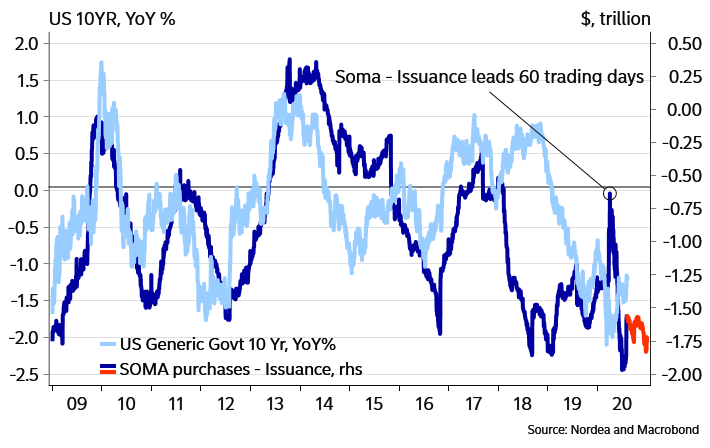 Is that why the Treasury put forth its low estimate for Q3 this week? Again a chart from Nordea:

Chart 4: US Treasury again expects to bring the cash balance down to USD 800bn … but we doubt it. 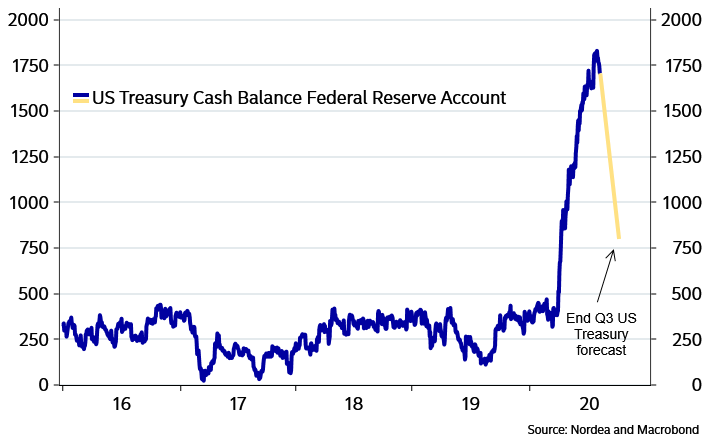 If they do so, Nordea says “the commercial USD banks will be flushed with liquidity, which is usually a pretty positive signal for markets.”

The Treasury curve rose in yield for the first time in 5 weeks. And it steepened a bit with the 30-year yield up 3 bps while the 5-year yield only rallied by 2 bps. The Treasury ETF, TLT, declined by 63 bps. Will this continue next week & beyond or was this a one-week wonder?

We asked last week whether the 45 handle up move in the S&P was real or merely month-end.  Then we quoted last Friday afternoon’s tweet of Bob Lang

Does this mean that the consolidation going on in the stock market has ended? Morgan Stanley’s Mike Wilson predicted on BTV last week that it would end with the passage of the fiscal stimulus bill. Well, the actual bill may not have passed, but the markets knew President Trump was going to launch his fiscal stimulus via executive order. Wilson had also predicted that the equal-weight S&P will outperform cap-weighted S&P with the passage of the fiscal stimulus bill. That was not true for the week but on Friday, the equal-weighted S&P outperformed the S&P by 1%.

Back on July 14, Jim Cramer had reported that the legendary Larry Williams was predicting that the S&P would rally to 3346-3348 or to near a new high by the week of July 27 & then decline. The S&P has indeed rallied to 3351 but two weeks after the target date of Larry Williams. That raises a question – should we then also push back the start of the decline by two weeks? That would mean the S&P will start to decline sometime next week.

Another way of looking at this might be that with President Trump signing his Executive Orders, all the expected good news will be in the markets next week. And both GS & JPM point out the S&P 500 is stretched here. A new high is only 50 handles or so away. So if all these gurus are correct, then we could get a new high on the S&P next week and then begin a decline.

We know that Mike Wilson has argued for a rotation into cyclical sectors & Tom Lee on Friday predicted a monster rally in stocks benefiting from a cyclical improvement in the economy. These are two smart guys who have been proven right and they could well be proven right again. But cyclical stocks have run up a lot & the sectors that have lagged are the traditional defensive sectors like staples & healthcare. Wouldn’t a rally in these sectors be consistent with how Rick Rieder & company think of Friday’s NFP number?

We heard this phrase from CNBC’s Melissa Lee on Friday afternoon and we literally could not believe our ears. An American anchor on an American TV network saying this on American air? Have we raised the ire of China or has China raised the ire of America with its haughtily arrogant & contemptuous actions?

We do realize that China has the capability to harm prominent American companies with huge market caps like Apple. But isn’t that a secondary concern given the state of affairs between China & USA? The U.S. Aircraft Carrier groups are showing the American flag by sailing through the South China Sea. That is not merely for America but for upholding the freedom of navigation in international waters for all countries. Does Melissa Lee think the U.S. Navy should not raise the ire of China by defending the freedom of navigation in global waters?

Melissa Lee is probably not alone at CNBC in feeling that President Trump should not “raise the ire of China“. That could cause a decline in the stock market and hurt the ratings of CNBC. But, to his credit, one CNBC anchor has been clear-eyed about the threat posed by China & has been explicit in his affirmation of the “we need to stand up to China stance” of the Trump Administration. He is Jim Cramer, one of the franchise players at CNBC & an old China-Bull from 2003-2006 at that. Kudos to him.

Speaking of Melissa Lee & China, what would her Fast Money show, especially her friend Guy Adami, say about the following? 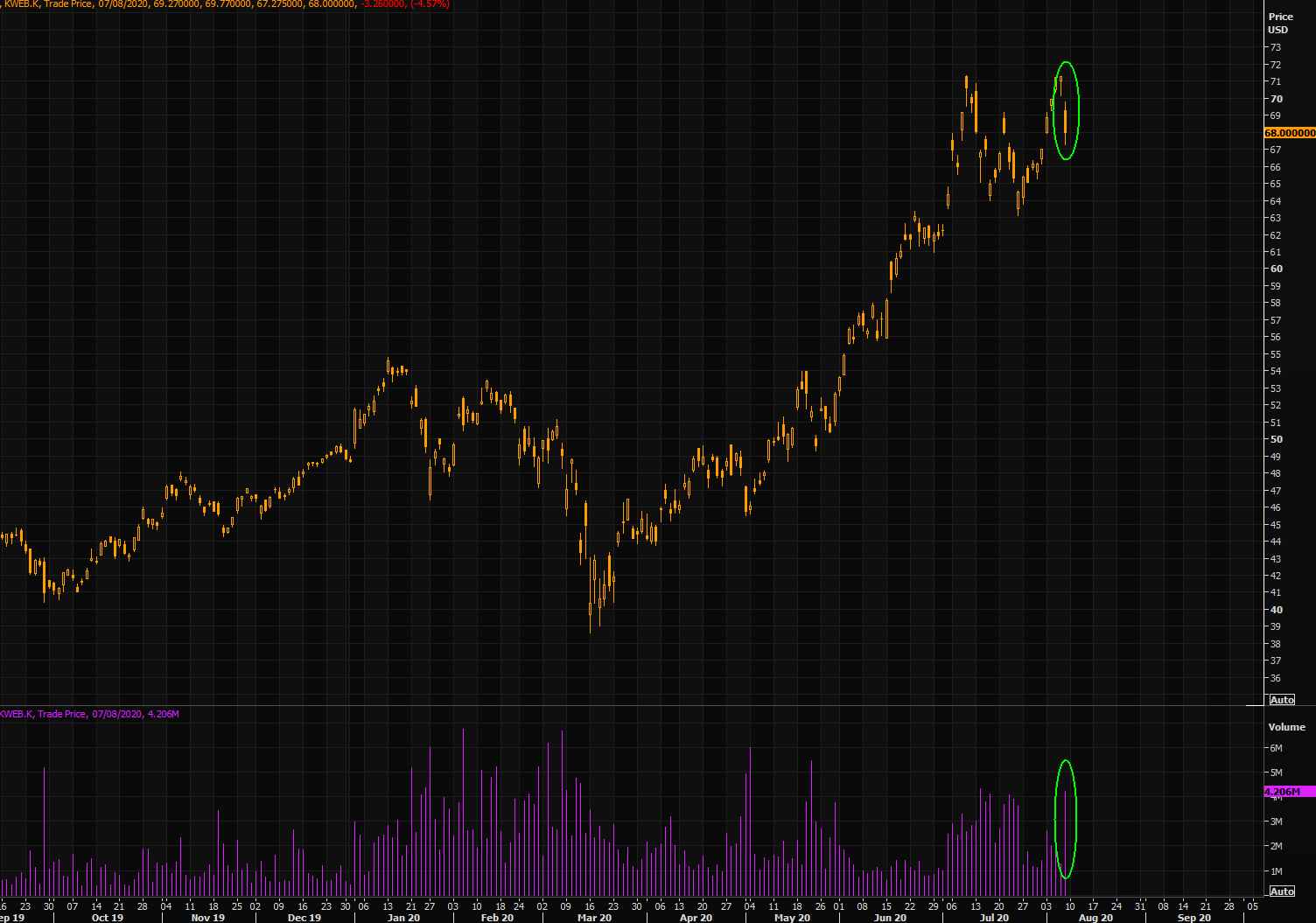 6. Old Parable in Modern Reality? The Arab & the Camel

On a different scale, how many remember China coercing Tajikistan in 2011 into giving up 1,000 sq. km of land to resolve their border dispute? That was only 5% of Tajikistan & very few focused on it despite its location next to the Wakhan Corridor. We did because we felt it was a long-term move towards Af-Kash-Bet. Now it looks like it was the classical Camel asking to put his head inside the Arab’s warm tent.

Guess what China did this week, nine years after seizing the first foothold inside Tajikistan ? Chinese Media, via a Chinese historian, has begun to claim 45% of Tajikistan as old Chinese land (from 5% in January 2011 to 45% in August 2020) that was taken away from China. This 45% of Tajikistan is the Pamir mountain region that sits on top of the Wakhan Corridor & is adjacent to Afghanistan’s Badakshan province. And China has already established a military “training” base in Badakhshan province.

Those interested in this new version of the Great Game should read, or at least look at the maps in, our adjacent article – Af-Kash-Bet via Tajikistan by China – 5% in 2011 to 45% in 2020. Remember there are two versions of how the Arab & the Camel story ends. One says the Camel finally pushed out the Arab from the tent and the other says the Arab got angry & pushed the Camel out. In this case, Tajikistan, today’s Arab, doesn’t have the power throw out China from Tajikistan, at least not without real & determined help from Russia.

7. What has really raised the ire of China?

You may agree or disagree but it makes an interesting watch. And it infuriated the Chinese Embassy in India. They called the Editor & Founder of StratNewsGlobal and threatened “real & serious consequences” if this video is not deleted. Naturally, the Editor said deleting it was out of the question but they would publish any response the Chinese Embassy would send them.

Then Strat News published another video titled Chinese Embassy Threatens StratNews Global detailing what the Chinese spokeswoman had said verbally to the Editor. Naturally, the Chinese threat made the first video go semi-viral.