During the past few weeks we have argued that a global Anti-Indian (Hindu) campaign is in full force. The goal of this campaign is to defame & “cancel” all elements of the Indian Ethos with a longer term goal of a regime change in India by replacing the Modi Government with a form of Sonia Gandhi type foreign-dictated anti-Hindu government in India.

Look at the chain of actions in the past few weeks:

This was done while horrific hate-filled violence was launched against Asian Americans in multiple American cities. Kudos to President Biden & his team for the absolutely clear condemnation of this violence by President Biden.

We are also convinced that President Biden and his two esteemed Secretaries, Blinken & Austin, are against the above anti-Indian (Hindu) campaign by elements of the Democrat party. In fact, we believe the above Anti-Indian campaign is partly being waged to force the Biden Administration to pull back from the Indo-Pacific & the US-India partnership.

While all this was going on in America, the Anti-Indian (Hindu) campaign struck in Oxford University in the UK. And they struck in the stupidest way possible, at least from a campaign effectiveness angle.

1. Cruel & Abusive Bullying of an Indian (Hindu) Student leader at & by Oxford

The facts seem clear. Ms. Rashmi Samant, a student from India, was elected as the 1st Female Indian President of the Oxford Student Union with a clear majority. Soon after the election, a virulent campaign  was launched by a couple of Oxford Societies against President-elect Samant. Among other things, she was accused of a “Hindutva Narrative”. The cyber-bullying & abuse became so intense that she resigned & fled back to India.

This lit a fire in Indian groups who accused Oxford of repeated “cancel” type of harassment & boycotts of Indian speakers & a persistent pattern of anti-Indian bigotry. More importantly, it led to a firestorm in India.

Unlike the US cases, this case specifically was about a Indian citizen student who had gone to Oxford to study for a Master’s Degree. The fact that she had to leave the UK & return to India because of race-religion bigotry made it an issue for the Indian media.

Listen to Ms. Samant explain the extent of the cyber-bullying against her, her friends & against her “Hindu” parents in the clip above. Then listen to Mr. Satish Sharma, a Indian Activist in London, explain the pattern of vicious bigoted anti-Hindu actions at & by Oxford (from 8:11 minute onwards).

Following a complaint by Mr. Sharma of “religious hatred, bullying and harassment”, the British Police have reportedly filed a case against an Oxford University faculty member in connection with the case.

The fact that a citizen of India was subjected to such abusive cyber-bullying & compelled to return to India made it an issue for Indian Government as well. A question was asked in the Upper House of the Indian Parliament about the treatment of Ms. Samant to which Mr. Jaishanker, India’s External Affairs Minister, responded in the Parliament. Read & listen to Mr. Jaishanker’s response:

Mr. Jaishanker’s tone was soft but his words were not, especially about the “reputational impact” on the UK.

Note this happened within a couple of weeks of the British Government expressing its desire to join the Quad after President Biden’s Quad summit. So while this Oxford bigotry doesn’t directly affect the USA & Biden Administration, the “reputational impact” of Britain’s obvious & pervasive anti-Indian bigotry may have a bearing on US views about the desirability of Britain joining the already sensitive Quad group.

It also shows that high profile executive appointments of Indians (Hindus) in the British Government can happen side by side with deep seated & pervasive anti-Indian colonial racial & religious bigotry against Indians (Hindus).

That is sadly similar to the virulent bigotry against Indian (Hindu) Ethos practiced in Democrat strongholds like New York Senate & Chicago City Council despite the large number of Indian-American appointments in & by the Biden Administration.

We find it interesting that the UK Police launched an investigation into the complaint against Oxford’s cyber-bullying on March 23, 2021 and two days later on March 25, 2021, the anti-Svastik NY Senate  Bill S2727 was declared Stricken. We know how much effort & passion was put in against this NYS Bill by Indian (Hindu) Americans in the New York area and our “interesting” comment does not take away even an iota of our admiration for their efforts. But, to paraphrase Napoleon, good luck is always to be welcomed.

On the other hand, we have sincere respect for the political awareness & acumen of Senator Schumer. And we just don’t think he would have wanted a conflagration about Anti-Hindu bigotry in his own New York State a mere two days after the UK, America’s deepest ally, began an investigation of anti-Hindu bigotry in Oxford.

We urge everyone to read the Atlantic Charter, the statement jointly issued on 14 August, 1941 by the great President Francis D. Roosevelt & Winston Churchill. The charter set out the post-WWII American and British goals for the world. 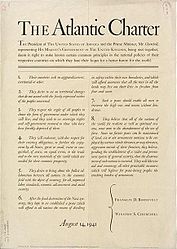 FDR considered British colonies, including India, to be just like colonies of Britain in pre-1776 America. That is reflected in the above Atlantic Charter, a 100% FDR document. Churchill signed it only because he had no choice. Unfortunately the Atlantic Charter was ignored by President Truman after FDR’s death in 1945. And Churchill’s Brit-Nazi doctrine prevailed.

Ask yourselves, who is the best authority on what is “Nazi” ideology and what isn’t? Adolf Hitler, we say! What was his view of Britain? As he told a student body in Munich, Germany in 1930 –  “Racial superiority entitled the British to the possession of India,”. Two years later, Hitler expounded on his blueprint again citing the example of British in India as his inspiration:

See, Adolf Hitler himself saw British rule in India as his ideal upon which he established his policy. So if Hitler’s policy is called NAZI, then his ideal by definition becomes NAZI.

Seriously folks, read the book below by Nick Robins, a British Fund Manager in London, to get a sense of how actually NAZI the British colonial occupation was. 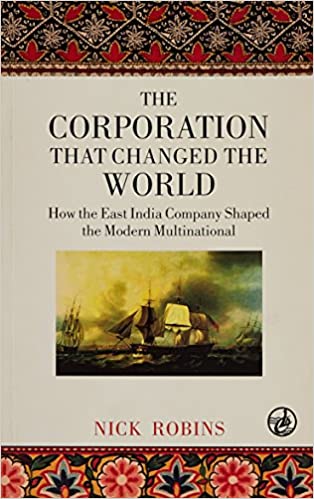 By the way, the early thinkers in Britain like Adam Smith, Edmund Burke abhorred the British East India Company, the entity that plundered India. Karl Marx was particularly sickened by it writing “the misery inflicted by the British in Hindostan is of an essentially different and infinitely more intensive kind than all of Hindostan had to suffer before“.

See, the early British used the same term “Hindostan” that the Mughals (& the Arab-Iranians) used to describe India. And why shouldn’t they? The original Sanskrut term was Sapta-Sindhu or the land of seven rivers and Sapta-Sindhav for the people. The Persians converted these to Hapta-Hindu for the region & Hapta-Hindav for the people. Slowly the Sapta (seven) was dropped and the nomenclature became Sanskrut Sindhu & Persian Hindu.

Then came the Greeks in the days of Herodotus & used the name Indus for Sindhu and Indica for the region. The Romans kept the Indus & termed the land as India. So the names Sindhu-Sindhav, Hindu-Hindav & Indus-Indian are different versions of the same names and there is no difference between Hindu & Indian.

Fast forward to the British Rule in 1857 after the near-loss of Indian territories by Britain in that war against joint Hindu-Muslim forces. It was a close thing and the British dropped all plans to convert Indians into Christians after that war. They realized that their success in ruling India depended on their ability to minimize the pride in India & to divide the people along religious conflict.

Remember the “Mughals” were Timurid-Mongols, joint descendants of Chagatai Khan, son of Genghis Khan, and of Timur, or Tamarlane as he is called in the west. The Mughals NEVER considered themselves as local to India or Hindostan as they called it. In their caste system, the Muslims with Turkish origins were the highest and the Muslims with Iranian origins were the most cultured. To them, Hindostan or India was to be ruled and ruled only.

With this as a start, the British laboriously & quite brilliantly built a chasm between what they began calling “Hindu” and “Indian”, the latter term they used to describe non-“Hindu” occupants of India. This British-created divide between Hindu & Indian paid off handsomely for the British in their plans to partition India along religious lines.

Remember the American colonies got their independence from Britain by fighting & winning a brutal war. Mao’s China got its independence by fighting & winning a brutal war. In stark contrast, Indians never fought hard for their independence. The British essentially walked out of India because it was getting too difficult & too expensive to rule. But, while leaving, they divided India into two parts along religious majority lines & weakened it.

And they left a dedicated Brit-servile man called Jawaharlal Nehru to run India by getting Mahatma Gandhi’s concurrence. As a result, all the crafty divisions created by the British were incorporated into Nehru’s physically free but mentally enslaved India. Among those was the false & disgusting “Hindu” vs, “Indian” distinction.

And that is what bedevils Indians to this day in their fight against religious bigotry & hate whether at Oxford or at Rutgers. And that is the cudgel used by the Anti-India cabal to attack Prime Minister Modi.

Thanks to the Brits & their servile BrIndians, the word “Hindu” has become both a diminution and a term of contempt. It is used as the N-word was previously  used to diminish & ridicule African Blacks.

Indians don’t seem to realize that once they are described as “Hindu”, they only become part-Indian & not wholly Indian. Why can’t they shake off that Persian diminutive “Hindu” and use the whole & original Sanskrut term Sindhu or Sindhav or even Indian? Don’t they understand the hated secular label derives from this artificial & false distinction between “Hindu” and Indian?

No sadly, they don’t. That is why they keep fighting the same battle year after year from this University to that University. Look how many battles the Indian Activists have fought just in the last 3 weeks – NY Senate, Rutgers, Chicago, Oxford, the MilanV article in Foreign Affairs. And all these revolve around the false & falsely created distinction between “Hindu” & Indian.

We think the Oxford bigotry is a great opportunity to organize around the central enemy, the Brit-Nazi thought regime. That links both Oxford, Rutgers, NY Senate & Chicago all into a common battle against Brit-Nazism.

Two of the three evils of World War II have been forced to apologize for their inhuman & thoroughly evil behavior – Nazi Germany and Imperial Japan. The only one who has not is Colonial Brit-Nazi Britain. It is time, we think, to compel today’s Britain to admit & apologize for their Nazi-like crimes in India, Africa and other parts of Asia.

And it is important for Indian-Americans to begin this struggle in America, the land of the Great FDR – the one man who understood the evils of Churchill’s Britain & tried to end it.

Shouldn’t we all take an oath to fight the Brit-Nazi “Hindu vs. Indian” labeling on this year’s Holika Dahan, the burning of the evil Holika and the victory of Good over Evil? Our personal answer is Yes,