When a stock, sector or index falls below a key support, technicians call it a breakdown. That is a serious condition & one that suggests the beginning of a serious down move. But sometimes the break below support gets reversed very quickly and the stock/sector/index rises above the previous support line. Such a false breakdown is deemed bullish & often results in a powerful up move leaving those who sold or shorted looking stupid & feeling poor.

Tom DeMark is a highly respected market analyst & his DeMark counts are studied & followed by many major investors. Just last week Jim Cramer highlighted DeMark’s warning of a Sequential 13 count and said a major top in the S&P 500 & QQQ might be likely.

In this case, DeMark’s “13” count did hit on Thursday, August 4, two days after the Jim Cramer clip. But it seemed to have resulted in a “recycled count”, analogous to a failed breakdown. So said Tom Lee on Wednesday August 11 on CNBC Half Time Report:

We know what happens to the shorts when a failed breakdown reverses into a rally? Is that sort of pressure possible here? Without our asking, Tom Lee said:

Speaking of a “larger trend underway” that might actually be pushing in a rally direction, 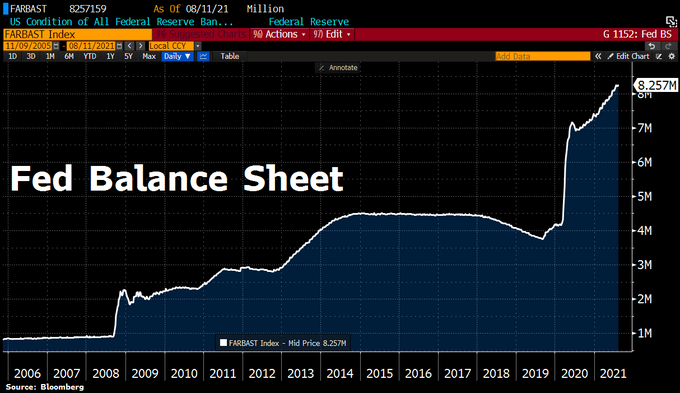 Something else happened this week, something that happens very rarely. By closing up on Friday, the S&P made 4 consecutive highs this week. How rare is this?

While one for the record books, the week was fairly quiet. The Dow was up 87 bps, the S&P up 70 bps. But the Nasdaq 100 or QQQ was up 2%. Transports were up 3.9% and Money center banks were terrific until Thursday.

And our favorite VIX  was down 4.3% to 15.45 leading Lawrence McMillan to write on Friday:

Yeah, but all that is macro stuff. What about the companies? Here you can see & hear the wonderment in the voice & gestures of BlackRock’s Rick Rieder on Tuesday, August 10 on CNBC Half Time Report – “amount of cash companies are sitting on in unbelievable“. He added that we are going to see significant Cap-Ex, M&A is going to be heavy … and said he is actually increasing his exposure by selling puts in companies that are experiencing high volatility on news. Hear him yourselves:

The only negative note Rieder struck was his insistence that the Fed taper soon to reduce the liquidity in the system. Sorry Signor Rieder, you spoke too soon, 3 days soon before Friday.

Think back to Friday, August 6. Treasury rates had fallen from Monday to Thursday of that week only to explode higher by 8 bps or so on that Friday. That was because the Non Farm Payroll shook everybody up with its unexpected strength (or perceived strength if you are a Rosie disciple).

That positive shock carried through this week with rates up from Monday to Thursday. Then came the shockingly bad Consumer Sentiment figures on Friday, August 13. And Treasury rates fell off a cliff: 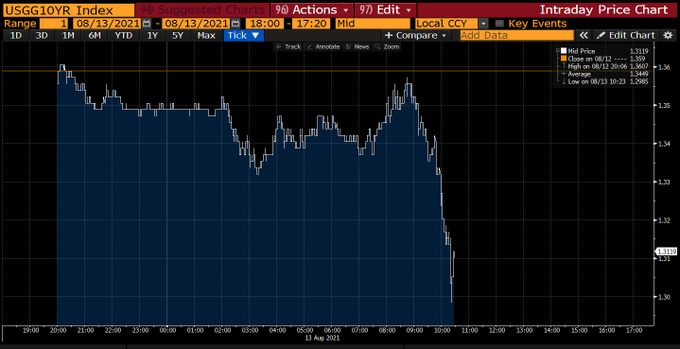 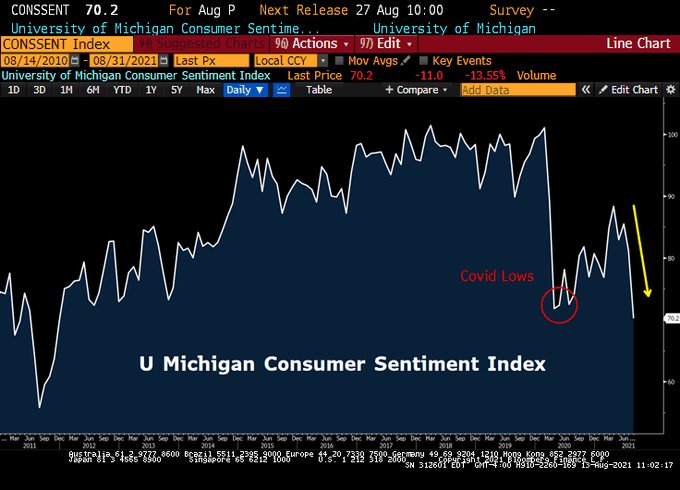 No one asked Rick Rieder on this Friday whether he still wants the Fed to taper soon. But history seems clear: 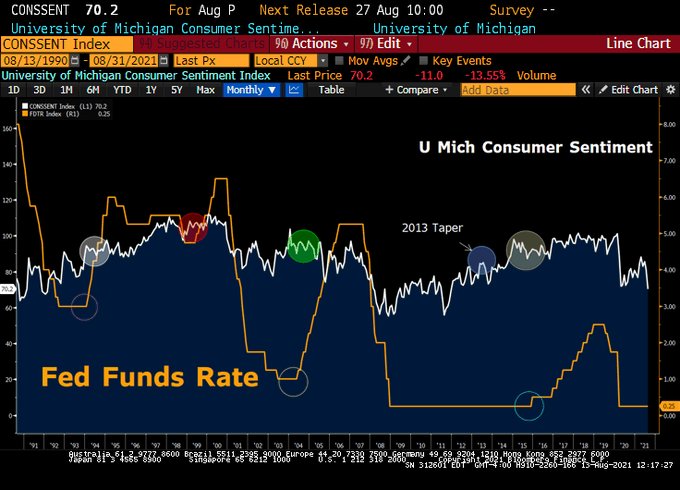 Guess who was on the other side of Rick Rieder about the money boom and that too one day ahead of Rieder?

We are not making fun of Rick Rieder about his “Fed must taper now” call. To our simplistic way of thinking, both Rick Rieder & David Rosenberg are right.

Rieder is speaking about the economy that companies are seeing, the economy in which corporate credit is as healthy as we remember. We heard this week on Fin TV (from BTV’s Lisa Abramowicz if forced to guess) that a Cruise liner company recently raised debt at 5% to repay the debt they had raised last year at 11%. When they see this, credit managers have to get eloquent about the economy.

On the other hand, Rosenberg is presumably speaking about the middle class whose increasing plight can be seen from below: 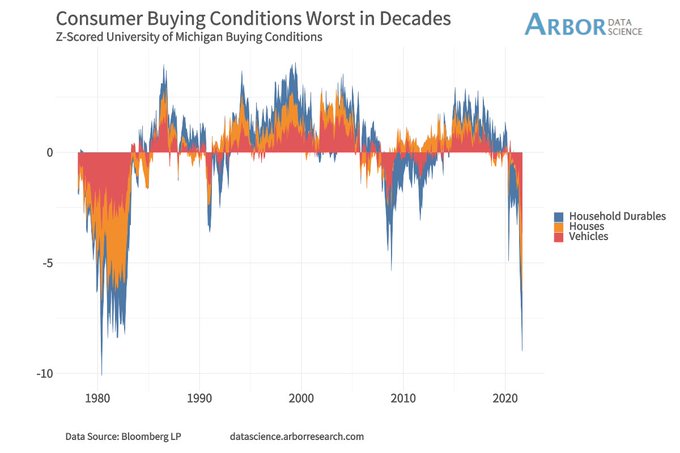 3. How about reversing the sequence?

All the smart folks say on Fin TV that the Fed should taper first & then may be in 2023 raise rates. If that remains the case, what might the chart below look like next year? 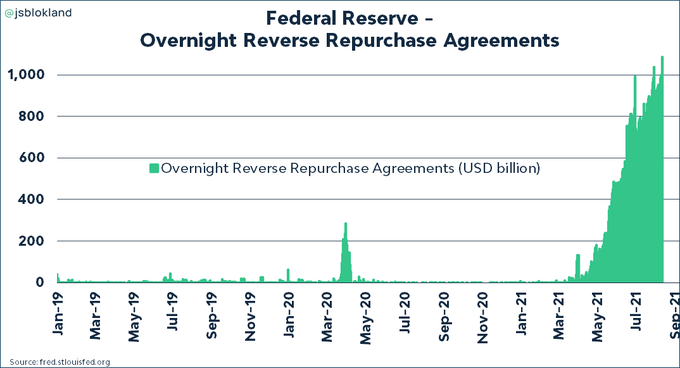 So why not raise federal funds rates by 25-50 bps now and BEFORE tapering. In fact, it might make sense to raise federal funds rate to 50 bps AND increase the taper to $150 billion a month. Everyone tells us that QE is the key to keeping markets happy & up while raising rates to 50 bps might add some income to savers and reduce this madness of zero% reverse repo at the Fed.

As we said above, the positive NFP surprise on Friday August 6 made Treasury yields rise from Monday to Thursday of this week. Will the stunningly negative sentiment surprise lead Treasury yields lower next week?

As it happens, the 10-year hit the upper end of its trading band on this Thursday & promptly reversed on Friday. That made Carter Worth, resident technician at CNBC FM-OA, bullish on TLT and on QQQ.

And any one who bought Wednesday’s 10-year Treasury auction or even Thursday’s lukewarm 30-year auction must feel like celebrating this weekend. The big question is whether Powell will celebrate soon. 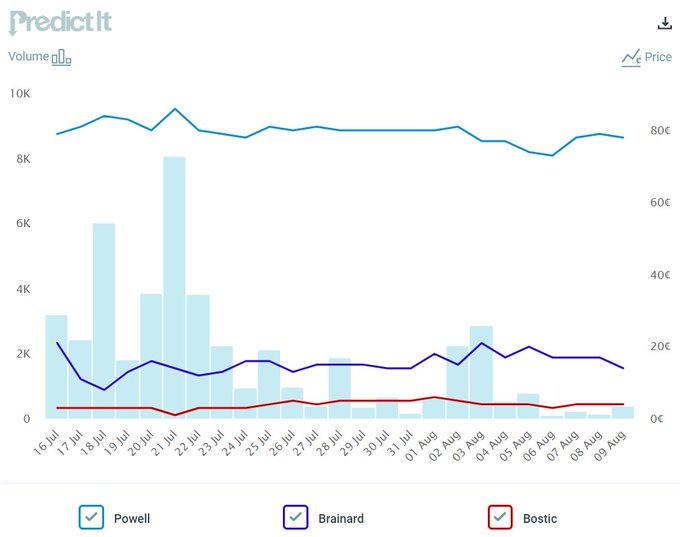 Best wishes to Indian-origin people around the world & holders of Indian stocks for a Happy Independence Day on August 15.