We ended our article of last week with:

The “that” in the above quote was our view (expressed last week) of an “emerging divergence” in what was a clean & simple Ukraine story.

The panic re Ukraine did lessen this week & we saw TV coverage shift to other stories. Even the Ukraine focus seemed to shift from escalation to negotiations between Ukraine & Russia. And that was bullish for the stock markets. Look what Anastasia Amoroso of iCapital wrote in her article:

Just look at the following 5-day charts of S&P, NDX, TLT & DXY to see for yourselves what happened on Wednesday at around 2;35 pm:

Going from last but not the least, DXY, the U.S. Dollar ETF, fell 76 bps on Wednesday, a vote for easing of financial conditions going forward. And stocks reacted as horses do when the gate is opened at Kentucky Derby.  As the top 2 charts above show, stocks had fallen after the release of the FOMC statement at 2pm on Wednesday. But when Maestro Powell began speaking & especially when his “nimble” posture became visible, stocks took off & didn’t stop till the close on Friday.

How terrific was this week?

Our “terrific” term seems so ho-hum compared to: 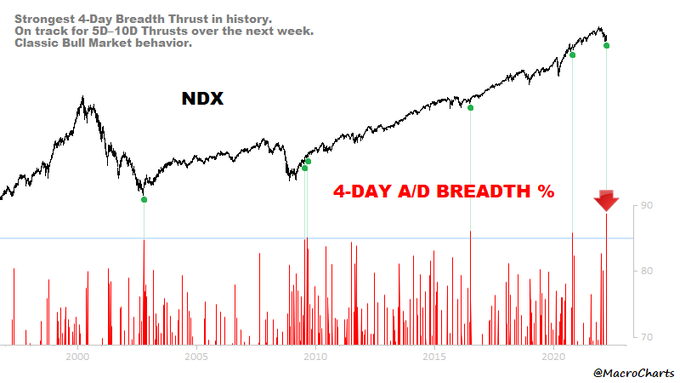 In their prior tweet on Friday, @MacroCharts had stated that such a breadth thrust had “never happened in 2000/2007 bear markets“.

The sample size is small but the track record of what follows seems bullish:

The above is fine but we give greater credit to one who was correctly bullish on Monday, the day when selling was intense & they used a different calendar factor: 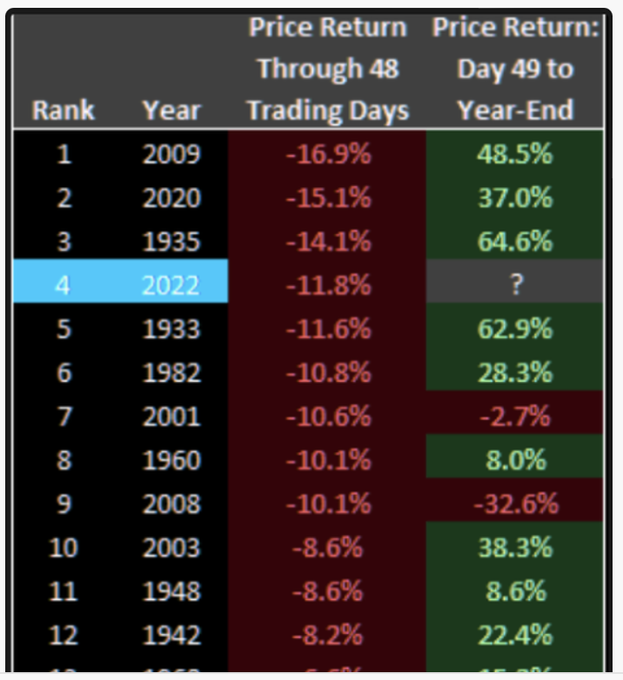 And another indicator provides the same message: 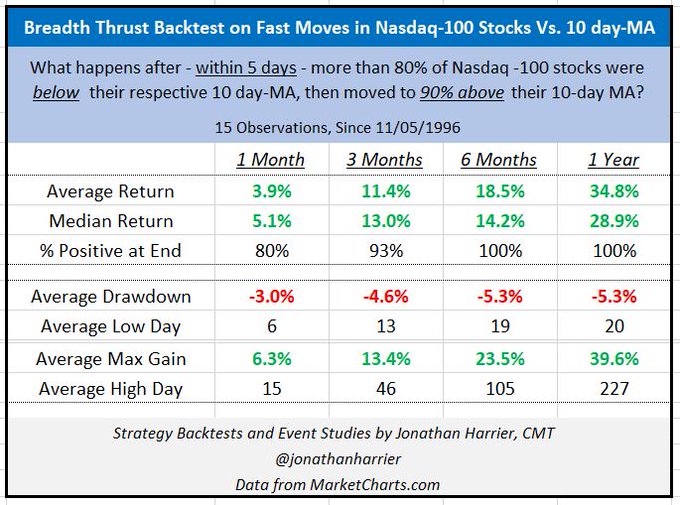 Wouldn’t it be ironic if after the same message from these different thrust indicators, the stock market actually declines next week? Just saying, not predicting!

This might have seemed scandalous to many before Wednesday. In fact, the cognoscenti have been uniform in trashing Treasuries all year & especially the 30-year Treasury bond. It took a brave investor  like Scott Minerd to say “rates are topping” on Monday, two days prior to the Maestro’s signal. And that signal proved people like Jeffrey Gundlach correct. Recall that Gundlach had recommended a 25% weighting of the 30-year Treasury bond in the Double Line Roundtable in January. And on Tuesday, the day before the Maestro’s signal, Mike Wilson of Morgan Stanley said that he “agrees with Minerd that rates are topping here” and said “long duration Treasuries are not a bad idea if you are worried about growth“.

In his extensive & definitive conversation with CNBC’s Scott Wapner, Jeffrey Gundlach pointed to the big message from the bond market – “30-year bond rallied today“. He followed up more sacrilegious comments like “long bond saw its peak last year“, “long-end is a reasonably safe place to be“, “investors should own 30-yr bond because they will do well during turnover in economy” etc.

If that is not enough, technician Mark Newton of Fundstrat said the following around 5:25 am on pre-Maestro Wednesday morning to CNBC’s Dominic Chu:

Gundlach also added that it makes sense for investors to replace cash by 2-year Treasury because he thinks the entire Treasury curve will peak around 2.5%.

No wonder Gundlach was positive towards Nasdaq stocks in the short run. What sensible investor would not be when 30-year Treasury yields are flattish to down, when VIX is felling from 35 to sub-24 by weekend & when the Maestro has promised to be “nimble”?

But which Nasdaq or growth stocks should one consider for a rally from here? The veteran duo of Larry Williams & Jim Cramer discussed 3 names on Friday’s Mad Money show.

We suggest reading the linked article to understand the charts of Larry Williams & why he thinks GOOGL, AMZN & KO should rally from here.

What about DeMark you ask? 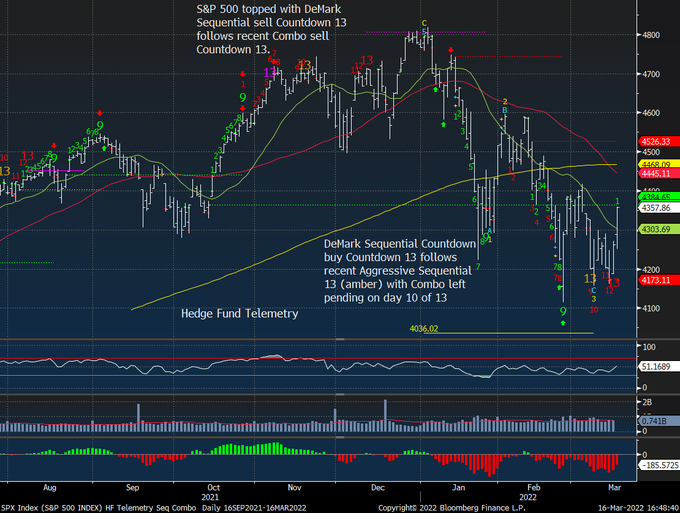 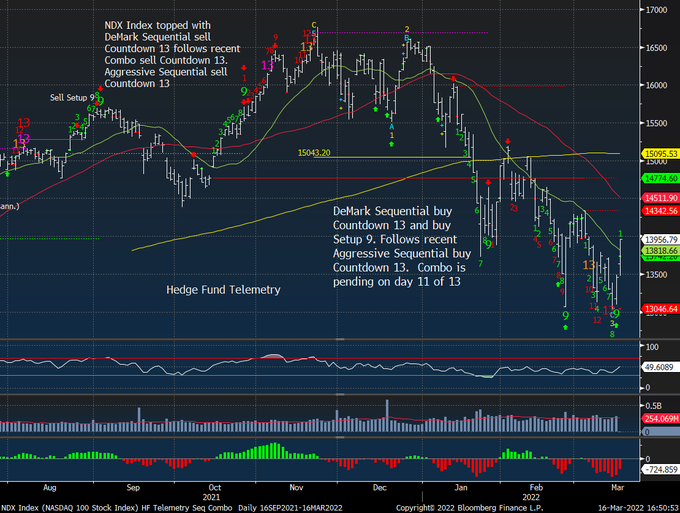 Guess this negated the death-cross in the S&P on Monday?

But what about corporate credit? Gundlach pointed out that yields in corporate bond market (investment grade) have gone up faster than in Treasuries & balance sheets are better. Specifically he said LQD has duration of 10, higher than that of 10-year Treasury. So “its ok to move into such areas“.

We are not saying that the Ukraine crisis is over. Just that the markets will be less concerned as long as the “war” remains within Ukraine without much fallout outside into Europe. The Chinese response to the pressure from President Biden also seemed calculated to keep the temperature down.