1.”It’s wrong time to raise rates, but they shouldn’t be at zero“

succinct, simple & so Santellian. That is essentially what Chair Yellen seems to think and, frankly, what the entire investing world thinks. That is why the reaction was instantaneous: 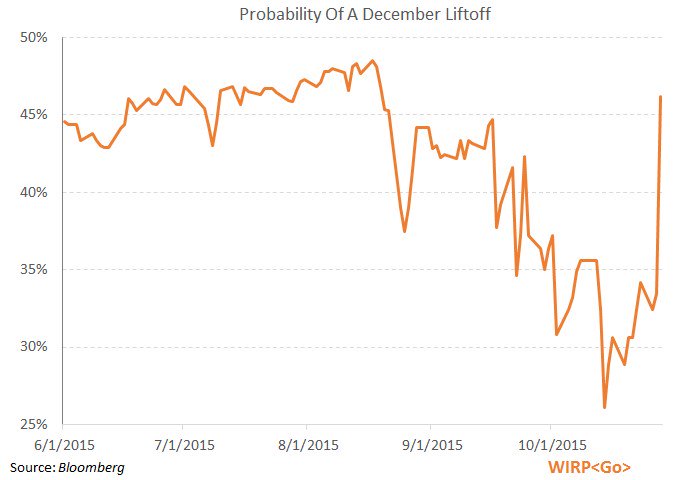 The 2-year yield agrees. But very few think this is a beginning of a series of rate hikes.

A few weeks ago, we opined that the Yellen Fed will pull a 2013 – meaning announce in October that they will move in December. Bernanke did that in October 2013 with the taper & Yellen did that this week. And this was a perfect time to do so. This past month has been the best month for the S&P in four years and the best month for the DAX since 2009. The economy is expected to grow at 2.5% in Q4 according to the Atlanta Fed & the Q3 GDP came in a little stronger than expected. So what’s not to like?

The reaction in the stock market, of course. But,

It was October 2000 and Goldman’s Abby Joseph Cohen was on CNBC talking positively about the seasonal Q4 rally. She said you always have a rally in Q4 unless you face deflation. That is why November of 2007 was a bad month for the stock market after Bernanke Fed issued a more hawkish than expected statement on October 30, 2007. But that is also why every year after 2008 has provided a stock rally in the fourth quarter.

So the big question is whether we have deflation ahead and, more importantly, will the Yellen/Draghi/Kuroda/PBOC cabal allow deflation to set in?

This is what the stock market thought and that is why after giving up all the pre-FOMC rally and going negative, it pulled another October 2 type turn on a dime and rocketed upwards to levels depicted below, courtesy of NorthmanTrader.com:

The most extreme daily MACD readings since the year 2000:

This brings us to the most important factor that governs stocks in Q4 – Performance fees. This year has been  disappointing or ugly for the majority of folks who get paid via performance fees. Do they take advantage of any decline in an overbought, extended market to run & gun into year-end?

Tony Dwyer expressed the old Abby Joseph Cohen caveat this week by saying its a binary decision – if you believe there is no recession ahead, then forget about a 3-4% decline that might happen. The model of Jeff Saut is calling for a trading top in the first three days of next week and then trading higher into year-end.

This is all fine but the next big determinant is next Friday’s jobs number. After all, the big worry isn’t December’s hike but the prospect of a series of rate hikes in 2016.

Treasuries nosedived on Wednesday afternoon and on Thursday. But the two days were different from a curvaceous point of view. Wednesday afternoon showed classic bear-flattening while Thursday was a bear-steepening thanks to better than expected economic data:

The reality is that Treasuries had become a consensus trade after the September FOMC meeting. When the FOMC turned this week, Treasuries turned too. 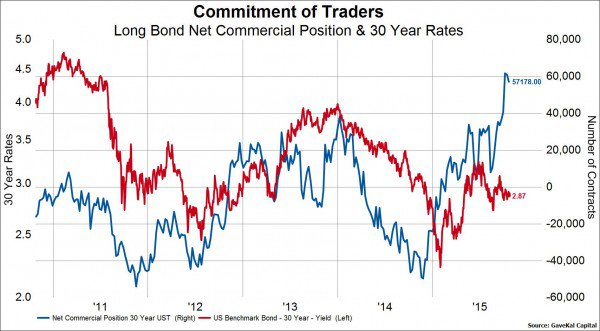 Next Friday looms large for Treasuries. If the jobs number bounces back, then Treasuries could face the double whammy of higher growth & a tightening Fed. That might recreate a 2013 Q4 type scenario and perhaps a buying opportunity into 2016 a la 2014. And if the payroll number echoes last month’s weakness, then we will fall back into will-they-won’t they discussion and into the trading range that Treasuries have been in this year.
4. Stocks – Seasonality uber alles?

The seasonality case is simple:

How touch and go is this? “$SPX. The arch held:” wrote NorthmanTrader.com

The magnitude of the S&P move can be seen from what happened to its inverse? 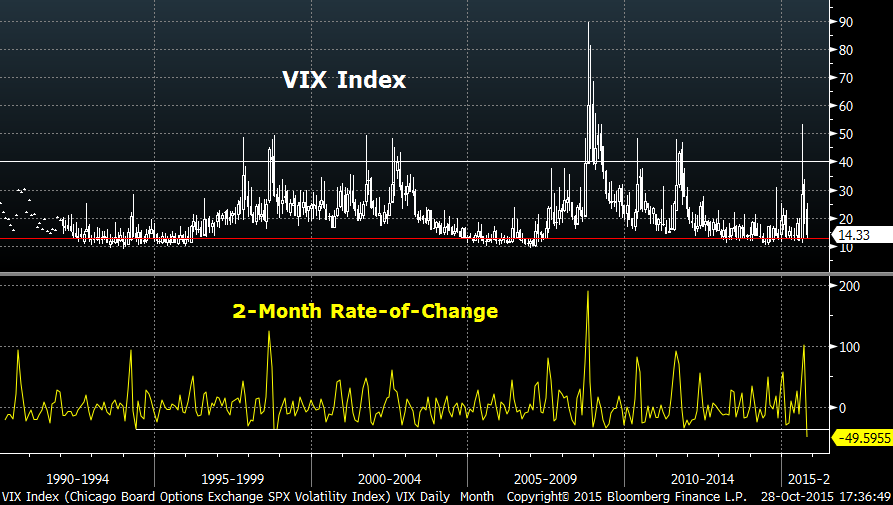 What else do you expect? We have never seen anything like today’s coordinated easing by the major central banks either. That is why a re-emerging divergence between Fed & ECB/BOJ is potentially dangerous. That is why the man from three-rivers who speaks of two-rivers scoffed at “paradime” comment of CNBC’s Kelly Evans.

Kelly Evans, especially today’s Britain-returned version, likes to use big words and highfalutin concepts while David Tepper likes to keep it simple. So does Carl Icahn and so do many of the smartest people in the world. Of course, had Tepper been a New Yorker like Icahn, he would have said “paradigm schmaradigm“.

Getting back to VIX, a chart from Mella_TA via NorthmanTrader.com: 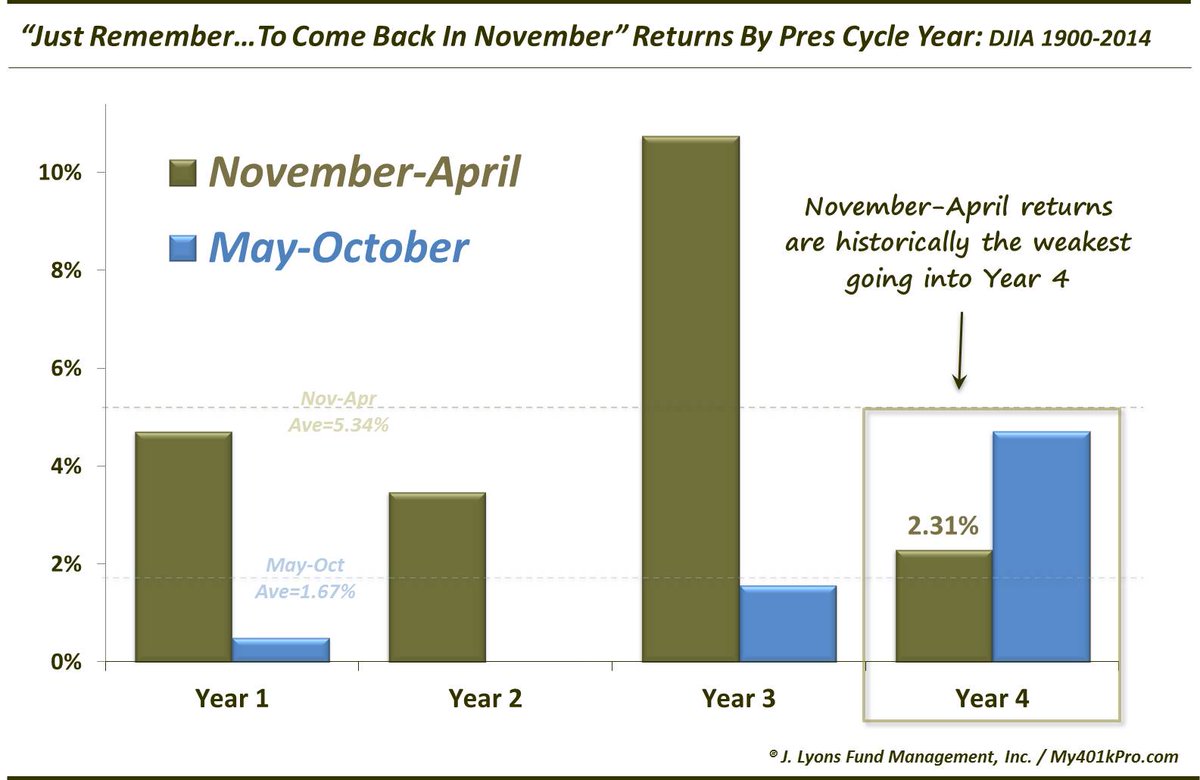 When the Fed turns hawkish, what should happen to Gold? Exactly what happened post FOMC this week. But is that a Top & trend change? Tom McClellan suggests so in his article COT Data For Gold At Topworthy Level.

Animals may & do kill their species-mates. But eat them? Rarely, very rarely. King Cobra is one such exception. Cool but how does this fit in an article titled WATCH: This Is How Indian Women Really Feel About Sexting? But then, we don’t get Huffington Post.
Send your feedback to editor@macroviewpoints.com Or @MacroViewpoints on Twitter