We have maintained that Iraq & Syria are merely one end of the Sunni jihad crescent with Afghanistan being the other end. As we wrote in our June 14, 2014 article Rinse & Repeat – Levant-i-Stan, what happens at one end usually is repeated at the other end. In that article, we described how the Afghanistan disaster was reborn in the Levant (Iraq-Syria). Today it is time to turn around and describe how the ISIL disaster in Iraq is being reborn in Afghanistan.

Remember the fall of Mosul? Remember how well-planned it was and how the Iraqi army, trained by America at great expense & with great effort, simply threw down its weapons and ran away. Now read what Vanda Felbab-Brown of Brookings wrote this week about the attack by Taleban on the important northern Afghani city of Kunduz:

Remember how destructive the fall of Mosul was to the morale of Iraq Government and its army? Compare that to:

Remember how the previous President Karzai was held out as the big problem in Afghanistan? Remember the optimism that greeted the new leader, Ashraf Ghani, a western-trained professional from the World Bank? How does Ms. Felbab-Brown describe the Ghani government now?

Frankly, this sounds worse than Iraq and it probably is. At least Iraq has had some tradition of governance for decades. Afghanistan has had none. The only reason Afghans were able to take Kunduz back was the intervention of the US air force & US military advisors. But for the 9,800 US troops in Afghanistan, Kunduz would have been irretrievably lost to the Taleban. But how much does this residual force buy us?

Buy us time? After 14 years in Afghanistan, we still need to buy time? What is Afghanistan, the “Anchor Baby” of US Foreign Policy?

Look at the map below of recent Taleban attacks in Afghanistan & weep. Because what you see below is happening despite the presence of 9,800 US troops. 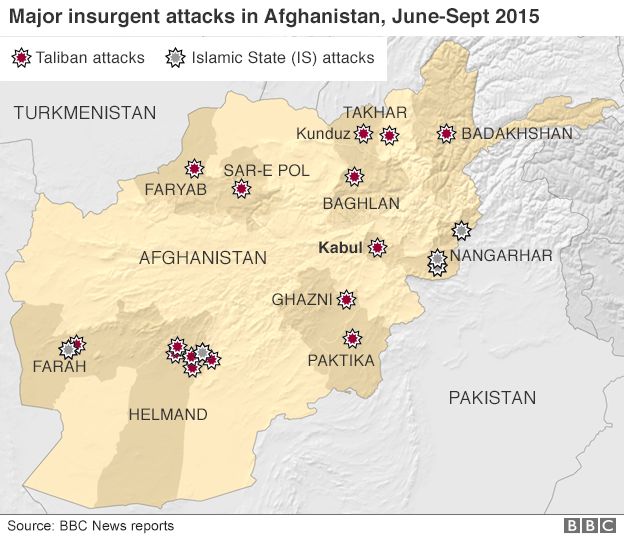 Given this reality, why is “buy time” today’s overriding objective? To dump this problem into the lap of the next administration?

Everyone has known that the real war in Afghanistan is with the aims of NonPakistan. The Taleban have been created, nurtured & supported by the NonPak military and managed through ISI, their intelligence arm. There were only two choices available to the Obama Administration during its entire tenure:

President Obama dedicated his presidency to close down the wars in Iraq & Afghanistan. So the first option above was anathema to him. And the second option was optically intolerable because a key US goal has been to build a representative government via elections. And the only people who could get elected are committed anti-NPak guys.

What you see today is the result – utter complete limbo in which the ground is slipping from under the feet of the Obama Administration. They simply cannot afford the optics of a Taleban takeover and the fall of the Ghani government. And the optics of sending thousands of additional troops to Afghanistan are almost as terrible. That leaves only one way out – somehow putting pressure on the Taleban to limit their attacks inside Afghanistan to an optically acceptable level. But America has no leverage in dealing with the Taleban. Who does? The wonderful regime that calls itself the land of the spiritually pure, Pak-i-Stan.

Lo & behold what happened this week. David Ignatius, the whisperer of the Department of Defense, wrote the following in his article in the Washington Post:

This is a gift because NonPak has realized from day one that the only way the world powers would allow it to keep its nuclear program is if it promises to destroy only India. So restricting its weapons to destroying India, or merely promising to restrict its nuclear weapons to attack India, is no restriction at all. And for what is already their policy, they get the gift of a nuclear deal with America? On top of that, they get to maintain their control of the Taleban and dominate Afghanistan after America leaves?

This is not just manna from heaven, it is the gift of heaven itself to the NonPak military & ISI. And the Obama Administration gets to trumpet this “gift” as fulfilling its non-proliferation mission – first by denying Iran the capability to make nuclear weapons and second by restricting NonPak to the destruction of India only.

But what about India & the new US-India strategic partnership? That is for the Indo-Pacific theater against China. That has nothing to do with NonPak & Afghanistan. After all, India is only a dream for the future, a call option in case India actually becomes a large economy some day. But NonPakistan is reality, today’s critically important reality. You can’t jettison today’s reality for tomorrow’s dreams.

And where can India go anyway? Russia is now a friend & ally of China. So Russia will not really help India against China. Therefore, as Secretary of State Hillary Clinton argued in the Obama first term,  India has nowhere to go except come to America for help. And Prime Minister Modi’s goal of economic growth in India will keep him tied to America’s apron strings.

The wonderful & long relationship between America & NonPakistan and the continuing Indian naivete about it are encapsulated in the tweet-exchange below:

What can go wrong in the marvelous win-win plan above? That wonderful institution called the United States Congress and, perhaps, public opinion in America and India. And what about Putin & Iran entering Afghanistan to fight Taleban-ISIS? That won’t happen until Putin wins in Syria. By that time, there will be a new administration in Washington DC, right?