During the past month, we have wondered why Hindus have been simply unable to stand up together against what they perceived about denigration of Hinduism on the CNN-Aslan show. The answer came to us this week when we realized what CNN-Aslan did was insignificant compared to what the Indian establishment does every day to Hindu men in India.

By Indian establishment we mean the Indian Judiciary, the Indian Police & the Indian Administration. These institutions were established by the British rulers to suppress & control the majority Hindu population. The  British left almost 70 years ago but the anti-Hindu ethos remains. And it shows up again & again in what laws are put on the books in free India & how these laws are administered, prosecuted & adjudicated.

The most recent example is what happened in the wake of the horrific rape-murder of a young woman in Delhi in 2012. The Indian establishment came under withering attack from the entire world for that incident. And they reacted by punishing the entire Hindu male population by abusive laws that violated basic human rights of men in the name of protecting women and by enforcing these laws to a crazy maddened degree.

How mad has the Indian system become? Just yesterday, a two-year boy was booked for molestation of a 35-year old woman in India. A case has been registered against the boy under Immoral Trafficking Act in the police station in Patahi village in the East Champaran district in the northeastern state of Bihar. As the Hindustan Times article states, the case by the woman seems to have been in retaliation for a case registered against her husband. 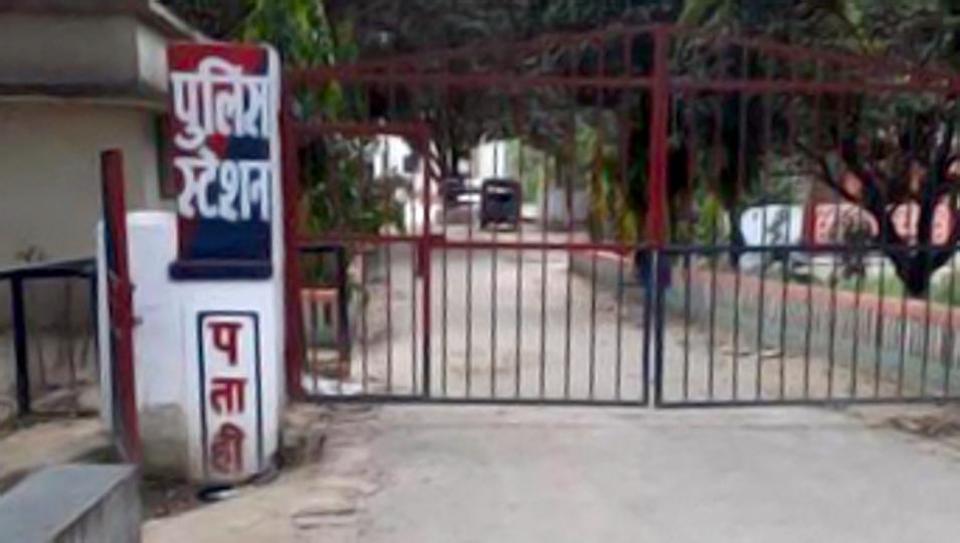 What about the enormous trauma on & of the two-year boy? No one cares because he is a boy. If this is done to a two-year old boy, what could women teachers do to the students in their care? Don’t wonder – read the tweet below: 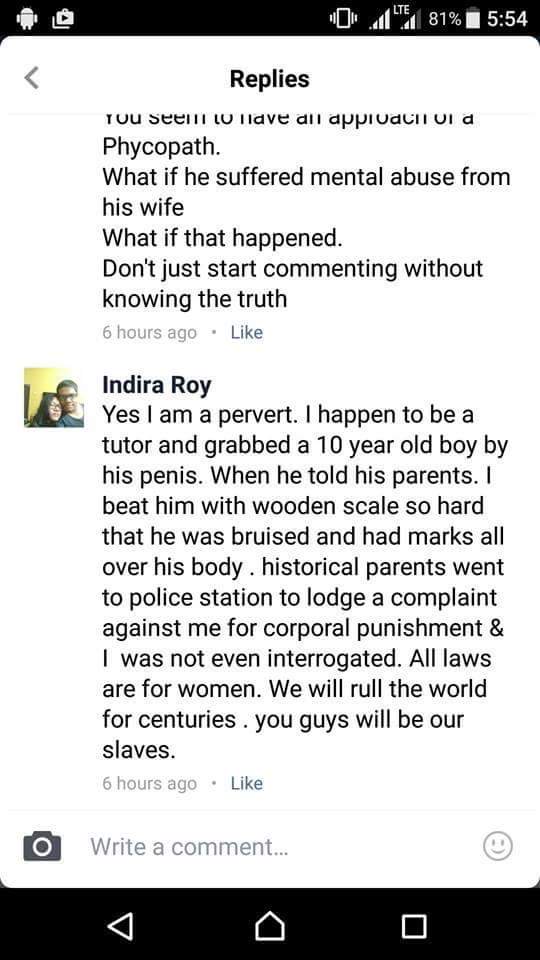 We have no independent sources to verify the utterly horrific claims in the tweet above. But based on what we know and what we have heard about similar incidents, what this Indira Roy claims sounds true. It is a reality of today’s India that a woman teacher can grab a 10-year old boy with his private parts, thrash him with a cane & leave visible marks of that caning and the police wouldn’t even interrogate the woman teacher.

Is that because no laws exist in India to prosecute a woman for hitting a male or even a minor boy or because the Indian establishment has decided that a woman has the right to inflict any level of physical damage on Hindu men & boys? We don’t know the precise answer but, to our knowledge, there is no provision for a woman sexually harassing/molesting a man or a boy in Indian jurisprudence.

Now you see why the charge of molestation has become a weapon for women, a weapon to be used for blackmail and for extortion or in any commercial dispute. Once this charge is made against a man or even a two-year old boy, it can take years to squash it in courts assuming the man/boy is lucky enough to find a sympathetic judge. This can be devastating to the career, business & the reputation of the man or boy. In the above case, the charge of molestation against the two-year old boy will stay on his record & haunt him for life. And nothing would happen to the woman who made this seemingly false charge.

How many American TV women, reporters & anchors, would feel comfortable in taking their young boys to India after reading this? A reporter’s young son could inadvertently bump against an Indian woman in a crowded street, at a train station or in an airport. That would enable the woman to charge the reporter’s son for sexual molestation/assault. Depending on the motives of the Indian woman, the American reporter mom would pay a large sum in damages to the woman to escape with her son from India.

This is not a joke – if a molestation case can be filed against a poor two-year old boy, can any American boy be safe in the horrible Indian system?

2. Intention to insult the modesty of a woman

Yes, India still has on its books, the concept of “modesty of a woman”. And “any word, gesture or act intended to insult the modesty of a woman” can land a man in jail. Every time we watch a CNBC show, especially CNBC Fast Money, we think of this Indian law. Almost every day, we can find a gesture, a word that can be construed by a CNBC woman as “insult” to her “modesty”. If you think we are kidding, consider the case of an executive who was arrested this week at Mumbai airport upon his return from America.

According to a Hindustan Times article, this 52-year old man had used the f*** off” term in an email to a woman employee last year. That enraged the woman and she filed a complaint under section 509 (word, gesture or act intended to insult the modesty of a woman) of the Indian Penal Code and under section 26 of the sexual harassment of women at workplace (Prevention, Prohibition and Redressal) Act, 2013.

All this for one use of the “f*** off” term in an email? And this is a criminal offense? How maddeningly archaic & abusive are Indian laws & Indian Justice system?

And this term is used rampantly in Mumbai in private & public conversations as it is in America. But at the discretion of a woman, it becomes a criminal offense & the Police will act diligently to prosecute the man who uses it. Of course, it is not a offense if a woman uses this term to a man. Because a man has no modesty or rights to civil treatment from a woman under Indian law.

And this is in Mumbai where pre-marital sexual acts are exploding in number. According to the Times of India, abortions by 13-15 year old girls rose 61% year-over-year last year. We have heard from Doctors that sexual acts by young girls & women are rampant & often without contraceptives because morning-after pills are available easily & even clinical abortions are now common. If there is a complication, as is reportedly the case in 33% of the cases, access to invasive abortions is easy. And it comes to light, the woman can always fall back on a rape charge.

And in this reality, the Indian legal system still maintains a “modesty of woman” legal statute to uphold the sacred image of a virtuous Indian woman who prizes her modesty above all.

The reality is that the vast majority of Indian men & women are decent & moral. But a small minority of men & women are not. But the Indian establishment believes firmly that the Hindu men are inherently rotten and the Hindu women are inherently & uniformly virtuous. So the only way is to criminalize all Indian men & ignore the actions of a minority of women who might take awful advantage of men.

By the way, as far as we know, only Indian woman are deemed so virtuous that they need “modesty of women” laws. Based on what we have heard, “White” women are not deemed so virtuous & Indian courts would not be so eager to give them the benefit of “modesty of woman” laws. What about black-complexioned African women? We shudder to think how Indian police officers might react to their claims to “modesty”.

And what does the Chief Justice of India’s Supreme Court say about this? He doesn’t seem to care about basic human rights of Hindu men. Instead, he is proud of how India is becoming a global center of legal arbitration.

3. Back to our CNN-Aslan point

We do wonder why Hindu men in India have never stood up against these horrible laws. May be it is the enormous damage done to their collective psyche. They have been conquered, occupied & treated like dirt for over 1,000 years. During this period, they learnt the futility of resistance and became tolerant of rampant abuse. Instead of resisting, they learned how to “adjust” and survive. That is why even today in crowded Mumbai trains people ask others to adjust as 6 people try to squeeze into space designed for 4 passengers.

This “adjust” attitude continues to serve Hindu men against wanton & false accusations from women. They apologize & pay damages as necessary and remain silent. In turn, they abuse other more tolerant people to vent their anger.

When a father has to “adjust” to his two-year old boy accused of molestation of a 35-year old woman or to his ten-year old boy being grabbed in his private parts & thrashed by his woman teacher, will that father get angry about his religion being denigrated by CNN on US TV?

How would that help the father of that two-year boy or of the 10-year boy above? Because, as we have been told, behavior of Muslims is governed by a separate Muslim Personal Law that is different & distinct from the main law that is applied to Buddhists, Christians, Hindus, Jains, Jews, and Sikhs. This Muslim Personal Law has its own mandates & penalties for upholding “modesty of” Muslim women & rights of men vis-as-vis women.

And the Muslim community & Muslim religious organizations are very alert about attack on Muslims. The 35-year old woman who charged a two-year Hindu boy would never have dared to do so if that boy were a Muslim. And the woman teacher who grabbed the private parts of her 10-year old student and thrashed him with a cane would never had dared to touch him if the boy were Muslim. Also no Muslim man has been arrested to our knowledge for insulting the modesty of an Indian woman.

So why don’t these Hindu men convert to Islam to protect themselves from the horrible men-abusing Indian laws? Guess there must be something to Hinduism, after all. something that CNN-Aslan just don’t get.