The visuals were magnificent. A stunningly opulent cavernous hall for President Trump to address the invitees. Heads of State of some 58 Muslim countries in attendance to hear the new President signal his intentions. It was even more Caesaresque than anything that greeted Julius Caesar in his first visit to the Middle East. 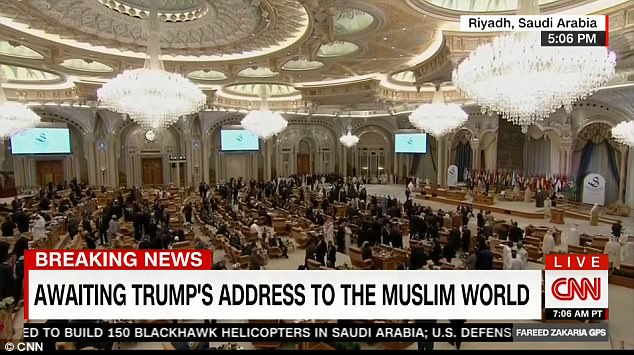 What a perfect display of American power & influence just as America is planning to withdraw from its intense involvement in Muslim Middle East? Yes, that is the real message of President Trump’s spectacular visit to Saudi Arabia.

America cannot disengage from the Middle East the way President Obama withdrew from Iraq. That was disastrous. Every player in the Middle East was aware of his intentions long before he actually announced the withdrawal. And Obama left without any successor regime that could maintain what America had achieved.

President Trump is far more intelligent and experienced. He knows you begin to leave at the height of their adulation of your power; you begin to leave when all of them are clamoring for you to show them some attention & support. A smart exit needs a slight of hand, a stirring declaration of long term commitment, an anointing of an ally and a call to arms against the next hated enemy. You begin to leave when you are being showered with tributes from your chosen ally with pomp and glory.

And what a glorious tribute did President Trump obtain for America? A $350 billion 10-year deal with $110 billion front-loaded in the first year. And funding of a multi-billion dollar fund for infrastructure buildup in America. A total deal that could create some 275,000 jobs in America over the next ten years. Julius Caesar would be maddened with envy were he here to witness it.

2. Back to the Future

The transmitted message was as powerful as the visuals were opulent. President Trump described his partnership with King Salman was a resurrection or rejuvenation of the beginning – the agreement between King Abdul Aziz & FDR. This is powerful and deep stuff at least to the Saudis & the Middle East. In addition, President Trump warmly acknowledged President Al-Sisi of Egypt and King Hussein of Jordan in his speech. He also spoke of the Emirates and recognized the support of Emirati troops in Afghanistan. 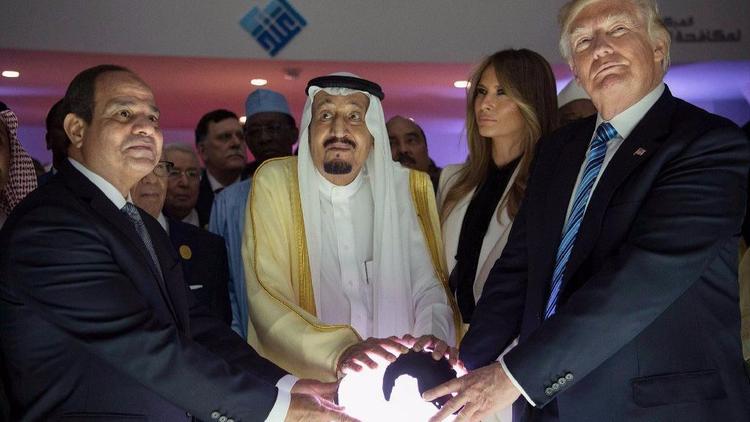 These were not idle or merely polite words, President Trump declared his recognition & support for the Core Arab Middle East – Saudi Arabia, Egypt and Jordan backed by and linked with Emirate states of the Gulf. From Riyadh, President Trump went to Israel to warm greetings from all in Israel. He left no doubt about the importance of Israel to his America.

Without saying so, President Trump made the alliance of Core Middle East, Emirates & Israel the friend among all friends and the fulcrum of American presence in the Middle East. What was left unsaid was that with such an economically strong & militarily dominant bloc of allies to protect America’s interests & image, America can slowly & gently reduce its footprint in the Middle East.

Look, the first fruits are already visible in the aftermath of the Manchester bombings from terrorists trained in Libya and the massacre of Christians in Egypt by ISIS. Just a few months ago, pressure would have mounted on America to act in Libya. No longer. Because Egyptian air force went into Libya and bombed what American planes would have bombed previously.

This action of Egypt may be a window into the near future in which members of this core alliance would use their armies to intervene in conflicts with America remaining in an advisory & supporting role. Meaning these allies will deliver manpower for actual warfare with American weapons paid for with Saudi-GCC money. We could see Jordan get more active along and inside the Syrian border with US supplied weapons, with Israeli air support & covert action and with Saudi-GCC money. We could see indirect action supported & backed by Saudi Arabia against Hezbollah inside Lebanon and potentially direct action against Hezbollah by Israel backed by Saudi Arabia & GCC.

This shows that the new core Middle Eastern alliance is not merely defensive in nature but capable of offensive tactics.

This has been the Saudi dream for decades and, after all their disappointment & anger about President Obama’s policies, the Saudis & GCC have reasons to celebrate. But there is a catch. The catch is that this alliance has to act against the Sunni terrorists in a manner America wants or at least they have to demonstrate their intentions to act against Sunni terrorists. Without that public & often acted upon assurance, Trump’s America cannot disengage.

Remember, the power lies with America and not this alliance. Because America can withdraw its support to the Saudi-Sunni cause any time it is convenient for America. Because America can at any moment threaten to veer towards supporting Iran or Turkey and thereby denying Saudis the rewards they seek.

In other words, President Trump has the Saudis right where he wants them and not the other way around as some experts have said. And he is ahead of the count with $110 billion in America’s pocket in the first year. What a contrast with President Obama’s deal with Iran in which Iran got $150 billion at the beginning of the deal.

Back on June 12, 2010, we had written in discussing Long Term Ramifications of Obama’s Middle East policy:

“The Middle East can be thought of as four distinct areas:

In stark contrast, the central message of President Trump’s visit is a reaffirmation America’s recognition & support of the Core Arab Center of the Middle East – Saudi Arabia, Egypt, Jordan backed by GCC & Israel against encroachment by non-Arab boundary states Turkey & Iran. This strong Core Arab Center could play off Turkey against Iran and vice versa.

Turkey remains a major ally of America but America has signaled clearly that America does not support neo-Ottomanesque expansion of non-Arab Turkey into Arab Middle East of which Damascus was a major center. You see this in Trump Administration’s decision to arm Syrian Kurds to take on ISIS in Syria against the wishes & despite the vehement protests of Turkey. If the offensive against ISIS succeeds in Syria, we could possibly see a potential Kurdish area inside Turkey become a bargaining chip against Turkey.

Iraq is determined to not allow Turkey to get a foothold in North-western Iraq & Syria. In this goal, the Shiite Iraqi regime could draw the support of Sunni Core of Saudi Arabia, Egypt, Jordan as well  as of its benefactor Iran.

Iran, on the other hand, might have seen its best days vis-a-vis the Core Arab Center. As the ISIS threat recedes, Syria could come into play for America, Turkey & the Core Arab center. This week we saw news reports about a deal with Russia in which America would lift sanctions against Russia in exchange for Russia throwing Iran out of Syria. That is far-fetched because Russia does not control the Assad regime and Russia would lose too much face if they tried to throw out Assad to curry favor with America.

But a partition of Syria remains a viable option and a well drawn partition of Syria into an Alawaite region, Sunni-Iraqi & Sunni-Jordanian regions, a Kurdish-Turkey region could end up reducing Iran’s influence in Syria to a negligible level. And that would isolate Hezbollah to a large extent and provide room for Sunnis in Lebanon.

Trump’s America has painted a bulls-eye on Iran because of Iran’s ballistic missile program. Yes, Iran is adhering to the conditions of its Nuclear deal so far but no one feels comfortable about Iran’s plans for the future. The real fear is that Iran would become the next North Korea and no one wants any part of that, not even Russia. That is another reason for the massive arms deal between Saudi Arabia and Iran – to make Saudi Arabia Air force strong enough to take on Iran militarily in a short conflict.

All this makes good sense and it is a good beginning. But the Middle East has its own charming or not so charming ways of making well thought out plans look stupid.

Having said, we think President Trump has made a very good beginning to disengage physically from the Middle East while keeping major American goals in tact. Not bad for a guy who continues to be scorned by the cognoscenti!