The biggest mistake in a war between two different cultures is lack of understanding of the enemy and a consequent supremacist attitude towards the enemy. One manifestation of this comes in “if we do this, what is the  difference between them & us“? The smart victorious side doesn’t waste energy in these self-defeating self-recriminations. It is enough for them to be the “good guys“; they don’t have to be the “perfect guys”. Witness the carpet bombing of Dresden, Germany and the destruction of Hiroshima, Nagasaki in World War II. Unfortunately, that consistent determination has been sorely lacking the war against ISIS. Until now.

It might be instructive to read what was written on November 21, 2015 in the article War Against ISIS – Strategy, Tactics & Reality. Section 3 of that article was titled – What Drives ISIS & Their Recruits?

This image of Muslims as conquerors is essential for proselytization of young men into a campaign for regaining glory via violence. And the proselytizers have “invented” conquering Muslim heroes to fulfill their needs. Go to the Indian Subcontinent & you will find Muslims firmly believing that Alexander of Macedonia was in reality an Iranian Muslim named Sikandar. You cannot shake them out of this falsehood with evidence & facts. Same with Genghis Khan – the man who slaughtered more Muslims than any other man in history. But he is regarded as a Muslim conqueror and people point to conversion to Islam by his descendants as proof of Islam’s conquests.

Notice the history of famous Muslim conquerors. They have hardly been gentle in victory. Instead their history has been to kill the men, enslave the women and force a complete mental surrender from their victims with humiliating brutality.

The real point is you cannot simply defeat an ISIS type enemy by accepting their surrender & imprisoning them. The only successful strategy has been to annihilate them & subject the survivors to intense humiliation that will destroy their myth of invincibility.

Now finally we have a clear understanding of this in an American Administration. You see & hear this in the words of the man who has been entrusted with this responsibility – Secretary of Defense General James Mattis, the Warrior Monk. His 30-minute presentation to John Dickerson of CBS is an absolute must watch in our opinion. Kudos to CBS News for posting the entire transcript online.

That is the “annihilation” phase. What about “humiliation”?

The dedication to this comes directly & clearly from President Trump & that was his message to the international community last week: 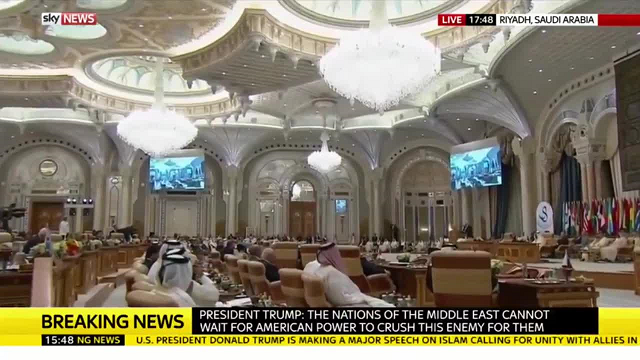 It isn’t enough to merely humiliate terrorists like ISIS; it is equally important to humiliate nations that encourage & support the terrorists. President Trump did that to Iran explicitly with words of condemnation & warning at the summit. He also did to the other supporter of terrorism, NaPakistan, by non-verbal actions. And that was a disaster for NaPak as an article in the Diplomat described:

Getting back to General Mattis, he was clear how long & hard this war is going to be:

And as a warrior & a commander of warriors, Secretary Mattis understands what his forces are and are not:

As a monk, a warrior monk, we should expect serenity from Secretary Mattis, right?

JOHN DICKERSON of CBS News: What keeps you awake at night?

SECRETARY JAMES MATTIS: Nothing. I keep other people awake at night.

This interview by Secretary Mattis, his close working relationship with Secretary of State Tillerson, and the trust in them by a totally committed strong President Trump certainly lets us sleep soundly. Never before have we felt so reassured about the war against Islamic terrorism.