Yes, different sectors rallied on Thursday & Friday but the indices couldn’t care less. Perhaps that is due to the Treasury market that seems to have the bit within its teeth. Yes, rates did move up a bit on Thursday after the big ADP number but that up move didn’t seem to have any vigor to it. And there was no doubting the strength of Friday’s down move in rates after the weak NFP number. The 10-year yield broke the 2.17% level and the 10-year yield, 30-year yield and TLT all broke through their 200-day moving averages. If this break is sustained next week, it could presage a serious move.

And a serious down move in rates would stay FOMC’s hand and wouldn’t that be great for small cap stocks, FANGs, Utilities? Is that why IWM rallied so hard in the last couple of days? 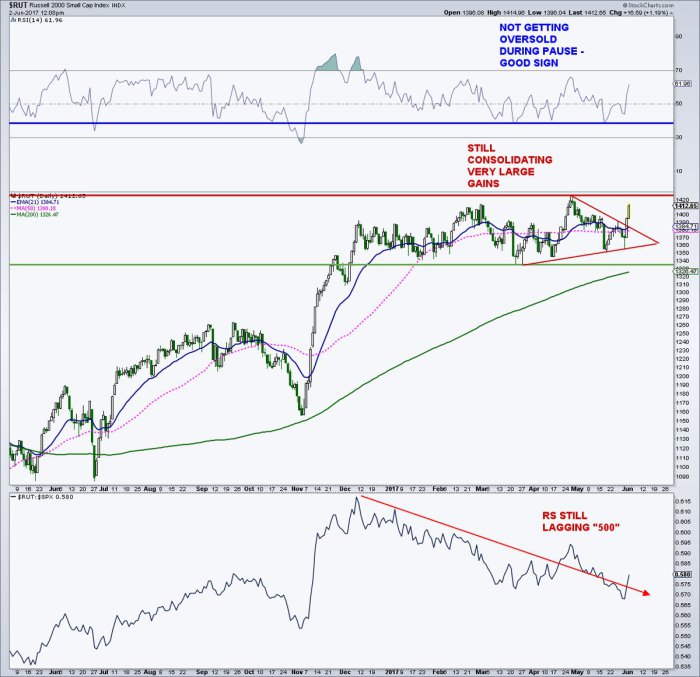 And if the FOMC does stay the course and raise rates on June 14 as the market probability suggests, then wouldn’t that be taken as evidence of economic strength & propel resource & cyclical stocks higher?

Doesn’t the above discussion say something about sentiment about stocks?

Given how resilient stocks have been, who needs protection, right? 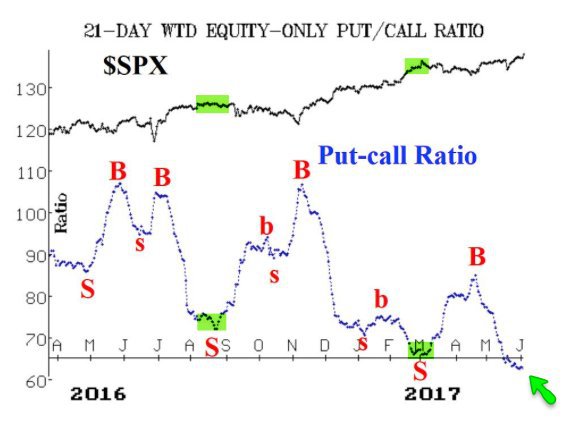 Perhaps exhaustion is what it would take to get a slowdown in the stock indices?

One way to look at this week’s rate action is:

If Treasuries keep rallying, they would make a lot of people happy:

One reason Treasuries are rallying could be: 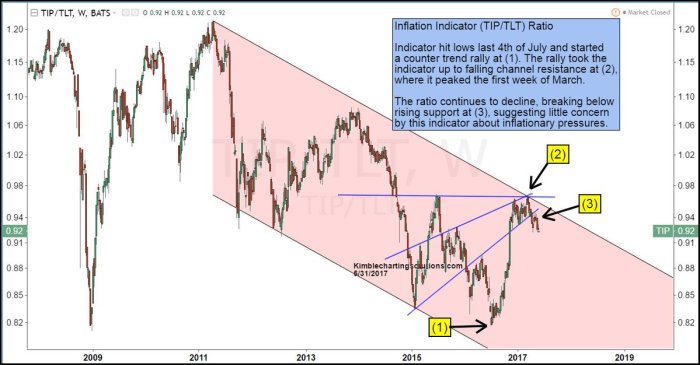 What might be one way to get higher inflation expectations & steepen the yield curve? For the FOMC to NOT raise rates on June 14. Because we know what will happen if they raise rates – the yield curve will flatten & the 10-year might go to 2% especially if the NFP number in July comes in weak as well. Already: 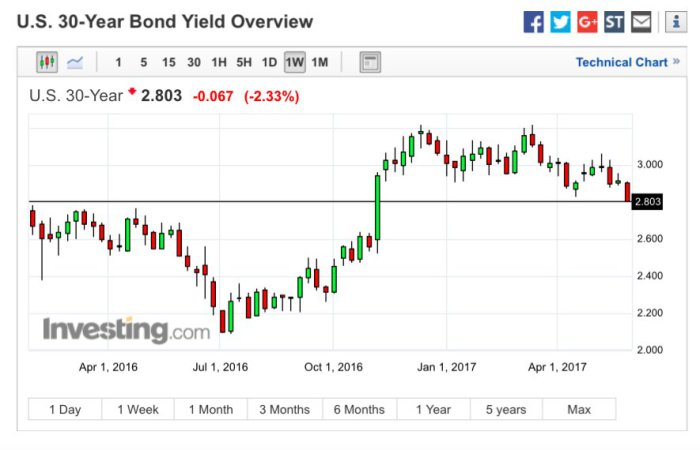 The above chart might be the best visual reason why the FOMC should not raise rates on June 14. They don’t have to sound dovish; they can simply dismiss the recent weakness in data with their new favorite word – “transitory“.

For us, it is pretty simple. If Friday’s break of 200-day moving average by the 10-year & 30-year yields is sustained, then yields will begin a new down leg. If they bounce back, then the range can be maintained. It might take a lot though to get the 10-year yield back to 2.40% let alone 2.60%.

Last week we broached the topic of an unexpected Dollar rally. Lo & behold, Jim Cramer on this Tuesday devoted s segment to the case of a serious Dollar rally via the opinions of his colleague @fibonacciqueen Carolyn Boroden. Best to hear the reasons from him:

The big event next week is the election in Britain. That might create some volatility in currencies. And then if the FOMC stays its hand the following week, that might be Dollar positive.

We don’t have a clue what might trigger a Dollar rally but if we do get one then that might just be what creates some volatility in stocks & rates.

Getting back to US Stocks, what about a June Swoon?

And do stocks top out when the Advance-Decline line is making new highs? 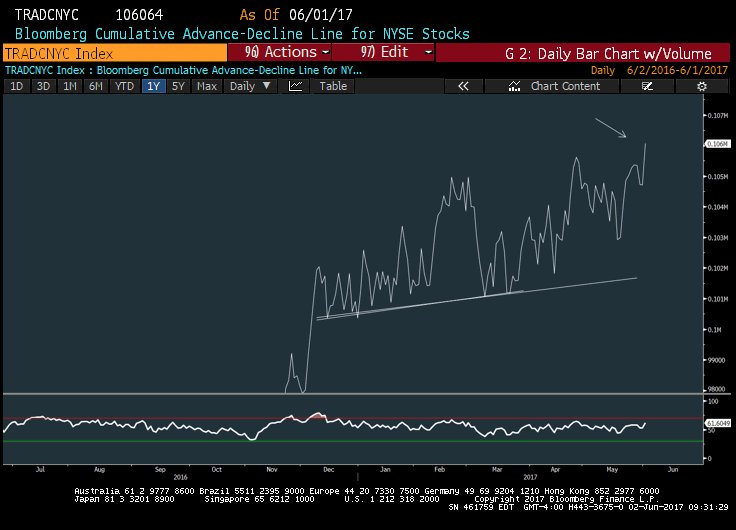 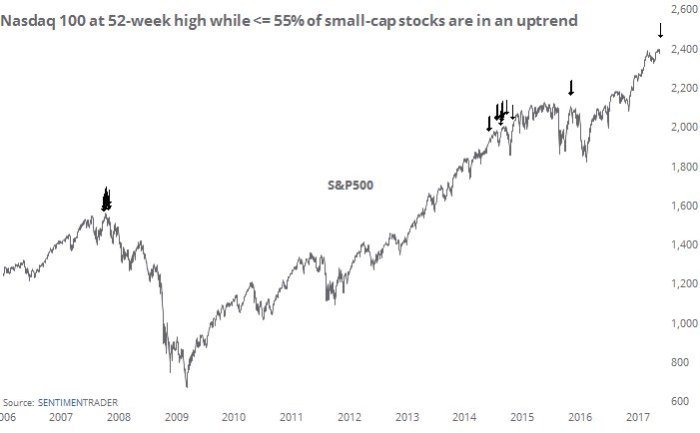 Gold and Silver both rallied by about 1% but Gold Miners fell. Is that a bearish divergence? Carter Worth, resident technician at CNBC Options Action and a new bull (as of last week) on Gold said on Friday that there was “plenty more to go” in Gold. And,

Not every one is bullish on Gold: 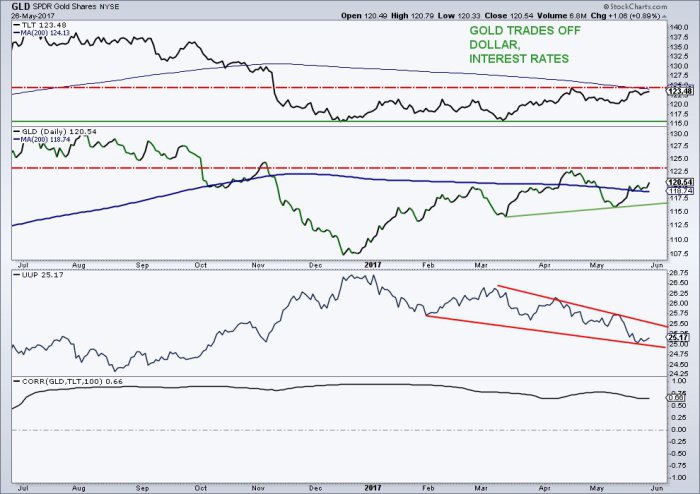 Oil fell by 4% this week and Oil ETFs fell hard as well. Carter Worth who has been clearly contemptuous of oil remained so this week. On the other hand, strategist Tom Lee reiterated his bullishness on Oil & Energy stocks: