Yes it seems to be. Of course, by “it” we mean the promise of lower taxes & bigger paychecks. The Senate passed the budget deal on Thursday evening and the House is expected to pass the same bill next week. The final lap is the $1.5 trillion tax cut, sorry tax reform. We heard some one with impeccable credentials say on TV that it could be passed this year.

Was it already factored in by markets? Heck no, said risk markets. The entire Treasury curve shot up in yield on Friday and steepened too. Gold fell & stocks rallied. Why shouldn’t they? You have the stimulus from the hurricanes and now the $1.5 trillion tax cut. And if all this was not enough, even IBM went from really bad to not all that bad and rallied by $26. The final forget about it was sounded by Lakshman Achuthan of ECRI who told BTV to forget about recession any time soon. Wow!

Something interesting happened to the 10-5 year curve. It closed at 36 bps, a low for this year we think, a steep drop from the 51 bps at the end of 2016. And a drop of 6 bps from Friday, September 8, the day before Irma. Given that the big 4 on the Treasury curve are 30 yrs, 10, 5 & 2, the 10-5 spread is lower than both 51 bps for 30-10 spread and 44 bps for 5-2 spread. What does this mean? Frankly, we don’t know except the obvious that the force driving up the belly of the curve is stronger than the force driving the longer end up. Aggressive bond market or aggressive Fed? 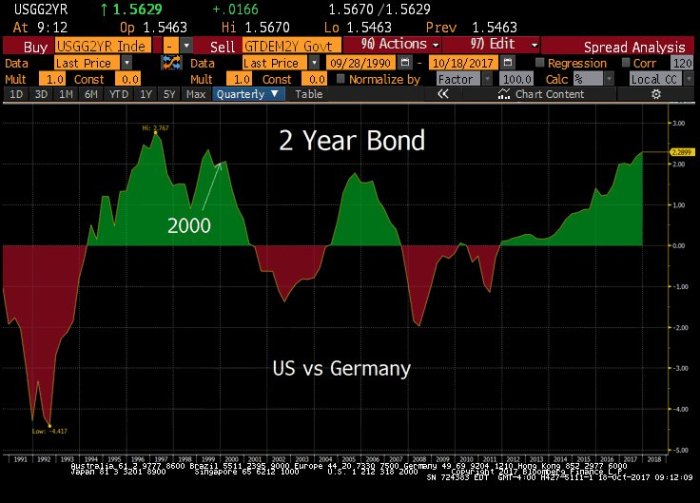 If you look closely, you see that this current spread widening began in late 2010. Did it have anything to do with the start of QE? If so, will it begin reversing when QT begins in October 2017 as Chair Yellen has announced? Why is this important? Perhaps because, as J C Parets said to Larry McDonald in their podcast this week, the chart of the S&P shows a strong correlation to the 2-year Treasury-Bund spread.

The chart also shows that this spread widening is a part of the post-Irma trend, the trend that continues to be supported by rising expectations of a tax cut. Look at the performance of the asset classes since Friday, September 8, 2017 – the Friday before Irma:

What can derail this train before year-end?

2. Happy Diwali – the Festival of Lights

Why read when you can watch?