You have to admit it is really getting interesting in the old Eurasian space from the Middle East to Far East.

A big story that has not received much attention is that Turkey has discovered  320 billion cubic meters of natural gas in the Black Sea. But the Black Sea & the Eastern Mediterranean are kinda small areas with other nations claiming rights to stuff within it.

One such is Greece. And on Thursday, according to Geopolitical Futures, the Greek government said it would ratify agreements with Egypt and Italy next week on maritime boundaries that Turkey says infringe on its territory in the sea. Meanwhile, French President Emmanuel Macron and German Chancellor Angela Merkel said after a meeting at Macron’s summer residence that they would protect EU member states’ sovereignty and defend international law in the Eastern Mediterranean.

We don’t know what the French & German M&M mean by “member”. Greece is an EU “member state” but Turkey is a NATO “member” state. And recently the French Navy dispatched a ship & a couple of fighter planes for an exercise in the Mediterranean with Egypt clearly intended to warn Turkey. But Germany might be much more interested in Belarus & Russia. And Russia is never indifferent to what is going on in the Black Sea including Libya where Russia & Egypt are against Turkey.

Now turn to the southern tip of the Middle East and focus on the big deal between Israel & United Arab Emirates. Everyday has known about the alliance that has been built for years between Israel & the Gulf States. But that has been kept below the public surface because of fear of public opinion about the Israeli-Palestinian problem. Now even Lebanon, far closer to the Palestinian issue, is rebelling against use of Lebanese resources for Palestine instead of Lebanon. And Hezbollah is, for the first time in recent years, on the defensive inside Lebanon. 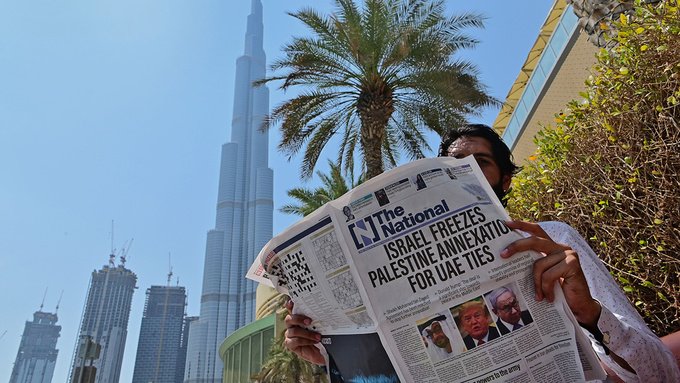 So this week, the underneath came up to the surface, the private became public & the unsigned got signed. The United Arab Emirates, led by Abu Dhabi, signed a historic accord with Israel. The accord in itself is not a big deal but the decision to make it public & formal is. The other really big deal is the tacit support Saudi Arabia gave to this accord.

This accord could not have been signed without the support & encouragement of the Trump Administration. And Trump has made it clear that the USA has less & less interest in getting involved in the Middle Eastern conflicts. So the natural course of action was for the Arabs to do a deal with Israel against Iran.

And Iran is itself divided on this deal which accelerated the split between the “reformist” movement inside Iran and the Ayatollahs-Republican Guard coalition. A CFR (Council of Foreign Relations) piece quoted two such “leaders” blaming the Iranian Government:

And Iran has deep & critical economic ties with the UAE, a much more moderate & modern entity than Saudi Arabia. So Iran cannot go nuts against this UAE deal.

Post American energy-independence, the Middle East is dependent on two big buyers – India & China. That was not difficult until the recent China-India armed conflict. Now India has realized that China is waging an undeclared war on India & Indian borders. India is now, step-by-step, shutting down Chinese Apps & now critical Chinese companies like Huawei & ZTE from India. So we expect all the energy players in the Middle East to avoid getting snared in this conflict between China & India.

That apparently includes Iran despite Iran’s huge energy accord with China that also involves China building and operating the port of Jask on the Iranian coast. 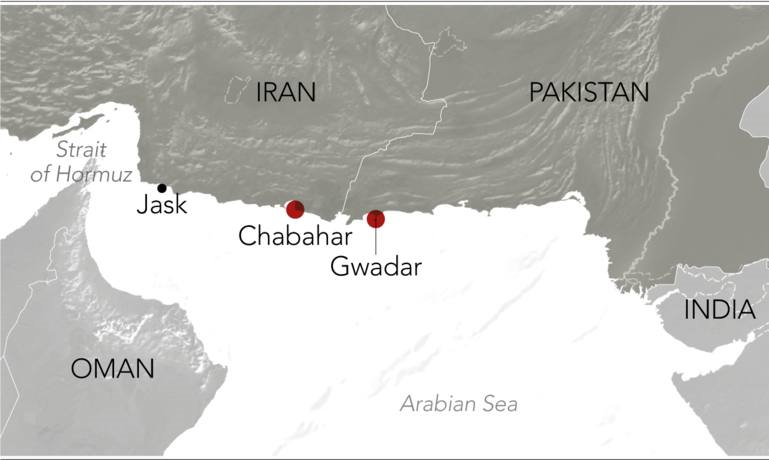 Gwadar, inside NaPakistan, is already a Chinese built & operated port while Chabahar, inside Iran, is an Indian built & operated port. So, after the huge China deal, it was assumed that Iran would take away Chabahar from India. They have not. Instead, Iran has extended India’s management of Chabahar for the next two years. Does that mean Iran does not want to become a Chinese appendage like what NaPakistan has become and wants to maintain economic relations with India?

Speaking of that failed state, NaPakistan has prided itself on being a true Muslim ally of Saudi Arabia, a time tested relationship for decades. Major political decisions inside Napakistan had to be taken with Saudi concurrence, including whether Nawaz Sharif, ex-President, would be sentenced to death or merely banished to Saudi Arabia.

But this week, in a stunning act, Saudi Arabia delivered a public snub to the government of Napakistan, something that no one has seen before. Yes, NaPakistan brought it upon themselves by allowing their foreign minister to publicly criticize Saudis for not supporting Napak in their crazy pursuit of India’s Kashmir state. Heck, even the Palestinian leaders were never this stupid.

NaPakistan has made itself into a pariah state by becoming a Chinese vassal for all real & practical purposes. And now the United States has declared China as their main strategic competitor & almost an enemy. So very few countries have any desire or need to support NaPakistan or even maintain more than a superficial relationship with that failed state. Heck, even Iran signaled that by extending the Chahbahar contract with India.

That brings us to China.

Kublai Khan, the grandson of Mongolian Genghis Khan, became Chinese & began the Yuan dynasty of China. He was declared the Khan of all Khans by the Mongolian assembly or Kurultai. That meant he had moral or even political authority, if not actual control, over the other 3 Khanates ruled by other family members of the Genghis Khan family. Look at how far-reaching Kublai’s empire was (in deep purple). 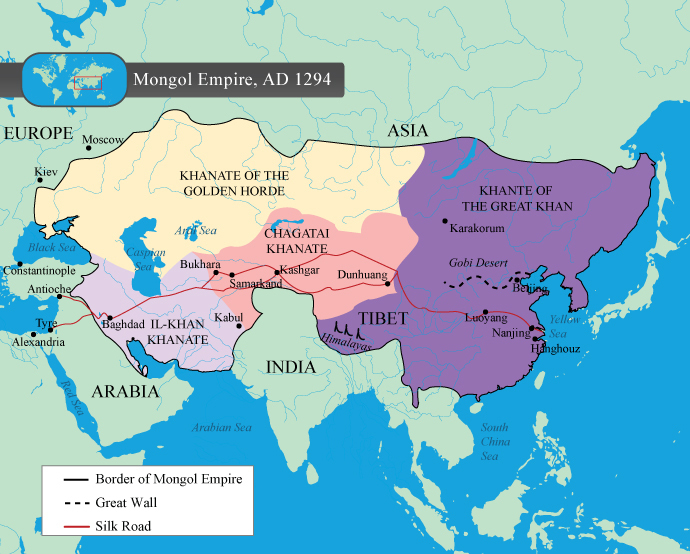 Kublai’s “Chinese” empire encompassed today’s Mongolia, Manchuria & Korea. His crowning achievement was destruction of the Song empire of Southern China. He truly became the Khan of all Khans with that victory.

Now compare that to today’s China under Xi Jin Ping: 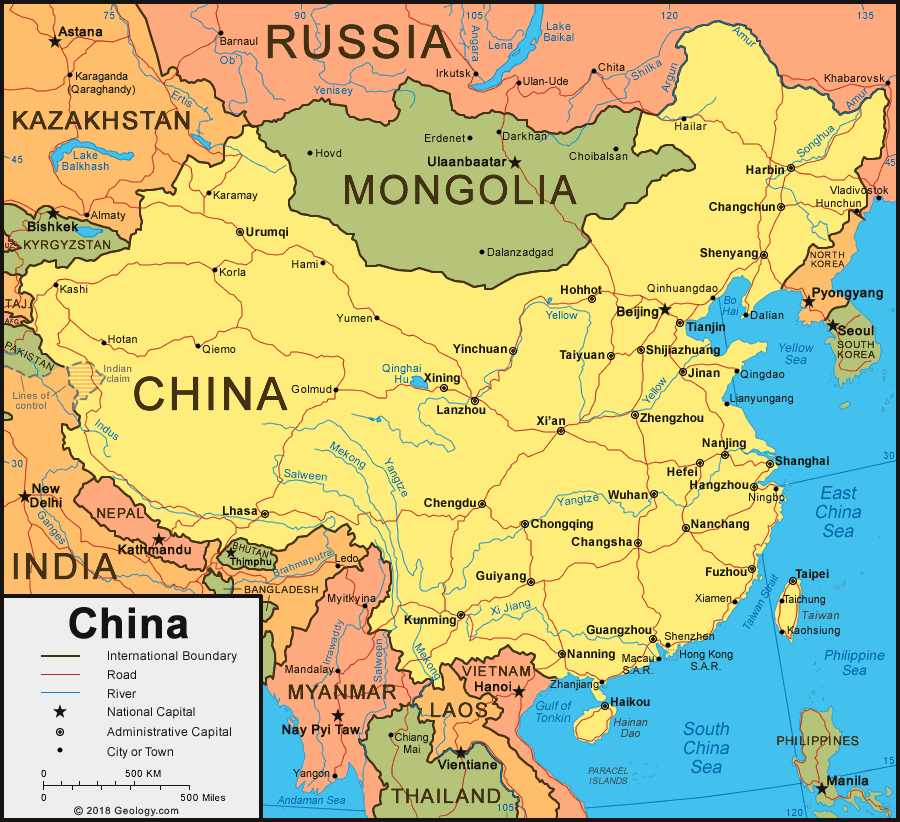 Despite being Khan of all Khans, Kublai Khan faced internal dissension that weakened his reign, revolt from his cousins who preferred the traditional capital of Karakorum in Mongolia instead of the new capital in China where Kublai held court. It was a demand for sharing the power, the absolute power that Kublai wanted & enjoyed for some time. When he felt vulnerable, Kublai had to hit out as he did against his cousin Ariq or by attacking the Chinese Song empire in the South.

As it is widely talked about now (even Jim Cramer alluded to it in passing this week), Xi is facing a widening internal conflict. A couple of weeks ago, Cai Xia, a professor at the Central Party School, delivered a lecture saying President Xi Jinping was “killing the country” and that his unchecked power made him an enemy of the world. What does this mean?

George Friedman, founder of Geopolitical Futures, wrote this week that  “Cai has powerful support in the Central Committee. If it is strong enough to allow these attacks, then there is a question of just how powerful Xi is. My view is that the various problems that China has faced has emboldened his enemies such that they are attacking him publicly“.

But Friedman also admitted that “.. my colleague, Phillip Orchard, does not agree with me. He argues that Xi remains powerful and that not too much should be read into Cai’s statement.” The two also differ about why Xi has launched a big purge of the Chinese establishment. Friedman believes it is out of weakness while Orchard believes to the contrary.

We tend to side with Orchard at this stage. Our own reading suggests that really strong leaders don’t topple  merely via internal dissent. Mao did not; Stalin did not; Hitler did not and Kublai certainly did not.

Such leaders do topple if they embark on an adventure to demonstrate their strength & purpose and fail badly in that adventure. Kublai Khan himself embarked on two such adventures.

The first one was against the walled city of Xiangyang that had defeated Kublai’s attacks before. In the excellent Netflix series on Mongols, Kublai tells Marco Polo that whether his siege machines are ready or not, he will march. Luckily for him, the machines were ready by the time they reached Xiangyang & destroyed the walls. Kublai won that battle & with that became the emperor of all China.

Kublai’s second big adventure was the invasion of Japan with an armada of over 1,000 boats. That was an utter & unadulterated disaster. His ill-constructed armada was destroyed and the vaunted Mongol war machine proved again that war at sea is very very different than war on land. This colossal defeat was the end of Kublai Khan, the last Khan of the Khans, and began the end of the vast Mongol empire.

5. Taiwan – Will it be Xi’s Xiangyang or Japan?

This is not an idle discussion. We urge all to read this week’s article by the aforementioned  Phillip Orchard of Geopolitical Futures titled “China’s War on Taiwan Won’t Start in Taiwan“. He points out that China will not attack Taiwan “unless it is extremely confident in its ability to win, or it is simply too desperate not to“.

But the really big issue for Xi’s China would be what Phillip Orchard wrote in his opening paragraph:

The second we think might be the really big determinant. And that would depend on whether Trump gets re-elected or Biden gets elected.

Editor’s PS – We strongly urge all to read the above mentioned article by Phillip Orchard, especially the military challenges for Beijing and the military capabilities of Taiwan’s defense. And watch at least Season Two of the Netflix series Mongols to get a sense of Kublai Khan & the internal pressures that mount on him despite his huge victory over China’s Song empire.