Remember Wednesday? The day Salesforce.com reported a quarter than even stunned their chairman Mark Benioff. The Salesforce stock exploded up 25%+ and led to a buying panic in cloud or mo-mo stocks. Adobe was up 9%. Netflix was up 11.6% & Facebook was up 8%. In contrast, banks were down & so were airlines. NDX was up over 2% but Russell 2000 was down 70 bps. Was below the message from Wednesday’s market?

But Rich Bernstein saw a different message in Wednesday’s market action. He said to CNBC’s Kelly Evans on Wednesday afternoon – “anytime you see NDX up like this & Russell 2000 down, you have to be pessimistic about the economy“. He wondered “whether the liquidity will make it into the real economy” and added that “the transmission process from monetary policy to the real economy has broken down“.

To him, the NDX & tech stocks were different from what he termed as the “real economy”, presumably the one reflected in the Russell 2000. If he meant that the real economy is the small business economy, then his inference is indeed correct. We all know that 80% of jobs are in the small business sector, a sector that is being hurt very very badly for lack of adequate fiscal stimulus.

But what about the 3rd economy – the industrial economy who strength is reflected in industrial material prices? Guess what Lakshman Achuthan of ECRI told CNBC’s Rahel Soloman* on Wednesday: 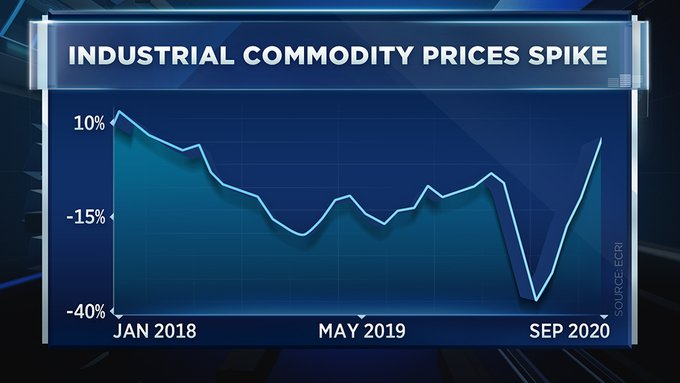 Go back to March-April 2020 when dire warnings about a long depressionary recession were heard from most corners. Recall that Lakshman Achuthan stood firm & made the then stunning call that the 2020 recession would be one of the shortest U.S. economic recessions on record.  He hit a bulls-eye on that prediction. So we are inclined to go with his prediction of a strong cyclical industrial recovery.

Listen to him explain his case & how non-exchange material (benzene, tallow) pricing is also very strong.

Thursday’s stock market seemed to listen to Lakshman’s message. Airlines & Banks flew while the cloud & mo-mo stocks gave back about half of their Wednesday’s gains. This market action had a lot to do with the optimism generated by the $5 test announced by Abbott. With a very quick & inexpensive test, the inclination to travel, the urge to go out will be back fast & strong was the expectation.

But that still leaves a lukewarm small business economy, the one that might surprise negatively next week with a worse than expected Payrolls report.

Last week, we highlighted the views of Larry Williams (via Jim Cramer) and others to term the upcoming rally in the U.S. Dollar as “the big change”. Based on the reaction to what Fed Chairman Powell said, we may actually get a reverse big move. 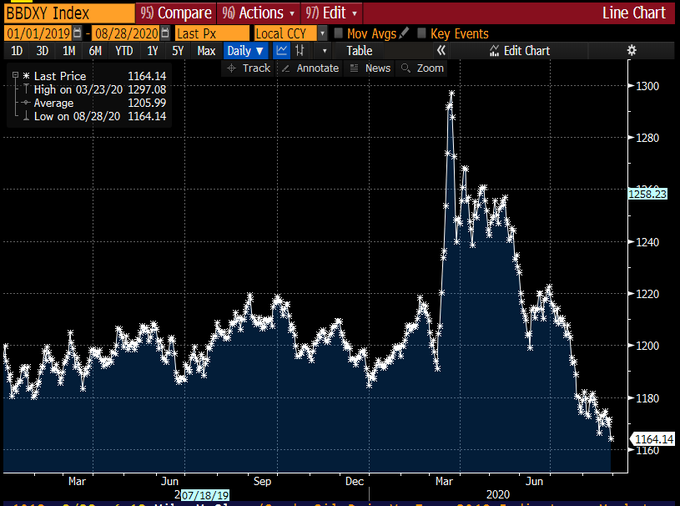 They get what they wish? 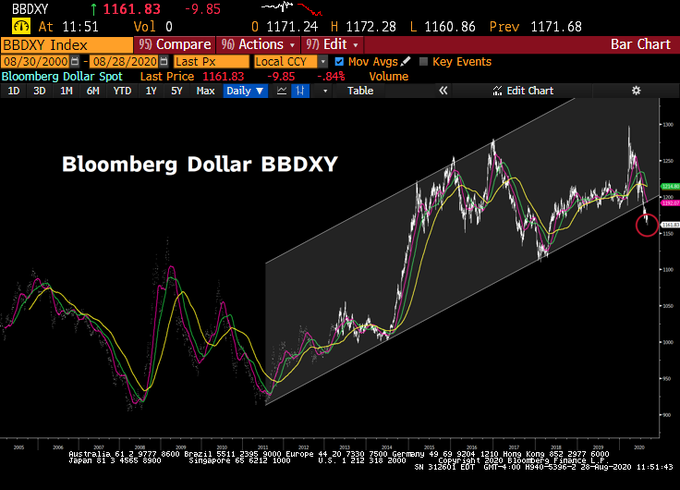 Perhaps, we are in the later innings? 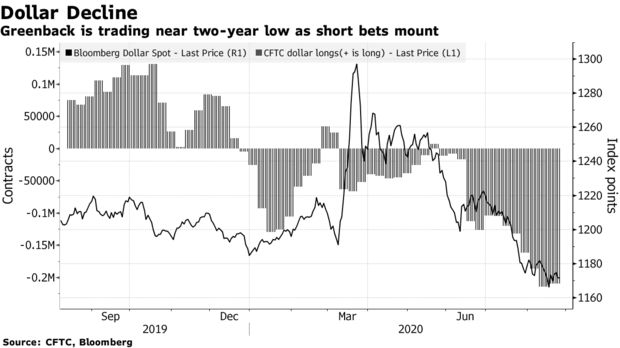 Treasury rates exploded to the upside in a big steepening on Thursday after Powell’s speech. The 30-year yield jumped up 10 bps to close above 1.5%; 20-yr yield jumped up 9 bps; the 10-year rose 6 bps to close just below 75 bps. In contrast, the 3-1 year curve was almost unchanged. Highly natural because Powell committed the Fed to not raise rates even if inflation crossed above 2%. 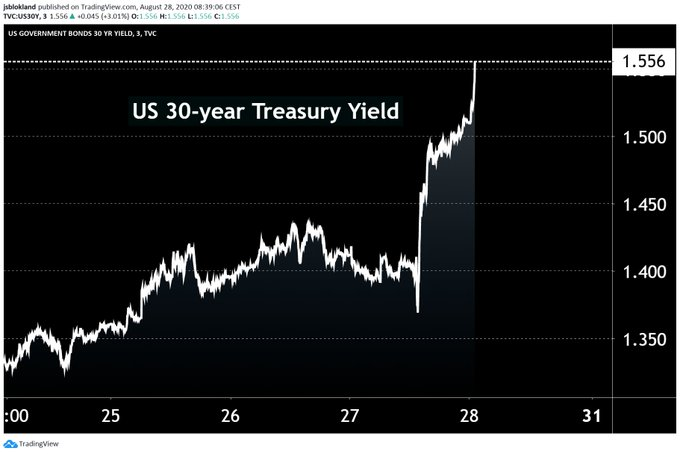 Remember the term “convexity of low rates“? We all saw that in action on Thursday & Friday:

But the rates were going up since Monday ahead of Powell’s speech. And on Friday, rates actually gave up their morning highs to closer lower. Yes, the 30-year yield closed up 1.4 bps to 1.514% & the 20-year yield closed almost unchanged. But the 10-year yield closed lower by 1.7 bps and so did the 7-1 year curve. Next week should be interesting with the Non-Farm payrolls report.

Frankly what Powell said was not that surprising. He simply said that he would let inflation rise above 2%, something they have been hinting for some time. Actually, they keep praying for inflation that hasn’t shown any sign of coming. What about ECRI’s ‘industrial economy firing on all cylinders”? Shouldn’t that lead to higher inflation soon? Actually not, said Lakshman Achuthan in the clip above. He explained:

Look where the yields are in maturities the Fed can control, real yields: 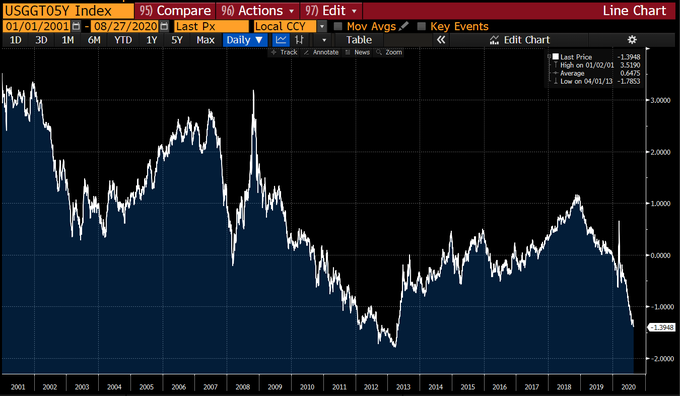 All week we kept noticing that leveraged DPG & UTG were underperforming the unleveraged ETFs, HYG & JNK. That is a sign, at least to us, of liquidity getting constrained. Then on Friday, we saw: 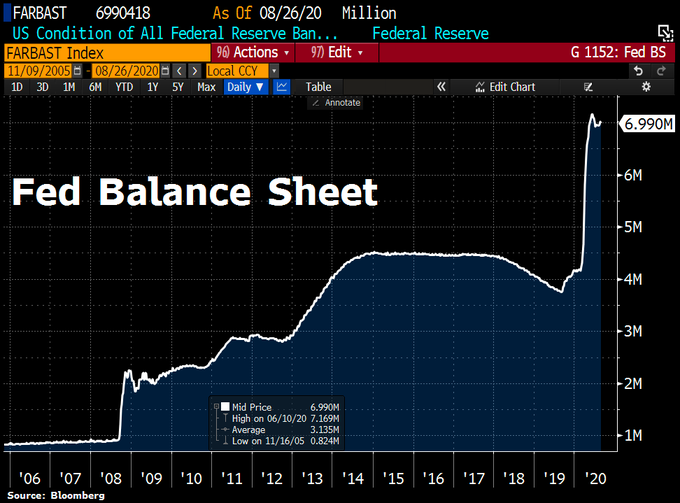 Apart from being a liquidity constraining force, the Fed’s Balance Sheet is also linked to volatility: 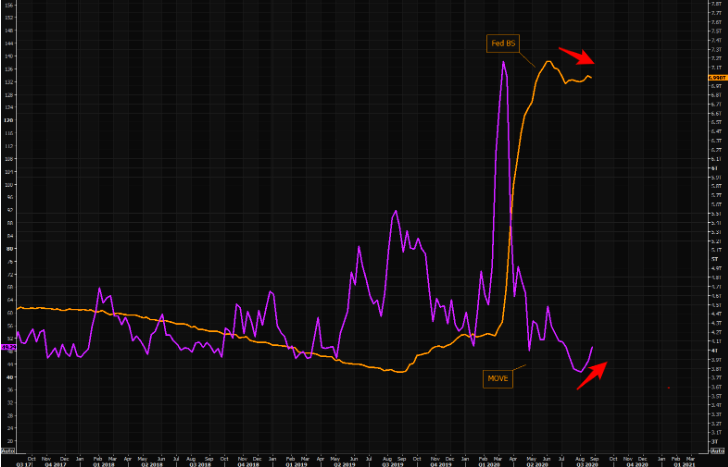 So while Powell tells us that he will let inflation go up, his Fed keeps reducing liquidity, a clearly dis-inflationary action. So which Powell do we believe – the talking one or the walking one?

Liquidity reduction is also being noticed in the S&P 500 e-mini futures: 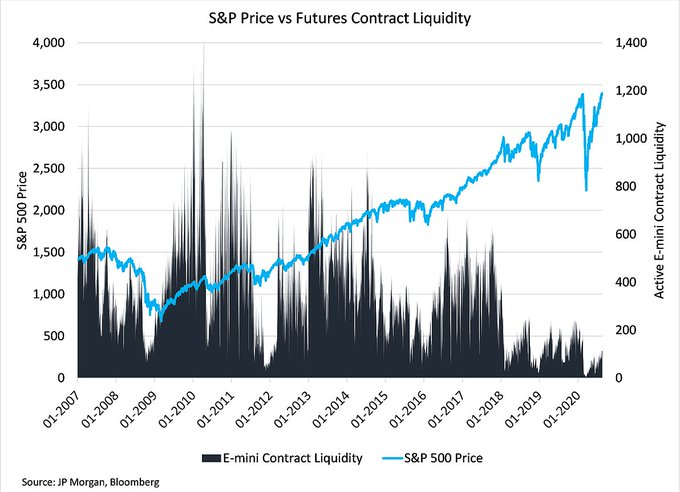 But just like Gold et al, non-US stocks love Powell’s impact on the Dollar or as Steven Strazza of All Star Charts put it “The World Is Breaking Out“:

Is “this has never happened before” another way of saying “this time it is different“? 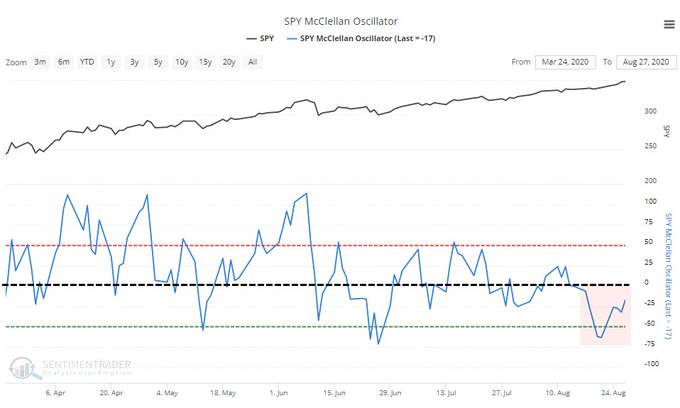 What about Gamma? Is it ever going down or will it only do so after it also hits a new all-time high? 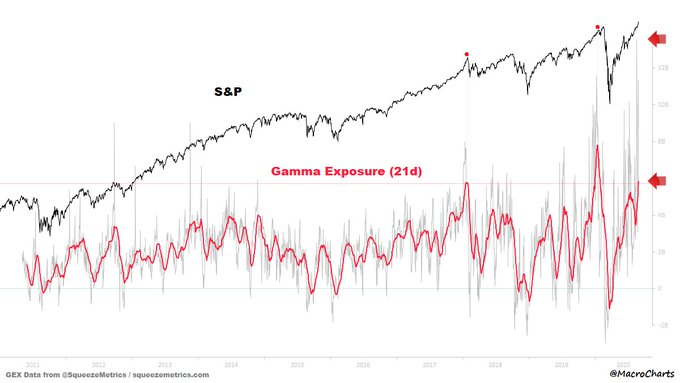 How about simple advice simply stated?

Which do you prefer – ratios or just numerators? That seemingly dumb-ish question may actually bigly relevant to the state of today’s stock market.

Ms. Eisen was kinda misquoting Rosie, if our memory serves us correctly. We do recall David Rosenberg stop short of calling the stock market a bubble but Ms. Eisen did get his tone right in her summary quote. There is no doubt that factually the amount of liquidity added is highly highly pronounced & could easily be described as “most pronounced liquidity bubble of all time“, at least from a numerator-only view.

But there is a purpose to the liquidity added by the Fed. Yes, this liquidity is not being transmitted to the “real economy” as Rich Bernstein, David Rosenberg’s old colleague, told Kelly Evans, Ms. Eisen’s CNBC colleague. But that is not the fault of Powell, the liquidity creator. Blaming Powell would be like blaming a car engine for the fault of the car’s transmission.

We leave our simplistic question with Ms. Eisen & Mr. Rosenberg and hope to be educated by them.