After two terrible post-Powell days from 9/16 to 9/18, we did expect Chairman Powell to promise to do all they can in his congressional testimony. He did not. Instead, he simply reiterated his view that this was time for a fiscal stimulus & not for balance sheet expansion.

How did the markets react to that on Wednesday after a minor rally attempt on Tuesday?

It felt worse than Monday. The best reaction came from Jim Cramer who said something like “unless we get stimulus, economy is going back to full Covid mode“.

Cramer’s comment instantly brought to mind the classic frustration of Hamilton Berger* who said to the Judge “The District Attorney has already been thrown out on one of these squeeze plays by Mason to Gilmore to Banks“. In this case, Mason & Gilmore are Pelosi & Powell; Banks is the stimulus and the District Attorney is macro markets. We don’t have the gift of gab like Erle Stanley Gardner and so we simply say “Powellosi”.

We understand that the Fed is the master of the world & they decide what the state of the economy should be. They are absolutely correct in demanding fiscal support from Congress. We can also understand somewhat their threat to hold the economy hostage. But it is unthinkably unbelievable that Powell would that 6 weeks before the most intensely emotional Presidential election in modern history.

Nancy Pelosi is a politician. Her first & foremost inclination is to win the upcoming election. That is why she has steadfastly refused to act on the fiscal stimulus bill betting a bad economy will help Democrats & Biden. But Fed Chairman Powell has the mandate to win for the economy. In this situation, it was incumbent on Powell to act to reduce the damage of Pelosi intransigence and increase the Fed’s Balance Sheet. But he did not. Instead he acted as if he was in cahoots with Pelosi. Hence our nickname “Powellosi”.

But the Fed is supposed to “independent” of politics, right? Honestly, we don’t know anyone who is not intensely fervent about the existential need for victory of their candidate. And the Fed being “independent” – ask someone who has served as an advisor to the Fed: 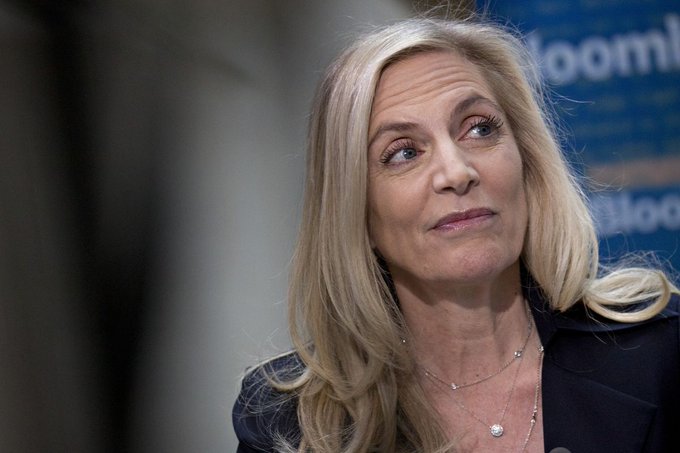 And what risk can there be in fading the economy down just for 8 weeks or so? After all, the Fed can build up their BS fast & furious right after the election. They are the masters of the world, aren’t they?

Are we going too far or does the Fed really rule the monetary world?

*The Case of the Ice-Cold Hands

Was the carnage so bad & did the fear of being punished by voters become so palpable that we saw signs of a U-turn by Powellosi? 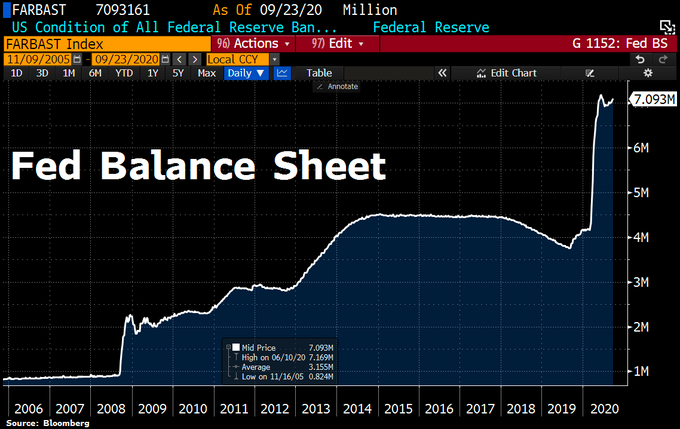 And House Democrats are drafting legislation for a $2.4 trillion stimulus proposal that could be voted on next week. Yes, next week. Wowser! Is this why the stock market exploded on Friday with NDX up 2.34%? Forget the boring slow-poke NDX & its old horses like Amazon & Microsoft that only rise by two-handle percentages. Look how the young studs ran:

Now that’s what we are talking about. Are Happy Days are going to be here soon with both BS increase & Stimulus checks? Is there a message from our trusted indicator for Fed’s realized liquidity?

Not only is the absolute spread at about 35% is close to the March low spread of about 40%, but the RSI of DPG is almost touching the March low. And Friday was the first day in awhile to see outperformance of DPG over HYG. So are we close? We will see next week.

Let’s not forget the primary responsibility of the masters. After all they have “bank” in their names. So what’s up with the kids of Lagarde-Powell? 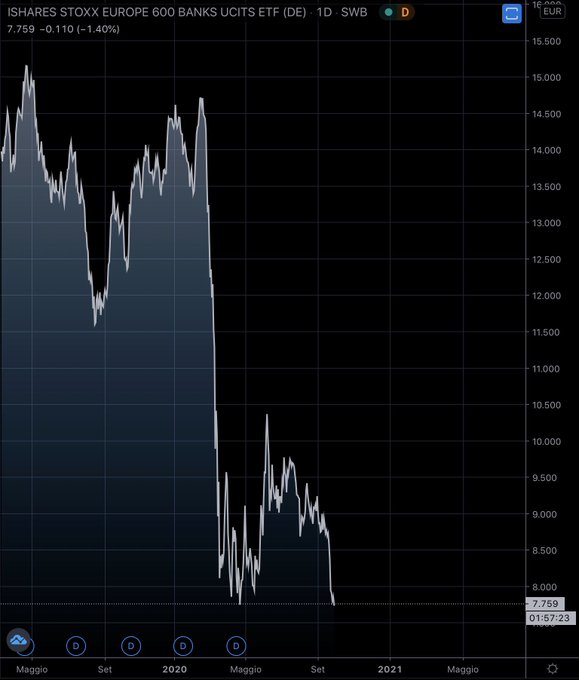 How about a longer view? 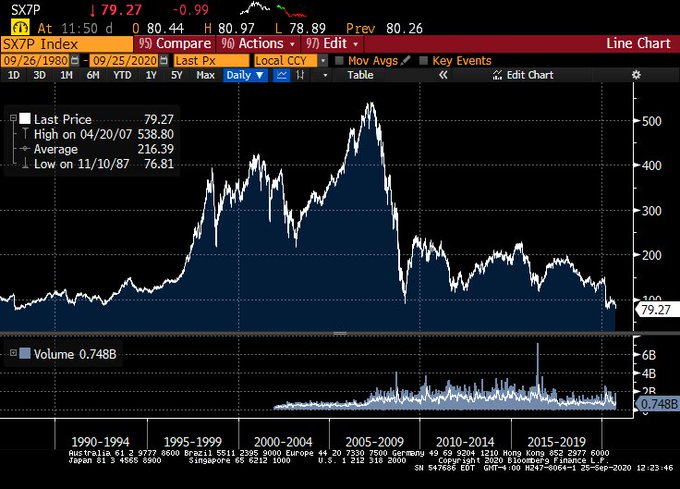 EUFN, the iShares ETF of European Financials, was down 8% on the week. Lest we laugh at them, Citi & Bank of America were down 6.5% on the week. This is looks far worse than ugly. The only non-dark lining we can try & locate is that the RSI of both EUFN & C is touching 20.

But what about the Fed’s drive to “Make America Inflationary Again”? No, that is not ours. 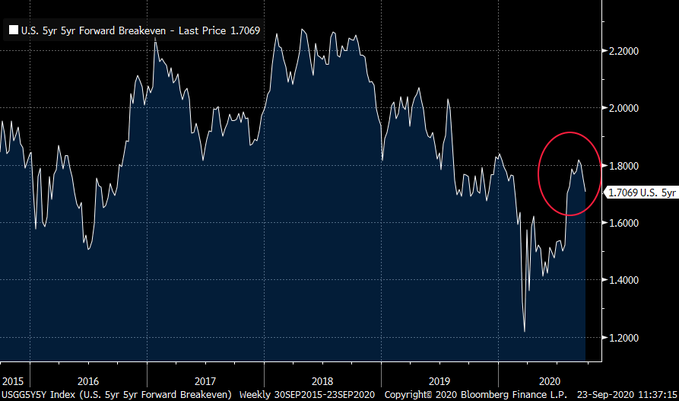 May be this is finally beginning to scare Powell or at least we hope it is. If not, the steady drip drip down of Treasury rates should. 30-year & 10-year rates were down 5 bps on the week and the 10-year down 4 bps to just over 65 bps. What did that suggest to Jim Bianco, the man who told BTV’s Lexington Jo Nathan* that the 39-year old Treasury bull market ended on March 9 when the 10-year yield touched 33 bps intra-day?

As an aside, where can you find quality banks that have loan growth & high interest rates? To the country that deservedly gets bad press for high levels of non-performing loans. No we are not kidding. India’s private banks, especially HDFC & ICICI, are deemed to be long term growth stocks. Just look at HDFC vs. JPM and the higher beta pair ICICI vs. BAC over the last 6 months, a period in which Indian economy has been semi-shut because of CoronaVirus:

Do note that we specify private banks in India not the public-sector banks that are loaded with problem loans.

*BTV’s Jonathan Ferro is no Broadway Joe Namath but he may be called Lexington Jo Nathan. After all, BTV offices are on Lexington Avenue AND Ferro is the only British Fin TV anchor who has ever spoken about football on US TV. And he knew that Jack Kemp was AFL’s MVP in 1965. Does Larry Kudlow know he said that on TV? If he does, then NEC Director Kudlow might give interviews to Ferro exclusively.

A terrific Friday could not overcome terrible Monday & Wednesday. But damage to the broad indices was not terrible with Dow down 1.7% on the week and S&P down 60 bps. In contrast, Russell 2000 was down 4% and EM was down 3.5%. Germany was down 5% on the week, perhaps due to the disaster that are European Banks.

In stark contrast, NDX was up 2% on the week, yes Up. Kudos to those who believed in last Friday’s tweet below & did not puke on Monday or on Wednesday.

OK, but what does he say now? Does he see another decade-high? 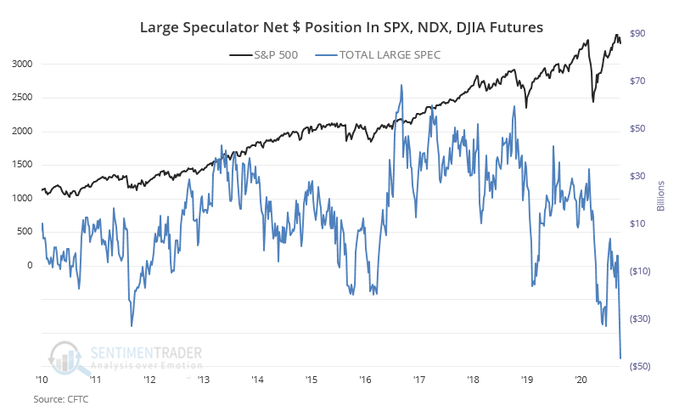 Not so fast, says another: 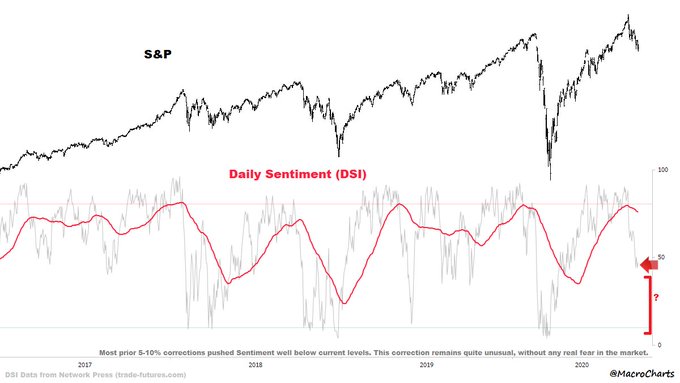 Consistent with this “not yet” is tweet is the message of the legendary Larry Williams communicated by Jim Cramer: