When we celebrated Diwali a month ago, we wrote about a danger to prosperity:

But what gave us hope, a cause for celebration of light over darkness? 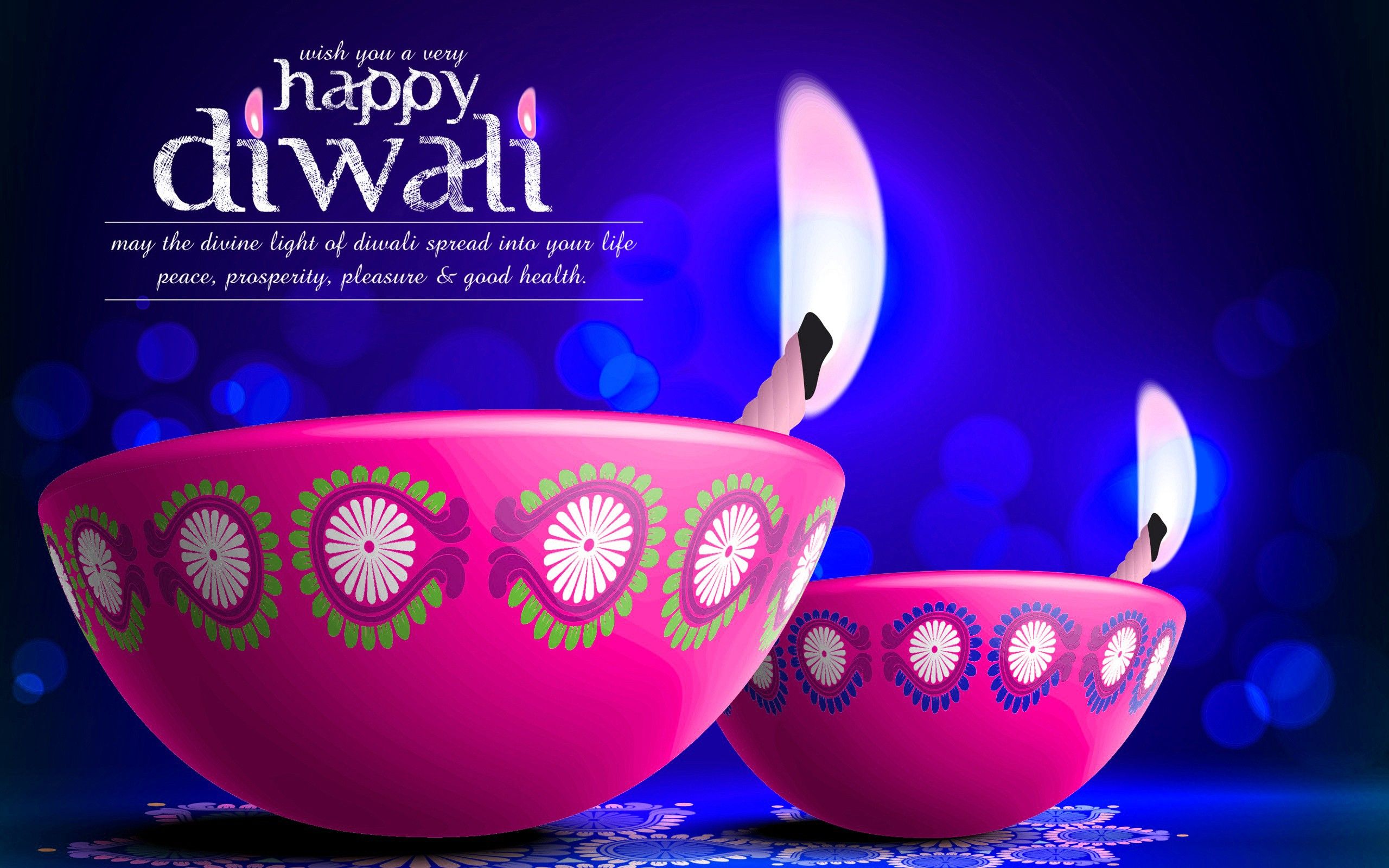 When we wrote the above, we did remember with utter clarity the Powell of Q4 2018, the arrogant, tone-deaf & to-heck-with-American-People Powell. That Powell single-handedly sent the US stock market down 15-16% from October 2018 to December 2018. The ultimate display of that ignorant arrogance came in the press conference after the December 2018 Fed meeting. And the stock market puked, as we wrote on December 22, 2018:

Since a picture is far more eloquent than words, look at the chart from our December 22, 2018 article: 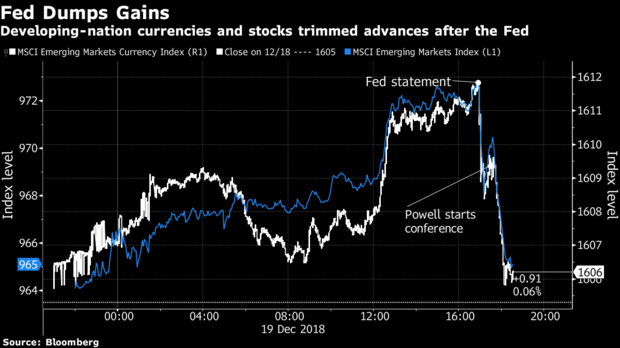 Still Powell did not learn. So we quoted a couple of reactions in our December 30, 2018 article:

Jim Cramer might have been impolite, even rude. But he was 100% correct. Finally Chairman Powell understood and he turned in the right direction in the first week of January 2019. He has been a pragmatic, sensible & a superb Fed Chair since then.  And we all saw that Chairman Powell in his maestro-like performance in the Fed presser on Wednesday, November 3.

The Chairman of the U.S. Federal Reserve has the enormous responsibility of increasing & decreasing money supply, the elixir that leads to economic upturns & downturns. Often we see that there is a tendency towards intellectual arrogance both at the early part of the Chair’s tenure & the later part of the tenure. It is almost like the internal struggle between the benevolence of Dr. Jekyll & the malevolence of his alter ego Mr. Hyde.

Perhaps Chairman Powell got fatigued internally with the fight to remain benevolent in the face of the chorus of those who wanted him to get recklessly tough on inflation & hurt the U.S. economy. Perhaps he snapped under the pressure and pivoted towards what the big billionaire types & their sponsored spokespeople were harassing him to do. Perhaps this fight got too much for him and his internal compassion-less Hyde emerged displacing his  gentle caring Jekyll we had seen since January 2019.

And when & how did Powell display his internal Hyde? On Wednesday November 24, the day before the Thanksgiving holiday & in the release of Fed minutes that ordinary Americans don’t read and that mainstream U.S. media does not cover.

But markets read the minutes and understood the enormity of the turn from Jekyll-Powell to Hyde-Powell. Look what happened on Friday, the half-day after Thanksgiving:

That rout took place because the markets understood that the turn to Hyde-Powell was an enormous risk to the health of the U.S. economy. This rout has continued without much respite since that post-Thanksgiving Friday. Both stock markets & Treasury interest rates have fallen very hard since the turn in Powell was revealed on Wednesday, November 24:

Why? Because Chairman Hyde-Powell reiterated his plans to derail the U.S. economy in his congressional testimony this week on Tuesday November 30 & Wednesday December 1. The dam really broke then:

Look at the 30-day chart below of QQQ, the Nasdaq 100, the leading part of the U.S. Stock Market. You will easily see the high of the market on Monday, November 22 and the steep fall since then:

There is no greater indicator of fear of an economic slowdown than the 30-year Treasury rate. When investors get scared, they run into long-duration Treasuries. When they do, rates fall & Treasury prices rise. Look at the rally in TLT, the ETF of Treasury Bonds, since November 24.

What is particularly disturbing is that this 180-degree turn was never presented to the American people openly in a press conference! Powell has a press conference scheduled on Wednesday, December 15, after the FOMC meeting that day. That is only 11 days away. Why didn’t he wait a mere 11 days? Why did he have to surreptitiously slip in this big turn via the Fed minutes on pre-Thanksgiving Wednesday?

4. Chairman of Fed as a Political Appointee?

Many may not know that the  current term of Chairman Powell ends in early 2022. So either he needed to be re-nominated by President Biden or replaced. Many in the Democrat party dislike Powell & wanted him replaced by Dr. Lael Brainard.

This is a big deal politically because elections depend on the state of the U.S. economy and the Fed Chairman is the one that governs the economy. Everyone remembers how senior President Bush blamed his loss in 1992 on the refusal of then Chairman Greenspan to lower interest rates in 1991-1992.

President Biden & Democrats have the opposite problem in 2022. Inflation has exploded from 1.4% at the start of 2021 to 6.2% currently. What has that done to President Biden’s popularity? Look at the chart below from The Market Ear: 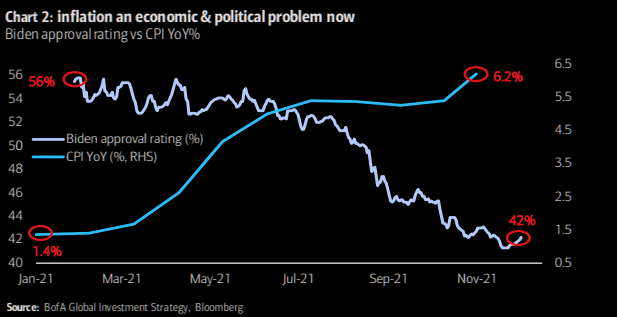 So what do you think President Biden & Democrats want from the Fed Chairman in 2022? Get tough on inflation & bring it down was priority one, we guess.

For those who don’t know, Fed Chairman Powell has so far dismissed inflation pressures as “transitory” and refused to tighten financial conditions. And he has been right. As noted economist David Rosenberg pointed out this week,

Just look what happened last week. On November 22, President Biden announced the re-nomination of Fed Chairman Powell and, on November 24, Chairman Powell surreptitiously slipped in the Fed’s change to  “Whip Inflation Now” policy in the Fed minutes (released late afternoon before Thanksgiving). And then  Chairman Powell reiterated this new & revised fight inflation above all policy in his congressional hearings.

This reminds us of Faust, a successful erudite scholar, who made a bargain with the Devil to get his help with magical powers for a number of years & in turn the Devil could claim Faust’s soul.

5. A Faustian Bargain that fails for all?

Guess what Chairman Powell seems to have agreed to do in exchange for his re-nomination? Read what  Larry McDonald, founder of Bear Traps Report & a best selling author of A Colossal Failure of Common Sense, said on CNBC on Friday:

Think of the enormity of this. Has Chairman Powell agreed to do all this damage to the U.S economy & the U.S. household wealth by fighting a war against an already waning inflation threat simply to get President Biden to re-nominate him? If this conjecture of ours is even remotely true, then this is a destructive Faustian bargain in the classical sense. It could permanently damage the reputation of the Fed as a politically independent organization with serious consequences for the trust in U.S. Dollar & the American financial system.

We urge Chairman Powell to remember the lesson of the early Faust tales, that “Faust is irrevocably corrupted and believes his sins cannot be forgiven; when the term ends, the Devil carries him off to Hell“.

We now know that the hasty retreat from Afghanistan happened because of a near-term political need. And,  instead of helping President Biden, it caused almost irrevocable political damage to him & Democrats.

We urge President Biden, Democrats in the Congress & Democrat strategists to consider the damage to them if this new “hit the U.S. economy” campaign to fight inflation creates a slowdown in the U.S. Economy. The collapse in the Treasury rates is a huge warning sign the way it was in late 2007. No party has won in November when pocketbooks of American voters got emptier in April-June.

From what we understand, the final decision to re-nominate Powell was taken to also keep the stock market at peace. Wouldn’t it be ironic if the Powell re-nomination & his Faustian bargain create a 20-30% drop in the U.S. stock market as Larry McDonald warned on Friday?

Hopefully the newly re-nominated Chairman Powell will surprise us all again by reverting to his Jekyll self and re-becoming as non-hawkish as he was on November 3. That might also prove to the best for President Biden & Democrats.

If he does that successfully, then perhaps a modern Goethe can write another tale of the wily Faust sealing his bargain with the Devil, getting what he wants & then rejecting the bargain by discarding the Devil.

Editor’s PS : Below is the clip of Mr. McDonald’s comments on CNBC: