It was such a nice week, wasn’t it? Pleased just about everybody except, of course, the mal-intentioned:

Diverse sectors like Financials, Materials & MMAAN were nicely up:

And EM also joined the party:

A joyous week for almost all! But what was the trigger? Yes, we had outlined charts & positioning stuff last week. But that was present the week before as well. To our simple way of thinking, it was the absence of the two biggest negatives. Recall what had stamped out previous attempts to rally. The Fed talkers had always come out and stomped all over stocks. Their partner had been strong inflation data.

But this past week was a black-out week for the Fed. So after the speech by Waller on Thursday July 14 afternoon, the mouths & mikes of the Fed talkers were silenced. And the bad inflation data was behind us at least for a couple of weeks. So we wondered last week whether, with the two biggest enemies of stock rallies on the sidelines, stocks might raise their heads up without lot of fear?

OK, but what now? There is no shortage of experts who said all week that this was a rally to sell, if not now then absolutely at 4,200 & probably even at 4,100. They could be right. But we are in a good mood & so we thought we would begin with positive thoughts – from a couple who, while not in the league of Mr. Fields,  are W.C. nonetheless.

We refer of course to Williams & Cramer. We heard from them on Tuesday, July 19 after the 754 point rally in the Dow. To quote Jim Cramer:

Watch the clip below, at least for the charts of the patterns:

Last week we had featured a chart from The Market Ear about the lack of participation by Systematics. That may change next week:

That would be on top of the monies that have come in already. J.C. Parets pointed out in his email on Thursday July 21 that,

Since a picture is better than words, 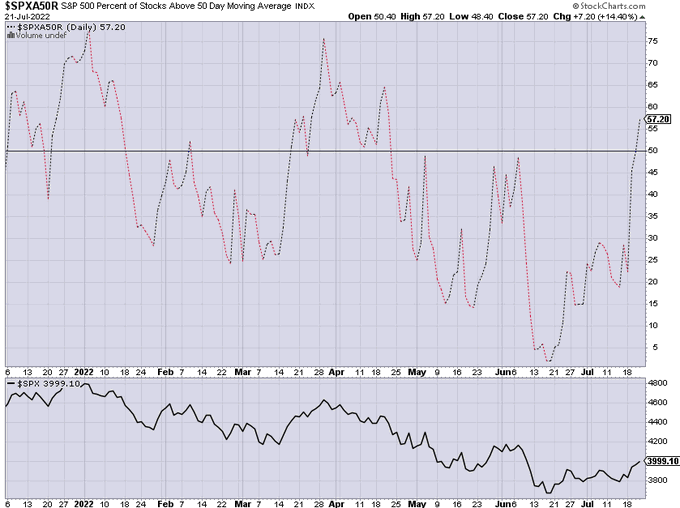 And VIX fell 5% on the week to close at 23.03. And VIX also fell below its 200-day moving average, as Lawrence McMillan of Option Strategist pointed out:

But the same fact suggests a big warning to some:

Whether a warning or not, we do seem to have reached an interesting juncture: 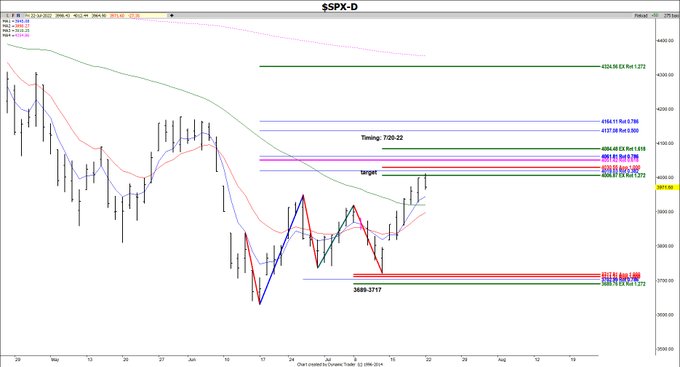 Chris Verrone of Strategas was negative on July 21, especially on the Semis.  He was joined on July 22 by Jonathan Krinsky of BTIG who said, among other points,

The above are opinions in contrast to one fact – the ending of this past week’s Golden Silence. It will be replaced by a global megaphone via Powell’s presser on Wednesday, July 27th.

2. Interest Rates – “all data has been crummy”

Last week it felt to some that everyone was talking about Treasuries, an overbought sign. And that is how Treasuries acted from Monday to Wednesday. Then came Thursday, the day Santelli said “all data has been crummy“. Not just crummy but momentously so, even without talking about what the ECB did. And the data created a turn in Rich Bernstein’s skepticism about a slowdown: 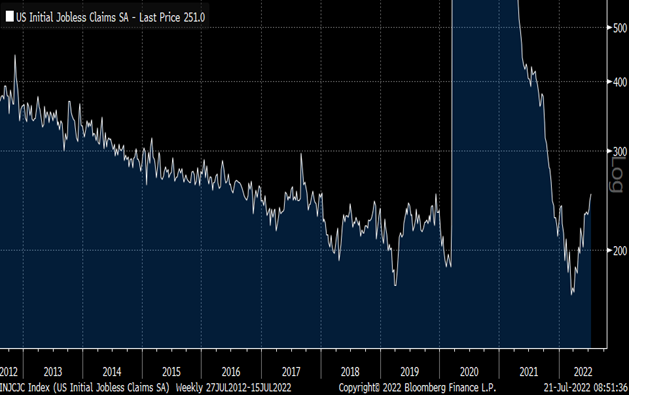 Then came the Leading Indicators Index. And it brought the R-word closer not to Rich Bernstein but to Bespoke: 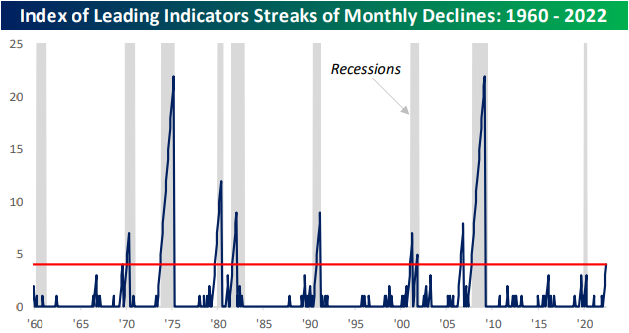 Then came the L-word from the man who knows more about that Lehman than anyone else: 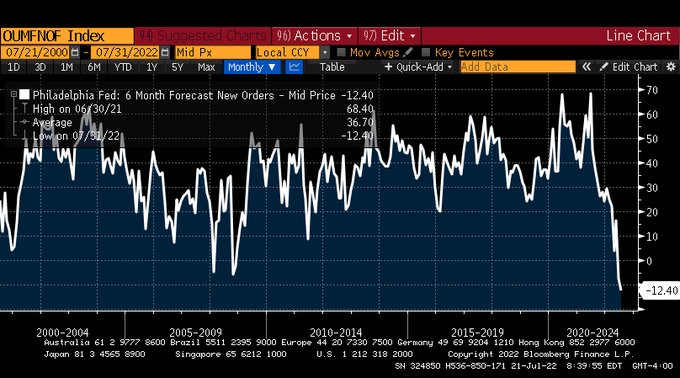 That sent Treasury yields streaking down in double digits with the 10-year breaking the 3% barrier with a 13 bps down move to 2.90%.

That brought us to Friday with another double digit down day for Treasury yields thanks to the preliminary ISM figure.

That erased the rise in Treasury yields from Monday to Wednesday to close the week emphatically down:

Is that it for TLT? Not according to Chartmaster Worth of CNBC:

But his might be too modest a target if the big driver for lower yields materializes.

USA & Europe together have 60% of Global GDP. What happens to Global GDP and the global economy when both USA & Europe are in simultaneous recession? But that is so hypothetical, isn’t it?

But what about the rest of the world, like EM? 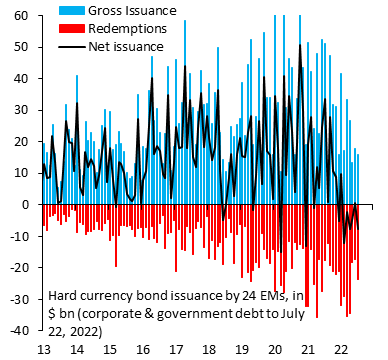 So far this is just plain economics. And we all saw this back in 2012-2013, right? That was because the southern European countries (PIIGS) were in trouble & Germany was rock solid. That was not hard to fix. They just made Draghi the Chairman of ECB and he declared he would buy every single PIIGS bond that was in trouble. Germany backed him and the crisis was over.

They can do the same thing now, right? But wait, Draghi just resigned as Prime Minister of Italy & Italy has announced new elections for September 25, two months from now.  And it is not the same Germany either. It is not led by the powerful determined Merkel who was the acknowledged leader of Europe. This time it is Germany that is in severe trouble, not the southern PIIGS. It is a Germany that may not be able to provide both lights & heat to its citizens this winter.

Yes, the ECB did raise interest rates by 50 bps this past Thursday. That was a day of relief. Then came Friday and German interest rates fell as if in a catastrophe. The German 2-year fell on Friday by 26 bps, from 65 bps on Thursday to 41 bps at Friday’s close. It was this disaster that drove the Treasury yields into a waterfall decline.

That is what happens when a central bank tightens rates into a falling economy. 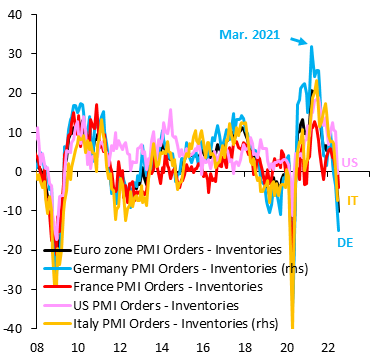 Is there any way to stop the rout in Europe? Yes – Get Ursula to resign & make Mario Draghi the head of EU with the carte blanche to do whatever he thinks is best for Europe.

The Golden Silence ends on Wednesday with Powell’s presser after the FOMC statement. This may be the most important presser of his tenure. What is at stake is the policy, direction and style set by Bernanke Fed after the 2008 financial crisis – the conviction that wealth creation is the key to the growth of U.S. Economy with its subsequent trickle down via consumer spending & spending influenced employment.

In contrast, what has Powell done so far this year? 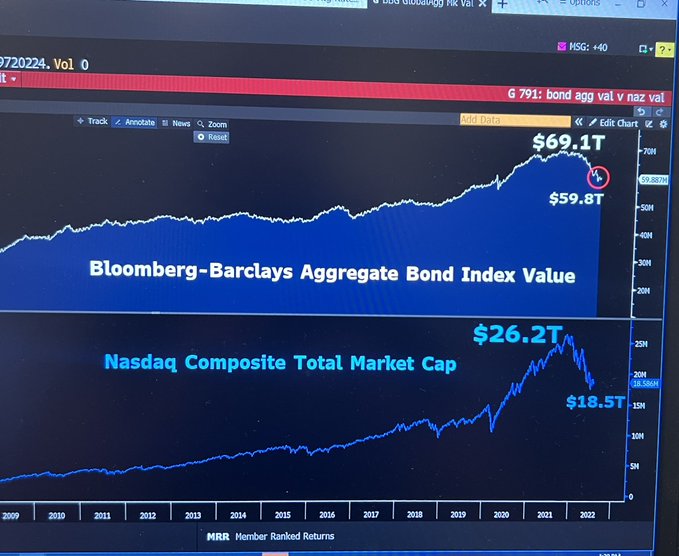 But all this is probably irrelevant to what the FOMC will do next week – raise rates by 75 bps. Markets know this & expect it. But Chairman Powell has been a maestro in his pressers. So what if Powell actually appears to hint about a data-dependent policy going forward? If not in September but at least by November?

We saw how rewarding Fed’s silence was this past week. How rewarding might Fed’s newly embraced data-dependency prove next week & even the week after? No harm done if the inflation data keeps coming in hot, because the Fed is already set for at least a 50 bps increase in September. But if the payroll data disappoint & the inflation data even hint at receding, then the hint of data-dependency of the Fed would prove to be the sensible  path, right?

We do believe that the U.S. stock market is holding its breath with this hope. If the Fed hints at data-dependency, the stock market might do what Larry Williams, per Cramer, says it has done historically. If the Fed proves as dumb as the ECB was last week, then first 3,400 & then 3,000 might be in the cards before the November election.

We believe that Chairman Powell was disturbed by what happened to interest rates after the ECB raised rates this past Thursday. We doubt if they want a repeat performance in American credit markets. On the other hand, the Fed is ultimately all about its public standing!