A smallish beat in the Non Farm Payroll report seemed to do the trick. 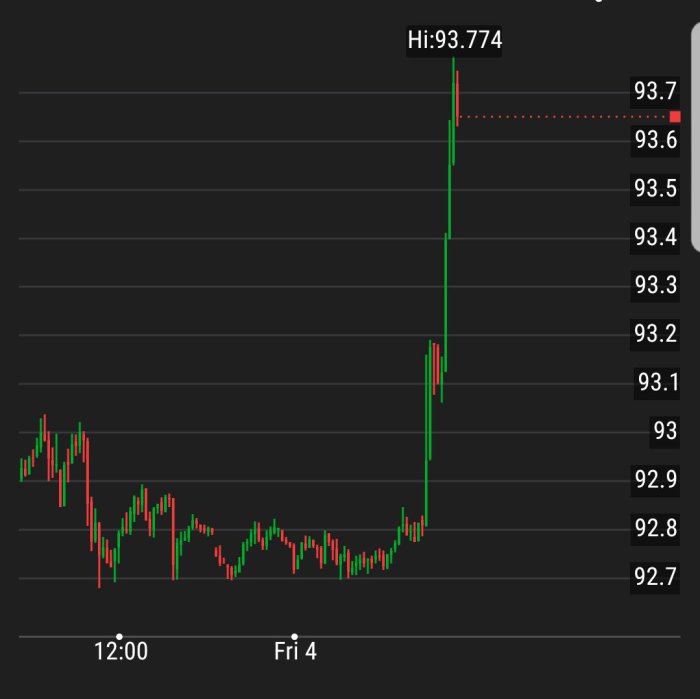 On Friday, the Dollar rallied by almost 80 bps; Treasury yields rose, Gold-Silver fell, the Russell 2000 outperformed the Dow, S&P, Nasdaq & EEM. This was a reversal of not just this week but of the past two weeks.

Built into the above two is the outperformance of the Dow Jones over the S&P.  Is that solely due to a few high price Dow stocks rallying hard or is there a message in there? One view seemed negative:

There is no question about the consolidation action in the S&P or about the negative action in the Russell 2000 of the past two weeks. Thursday’s close seemed particularly bad leading the normally bullish Tony Dwyer of Cannacord Genuity to point out that the Russell 2000 had broken below its 50-day while the Dow made a new all-time high. That has meant, Dwyer said, a median decline of 1.5% in 79% of such cases.

Friday’s action did seem to shine a different technical light with the Russell 2000 coming awfully close to regaining its 50-day average; the Transports bouncing off their 200-day and the Dollar making a double bottom off of an oversold condition not seen since 1978 per Tony Dwyer.

But nothing has changed looking at it from a two-week view – Dollar is still a little lower, the Dow is 500 points higher, S&P is a bit higher, both Nasdaq & NDX are lower, the Russell 2000 is 1.7% lower (was that the median decline of 1.5% described by Tony Dwyer?); Treasury yields are still higher; Gold, Silver & Oil are all higher.

So while the Dollar, Transports have bounced off important levels & the Russell 2000 is close to doing so, the jury is still out on Friday’s bounce.

We don’t think Gundlach was referring to the below when he mentioned “mood” in his tweet above. But it is an interesting indicator! 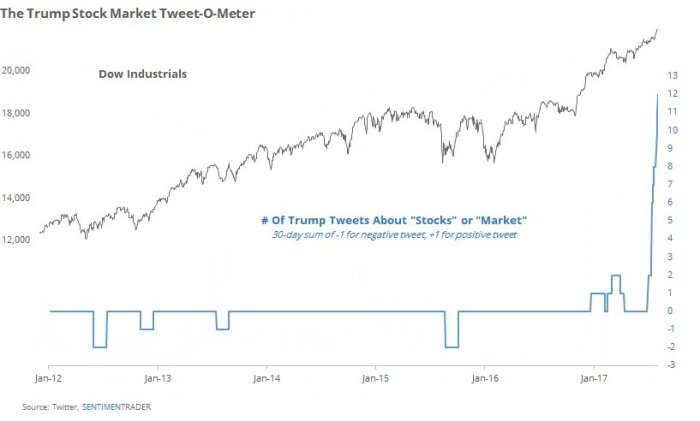 Gundlach is also right, we think, in saying things could end very badly. But when? Because even a bearish indicator is suggesting we have a couple of months or so. 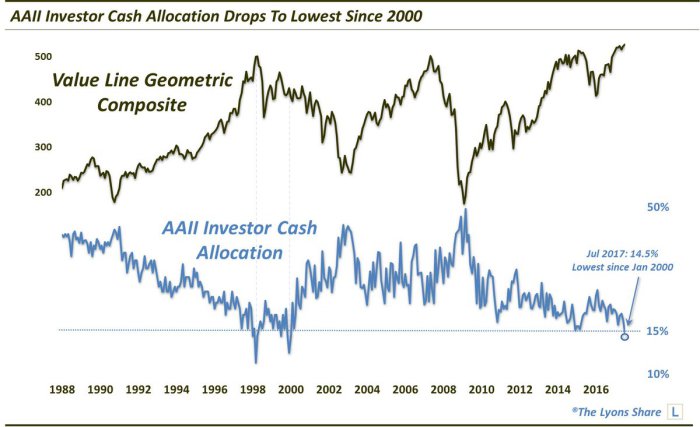 Note that in all these previous cases, the real decline didn’t start for a bout 3-6 months after the lows in Cash.

Our own posture is to wait till next week to see if Friday was a real bounce or a one day wonder. No point opining or charting until then.But if we are forced to make a bet for early next week, we would bet on trades that reduce the divergence of the past two weeks – Russell 2000 outperforming SPY, SPY outperforming Dow & Dollar rising.

The Scaramucci-Priebus theater seems so old doesn’t it? Nobody is talking about it anymore. And it was only a week ago. The new White House regime led by Chief of Staff Kelly seems so much better, doesn’t it?

That has been the reality of the Trump campaign & now the Trump Presidency. Think back and you will see every reorganization has come with an emotional & media explosion and every one has lead to a better outcome. Manafort replacing Lewandowski led to a successful Republican convention. Then came the Bannon & Conway hire after a media explosion.

Thinking about this graphically, you see that the Trump journey has been an ascending step function with each step higher than the previous one. It is just that the jump from one step to another comes with a highly theatrical event with an emotional climax.

Think about this Step Function analogy when the next event strikes & the media explodes into an emotional frenzy. This analogy will let you enjoy the theater without getting perturbed.