1.What Timing? What a signal?

A wonderful week was about to end; the Dow was up 230 points at its high intra-day and about to cross over the 2740-2750 resistance; the fear index looked as if it was going to close at its lows of the week. And then boom! 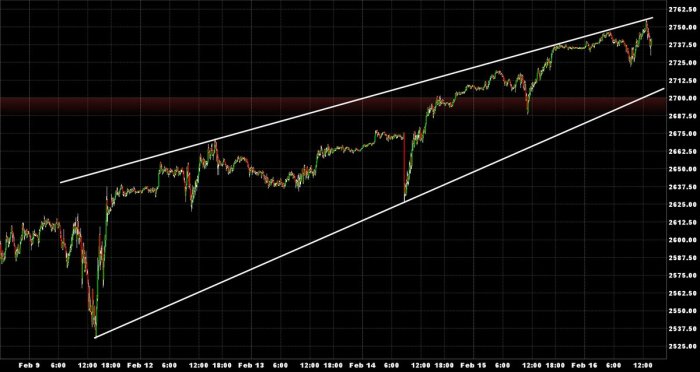 The news hit the tape that indictments were going to be announced by Deputy AG Rosenstein in the afternoon and stock indices fell out of bed. The markets recovered some when it became clear that only Russians were to be indicted and not any American with sensitive political connections. Another recovery took place after Rosenstein’s comments. But the reassurance was only about that specific indictment. So how many would go into a three-day weekend with the specter of more announcements hanging over their heads? No wonder the Dow was up only 19 points at the close.

But that insertion of concern on Friday afternoon cannot take away the superb signal given last week by Fidelity Investments. As we wrote last week:

Looking back is always great but what about next week? Is there more room left for $VIX to fall next week? 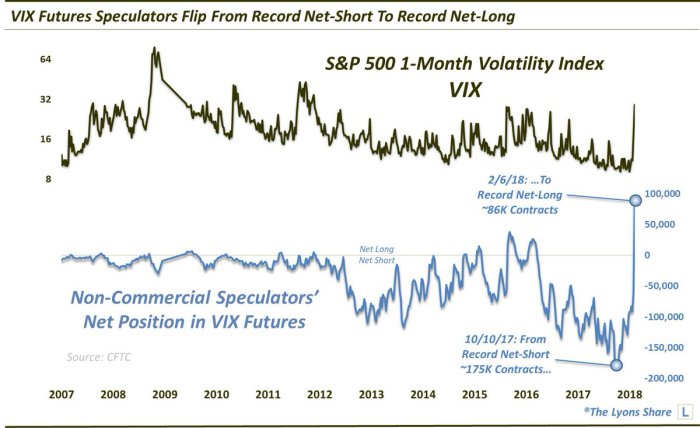 It is not clear how many of these “record” long positions have been liquidated in the past couple of day. But the mere definition of “record” indicates a further potential for liquidation and hence for $VIX to fall.

Our contention has been that the movement in $VIX is more connected with the movement in SPX than any other indicator. That should continue, we think, until the froth in $VIX positioning is unwound. As Lawrence McMillan of Option Strategist points out in his Friday’s summary:

Perhaps, an unwinding of the record long positioning described by Dana Lyons will end the volatility uptrend, barring another “news” of course.

What about the other “cause” of the steep fall in stocks since February 2?

Remember the 2.9% wage growth rate in the Non-Farm payroll number that scared investors on Friday, February 2? By Tuesday, February 13, a school of thought argued that the reality was not as strong as that number reflected. The hot CPI shook everyone out of their comfort zone on Wednesday, February 14. Not only did rates shoot higher, but look how the hot CPI burnt S&P futures? 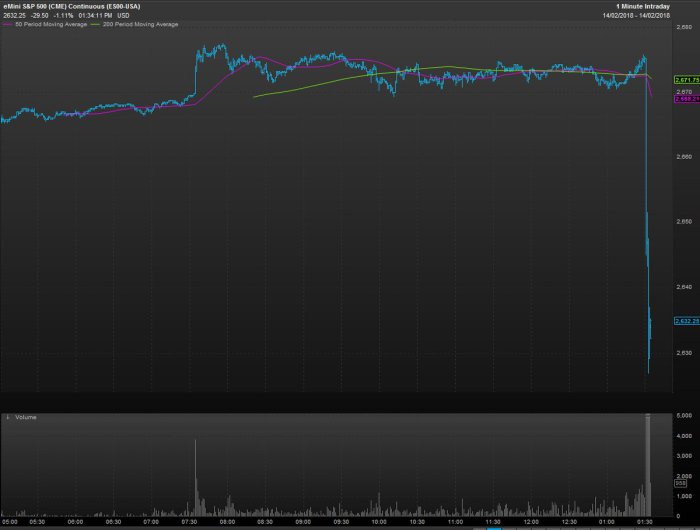 But the real surprise of Wednesday was the V-bottom rally in US stock indices. The Dow closed up 253 points; S&P closed up 36 handles and the real hero of the day was Nasdaq 100 which closed up 121 handles or 1.85%. So a rally fueled by falling VIX was not going to be hampered by Treasury rates going up.

But as the VIX decline fuel runs out, can a fall in Treasury rates serve as new fuel for US Stocks? Perhaps, but who expects Treasury yields to fall in the near term? Actually a few do: 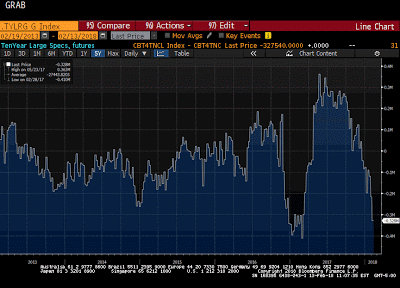 The 5-year yield has also reached an interesting level: 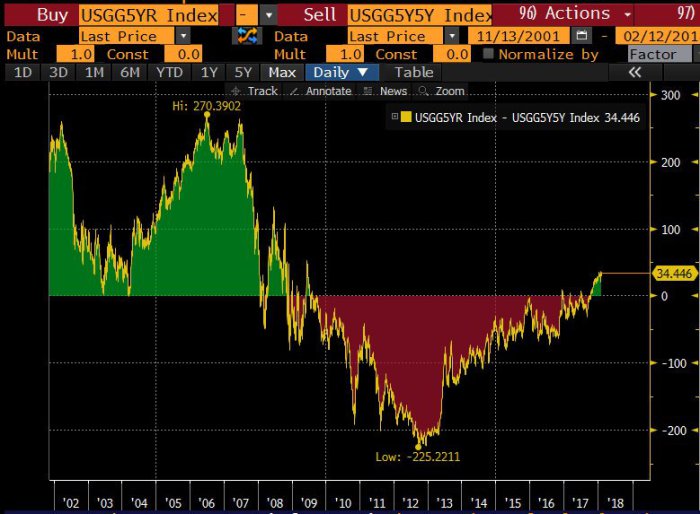 But was any one ready to utter the Capitulation word, we wondered. Well, some one did on Thursday and on Friday. Larry Mcdonald ( @Convertbond ), the man with a proven Capitulation model, stepped forward & took a pause from his public Bond Bear message to call for a sustainable rally in Treasuries. This rally could last for a month or so, he said. But that is merely a pause before the real rate rise quake hits, McDonald warned.

Not only are Treasuries in an interesting spot, so are Municipals: 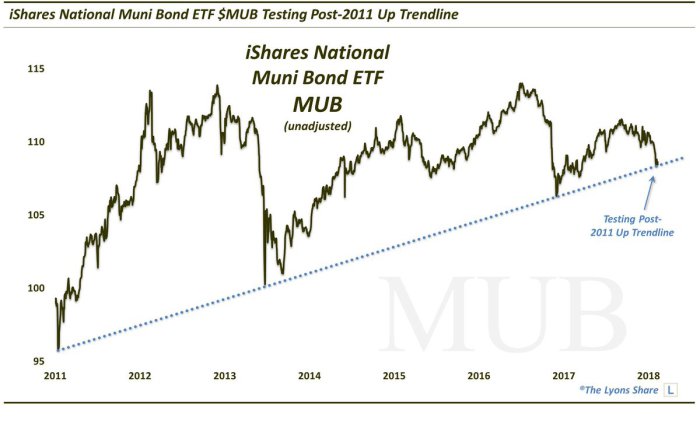 If $VIX continues to decline and Treasury rates also decline, then wouldn’t that be positive for US Stocks? On the other hand, look where the S&P is at the end of this week:

On Nonfarm payroll report Friday, February 2, the S&P fell through its 20-day moving average. Now after a glorious 6 day rally, the S&P sits just below its 20-day. Even simpletons like us know it has to break above the 20-day line and above the 2800 line from where it dropped. Does it have the fuel to do that? The 2750 level could prove to be a big one and then you have the 2800 level from which the S&P fell vertically. There could be a good deal of congestion at that level.

There has already been one push back at 2750: 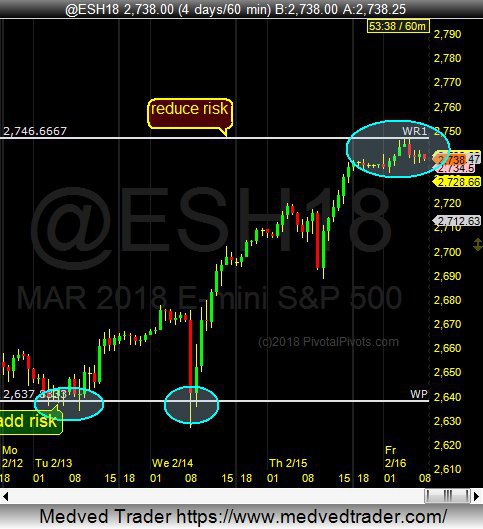 Also the S&P has retraced about 61.8% of the decline from the peak. So given the magic of Hemachandra-Fibonacci numbers, this would be a natural level for the S&P to back off.

On the other hand, what if people come to the conclusion over this weekend that the Mueller investigation is not going to touch either President Trump or his senior team? That plus a fall in Treasury rates might give a two-handed push to lift the S&P above the resistance.

What about FANGs? There too, we see a difference in opinion among technicians: 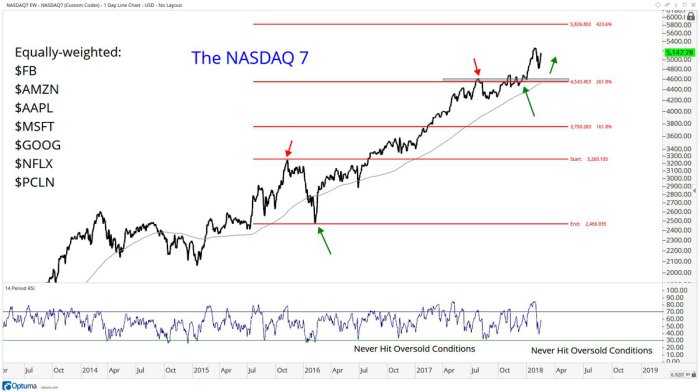 The biggest unspoken & un-understood story in markets is the behavior of the US Dollar. Yes, the Dollar did bounce hard on Friday. But it was down 1.4% on the week. It is hard to speak about commodities without discussing the Dollar. So all we do here is simply share some charts & opinions from experts: 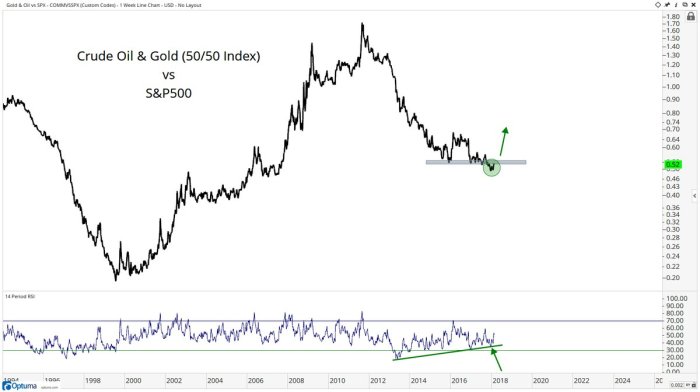 And about Crude as stand-alone trade?