What is the state of inflation since it is supposed to be relevant to the Fed?

What about those who say “no recession”?

Since the European economy is in a worse condition, it may be worth asking what’s next for Europe? 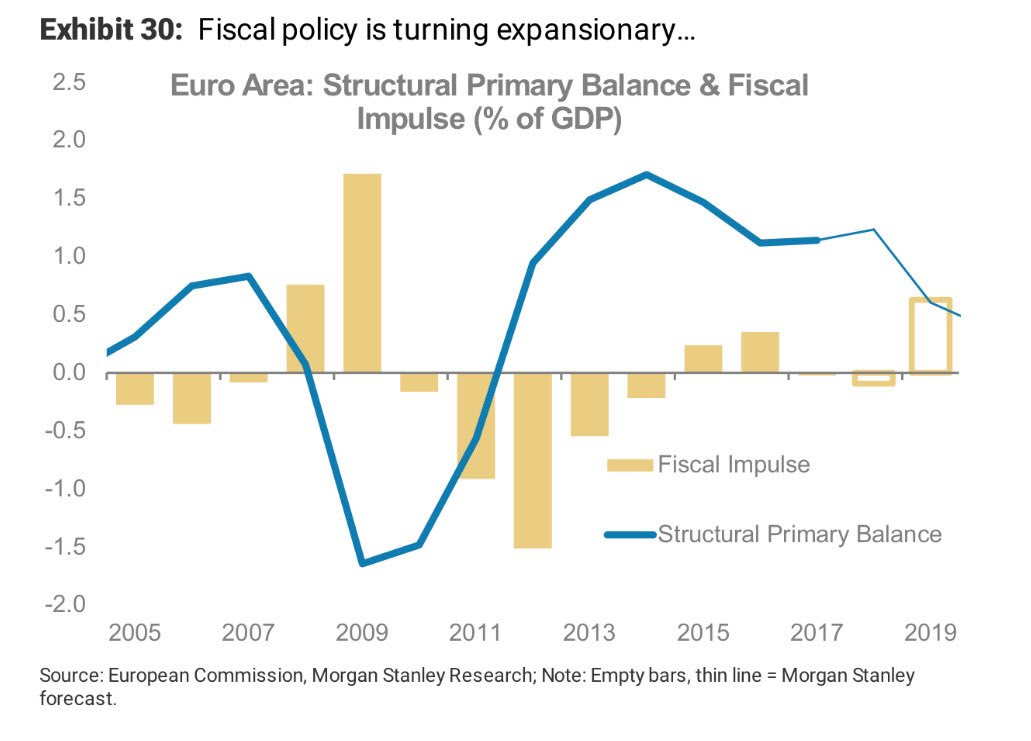 Hmm; is the Fed likely to follow? A reliable indicator is supposed to be steepening in the spread between the 30-year yield & lower maturity yields. 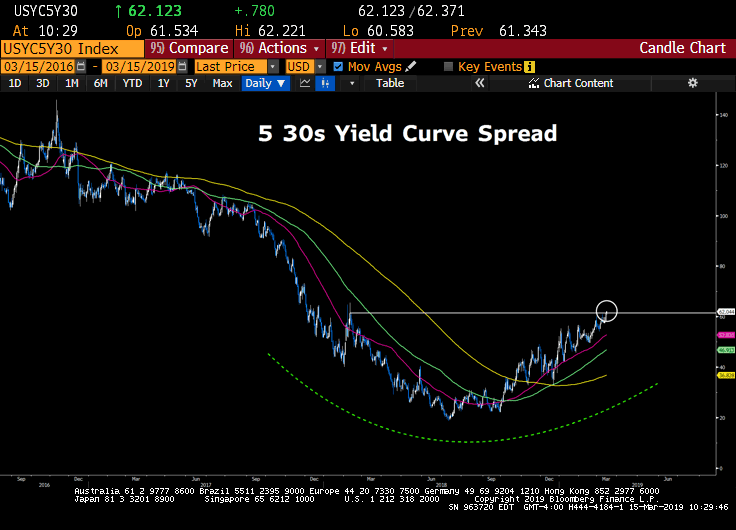 Not merely the belly of the curve but even the 10-year. 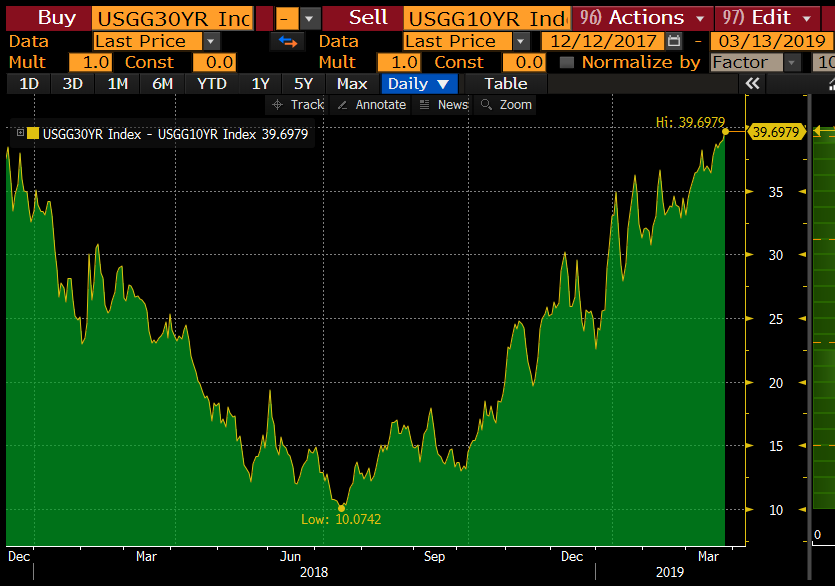 And this is not happening in a bear market for rates. The 10-year yield broke below 2.60% on a weekly close on Friday. This takes it closer to the 2.55% level of Rick Santelli. If this level is broken, the 10-year yield would make a closing lower low for 2019.

On the other hand, if the 10-year bounces hard from close to the 2.55% level, then it could form a double bottom.

Into this significant inflection point steps in Fed Chairman Powell on Wednesday.

The only one who can fix this inversion is Fed Chairman Powell. The big question is whether he signals a modicum of hawkishness either in the FOMC statement or in his presser.

Some, like Eaton Vance Management’s Andrew Szczurowski, predict that “the Fed could instead lift interest rates once or even twice this year and then “three more for the cycle itself,”” adding that “it’s not unreasonable” for two-year Treasury yields to climb back toward 3 percent by the end of this year. 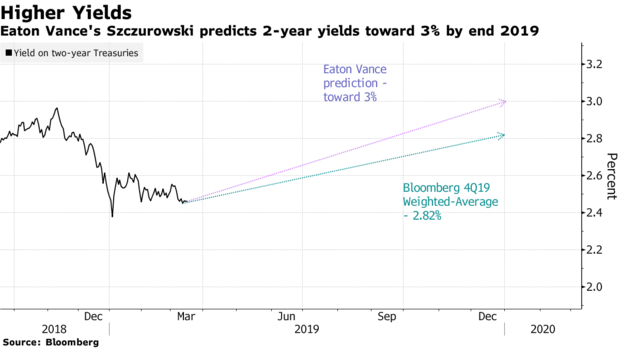 Not just in US but also in Europe: 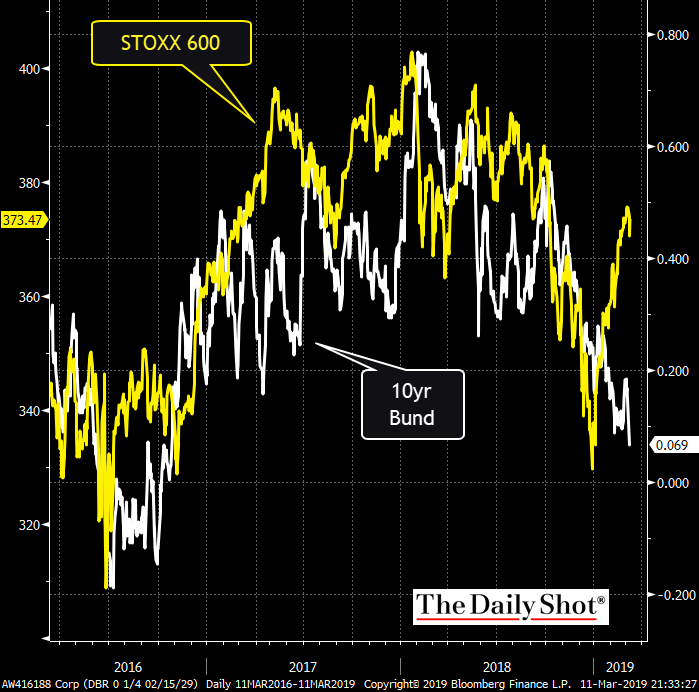 Draghi & his ECB are not getting hawkish any time soon. So what happens to the US Dollar if Chairman Powell surprises the markets with a greater hawkish stance than expected? 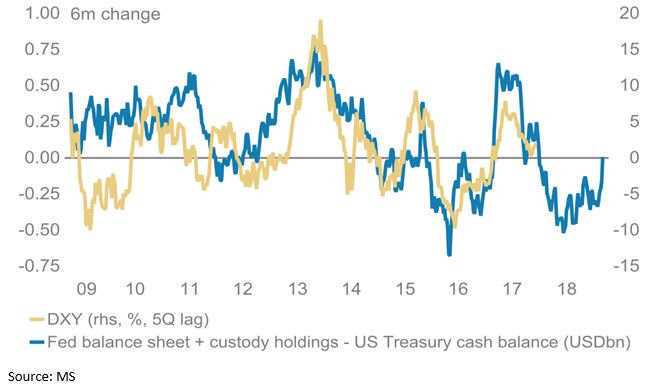 We see that all the markets are signaling that the Fed has become “patient” or withdrawn to the sidelines. Will Chairman Powell tell us they are right or will he dare to surprise them even a little even to gently suggest a rethink at the June meeting?

Is there any indicator that is even raising its head to suggest a hiccup courtesy of the Fed? 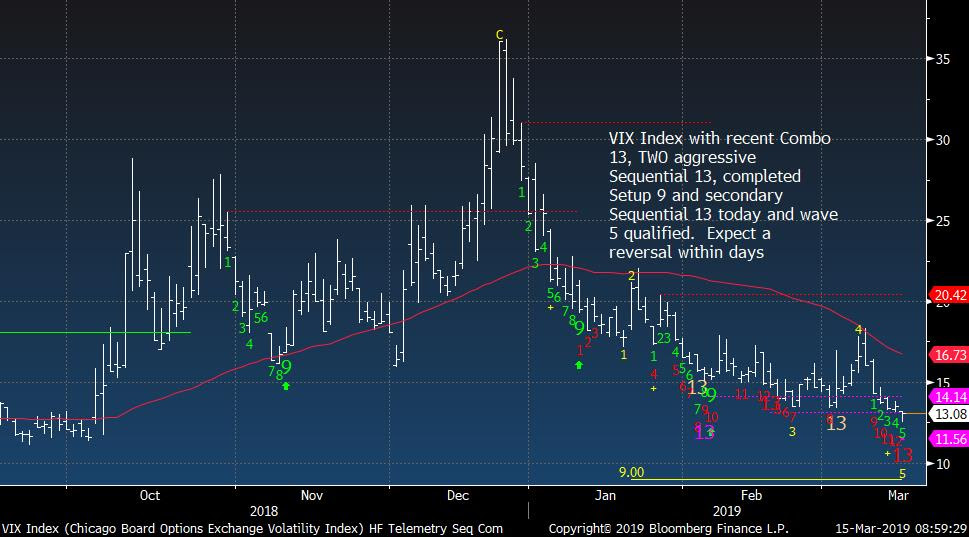 Then you have the history of $VIX: 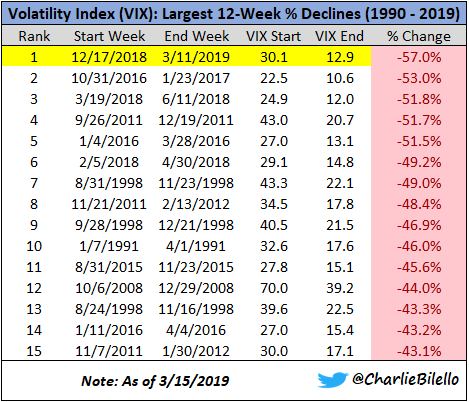 How would a trader express this? 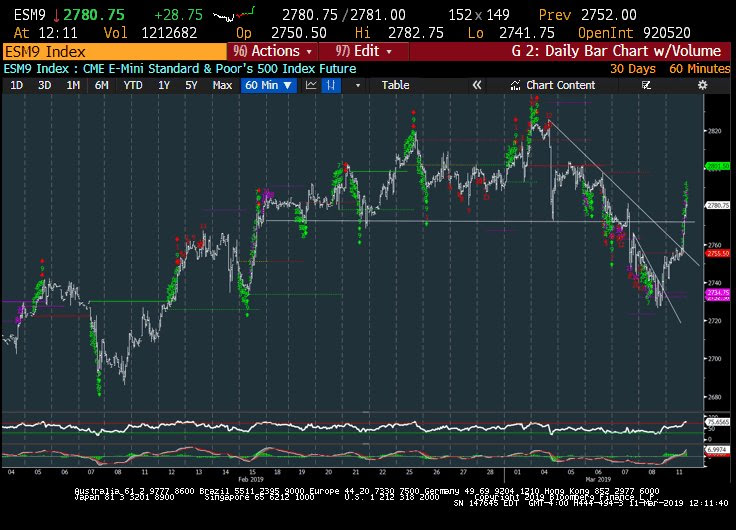 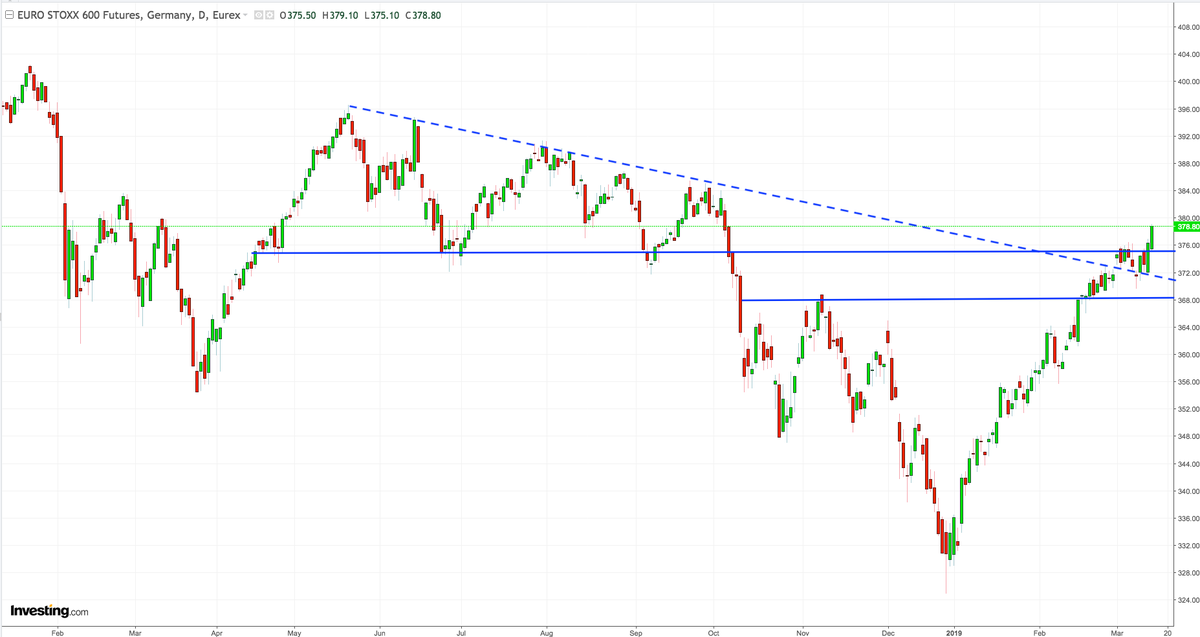 That brings us to the man who was so right last fall. Mike Wilson of Morgan Stanley said he would buy any real decline (not the 2% step back of the week before) he sees.

That brings us to new highs, perhaps? 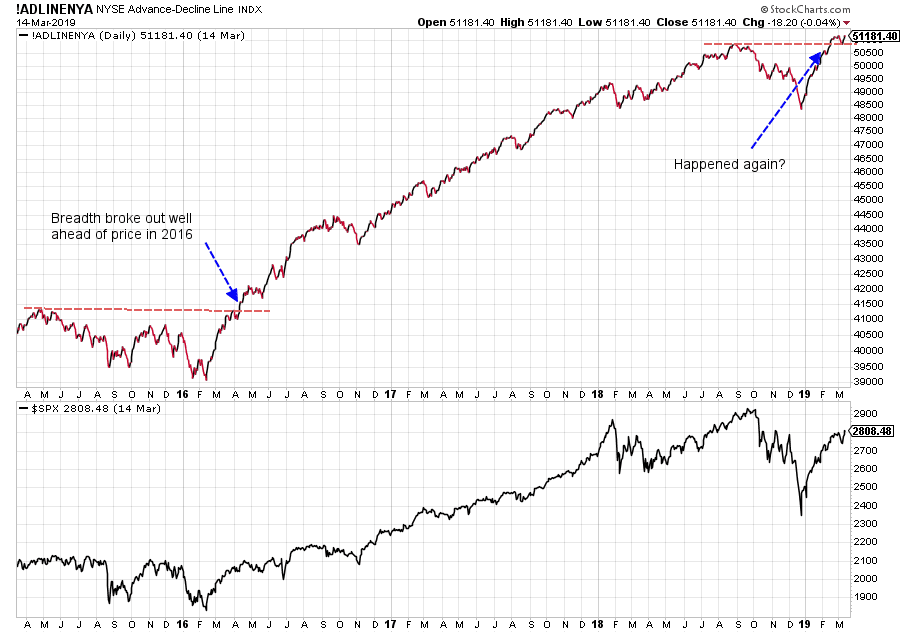 For the 2nd week in a row, the Indian Stock market rallied furiously with EPI, INDY  up almost 6% on the week, doubling the performance of EEM & S&P for the week. Remember the air attack on Napak terrorist camp was on Feb 26-27. Look at the rally during the two weeks after the attack both in absolute & relative terms:

For a more detailed discussion see our adjacent article – Propulsion From Balakot To A Second Term For PM Modi? That brings us to President Trump.

Almost everybody realizes that PM Modi broke out of India’s self-confined posture against Napakistan with the Balakot strike. But very very few realize how the Trump Administration broke out of America’s self-confined posture about giving in to Napaki game of nuclear chicken. A big part of that is President Trump & his carefully constructed image. As Ashley Tellis of Carnegie wrote this week:

And, in contrast to other situations,

Now you understand why Mr. Gurumurthy publicly thanked President Trump in his tweet for the release of Indian Wing Commander Abhinandan.

But where is the break from the previous US policy?

Without a clear & present danger to their sanctuaries, the Taleban have no reason to deal with America as they are winning on the ground. And without an existential danger to the Napaki military leadership & their families, Napak will not cease to aid the Taleban. And an unsuccessful exit from Afghanistan will end up haunting President Trump even more than the hasty exit from Iraq haunted President Obama.

We have been looking at the recently disclosed college education “scam” from two separate angles. First & foremost, we have known how screwed up the process is. Any one who knows something about private schools in Manhattan knows about admissions to elite schools – you almost require parents or more commonly grand parents who donated huge sums to Ivy League schools when a couple of million was deemed huge. And if you are an Asian minority, you know you have to stand out among other Asian students. You should know what schools really want – like know that Harvard really wants athletes & not 800-score students.

Every one knows the huge amounts Manhattan parents spend to improve SAT scores of their children without much success. In that sense, the “scam” was more sensible. Instead of spending money on middle men, they spent money on the actual decision makers, like say

All this sounds awful from the traditional American viewpoint. But the reality is that traditional viewpoint went away during the elitism of the Obama Administration. President Obama was an elite & elite-created product. He reveled in it & elitism grew exponentially in his 8 years.

And the absolute foundation of elitism is credentialism. That is behind this scam. Regardless of your Hollywood or other celebrity (say Pimco) status, you must have the right name (credentials) behind your child. The actual education is irrelevant. What is critical to say is that your child went to Harvard or Princeton.

Indian American parents know how extreme such credentialism can get. For example, in some Indian-American circles in Manhattan, Columbia University is just not “Ivy League” any more at least not elite “Ivy”.  Your child must go to Harvard, MIT or Princeton (Yale is border-line, Stanford counts but is too far) for parents to feel proud. If Columbia is infra-dig, what about Brown, Cornell et al? Not quite untouchable but kinda close!

And understand Indian-Americans are really not at the forefront of such Indian elitism. That is reserved for children of wealthy Indian parents from India. For example we have heard that, even at non-elite NYU, such wealthy Indian children from India do not associate with Indian American students. These “elite” Indian kids from India stay in expensive townhouses & bring/employ cook/maids to serve them while they “study” in US schools. So do you really think, these kids or their parents worry about tuition fees or any other payments for them to get in?

And yes, all US schools put Indian-American applicants & Indian kids from India in the same admission bucket. This has curtailed acceptance rates for Indian American children at MIT, Princeton & other elite schools. This is not theoretical but based on actual cases.

So the “scam” itself is not that novel but there is a novelty to it, speaking from an Indian Indian point of view. What is so gratifying is that the US & State attorneys were diligent in investigating this scam & indicting the parents & school officials. That makes us thrilled about the standard of morality & fair play in America & makes some Indians from India marvel & laugh simultaneously. Because in India, the Government attorneys would investigate such a scam but NOT to indict but to extract greater sums of money from parents & school officials.

We are not kidding. As we have been told, if you go to the Indian Police to file a case, the immediate calculation the police inspector makes is whether he is likely to get more money from you or the guy against whom you are filing the case. Lawyers are worse, we are told. Because your lawyer, after getting all the fees they can from you, often contacts the opposite party and asks how much they will pay your lawyer to weaken/throw your case. Is this all possible without even greater corruption in the judiciary? You decide for yourselves.

The point being we are thrilled to see US & State attorneys take action against the last & most corrupt bastion of elitism in America – the name brand Universities. They have been very smart in collecting champions in every field. Just look at how many Fin TV anchors in New York serve the interests of their schools rather than care about what their schools are doing to students & America itself.