1.”nothing bad, nothing horrible“

That was the reaction of Rick Santelli to Friday’s economic data. It wasn’t good data but, on the heels of Thursday’s PMI data, Friday’s news was not as bad. Also except for Treasury yields melting into broad & deep yield inversion, other asset classes are not showing serious R-concern, as the following chart published by @themarketear shows: 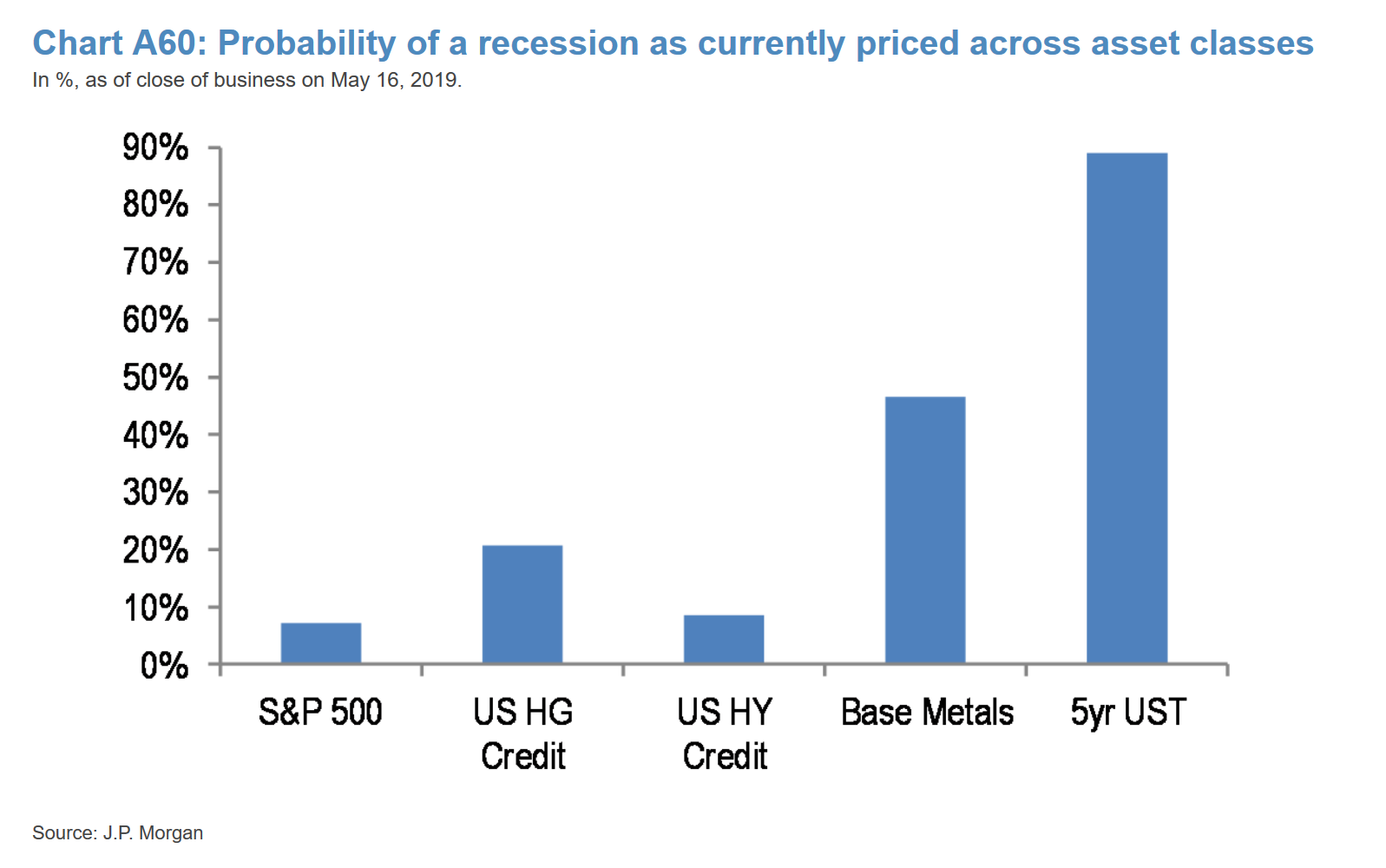 So the big question is whether the Treasury levels are ridiculously low mainly because of global yield hunger or whether the “resiliency” exhibited above by other asset classes is a repeat of the “resiliency” we all saw in the summer of 2007. Recall that year’s decline in other asset classes, especially stocks, came much later in the year. And by the time the Bernanke Fed realized the spreading weakness, it was too late to stop it.

Perhaps, the durables report was not bad or “horrible” because of inventory buildup, as the chart below published by The Market Ear shows: 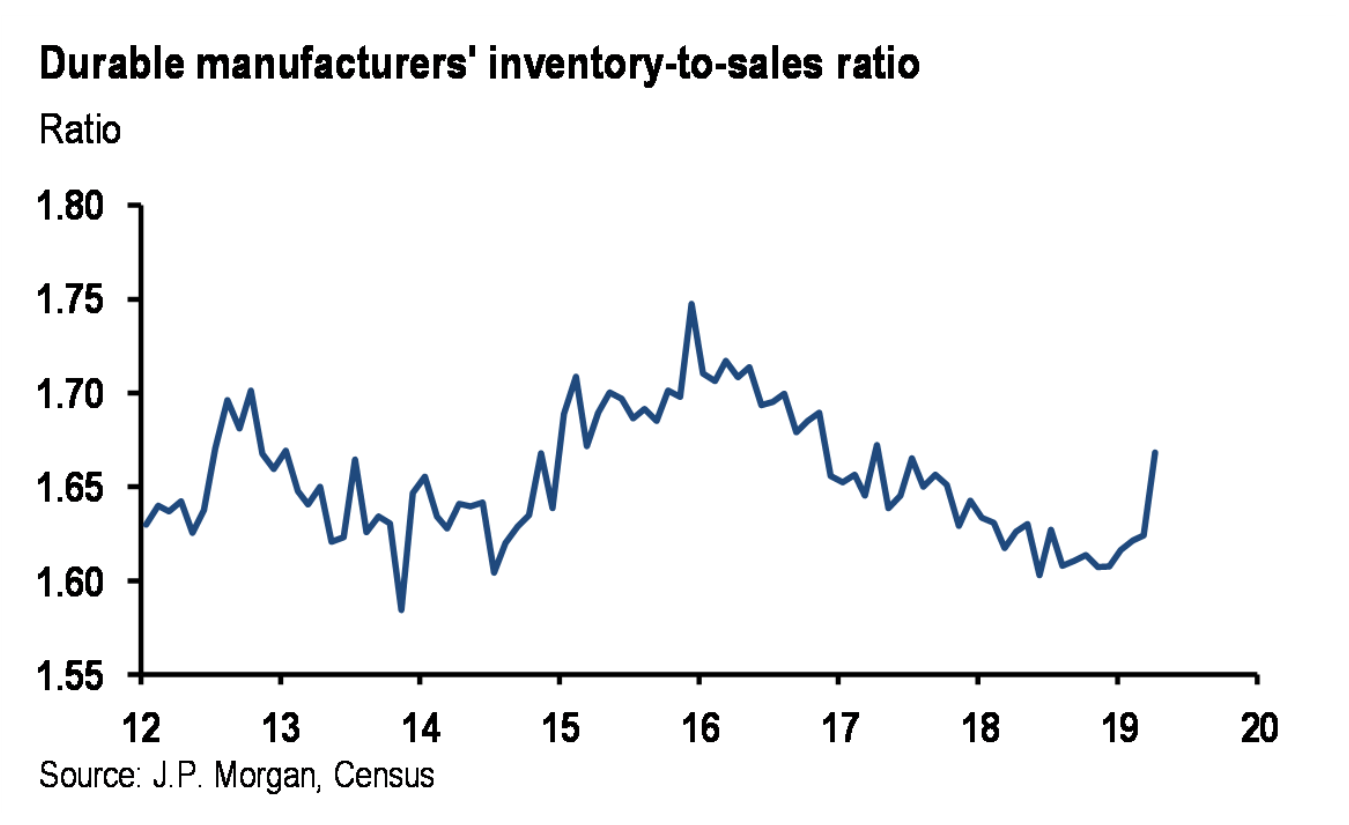 Is “dismal” less bad than “horrible”?

Looking at this via a G3 overview lens, 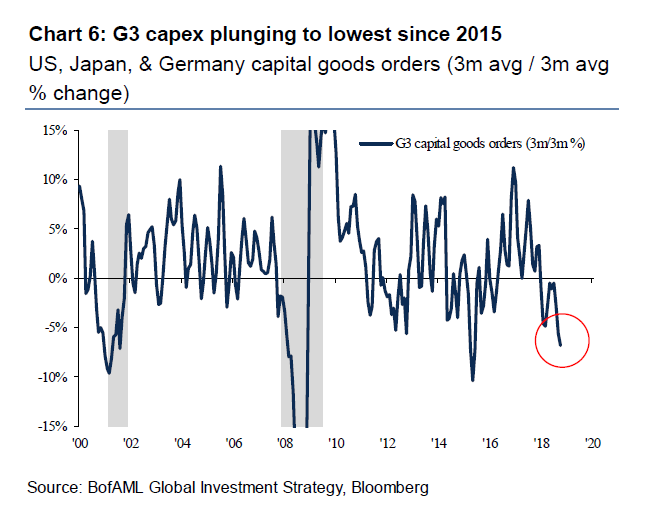 Forget G3 & all that big stuff. What about spending on home appliances that made Home Depot a secular growth stock? 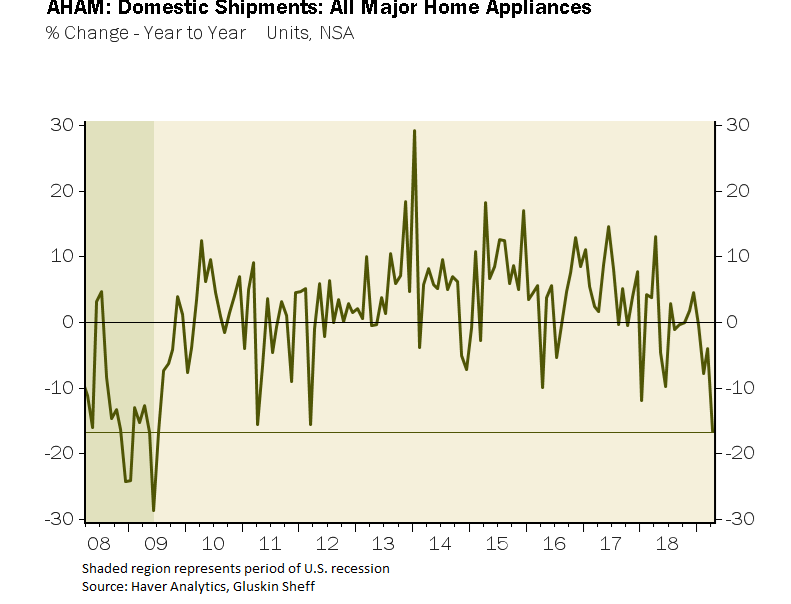 Yeah but, housing sales should be booming with collapse in 10-year interest rates, right? Not exactly: 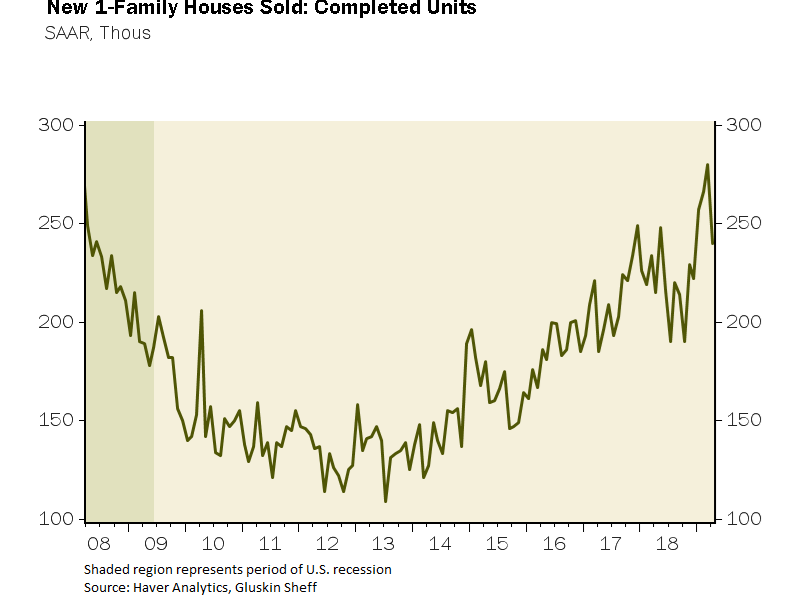 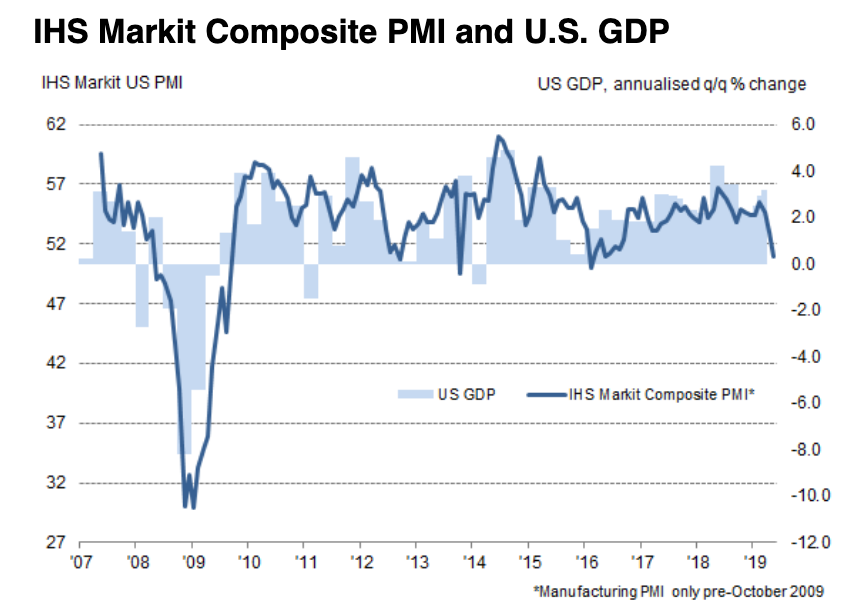 Well, that hits hard where there is little tolerance for pain! 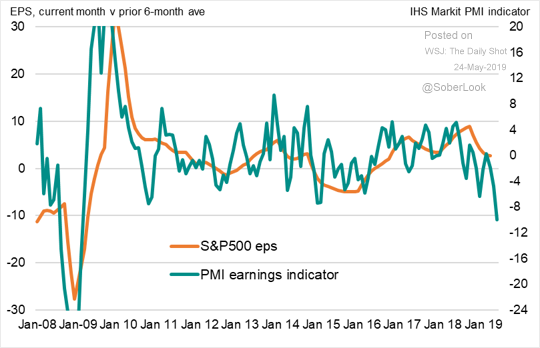 But what about the real indicator the Fed looks at as they tell us?

What is the “real” picture? Real meaning what people paint with real money, not just 2-3 or even 14 academics but the entire marketplace of investors: 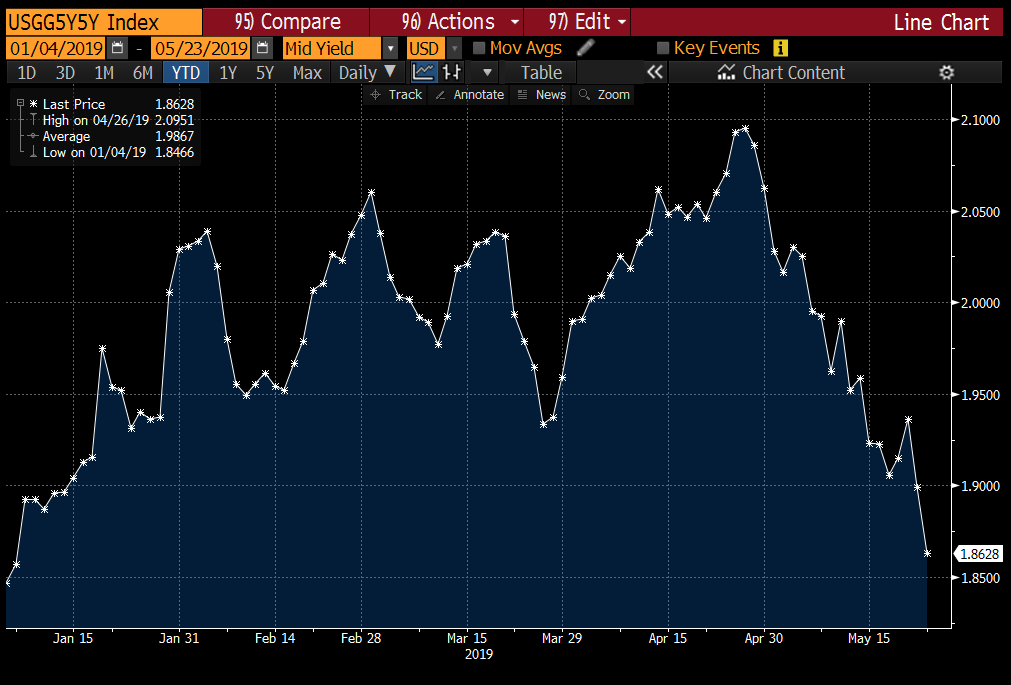 And this is the true story of the fall in Treasury yields – inflation expectations falling have driven yields lower. Meaning another fall in yields could be ahead of us if the US economy starts exhibiting slower growth.

But who would care? Not the see no slowdown, hear no slowdown, speak of no slowdown gang. Are we being unfair? Not really because the same blind, deaf & mute gang refuse to acknowledge the fall in inflation expectations. Not only that but they demand the all the market participants suspend their beliefs too! 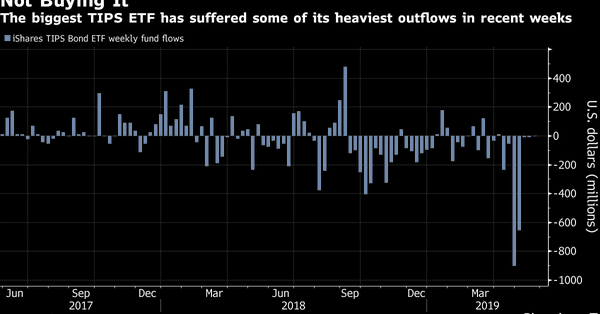 Remember Jay Powell’s presser in December and that ridiculous spectacle of Powell explaining the sacrosanct Fed model. That Powell seems to be back. not just Powell but the entire FOMC. Because they only see/hear/speak what their slow moving models tell them to. Of course, they are the Ph.D. experts while the Treasury market is stupid.

But the 3-month yield, even at this low 2.349% yield, is now higher than all maturities up to the 10-year yield which closed at 2.324%. Can the Fed spell INVERSION? Not until their Fed models spell it for them!

But Goldman Sachs seems to concur with the Fed that the market-based pricing of a Fed ease is excessive at least according to The Market Ear: 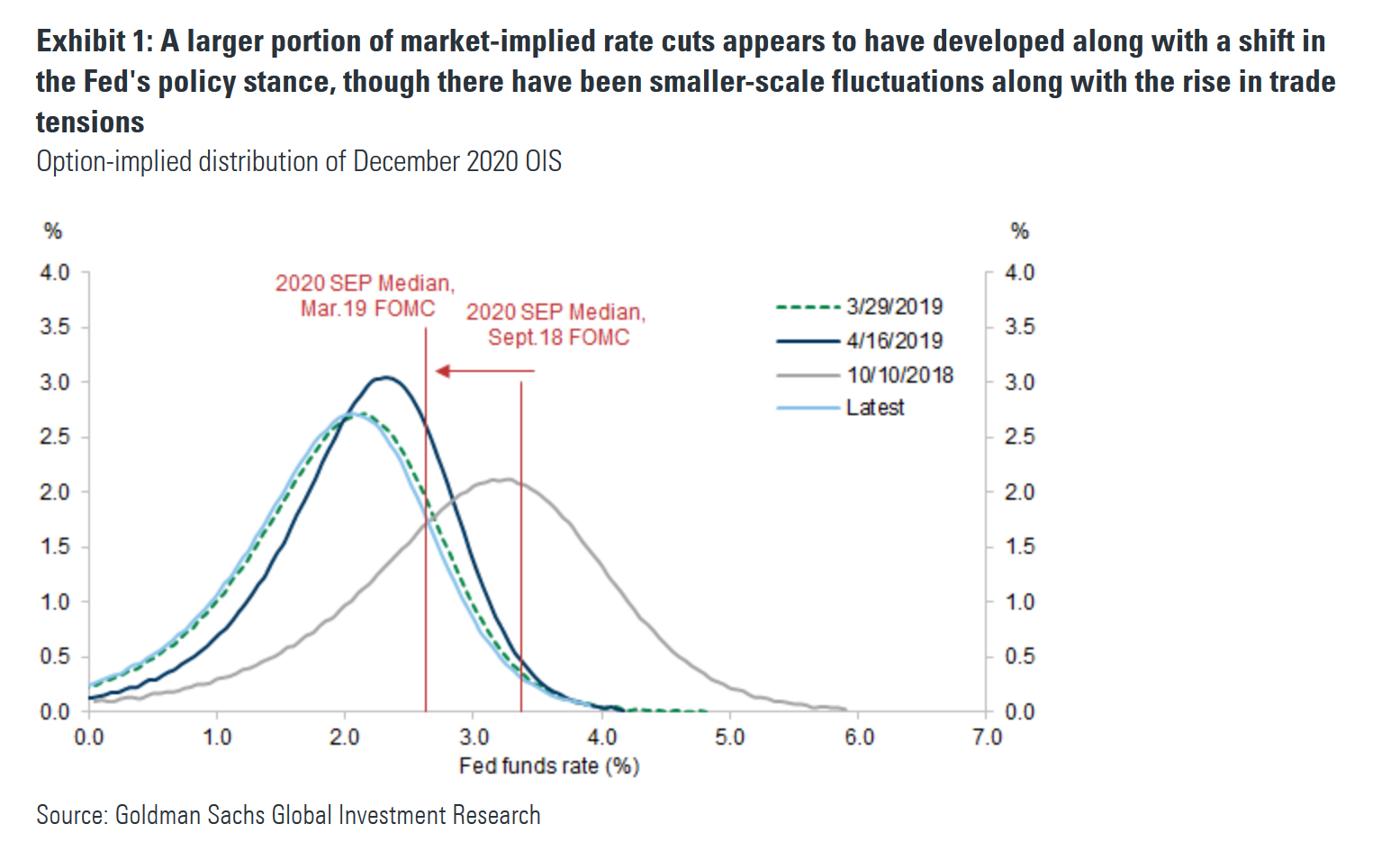 We have a simple question for the “infallible” Fed & the luminaries at Goldman Sachs – Has the economic & corporate data strengthened from late March to now? No, is our answer. So is it possible that Treasury rates have fallen once again because the Fed’s disbelief allowed the slowdown to marinate into the economy & make it worse?

If that is so, then would another rise in Treasury rates make the slowdown marinate some more & seep into more sectors of the economy or would such a rise in interest rates improve the housing market, improve rising credit delinquencies & improve corporate earnings?

Frankly, the Fed in its arrogant conviction in its “infallible” models doesn’t care. How do we know? Look at the Williams dismissal below: 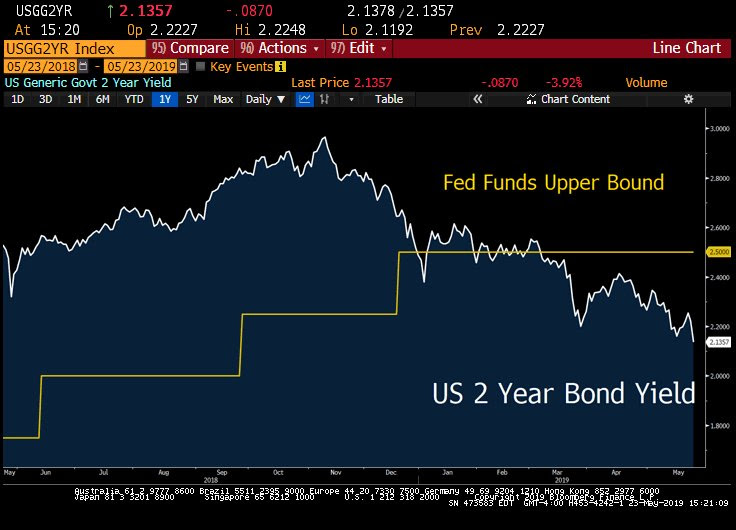 Hmm! We wonder whether Mr. McDonald remembers another head of a financial institution who refused both publicly & privately to believe what the bond market was saying about his firm! Didn’t that man end up causing a near meltdown of the financial system? Didn’t some one write a book about that titled A Colossal Failure of Common Sense?

Wait! That author was Lawrence McDonald. So if the Powell Fed actually creates a recession in America because of their arrogant conviction in their “infallible” modes, then Mr. McDonald could write a sequel about Powell’s colossal failure of common sense. It would make a sad but interesting read.

The inflows are something to see, courtesy of the Market Ear: 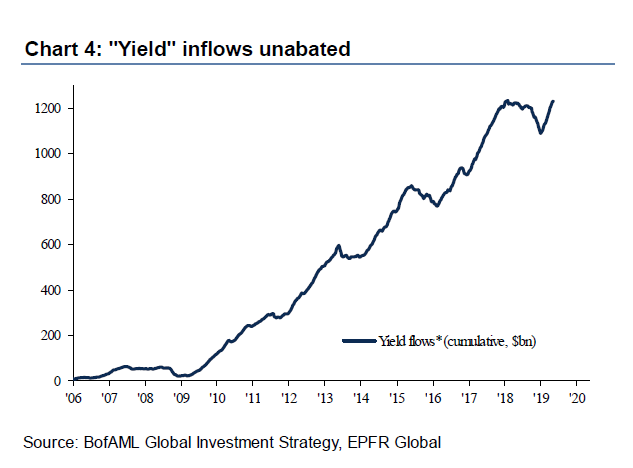 But what has been impact of these inflows on positioning? 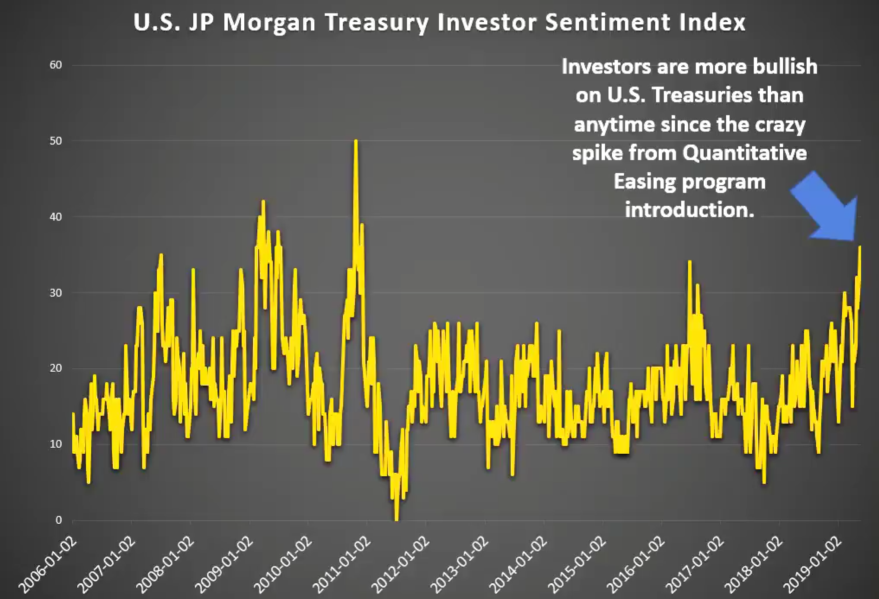 But is the Daily Sentiment Index for Treasuries also at an extreme?

And the 10-year yield has reached the 2.32% target established weeks ago by a brave & now proven correct guru: 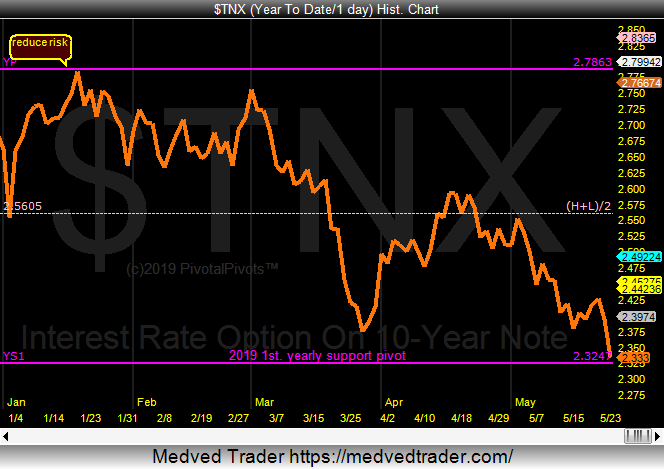 But what if the Fed doesn’t lower rates? Doesn’t the overnight rate of 2.50% rein in the fall in the 10-year rates & especially the 2-year rate? In that case, what might be some targets in the near term?

Anne Mathias of Vanguard said on BTV that she thinks a target for the 2-year yield is 2.14%; she said the limit for the 10-year yield is a little below 2.30%, perhaps 2.25% until the end of June when the tariff situation should become clearer.

But we have a lot of data coming in before the end of June including the Non Farm Payroll number in 2 weeks & the FOMC meeting the week after.

That data will probably tell us whether this past week’s exuberance in Treasuries was rational or not so rational.

Sadly, this week became the first time since 2011 when the Dow closed negative for 5 straight weeks. Not just that, but  Lawrence McMillan of Option Strategist, sounded more cautionary in his Friday’s summary: 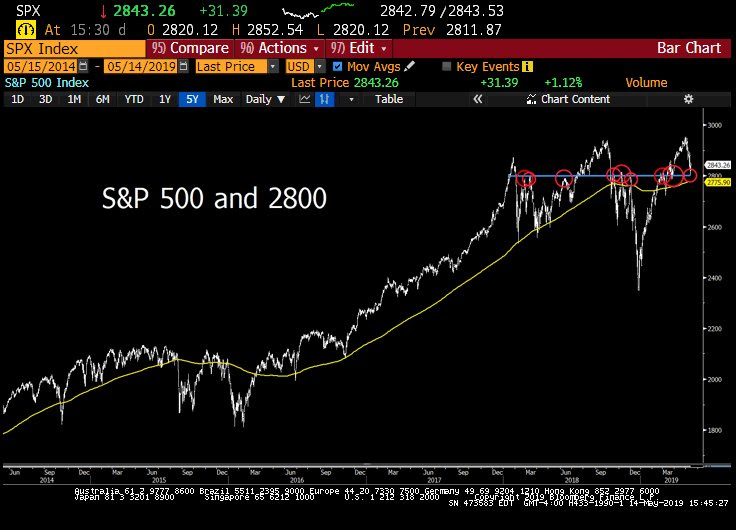 Any input from a DeMarkian? 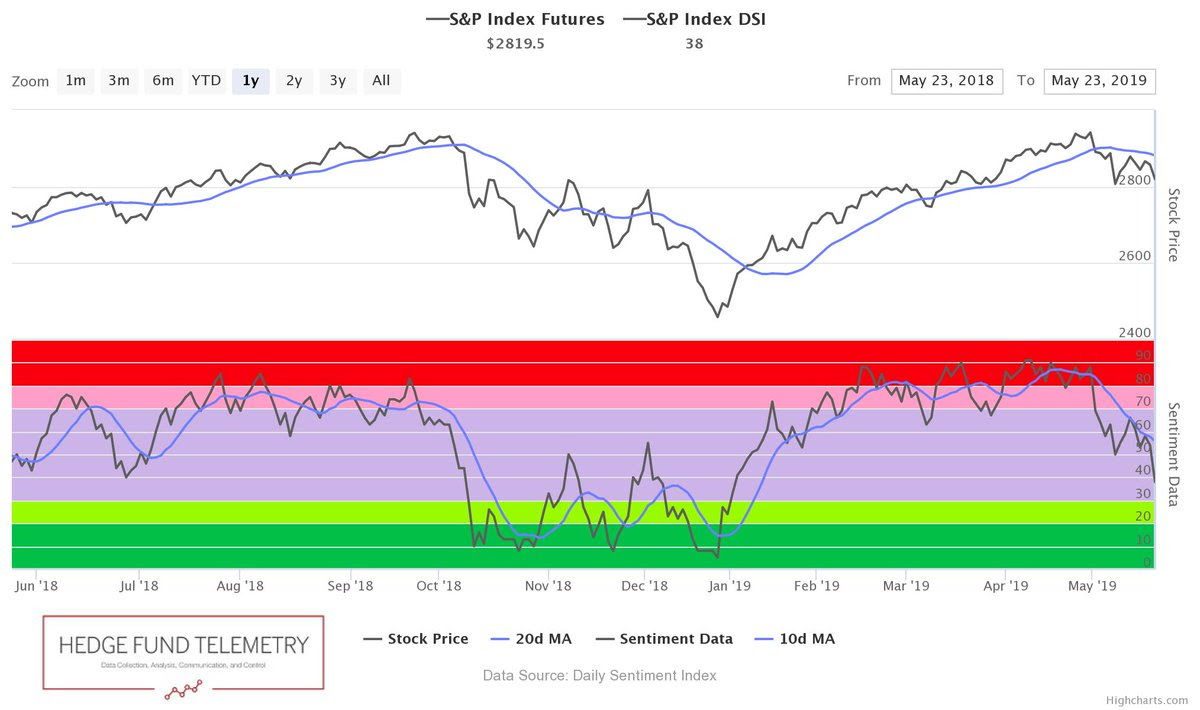 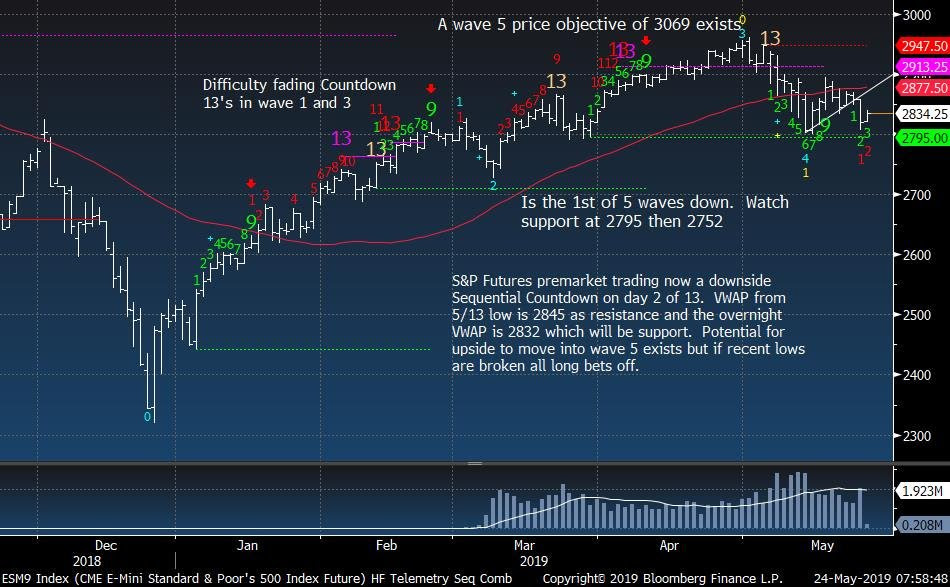 Since 2800 is only 26 handles away, wouldn’t it be wiser to wait to see what happens next week instead of opining now? But we can always speculate about the long term. In that spirit, below are 2 references to 2007-2008 with completely opposite outcomes: 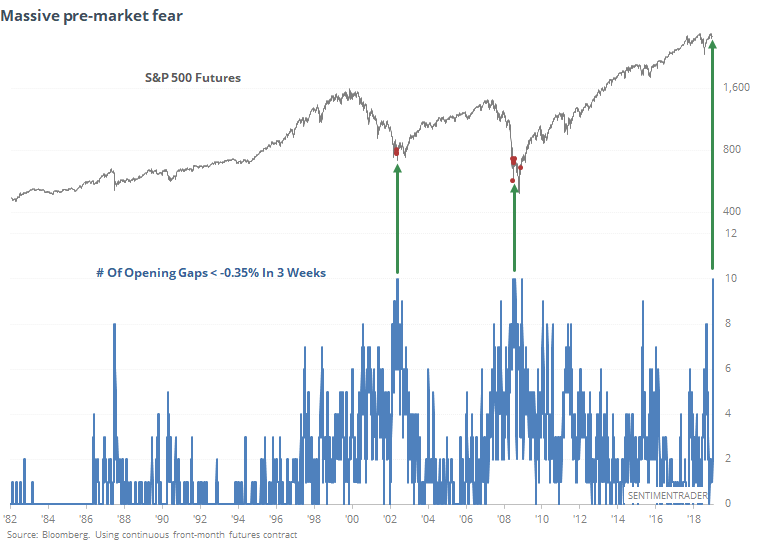 It all depends on how quickly & how effectively the Fed cuts interest rates. That has been our core conviction since the beginning of 2019 & that conviction is getting strengthened with every month’s data.

5. Emerging Market Unlike Most

Our last week’s article focused on the sell offs in Emerging Market Stocks, Currencies & even Bonds. EEM was down 4% on the week that ended May 16; EWZ was down almost 8% and EWY was down almost 4%. But one emerging market was unscathed that week.

We had noticed that but kept mum to avoid jinxing the election results announced this week. The Indian electorate demonstrated to the world that people don’t have to be of the right skin complexion, social status, educational credentials to vote in their best interests. That is why Electocracy works & none works better than the Indian electocracy.

The biggest free electorate in the world rose to its challenge and delivered an even greater victory to Prime Minister Narendra Modi, a victory even greater than the one in 2014. PM Modi won 303 seats this week, more than his 282 wins in 2014. His NDA coalition won 348 seats compared to 336 seats in 2014.

The Indian Sensex exploded up by 1400 points last Monday because of stunningly positive exit polls and the actual victory was even greater than the polls.Those who sold ahead of the election have been left by the way side.

The story of India is a huge set of people getting progressively higher incomes. And the best way to participate in its is in a Buffet-like way – by compounding returns from basic consumer demand stocks held for decades. Gundlach is absolutely correct when he says buy broad Indian ETFs and hold them for your grandchildren. They will remember you even more fondly.

And as the President said, 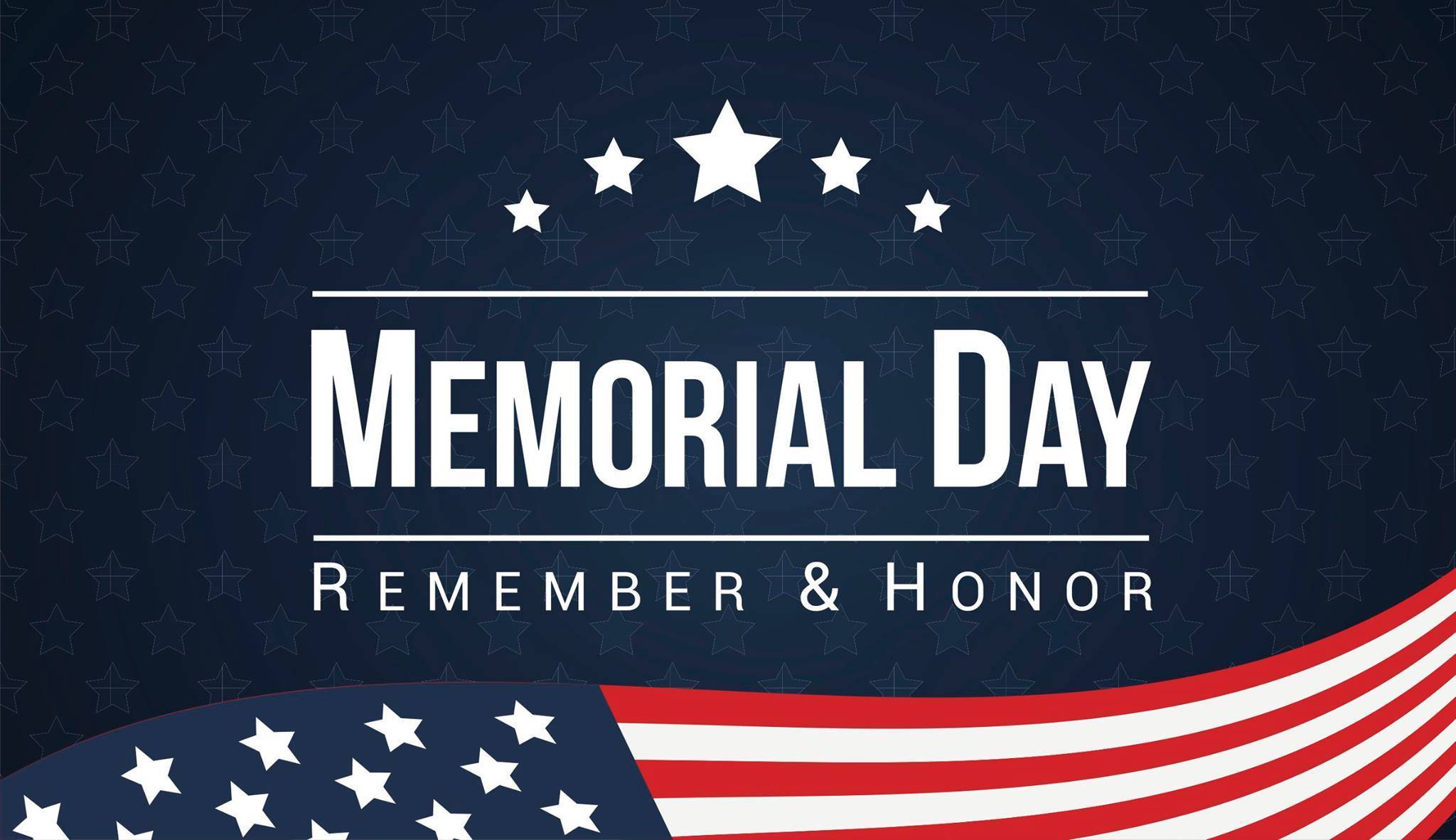