Two weeks ago, MS QDS (via Market Ear) argued for a “15% to 20% counter-trend rally over March month-end”. We got it.  Then last week we learned from this duo that

Once again, they proved correct at least for last week.

Monday, the day before quarter end, was a big up day. Almost everything we like to see the markets showed on Monday. Stocks up big, Treasury yields down, credit up, leveraged bond CEFs (closed end funds) outperformed unleveraged funds. Tuesday gave back some of this.

But Wednesday was brutal. During the last 11 years, the first day of a month was always up as people added to their 401Ks & reallocated to stocks. This Wednesday seemed just the reverse. Dow fell by 973 points, S&P fell by 114 handles, NDX fell by 327; Treasury yields went down hard & Treasury ETFs were up 2% while high yield ETFs & Munis fell by 2.5%. And yes, leveraged CEFs fell far worse than their bond ETF counterparts. A “very decisive 90% down day“, as Lawrence McMillan of Option Strategist called it.

Look what Lawrence McMillan wrote in his Friday summary:

So was last week just a counter-trend move in the Dollar?

The semi-parabolic move in the Dollar is such a sign of fear-based liquidation. The reversal of 50% of this March move in the last week of March seemed such a good sign, especially when combined with Fed establishing swap lines with just about every foreign central bank.

But the Dollar rallied by 2.5% this past week. This is just poison for the global economy, as Larry McDonald of Bear Traps Report pointed out on Friday afternoon:

How bad was the damage in March? 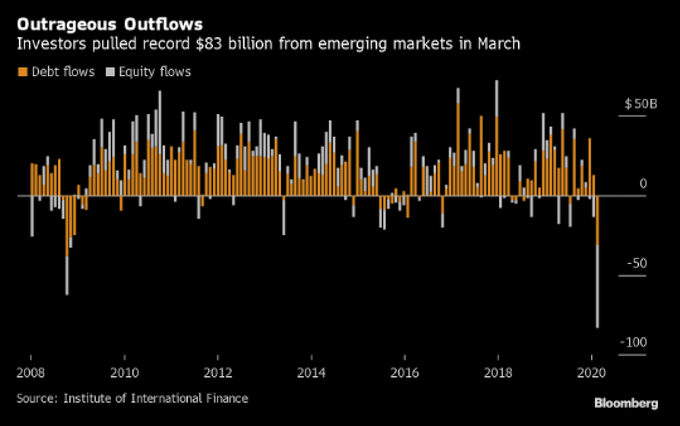 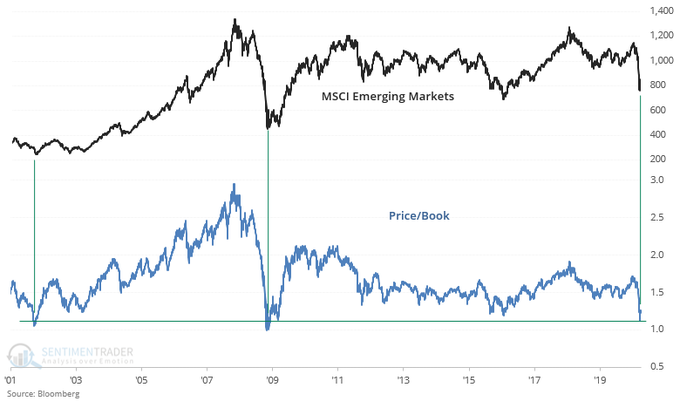 This is not just for non-domestic investor. The last thing the Fed needs is a EM Debt crisis given what they are dealing with near disasters in two different parts of the US Fixed Income market.

As we all know, the market plunge in America was amplified by the Saudi Roulette action of MBS of Saudi Arabia. It was clear to most geopolitical observers that Saudi Arabia was playing a losing hand. It became obvious to all this week. Look at the chart produced by Larry McDonald of Bear Traps Report: 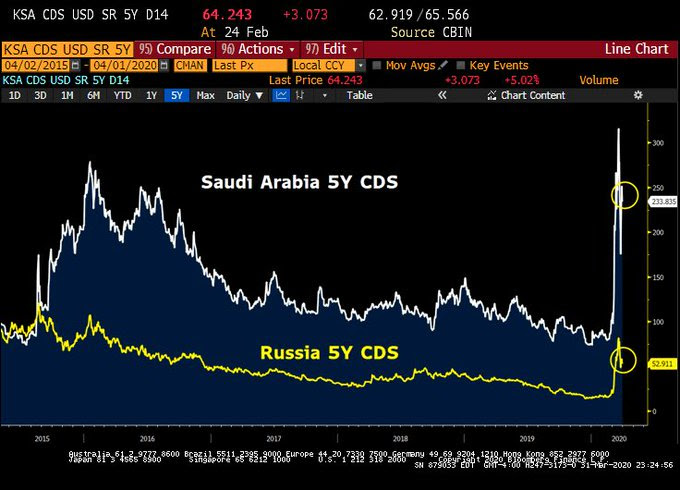 Remember last week’s exhortation of Scott Sheffield of Pioneer Natural Resources – “we need Trump to do something”. Look what happened on Thursday, April 2: 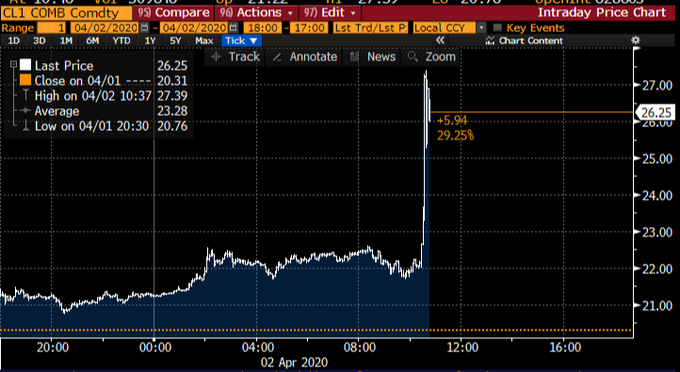 What could be going on might actually be described as the structure of a new UROPEC, meaning the addition of US energy industry to Russia & Traditional OPEC with US, Russia & Saudi becoming the big voices. Look what Geopolitical Futures wrote this week:

The drive to impose protectionist measures has gained momentum after tapping Rick Perry, (recently departed energy secretary & ex-Gov of Texas) to lead the effort. According to a detailed FT article – “Perry’s starting to turn the tide — he has an understanding of what’s going on and deep ties to the Midland crowd,”

Who would have thunk a decade ago that some one like Gov. Perry would actually say what he did on Fox, that

According to the FT,

Remember what Scott Sheffield said last week that the real war within US is being waged by Oil majors against the independent shale producers. Look what the FT wrote:

Looking a bit into the future, we can’t help thinking that better days might be here for Russia & a more mutually beneficial US-Russia relationship might be a possibility. Look Rosneft just left Venezuela.

Bringing an upward stability to oil & to US shale industry would be welcomed by a large segment of the US high yield market.

The Fed action to reduce the federal funds rate from 1.75% to 0.25% was widely praised & it was done with the best of intentions.In addition, the Fed & the Treasury have spoken for forbearance for homeowners from making their monthly mortgage payments. In addition, Fed’s announced QE includes buying mortgage backed securities, same securities used by mortgage lenders & servicers to hedge their risk.

Unfortunately these Fed actions have backfired on a very big area of fixed income, an area that affects 20% of US GDP. Just look at the chart of Annaly Mortgage, (a stock that has been mentioned in the past by both Jeff Gundlach & Jim Cramer), vs. IEF, the 7-10 year Treasury ETF.

Remember the plight we described of 65 independent shale oil producers last week. In contrast, there are over 500 MBS services that might be in colossal trouble. Remember the banks get paid to originate mortgages but not to CARRY them.

Ex-Secretary & Ex-Governor Perry is leading the effort to help independent shale companies. Is there any ex-secretary or ex-Fed governor doing anything to help mortgage servicing sector? Isn’t housing a bigger nationwide sector than oil production?

Given all this, shouldn’t we be praying for Treasury yields to rise? Above we described the rally in the Dollar as parabolic? What is worse than parabolic? Something with an infinite slope: 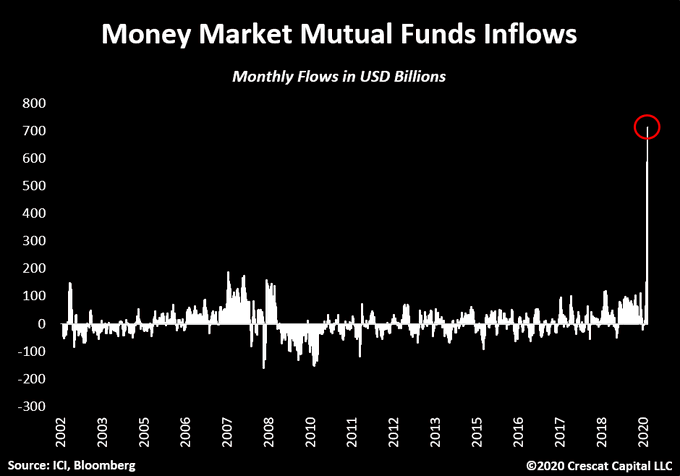 Finally, how many people are juggling with something like this depiction by Nishant Choksi in WSJ or worse doing a conference call like this? 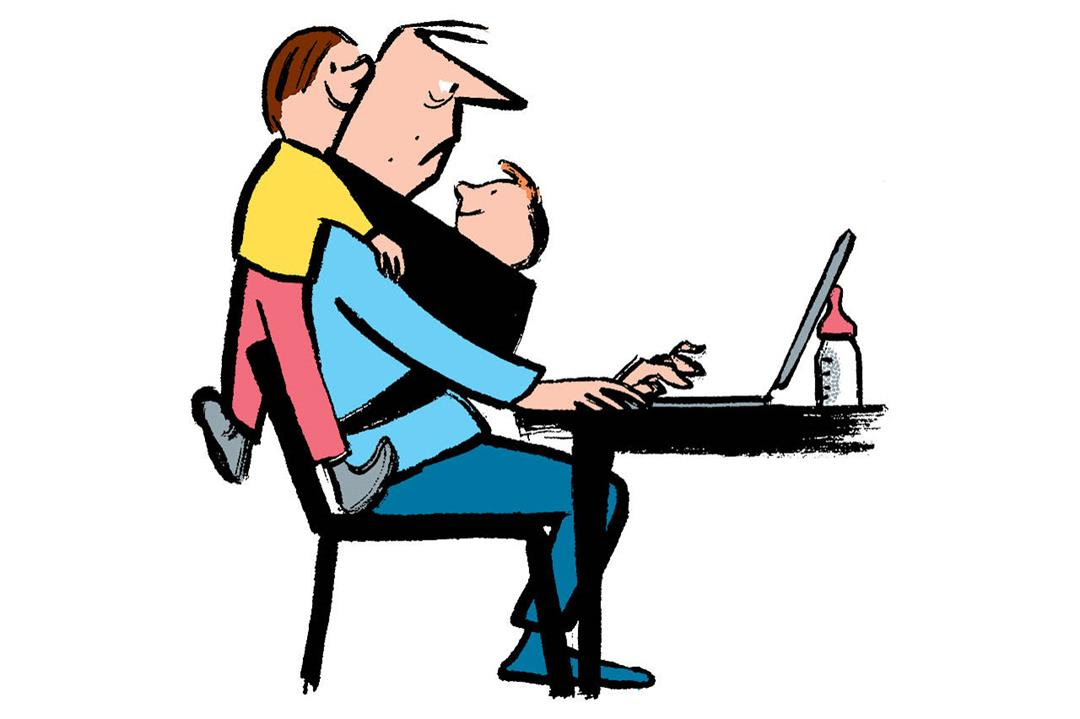 There is only one aspect missing in the above from our Gender Equality viewpoint – a woman doing the same in an adjoining room. Life for a single parent with a job was always difficult. Now it must be incredibly difficult.